Technopark of the Sobyaninsky period: the "Perm group" of the capital's government met with Pavel Te at Pharmstandart

What do Viktor Kharitonin, Pavel Tyo and Maxim Reshetnikov have in common?

In the project for the construction of a technopark for Pharmstandard, new interested parties may have appeared. Among the latter is the family of the ex-head of the Moscow Investment Policy Department Sergei Pakhomov, who represent the "Perm clan" of the Moscow government.

In the construction of a technopark in the North-East of Moscow on Vilnius Street, for the pharmaceutical giant Pharmstandard Viktor Kharitonnin, whose interests are traditionally associated with the interests of Deputy Prime Minister Tatyana Golikova and her wife Viktor Khristenko, the interests of almost the entire construction business elite of the capital converged.

The structures of Pavel Tyo, as well as representatives of the team of Sergei Sobyanin, through the former governor of the Perm Territory, and now the head of the Ministry of Economic Development Maxim Reshetnikov and his people, will master money and territories. In addition, the possible interest of representatives of the administration of the Governor of the Moscow Region Andrei Vorobyov can also be traced there.

The correspondent of The Moscow Post figured out who and how can "warm hands" on the project.

The possible interest of Sobyanin's team became known just recently. The Starprofi company, among the beneficiaries of which Pavel Tyo's Capital Group is located several steps later, has acquired a remarkable partner - the owner of Glavpromstroy LLC Pyotr Shatrov. 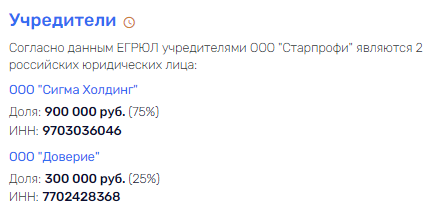 It is Starprofi that will build up a technopark in the North-East of the capital. Now the company owns 75% of Sigma Holding LLC, among the co-owners of which is German Te, the son of the founder of Capital Group Pavel Tyo. Another 25% of the structure since June 21 belongs to LLC "Trust" - the amount of the transaction for the redemption of shares is unknown.

LLC "Trust" is 100% owned by Pyotr Shatrov. The company was registered back in 2018, but until now it was in sleep mode - it did not conduct any active activity, it has no employees on staff. Perhaps it was created for some such major project.

And if everything is generally clear with the structures of Pavel Te and the Pharmaceutical Standard of Viktor Kharitonin, then what about Sobyanin and Vorobyov? We explain.

Pyotr Shatrov is not just an entrepreneur, but a partner or former partner of people from the team of the above officials. One of its main assets is Glavpromstroy LLC (GPS), where it has 99%. At the same time, the company is a large recipient of state contracts - it has already gained 10.3 billion rubles. 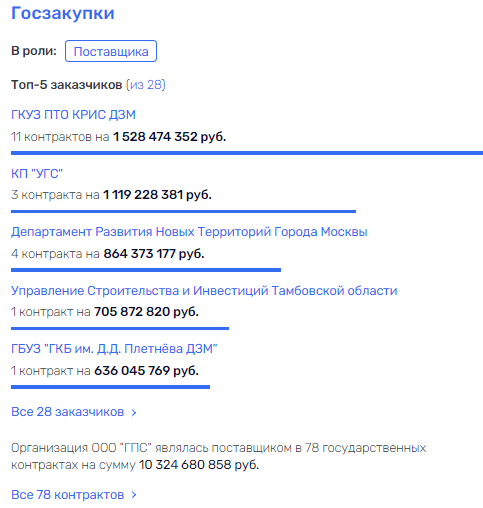 Moreover, almost all of them are with the structures of the Moscow government. In first place with an indicator of 1.5 billion rubles, the now liquidated GKU "Production and Technical Association of Overhaul and Construction of the Moscow Department of Health." In April 2019, it was annexed to the GKU "Directorate for the Development of Healthcare Facilities in Moscow."

Already one such pool of contracts from the mayor's office suggests thoughts of a possible patron under the wing of Sergei Sobyanin. But another is more indicative.

Earlier, Shatrov's partner in Glavpromstroy LLC was Sergey Pakhomov, the former head of the Ministry of Construction of the Moscow Region (2015-2017). A man from the team of Andrei Vorobyov, who was appointed to his post.

Moreover, Pakhomov left the capital of Glavpromstroy LLC not so long ago, only in 2021. Instead, part of the stake was owned by a company similar to a "dummy" - JSC "NPK Forum," which is not clear to whom it belongs. 100% of the shares were held by the now liquidated Ovik Stroy LLC. The market suggests that Pakhomov may also be hiding behind NPK Forum JSC - he simply does not want to "glow."

Recall how Pakhomov lost his post as head of the Ministry of Construction. He had a deputy Yevgeny Sklyarov, who was appointed to him. In 2017, he turned out to be a defendant in a criminal case - the investigation tried to incriminate him to restrict competition using his official position, which caused major damage to the victims, but at the same time could bring large income to interested parties (paragraph "a" and "c" of Part 2 of Art. 178 of the Criminal Code of the Russian Federation). Kommersant wrote about this.

Interestingly, the court did not take him into custody, and how the case ended is unknown, there is no evidence that Sklyarov was found guilty and convicted. 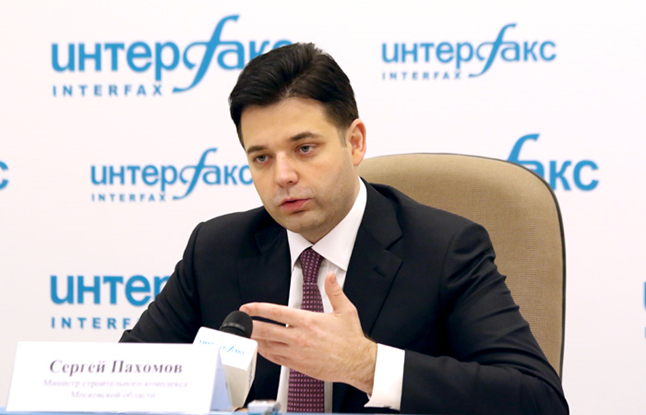 Sergey Pakhomov - a "shadow" partner in the construction of a technopark for Pharmstandard? Photo: Interfax.ru

But it is important that Chief Sklyarova, Pakhomov, resigned from the Ministry of Construction at the same time, in 2017, after him. And then they said that the security forces could come for Pakhomov, and Sklyarov escaped arrest, allegedly due to the fact that Andrei Vorobyov could say the word for him.

Another partner of Peter Shatrov is no less, and maybe more interesting, and can lead to the team of Moscow Mayor Sergei Sobyanin. Mr. Shatrov is the founder of Bityugov Bereg LLC, which is engaged in animal husbandry in the Voronezh region. And in his partners, on a parity basis, Vladimir Borisovich Prokhorov is a native of Perm, a former law enforcement officer, and then a media manager and businessman. 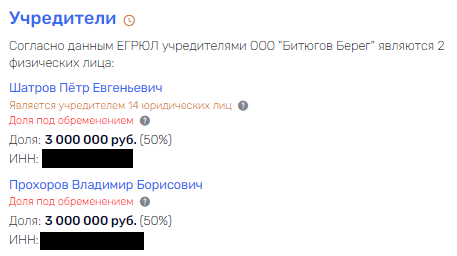 The shares of both partners are pledged, and not with anyone, but with Solidarity Bank. And this bank is almost 50% owned by the Moscow government. Is it possible to think that loans to Shatrov and Prokhorov were issued on a common basis with other partners, and there is no conflict of interest here?

This department, among others, was supposed to coordinate the project for the construction of a technopark on Vilnius Street - like any other large industrial and logistics facilities in the capital.

Judging by the information service "Rusprofile," after the dismissal, Prokhorov Jr. has not yet got a job. But from the affairs of the past, we easily find him as part of the co-founders of the Perm company Intech, where, along with his father Vladimir Prokhorov, he was his partner... Kirill Sergeyevich Purtov is the current head of the Department of Economic Policy of Moscow. 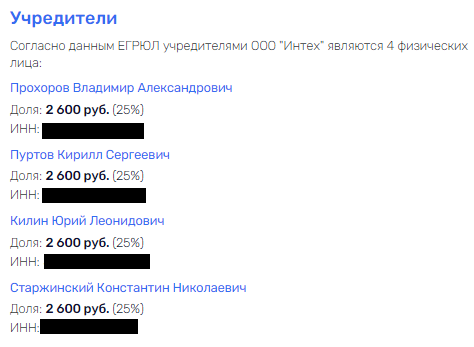 We will remind, earlier Maxim Reshetnikov himself worked in this post, before he went to work as the head of the Kama region. And they worked together in the administration of the former governor of Prikamye Oleg Chirkunov. And no conflict of interest and nepotism! Is the circle closed?

By the way, even before that, Purtov was two years head of the Department of Urban Property (DGI), one of the most corrupt departments in the mayor's office. Where he could get, again, under the patronage of his longtime acquaintance Maxim Reshetnikov.

Rumor has it that now the chair under Mr. Purtov is swinging. And it would be nice for him to come up with a warm place to earn money for a comfortable old age. Is the technopark project for Pharmstandard an ideal opportunity to earn extra money?

They started talking about a possible threat to Purtov's career in April 2017, when his right hand, Leonid Kostroma, deputy head of the Moscow Department of Economic Policy and Development, was in the hands of law enforcement officers. He was suspected of receiving a multimillion-dollar bribe of 3 million rubles.

Allegedly, for such an amount, Kostroma promised to "issue" a contract related to the improvement for the head of the department of the Moscow City Investment Management Agency. 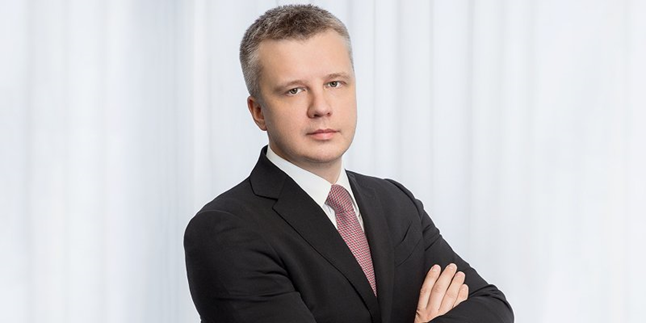 Kirill Purtov is preparing for himself a comfortable old age under the "cover" of Sobyanin and Reshetnikov? Photo: Mos.ru

But is it possible to believe that Kostroma could have done this without the knowledge of his boss, and was not going to bring him in case of success? Only the investigation can answer these questions.

It turns out that a variety of forces and teams could fly to the project for the construction of the technopark - representatives or former representatives of the teams of Sergei Sobyanin, Andrei Vorobyov, the scandalous developer Pavel Te and actually Pharmstandard Viktor Kharitonin himself. The latter can be tried to trace the possible interest of Deputy Prime Minister Golikova.

And there is no doubt about the profits in the future technopark. At the same time, it is hypothetically possible to profit at the stage of approval and construction.