Former Health Minister Tatiana Golikova, who received a nationwide "love" for her addiction to a dubious flu medicine, gathered the most scandalous pharmacists under her "banners".

The day before it became known that 7 medicines were registered at once by Petr Bely’s Promomed. Though Viktor Kharitonin's Pharmstandard, Vikram Punia's Pharmasintez and Alexey Repik's R-Pharma Group of Companies are already operating in this market, experts are not surprised. After all, there has long been talk that they are all favourites of Ms. Golikova.

By the way, Promomed Rus LLC, the structure of the Promomed GC, has applied not only for the registration of 7 cancer medicines, but also three medicines for the treatment of HIV. Prior to that, Mr. Bely was the main shareholder in the Biohimik plant, where he and his other partner Shvetsov specialized in the production of antibiotics. As the network media Stolica-S wrote, the general director of this plant Shvetsov allegedly issued a Chinese antibiotic for a Russian one and even managed to get almost half a billion rubles from the federal budget for the "new development". By the way, Promomed also promises to produce new medicine in Saransk.

At the first stage, Promomed intends to produce medicines from imported substances, but in the future the company promises to establish the production of its own ones. And then the anecdotal story with the release of a domestic medicine on the same Biohimik immediately comes to mind: Peter Bely, together with his partner Denis Shvetsov, "charmed" not only the governor of Mordovia... What is the result? Instead of domestic development, they slipped a substance from China. Is it possible that such medicines are made under the strict supervision of Tatiana Golikova?

The  correspondent of The Moscow Post studied the grim medicine situation in the pharmaceutical market.

In June of last year, 2020, the case of the former general director of the Biohimik company, which seems to be going to produce several new medicines, Denis Shvetsov, thundered.

The criminal case against Shvetsov was considered by the Proletarian Court of Saransk for 7 months. Mr. Shvetsov, who headed the company from March 2015 to August 2016, was charged with three counts of major embezzlement and embezzlement of property.

The state prosecution requested 4.5 years of a general regime colony for Denis Shvetsov. As a result, they gave 2 years. By court order.

However, evil tongues claim that the main shareholder of Biohimik, Petr Bely, allegedly "drowned" Mr. Shvetsov. That is why the criminal case "fell" on Mr. Shvetsov's head. This was reported by Kommersant. 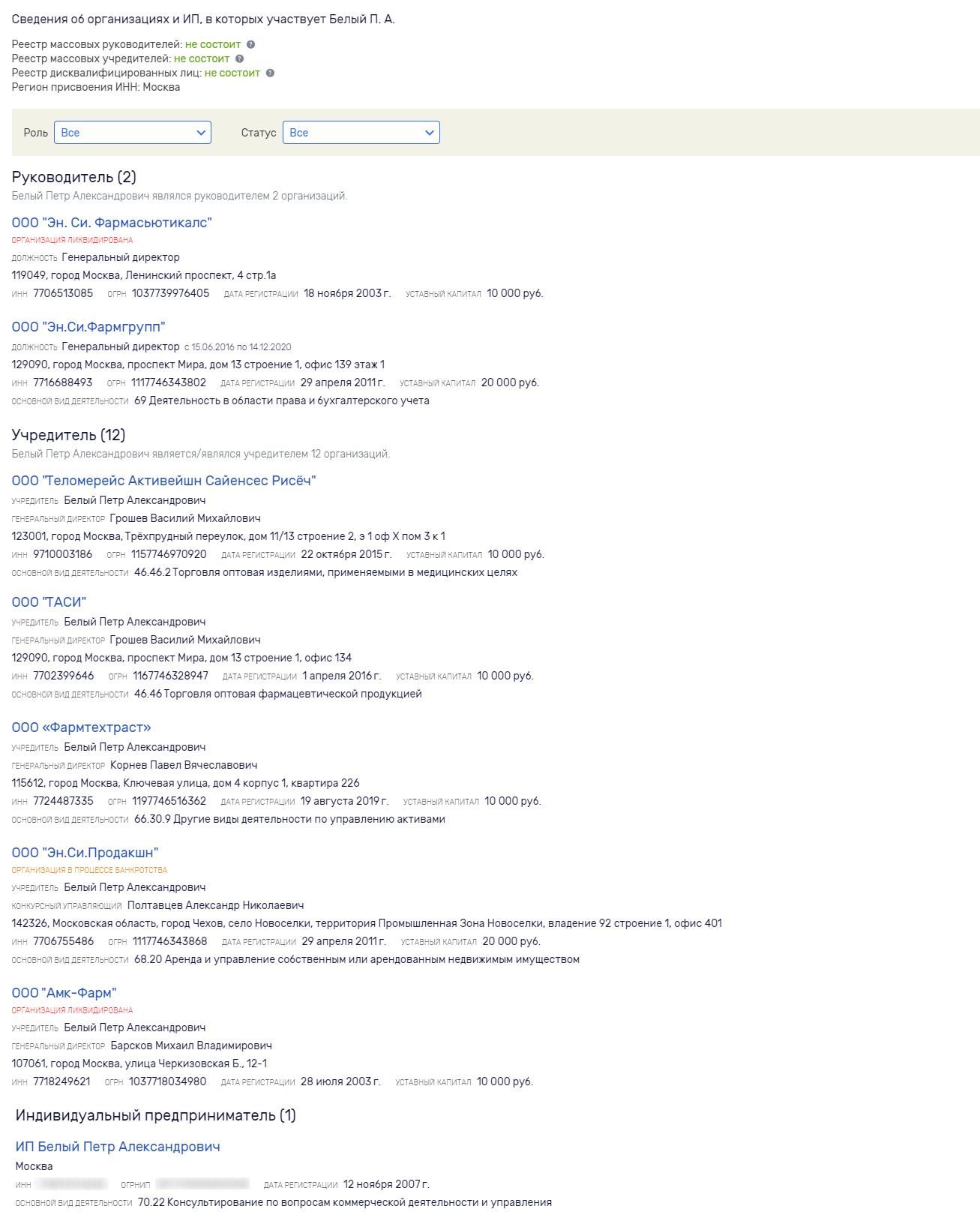 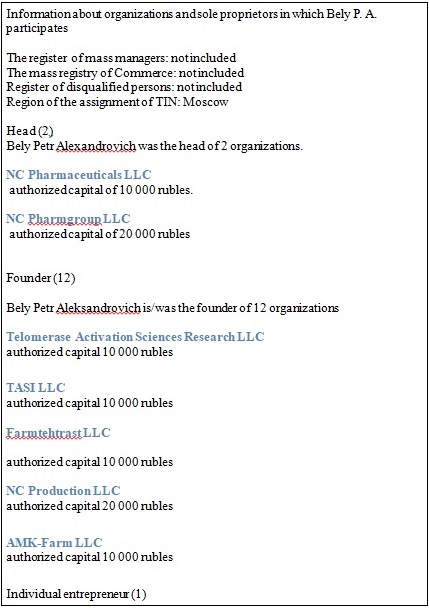 Petr Bely seemed to want to take over the shares of his business partner. Denis Shvetsov conducted arbitration disputes with Bely over the shares of several companies in which Shvetsov himself was the founder. It's about N.C.Pharm, N.C. Production and N.C PharmGroup. 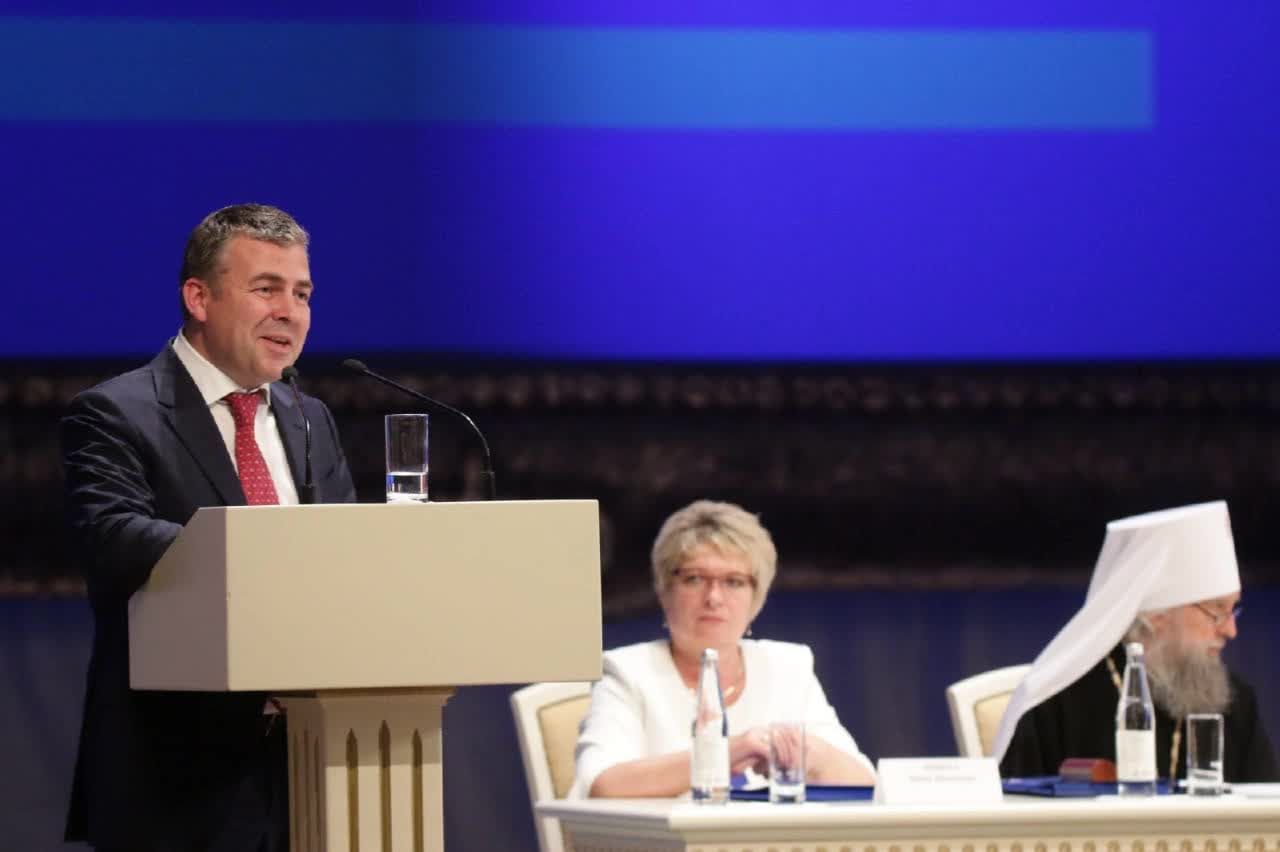 While Shvetsov was on trial, journalists unearthed an even more surprising story about how Denis Shvetsov, together with Petr Bely, produced the Russian antibiotic Vancomycin as part of an import substitution program.

The agreement on the establishment of the Antibiotiki production and engineering centre on the base of Biohimik was signed in 2016 during the visit of the head of the Ministry of Health of the Russian Federation to Saransk (at that time) Veronika Skvortsova.

This "sweet couple" received half a billion rubles for the development. Vancomycin is an antibiotic called the "medicine of last hope". It is able to fight super-resistant bacteria, those that have learned to overcome the resistance of other antibiotics.

And allegedly in the summer of 2017, Saransk has already received the first domestic substance of Vancomycin.

But this miraculous antibiotic has not appearred in pharmacies. It is not included in the list of medicines produced by Biohimik.

In the state register of medicines, Vancomycin from the Biohimik company appeared only in August 2018 (the owner of the registration certificate is Promomed Rus LLC). However, the pharmaceutical substance of this medicine originates from China. The supplier is Livzon Pharmaceutica. 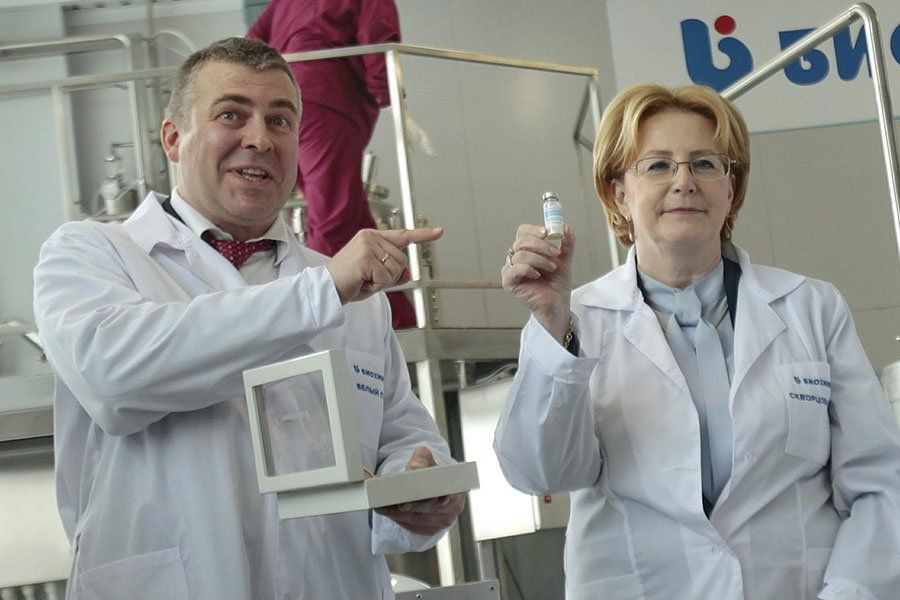 Can this really mean that at Biohimik, the shareholders of which are Petr Bely and Denis Shvetsov, they simply gave out a Chinese medicine for a Russian antibiotic?

But where is the half a billion rubles from the budget?

All roads lead to offshores?

Another company that was allegedly involved in the production of Vancomycin is Promomed Rus. LLC. It is 100% owned by Promomed Holdings (Cyprus) Limited. And the ultimate owner is Petr Bely.

But evil tongues claim that Mr. Bely is a figurehead, and all these riches are allegedly owned by a certain Maxim Yakushkin. His role in the dark pharmaceutical business is still to be discussed…

But for the public - the main owner of the Biohimik plant and concurrently the main figure in the company is Petr Bely.

There is also a curious fact: the Biohimik plant was part of the SIA International company owned by Igor Rudinsky, who before his death allegedly agreed to sell it to Alexey Repik’s R-Pharm GC.

Alexander Vinokurov, the son-in-law of Foreign Minister Sergei Lavrov and the head of A1, allegedly showed a keen interest concerning the plant in Saransk. But in the end, the Biohimik company became the property of Denis Shevtsov and Petr Bely (and Maxim Yakushkin, apparently).

And if Shvetsov has already been noted for a high-profile criminal case with embezzlement and sale of assets to the left, then Mr. Bely became known to people in uniform even earlier, in the unforgettable 90s, when he was put on a special account for currency fraud. This was reported by Sobesednik.

Does Ms. Golikova, who oversees the social sphere in the Government of the Russian Federation, not know about the criminal adventures of her likely favourites?

However, perhaps the attention of the official is not enough for everyone, is it? After all, for more than 12 years, Ms. Golikova has been gently taking care of the "king of state orders" Alexey Repik. It was when Golikova was a minister that Repik’s company began to receive state orders under the Seven Nosologies program. 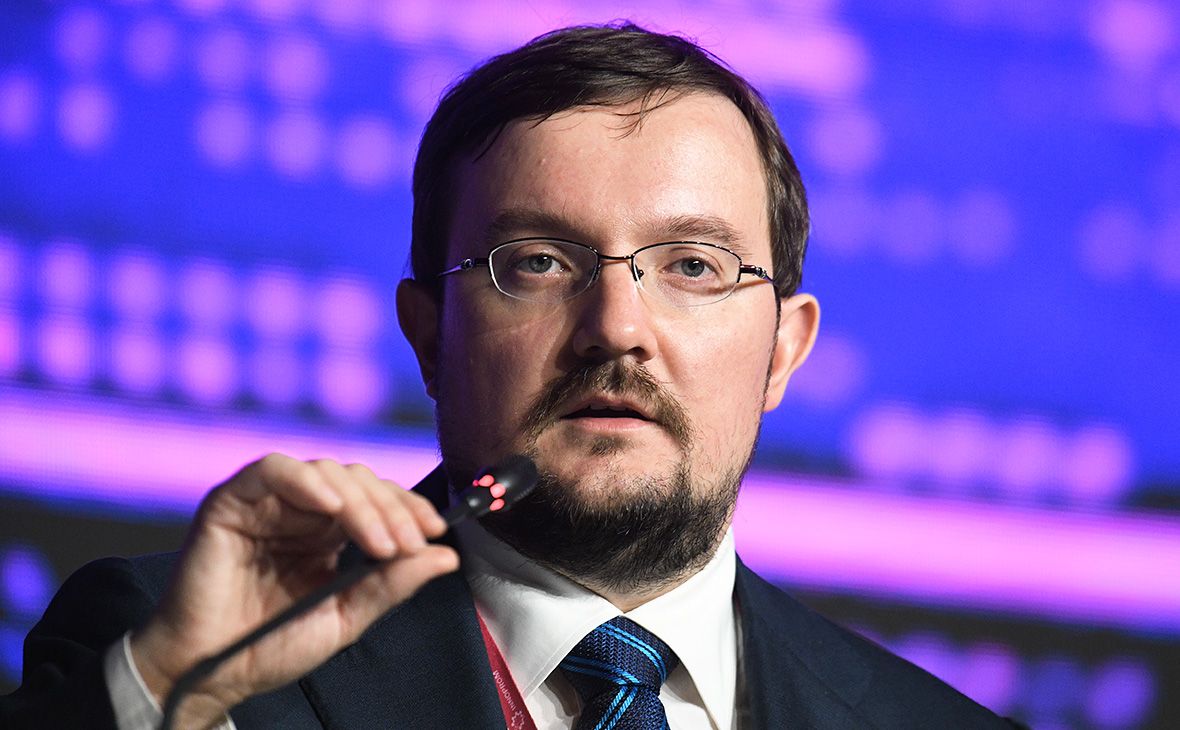 Since Tatiana Golikova became head of the Accounts Chamber, Mr. Repik was included in the Economic Council under the President of the Russian Federation. According to rumours, a certain role in this appointment was played by Tatiana Golikova, who allegedly did not want to stay out of the budget trough when distributing billions for the supply of medicines. With Golikova's return to the Government of the Russian Federation in 2018, R-Pharm Group was entrusted with the development of import-substituting vaccines. This was described in detail in Dokumenty i Fakty.

And there is nothing surprising in the fact that it was Alexey Repik's R-Pharm Group that was one of the first to release the medicine Coronavir in the pandemic wave. Were the interests of the scandalous pharmaceutical company again lobbied by Ms. Golikova?

But, experts say, the medicine is very similar to an existing medicine Avifavir of the Chemrar company. And it is unlikely that Coronavir can be called a novelty. The medicine has the same active substance as the other medicines, approved by the Ministry of Health - namely, Favipiravir.

Mr. Repik is known for his fervent love of generics. In 2019, R-Pharm launched a generic of the expensive anesthetic Sevoran, which was released under the Abbvie trademark. The medicine was called Sevoflurane. In fact Repik’s company released the same. Only the name and the manufacturing company were changed on the packaging. The sale of the new anesthetic enriched Mr. Repik by 698 million rubles. 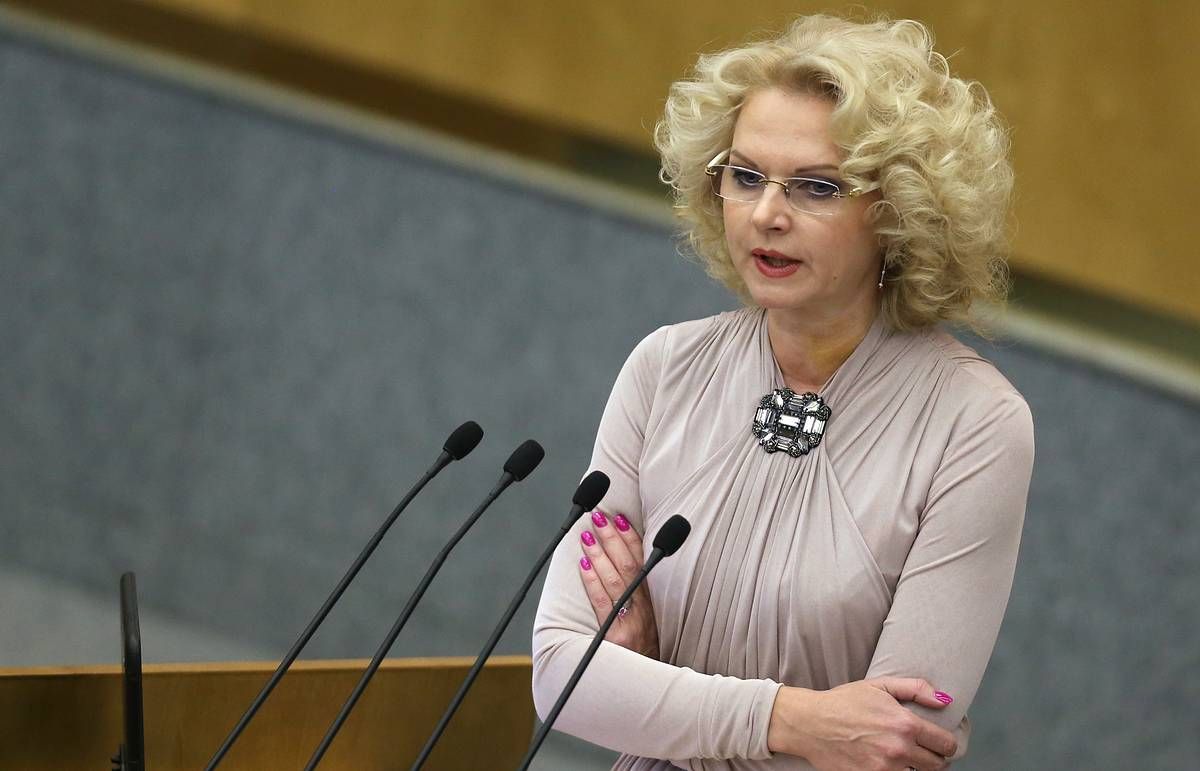 Travel from the Dominican Republic to the pre-trial detention center

And another interesting criminal case related to the main "healers" under the supervision of Tatiana Golikova.

Some time ago, a high-profile case of the former assistant to the Deputy Prime Minister of the Russian Federation Anastasia Alekseeva thundered. She received more than 4 million rubles in the form of two trips to Thailand and the Dominican Republic through the American businessman Gene Spector. This was written by Kommersant.

Gene Spector, who patented the medicine from cancer in Russia, was accused of mediating the transfer of a bribe to Ms. Alekseeva.

In exchange for the paradise trips, Anastasia Alekseeva was supposed to assist in making changes to the order of the Ministry of Health, thanks to which the medicines of businessmen (according to the list) would be included in the list of medicines for medical use. 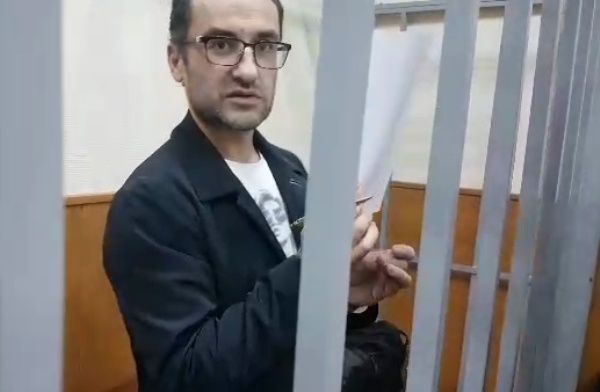 It turns out, as the investigation found out, the fantastic trips of Ms. Alekseeva were organized by Vadim Belonozhko, adviser to the head of the R-Pharm GC Alexey Repik, and Maxim Yakushkin, Director of Corporate Affairs of Promomed DM LLC and former General Director of Promomed Rus LLC.

It should be noted that Mr. Yakushkin is a native of SIA International, one of the largest Russian pharmaceutical distributors. Yakushkin was also a member of the Board of directors of Vesta. And he was the general director of the Project-09 company, co-owner of which was Petr Bely as well.

Vadim Belonozhko, by the way, is a former employee of Roszdravnadzor. He himself got into high-profile scandals. Recall one of them: in 2005, the state allocated 1.7 billion rubles for the purchase of medicines. The coveted amount was received by the Biotek company of Boris Spiegel. And the special "attachment" to  Biotek of the Ministry of Health and Roszdravnadzor was explained, according to rumours, by lobbying Belonozhko: in the past, he was the commercial director of Biotek. 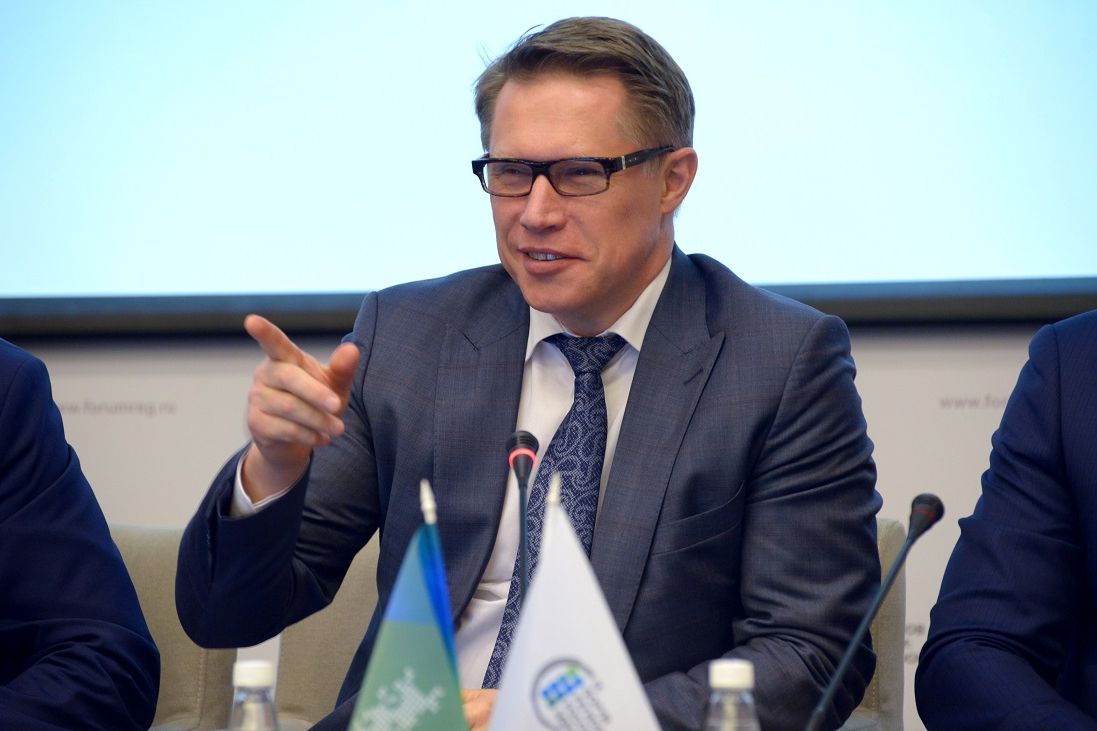 Does new Health Minister Mikhail Murashko also seem to have his favorites?

But three years later, Mikhail Murashko, current Minister of Health, came to this warm place. But earlier Murashko was a witness in a criminal case related to the purchase at inflated prices of computer tomographs for medical institutions in the Komi Republic. This was written by Znak. 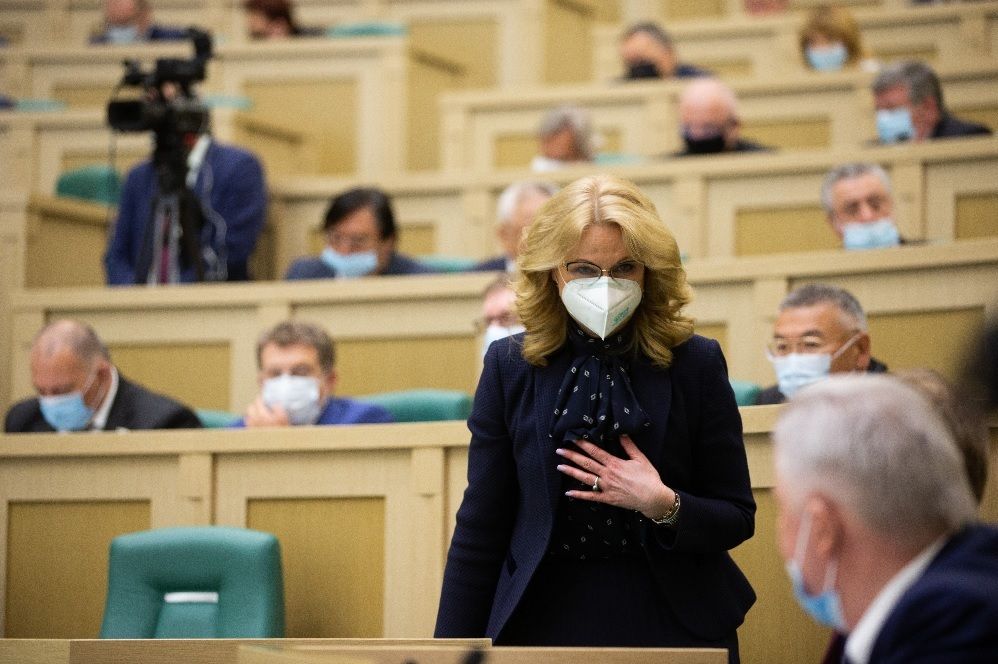 These are the brave guys who are "hired" by the state official Tatiana Golikova to promote their own goals. And it is not surprising that she is surrounded by pharmacists with a reputation that raises questions!