Scandalous boxing promoter and construction businessman Andrei Ryabinsky is going to London, leaving "with the nose" of equity holders and creditors of the MIC group?

At the end of July this year, another bankruptcy petition was filed with Stroykompleks Govorovo LLC, which is part of the MIC group of boxing promoter Andrei Ryabinsky.

The company is a defendant in a total of 150 court cases worth about 4.5 billion rubles. More often, equity holders complain about it, who are not satisfied with the failure to meet the construction deadlines. Periodically, such cases reach the prosecutor's office. As it was with the Tatiana Park residential complex.

As for the quality of construction, it also causes a lot of complaints. Review of the Tatiana Park residential complex. Фото: https://www.novostroy-m.ru/baza/zhk_tatyanin_park/otzyvy

Despite numerous scandals, MIC Group continues to receive construction plots from the Moscow government and develop its network. The Moscow Post correspondent figured out who was behind what was happening and what such impunity was connected with.

Links to organized crime, racketeering and other stories

As The Moscow Post previously wrote, the head of the company, Andrei Ryabinsky, is essentially known as the organizer of boxing fights. According to rumors, he ended up there thanks to ties with criminal structures. Moreover, allegedly with immigrants from the organized criminal group, he also conducts his construction business.

According to rumors, Ryabinsky's former partner in Novoglagolevo-3, Vera Seregina, is the daughter of Sergei Mikhailov, the most respected entrepreneur, who is called the leader of the Solntsevskaya organized criminal group Mikhasem. Ryabinsky was also noticed in the re-registration of shares in companies for unknown businessmen. Often this is done in order to avoid responsibility for the fraud carried out there. 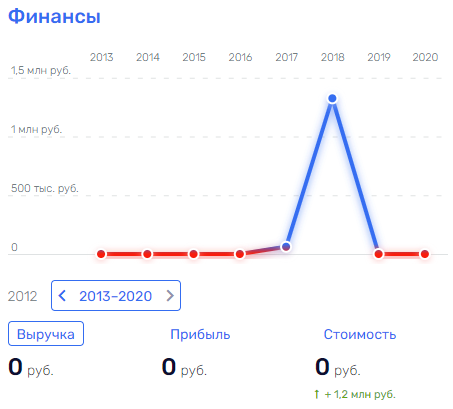 By the way, now the company is liquidated, revenue - withdrawn? Photo: https://www.rusprofile.ru

Many resources published documents indicating that Ryabinsky could engage in outright racketeering. Businessman Anton Bulgakov, Ryabinsky's former partner, allegedly accuses him of this. 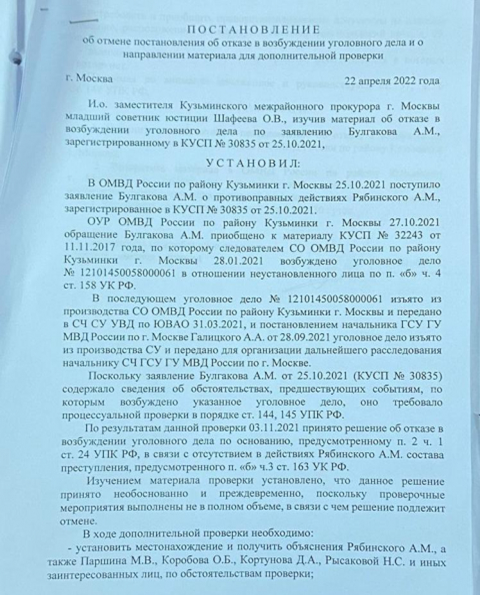 According to Bulgakov's allegedly distributed statement on the network, the object of encroachment was an expensive real estate object belonging to him in Moscow on Volgogradsky Prospekt, 99, p. 1. Photo: https://rosnadzor.com 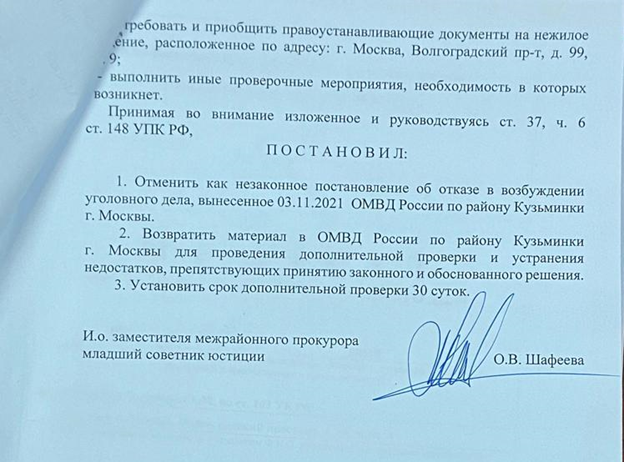 The most interesting thing is that the existence of this document did not become the basis for initiating a criminal case, and, according to rumors, for a reason, but because the head of the Ministry of Internal Affairs Vladimir Kolokoltsev himself does not give him a move. The fact is that the business interests of the son of the chief law enforcement officer may overlap with the interests of the MIC group.

Ryabinsky and the Governor of the Moscow Region Andrei Vorobyov may have a common business. Through the Association of Participants in the Construction Industry "MIC" Ryabinsky is associated with the subsidiary of the Group of Companies "Airplane" - LLC "Airplane Two Capitals." That MIC, that Aircraft Two Capitals were on the list of founders of the association from July 2019 to December 2021.

As The Moscow Post has repeatedly reported earlier, the Airplane group is associated with the interests of the governor's brother Maxim Vorobyov. Recently, another scandalous businessman, who is called close to Vorobyov, the Year of Nisanov, acquired a stake there. According to information from an interview with construction entrepreneur Ilgar Hajiyev on the YouTube channel The Facts, the Vorobyov family, together with Nisanov, collect bribes from participants in the construction industry for general patronage. His percentage allegedly goes to the pocket and mayor of Moscow Sergey Sobyanin.

Ilgar Hajiyev on the structure of the construction market in the Moscow region. Video: YouTube

In the above documents there are surnames that appear, including in the members of Ryabinsky companies or boxing associations - we are talking about Mikhail Parshin (president of the scandalous boxing club named after Viktor Karpukhin - already the late Moscow "authority").

Interestingly, the club was opened in the presence of representatives of the Moscow authorities - nothing embarrassed anyone.

Olga Korobova, who is also mentioned in the document, is a member of the board of directors of MIC. And Natalya Rysakova acted as the liquidator of Finaktiv LLC, registered in Ryabinsky.

In addition to the "Airplane," Ryabinsky may be associated with the scandalous PIK corporation of Sergei Gordeev. In the same period, MIC and its subsidiary PIK (PIK-Region Specialized Developer JSC) were the founders of the developers' association.

Gordeev is also credited with ties to Moscow Mayor Sergei Sobyanin. After all, Gordeev's empire is almost on the verge of bankruptcy, and still no less successful in terms of obtaining tidbits of the capital's real estate than MIC.

All criminal businessmen gathered under the "roof" of Mr. Sobyanin?

Federal media have repeatedly paid attention to the activities of the Ryabinsky MIC group. On REN TV there was a whole issue dedicated to collapsed tiles, cracks in walls, flooded basements, damp entrances and other delights offered by the MIC group. But after this accusatory material, and many others, Ryabinsky did not moderate his influence in the real estate market at all.

Among other things, it is one of the largest suppliers for state contracts - including from the Russian Guard. Prices for apartments for military personnel in 2018 began from 5.3 million rubles - and could be greatly overestimated. Especially considering the quality of construction.

At the same time, the company at different times had six "foreign wallets" - offshore companies affiliated with MIC. Where public money could be withdrawn. There is a feeling that only a tragedy can provoke proceedings towards Mr. Ryabinsky and his team.

There is a version that the scandalous construction entrepreneur "disguises himself" as a boxing promoter so that gullible equity holders looking for information about the developer on the Internet do not stumble upon terrible reports about what is happening in the houses of the MIC group, but rather something like "Ryabinsky spoke about Povetkin's fight."

Analysis of the company's revenue shows that Ryabinsky may predict such an outcome. Therefore, he began to withdraw money from the company and is going to bankrupt it, hiding abroad from criminal prosecution. For two years, the revenue of the head company decreased by 1.3 billion rubles - falling to 181 million. If we recall the multibillion-dollar claims to only one subsidiary of the company, it becomes obvious that Ryabinsky simply may not have another way out of this situation. Was it planned? 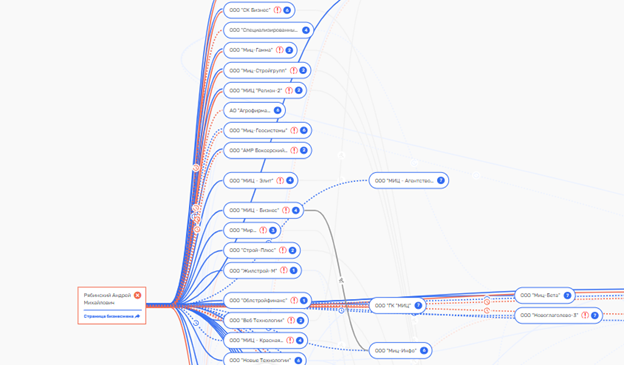 Most of the companies registered on Ryabinsky are bankrupt or reorganized in the form of joining other offices affiliated with it. The latter is often done when the owner wants to hide the company's financial affairs. Photo: https://www.rusprofile.ru

"Will Fly the Falcon"

According to unconfirmed information, in England Ryabinsky has a wife and daughter, and allegedly it is there that he withdraws money, preparing for an imminent move.

Recently, the revenue of Ryabinsky's companies and the cost of its share have been steadily falling - a consequence of the withdrawal of money and an alarming bell for buyers of apartments and creditors of the MIC Group of Companies? Photo: https://www.rusprofile.ru

In mid-October last year, the MIC group acquired a large plot on the site of a former poultry farm for the construction of a quarter of almost 405,000 square meters. m. Around the same time, MIC bought a large plot near Odintsovo. We are waiting for the sales of apartments to open soon. Only now, taking into account all the above, whether the equity holders will wait for at least a pit at the site of the planned construction site is an open question.