According to informants of The Moscow Post, Igor Khudokormov may be involved in the liquidation of two Kuban sugar factories, whose assets were in the hands of new structures. behind one of them is the likely brother of the billionaire Oleg Khudokormov, behind the other is the family of the former head of the Krasnodar Territory, Alexander Tkachev.

According to the correspondent of The Moscow Post in the Krasnodar Territory, according to our source, the recent sale of Korenovsksakhar JSC in favor of Agrocomplex JSC named after N.I. Tkachev could be a kind of bribe to the former governor of Kuban and ex-Minister of Agriculture Alexander Tkachev. The structure moved to Agrocomplex from the United Sugar Company Oleg Khudokormov, who, apparently, is the brother of the so-called "sugar king" and billionaire Igor Khudokormov.

The latter, according to our informant, could thus thank Tkachev for his likely help in gaining control of the Assumption Sugar Tank. Not the last role in this process could also be played by the former speaker of the Kuban ZakSa Vladimir Beketov, as well as the deputy of the regional assembly Sergey Shatokhin, who became the head of the enterprise in 2018.

Back in 2017, RBC wrote that Korenovsky Sugar Plant went to Agrocomplex JSC named after N.I. Tkachev, owned by the relatives of the ex-head of the Kuban, from Prodimex Igor Khudokormov. However, what we see according to "Rusprofail": the plant, it turns out, was liquidated back in 2014, and Uspensky Sakharnik JSC became its successor. A similar situation is observed with Korenovsksakhar JSC, registered at the same address and liquidated on the same day - December 31, 2014.

Already in 2016, another Korenovsksakhar JSC appeared, located at exactly the same address as its predecessor with a similar name. The former owner was the United Sugar Company, which transferred the company JSC company Agrocomplex named after N.I. Tkachev only in May 2021. I wonder what they've been with for four years? 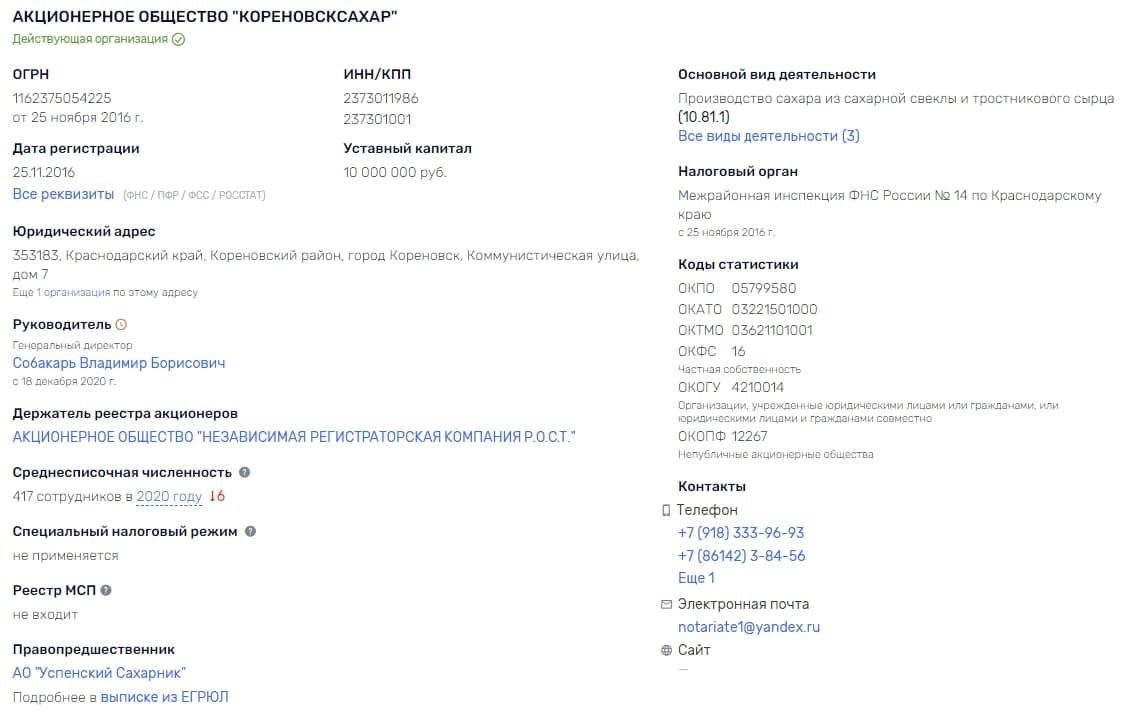 It can be assumed that all this time there was a transfer of assets from resting enterprises to a new one. According to the reader of The Moscow Post, allegedly with the money of the JSC and with the cover of local authorities, Agrosahar, Agrosahar-2 and Agrosahar-3 organizations also appeared in the future, which got significant land allotments. All these three companies belong to one legal entity - Agroproduct LLC, which is almost completely controlled by USC.

It is also worth noting that Nikolai Shevchenko has a share of less than 0.01% in Agroproduct. In turn, Agroproduct, together with Shevchenko and Zemetchinsky Sugar Plant JSC, are the founders of Soyuzagro CJSC. The managing organization of JSC Zemetchinsky Sugar Plant is LLC UK Prodimex-Sugar. So this is where the trace of "Prodimex" Igor Khudokormov was discovered! 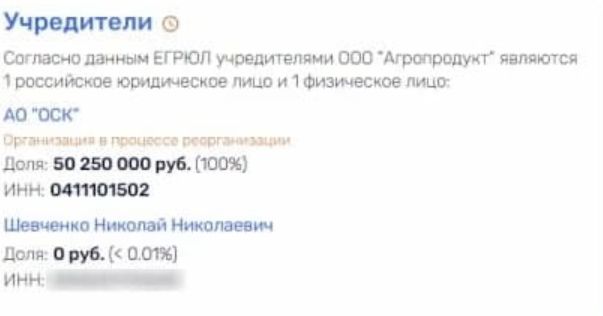 It is possible that it was the billionaire who transferred the asset in favor of the Tkachev family. He was just at that time interested in sugar: at the moment, Agrocomplex JSC named after N.I. Tkachev has four plants: Crystal (Vyselki art.), Tikhoretsky, Pavlovsky and Korenovsky. All together, they are 3,700 tons of sugar per day, and occupy 6% of the market of the Russian Federation. Back in 2017, Agrocomplex JSC named after N.I. Tkacheva entered the top 5 sugar producers in the country.

However, earlier Tkachev did not show active interest in this industry, mainly focusing on livestock and arable land, as The Moscow Post told in detail. Our informant suggested that the answer to this could be in JSC Uspensky Sakharnik, which was lit up in the history of the Korenovsky plant.

Earlier, The Moscow Post wrote in detail the story of our other informant, who since the beginning of the 90s was a holder of shares in the Assumption Sugar Plant, but recently learned that the organization was liquidated back in 2009, and is not legally its successor at the same address of Uspensky Sugar Plant JSC, which transferred all the assets of the company. That is, he is no longer entitled to count on any dividends. 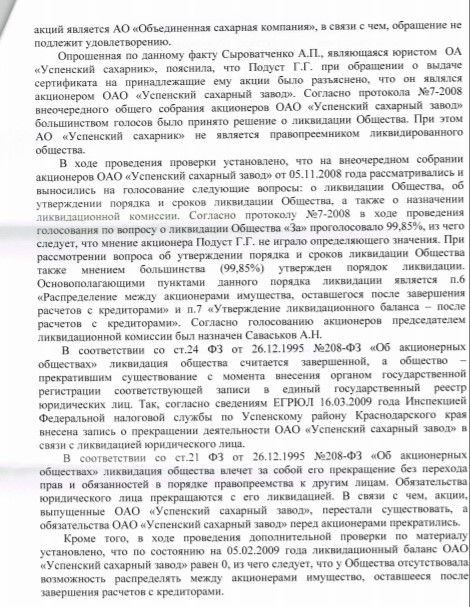 It is possible that a similar situation occurred with Korenovsksakhar JSC, because the company established in 2016 appeared as if "out of the air." In other words, the previous shareholders of Korenovsksakhar JSC, liquidated in 2014, cannot ask anything from the new organization, in fact,.

Moreover, we note that the liquidated Korenovsky Sugar Plant OJSC did not experience any financial difficulties, having a modest, but profit of 100 thousand rubles. It is also reliably known that the Assumption Sugar Plant has never encountered such difficulties, but, nevertheless, sank in the summer.

It seems that the same people are behind the situations with both plants. And then we will pay attention to the fact that the general director of Uspensky Sakharnik is Sergey Shatokhin, a deputy of the regional ZakS. According to unconfirmed information, Vladimir Beketov, previously already 22 years old (!), Was the speaker of the Kuban ZakS, helped to attach him there. In addition, Beketov's son-in-law Alexander Artyukhov worked as deputy general director of the Assumption Sugar Worker.

And Beketov, in turn, should be well acquainted with Alexander Tkachev, who headed the Krasnodar Territory from 2001 to 2015. Is that where the circle closed?

According to The Moscow Post informant, allegedly Sergey Shatokhin could also be involved in the story of the transfer of assets of the Korenovsky Sugar Plant. For this, according to unconfirmed information, he could have suffered from criminals in the Korenovsky district as a result of a robbery, after which even his wife was allegedly hospitalized with a nervous breakdown. However, all these may be ordinary rumors, but smoke without fire, as you know, does not happen.

It is also interesting that in the situation with both sugar enterprises, the trace of USC Oleg Khudokormov is visible, which may be the brother of the famous billionaire Igor Khudokormov. By the way, Oleg is the founder of DNT "Palitsa 2012," where Vyacheslav Ivanovich Khudokormov is designated chairman of the board.

But the billionaire-owned Prodimex ranks first in the country in sugar production. At the same time, Khudokormov was noticed in dubious methods of doing business. Back in 2009, in the Voronezh region, employees of the Volk private security company (representing Promidex) faced representatives of the Quail Farm company. Moreover, the former had combat weapons in their hands, and the latter had traumatic ones. The reason for the conflict, according to Quail Economy, was the alleged desire of Promidex to take possession of their land allotments. However, representatives of Quail Economy were found guilty of the shootout. This was told by the "General newspaper".

The publication also talked about a similar story in the Voronezh region, when Prodimex employees did not allow the farmer Igor Yugov to remove the crop from the field. Instead, the harvest came to collect the structure of the company Khudokormov, against whom a live chain lined up in the field.

Knowing this, it becomes clear why the billionaire himself prefers not to appear in the public field once again. Nevertheless, it is known about his probable ties in the government of the Russian Federation and friendship with Dmitry Patrushev, since when he was the head of Rosselkhozbank, Khudokormov successfully increased capital with the likely participation of the bank. Earlier, The Moscow Post wrote in detail about this.

Now Patrushev works in the Ministry of Agriculture, where Mr. Tkachev worked before. So the presence of some connections between the latter and the entrepreneur is also very willingly believed. And knowing Tkachev, Khudokormov could get close to the Kuban elites, without avoiding the attention of the old-timer of the regional policy Beketov.

In this case, Khudokormov could have both monetary and political resources that allowed him to gain control of the Uspensky and Korenov factories, which he could put his eyes on back in the 90s. And the latter he could "give" to the Tkachev family.