Residents of Barvikha stood up to protect the forest near the village from the development of the Premium-Stroy company. Who is behind it?

Unique archaeological sites and the natural landscape, and mainly - the legal rights and interests of people, are under threat. The residents of the suburban village Barvikha asked editorial office of The Moscow Post for help. Despite the elite status, many people living there are ordinary citizens who are used to living on their own land, walking through the picturesque forests of the Odintsovo district of the Moscow region. All this can be destroyed by the developer of elite housing in Barvikha, which is presumably the Premium-Stroy company, its current and past owners - partners Nikolay Litovchenko and Ivan Luzhaev.

People who contacted us told us that the company fenced off the allegedly owned part of the forest with a fence, and does not allow residents to go there. Only someone with serious people behind can behave so brazenly. According to our information, the structure can be patronized by Deputy Prime Minister of the Russian Government Marat Khusnullin, who previously served as the "construction" Deputy Mayor of Moscow.

So, finding a fence that fenced part of the forest, residents of Barvikha went for a mass walk. They wanted to look at the object and express their dissatisfaction. However, the fence was not removed, moreover, the police were driven there.

Then residents were strongly urged to return to their homes. Almost the next day, a stand with photos of its participants appeared at the place of the walk and a demand "in pre-trial order" to pay more than 1 million rubles to Premium-Stroy LLC for damage to the company's property. What kind of damage, who calculated it, when there was an examination - it is not clear at all.

Of course, this was interpreted as an attempt to pressure, a desire to intimidate people. A police report against the company for libel false denunciation and extortion was filed immediately. One of the participants made a video, which is now spreading on the network. However, it seems that Premium-Stroy LLC does not intend to back down.

The situation is being heated up, and law enforcement agencies are involved in it. Residents have already filed a complaint against the developer's actions to the Prosecutor's Office. People are sure that the forest in 2003 through allegedly not the most legal schemes was attached to the lands of the Barvikha settlement, after which, without public hearings, they were assigned the permitted type of use "housing construction".

After that, it could be sold for a penny to some "necessary" firms, among which, according to the residents of Barvikha, was Premium-Stroy. Presumably, it is about the one that was then owned by partners Nikolay Litovchenko and Ivan Luzhaev.

Somehow, the objects of cultural heritage turned out to be in private ownership: Barvikhinskoe Gorodishche, dating from the I century AD, as well as the Village of Barvikhinskoe, which is under state protection. Environmentalists are also raising the alarm - they say that the company's plans may disrupt the unique natural landscape. 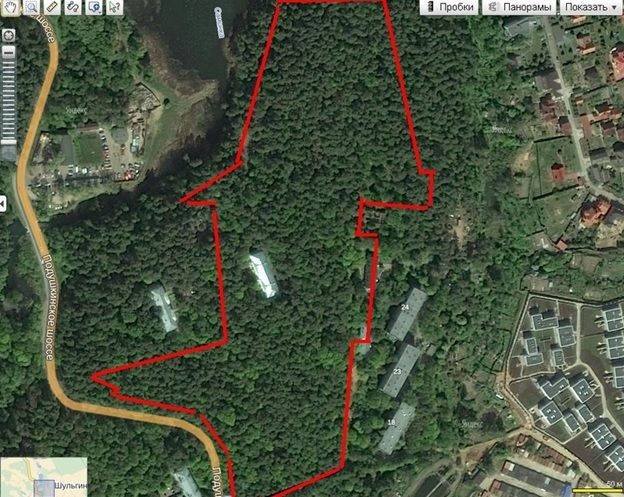 Part of the forest that, according to the residents of Barvikha, Premium-Stroy wants to "capture"

What is curious. Unlike many similar cases across the country, the position of the Premium-Stroy is categorically not supported by local authorities. The case is unique.

As stated by Head of the Odintsovo district of the Moscow region Andrey Ivanov, the work was not coordinated with the city district administration. The owner did not apply for an earthworks warrant, as well as for permission to build a fence. Not to mention the construction of housing. His words are quoted by the Evo-Rus information portal.

As a result, Andrey Ivanov appealed not only to the Prosecutor's office, but also to Gosadmtehnadzor and Rostechnadzor, so that they gave their assessment of how the plots of about seven hectares were privately owned since 2003. He considers the current actions of Premium-Stroy LLC to be illegal.

He also explained that according to the land use rules that apply in the district, the owner will not be able to get either an urban development plan or a construction permit.

Residents, in their turn, in the appeal to the Prosecutor's office indicate that the Federal Agency for State Property Management did not make a decision to sell the mentioned land plots to private ownership. In fact, the land was stolen from the state, and the budget did not receive about 1.6 billion rubles.

But the company doesn't seem to care. As follows from the message on the website of the business portal about medicine Vademekum, allegedly, Litovchenko and Luzhaev became owners of Premium-Stroy in 2017, and overgrew with a series of state orders very quickly.

Now they are building 15 rehabilitation clinics throughout the country. In addition, their structures were the developers of the Radisson hotel in Barnaul, which also had a scandalous character and caused local discontent.

Why such speed? Perhaps the fact is that from 2011 to 2013, Luzhaev headed a subsidiary of Rostec GC group - a branch of JSC "DEZZ" Roszdrav, which coordinated the construction of the Federal Centre for traumatology, orthopedics and endoprosthetics in Barnaul.

Luzhaev's partner Nikolay Litovchenko at the same time worked as the head of the production and technical Department in the head office of "DEZZ". And Premium-Stroy was a technical customer for the project of organizing a network of Federal centres of the VMT (High Medical Techniligies). In other words, both of these entrepreneurs can be directly linked to Head of Rostec, Sergey Chemezov, who, as it is known, should be dealt with very carefully.

But this applies to their work in the Altai territory and other regions. Moscow and the Moscow region are a completely different "glade". And here former Sobyanin's Deputy, and now Deputy Prime Minister of the Russian Federation Marat Khusnullin, who was responsible for all major capital and near-capital construction projects, could "help" Premium-Stroy.

It turned out that Nikolay Litovchenko (he became the full owner in May 2019, having bought a share from Luzhaev) is simultaneously The CEO of Amethyst JSC, which is engaged in dismantling and demolishing buildings.

And the owner of this company is a certain Ruslan Rifovich Salimshin. And another entrepreneur, Rustam Rifovich Salimshin, has been active for a long time in Moscow and the Moscow region. The name differs by only one letter. According to evil tongues, allegedly they can be brothers who act under the patronage of Marat Khusnullin.

Both Premium-Stroy and Amethyst companies have major contracts with the Moscow authorities. Moreover, both were actively working at the same unit - the Luzhniki sports Palace, where they were building the FOK (sports and recreation complex) and engineering support for the 2018 World Cup. 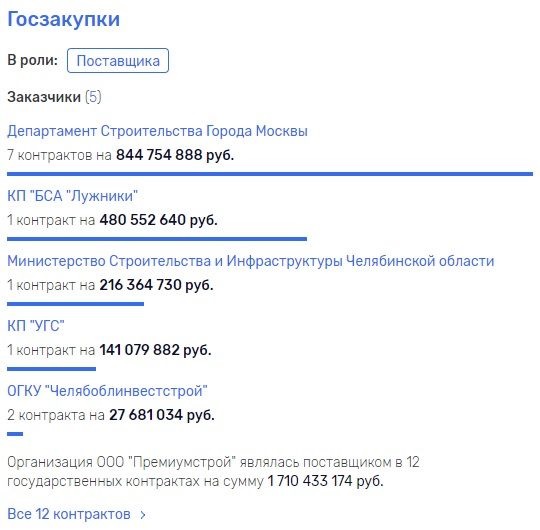 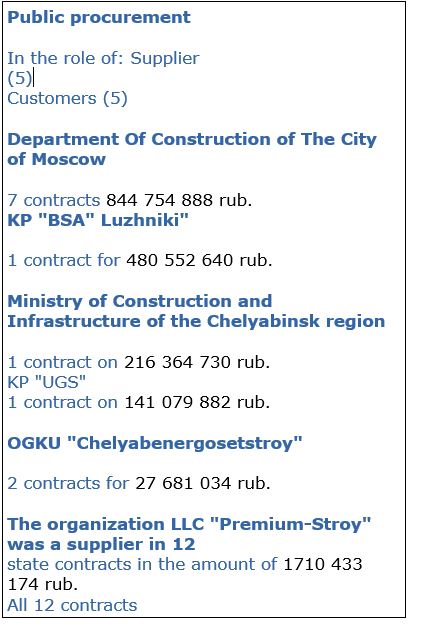 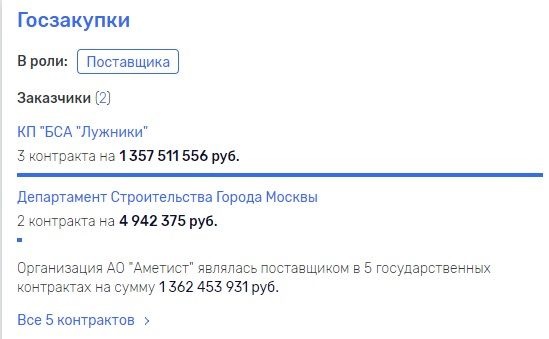 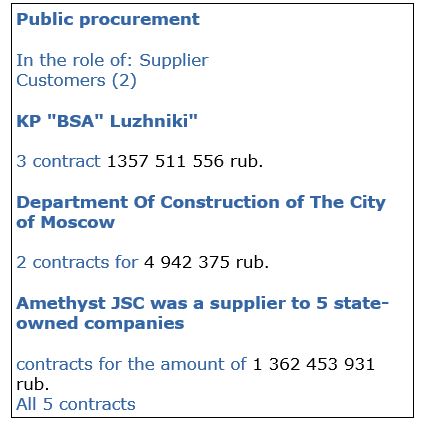 What concerns Rustam Rifovich Salimshin, earlier he was called the employer of Erik Gimatov, who owned 50% of Gaskar Integration, the company that developed Social monitoring app for tracking Muscovites with coronavirus. This was reported by Daily Storm.

This company, which works at the intersection of IT and construction technologies, earns hundreds of millions of rubles, thanks to state contracts. Its developments are used to control the main construction projects of the capital. Daily Storm openly claims that it is backed by businessmen from Tatarstan, where Khusnullin himself comes from, and the company's achievements in state contracts very successfully coincided with his work as Vice-Mayor of Moscow for construction.

It looks like the reason was too obvious. Premium-Stroy operates almost all over the country, but only in Moscow different people, who may be associated with it, receive state contracts for the same objects. And now they are involved in a major scandal!

According to evil tongues, at one time Marat Khusnullin subdued almost the entire construction market of the capital and the closest territories, placed his people in key positions, including the state Mosproekt.

It seems that Premium-Stroy of Litovchenko and Luzhaev (who bought a plot in Barvikha from another structure that bought it back in 2003 on very dubious grounds) was also among the companies that got into his confidence,. Extreme in this situation, as it happens, turned out to be ordinary people.

However, the resonance they raised and the desire of local authorities to act according to the law give hope that the plans of Premium-Stroy will not be implemented. And then there may be questions already to those by whose grace these plots could become their property.