Soft stelets, hard to sleep: does the automobile history of the Federal State Unitary Enterprise of the Ministry of Energy "smell" Shulginov and Vekselberg?

The head of the FSUE FESCO Nikolai Myagkikh, who was detained on suspicion of corruption, could be patronized by the head of the Ministry of Energy Nikolai Shulginov and oligarch Viktor Vekselberg.

According to the correspondent of The Moscow Post, the general director of the Federal Energy Service Company subordinate to the Ministry of Energy (FSUE FESCO), the chairman of the energy efficiency committee of the Perm branch of Business Russia Nikolai Myagkikh was detained in Moscow during a joint operation of the police and the FSB.

The investigation believes that the Soft could be involved in the scheme for the sale of FSUE-owned cars from the departmental fleet. With the help of a fictitious assessment, the cost of cars was underestimated by 90%, after which they were sold - but already at a real price. At the same time, it is possible that even the remaining 10% did not return to the treasury of the FSUE.

Damage to the budget may amount to 25 million rubles.

FSUE FESCO is subordinate to the Ministry of Energy, which is headed by the very scandalous ex-head of the RusHydro state corporation Nikolai Shulgingov. Not he appointed the Milestones, but he kept him in office, and before that he himself became famous for the "sale": he sold the non-core assets of RusHydro, as a result of which some Far Eastern oligarchs could be in the plus, but the budget is unlikely.

It seems that this gave confidence to Nikolai Shulginov, and then to all officials subordinate to him in the Ministry of Energy, that "you can slip." Apparently, Nikolai Myagkikh - failed. At the same time, the lack of attention to this structure of the Ministry of Energy before the scandal surprises.

Being both a supplier and a customer for many state contracts worth hundreds of millions of rubles, FSUE FESCO, under the leadership of the Soft, showed deplorable financial results. The company received the only more or less serious profit only in 2016, 12 million rubles, balancing the rest of the time on the verge of profitability.

The result of 2020 was a loss of 7.6 million rubles. Now FSUE is in bankruptcy proceedings - and this was all visible before the Myagkikh case. Shulginov and his deputies preferred to close their eyes to this?

Another possible participant in the scandal may be the structures of entrepreneur Viktor Vekselberg. It turned out that FSUE FESCO has a whole series of state contracts with PJSC Permenergosbyt. The latter is controlled by Viktor Vekselberg's CES Holding. 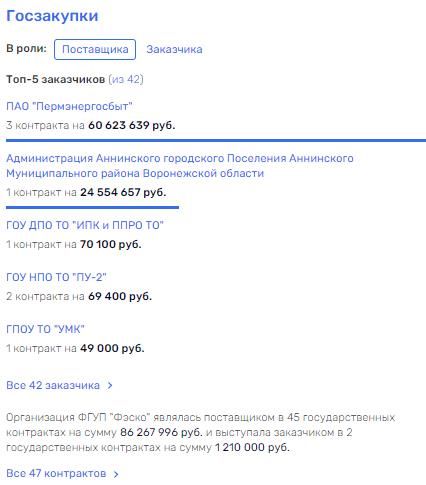 The latter is credited with a great love for placing their people in various posts, including state enterprises. Today, it is Viktor Vekselberg who controls the lion's share of the Perm, and not only, utility sector - electricity, water supply, water disposal, heat generation.

Cooperation between FESCO and Permenergosbyt looks strange. The largest contract concluded between them, where FESCO acted as a supplier, dates back to 2021. The amount of over 657 million rubles, the subject of purchase is the supply of lighting products. But if there is some clarity with her, FSUE really produces devices, then with two other contracts something strange.

Contracts of FSUE FESCO with Permenergosbyt may be the subject of separate consideration by the security forces?

These are contracts from 2019 with a total value of almost 60 million rubles from 2019. The subject of the purchase is very vague: the implementation of a set of measures aimed at energy saving and improving the energy efficiency of the use of energy resources. As you know, it is possible to increase energy efficiency in various ways - including those that do not involve monetary investments. And after receiving such funds, FSUE was on the verge of bankruptcy?

However, in the situation with the Soft, there are still many different mismatched quantities. It turned out that he was the founder of 19 public and commercial organizations at once, many of which have already been liquidated, and many are working. Of interest may be Lik-Perm LLC, liquidated in 2018, which traded in machines and other equipment. 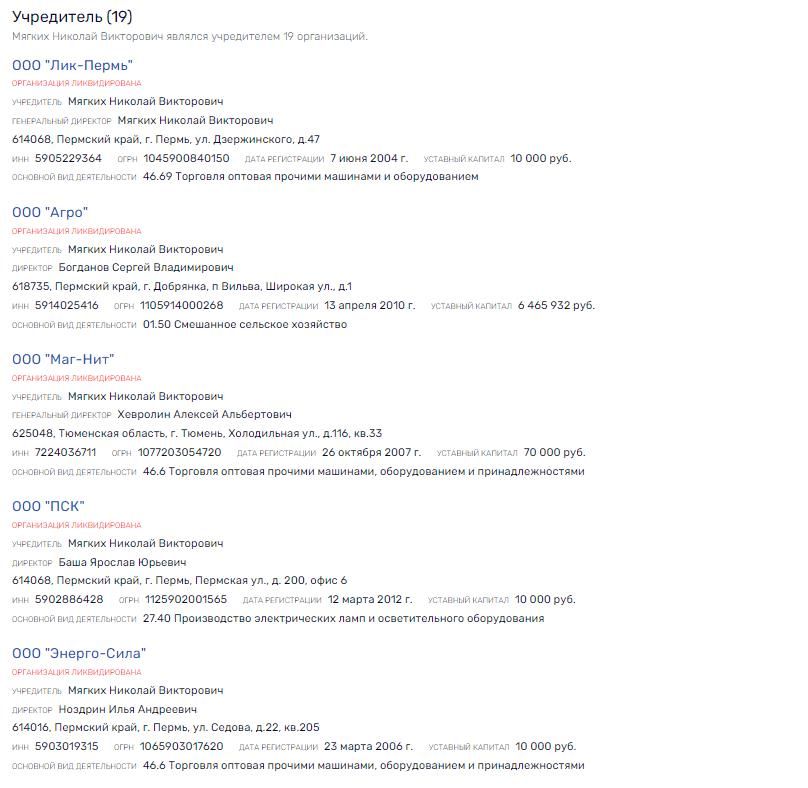 Mr. Myagkikh there was not only the owner, but also the general director. Moreover, he somehow managed to combine this work with work in FESCO, which he led since 2017. However, he was in the leadership of Lik-Perm until the liquidation of the legal entity in 2018. Is it legal for the head of a state enterprise to combine work with managing his own business?

At the same time, Lik-Perm had many co-founders. One of them, a former partner of the Soft Andrei Evsyukov, was the founder of another organization - Lik-Chelny LLC from Naberezhnye Chelny. He is also the co-founder of Lik-Yekaterinburg LLC, Lik-E. LLC. All these organizations have now been liquidated.

It seems that the partners were interested in the car business. Apparently, doing this through FESK turned out to be much better than through ordinary companies?

It is also noteworthy that, judging by open sources, Evsyukov and Soft companies had a variety of problems, their reliability was not well assessed. For example, in the current company of Evsyukov LLC AE-Group, information about the legal address of the person turned out to be inaccurate, and the address corresponded to the address of the mass registration of legal entities. The authorized capital of the company is only 10 thousand rubles. 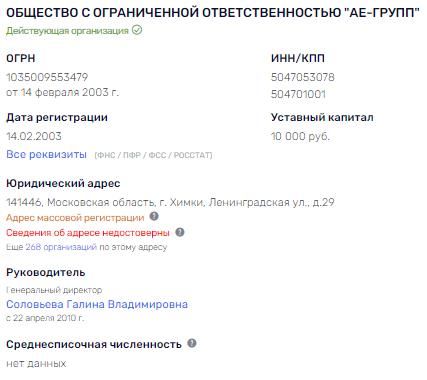 Returning to the possible role of Viktor Vekselberg in the fate of Nikolai Myagkikh, many questions arise. It is no secret that Vekselberg is building a powerful network of influence in the regions of presence. And even more so, he needs his people in the Ministry of Energy and structures subordinate to the institution.

Meanwhile, in the Perm Territory, many have long been unhappy with the dominance of its structures. So much so that they jokingly propose to rename Perm to Vekselburg.

Most importantly, having gained control over the public sector of Perm, Vekselberg's companies constantly fall into high-profile scandals related to tariffs or the quality of service provision. Back in 2017, when Myagkikh became the general director of the Federal State Unitary Enterprise, the commission of the Federal Antimonopoly Service of the Russian Federation conducted an on-site inspection of regional tariff services, including Perm.

It turned out that the main objects of expenditure of network and generating organizations, most of which are in Perm in the hands of Vekselberg, are unreasonable or not documented. This was written by the publication Properm.

It seems that after years, little has changed in this regard - people complain about rising tariffs today. Only now, Vekselberg seems to have lost his possible representation in FESCO. Not a great loss?