"Soda" without whiskey for oligarch Mazepin

An influential owner of Uralchem can use the environmental disaster in the Perm region to "take away" the enterprise that he likes.

As the correspondent of The Moscow Post reports, one of Russia's largest fertilizer companies, URALCHEM JSC of the controversial oligarch Dmitry Mazepin, has asked the state authorities of the Perm region to investigate the incident with the contamination of the Kama river.

Yesterday it became known about harmful emissions getting into the Kama. According to preliminary data, the source of contamination could be LLC Soda-Chlorate - the only manufacturer of potassium chloride solution in Russia, located in the industrial zone near the Kama river in the city of Berezniki.

Due to the current situation, URALCHEM was forced to stop the operation of its Azot enterprise, located downstream of the Soda-Chlorate plant. Possible losses from downtime in URALCHEM are still difficult to name. It is only reported that they will be at least $10 million.

Though, it seems, that Dmitry Mazepin is not discouraged. Firstly, this amount still looks small, and he has an opportunity to show himself a fighter for the environment. And secondly, according to insiders, he may even be happy about this situation. They say that he has long had his eye on Soda-Chlorate, and can use the incident to persuade the owners to sell it in favor of JSC URALCHEM.

Dmitry Mazepin has long gained fame as a man who is eager to get other people's chemical and other assets on the market. Apparently, having become almost a monopoly on the market of potash salts with his Uralkali, he wants to subjugate the chemical industry as well. And Soda-Chlorate, as the only manufacturer of potassium chloride solution in the country, would become a jewel in his "crown" and would fit perfectly into the production chain.

But just the owners of Soda-Chlorate were very uncooperative. According to our insiders, attempts to acquire the plant could have been made by Mazepin 9 years ago, when the former CEO of the Soda plant Gennady Shutikov sold 49% of the St. Petersburg company named Klassic, which owned the plant.

As a result, in 2011, this share went not to Mazepin, but to Yury Borisovets, the owner of the RIAL estate development group, precisely speaking, the company close to him, LLC Сargo. Kommersant wrote about the completed transaction and the connection of the Borisovets' RIAL  with this organization at the time.

Today LLC Cargo owns 100% share in LLC Soda-Chlorate. Cargo LLC, in its turn, is 49% owned by the same Gennady Shutikov, who has long been called the man of Borisov by evil tongues. And the remaining 51% of Cargo belongs to Marina Medvedeva, who is General Director of Yury Borisovets' RIAL estate company. 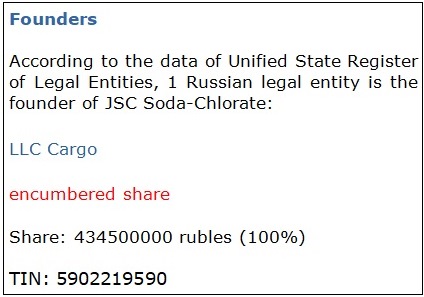 And here we need to explain something. If Dmitry Mazepin really tries to use the situation on  Soda-Chlorate to "attack" Borisovets and further get the plant into his ownership (legally or illegally), then he has chosen the perfect time for this. Now Yury Borisovets must experience serious financial difficulties, and be much more pliable than before.

The share of Cargo LLC in Soda-Chlorate is pledged to Sberbank. The plant itself has been operating at a loss in recent years, and in 2018 it amounted to almost 40 million rubles. It's time to "take away" the plant for debts, and what is more - using an environmental scandal for this.

But the shares of Gennady Shutikov and Marina Medvedeva in Cargo LLC are also pledged. However, it is impossible to understand from the unified state register who exactly has it. Most likely, it is an individual, which may be Yury Borisovets himself with a high probability. 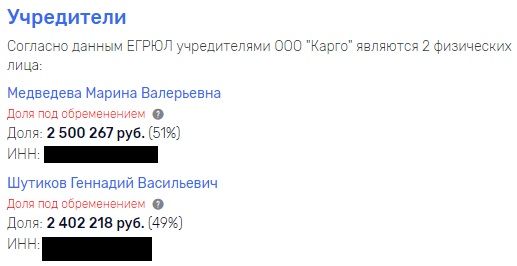 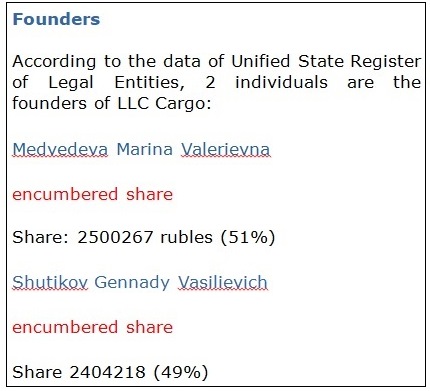 At the same time, Borisovets has great difficulties with the Mashine Building Plant named after F.E. Dzerzhinsky. For many years, its structures were related to this enterprise, acting as the holder of its debts. After that, a chain of events occurred at the Plant, which led to the collapse of the enterprise.

Criminal cases were initiated, and the real term of imprisonment for embezzlement at the Plant was received by its former top Manager, Deputy of the legislative Assembly of the Perm region, Yegor Zavorokhin, as Kommersant wrote. The latter was rumored to have a long-term friendship with Borisov.

As a result, Yury Borisovets himself got "in the middle". In January 2020, the Supreme Court of the Russian Federation arrested his property in the bankruptcy case of this plant. This was written by the publication Ura.ru. According to rumors, he could be brought to bankruptcy artificially by selling off the property and squeezing the last of the company's assets.

In addition, interim measures were taken against 8 organizations at once, among which Rial-Audit appered to be. The firm is considered to be affiliated with Yury Borisov. Formally, the owner and CEO of the structure is Marina Medvedeva, who was already mentioned.

Thus, Borisovets has a lot of problems: assets are frozen by the court, the company is unprofitable, plus his own game in the Kama political arena requires a lot of attention and effort. And then there is also an environmental disaster, for which, Soda-Chlorate will definitely have to pay if it is found guilty.

So Dmitry Mazepin and his URALCHEM "appeared" on the horizon. There appeared claims to the competent authorities and so on. It is unlikely that anyone will be surprised if at the same time Mazepin's people offer Borisov help in getting rid of such a heavy burden as Soda-Chlorate. At a reasonable price, of course.

Mazepin and conflict come together?

And here the authorities of the Perm region need to strain, and not Borisov. Few assets that Mazepin obtained by hook or by crook flourished under his "wise" leadership. Until now, everyone has been talking about the corporate conflict around PJSC Togliattiazot - the last chemical giant in Russia, which remained in the hands of its management, and not the state or top oligarchs.

Apparently, this situation did not suit Dmitry Mazepin, who, having received about 10% of the plant in 2008, could make a series of attempts to put ToAZ under his total control.

According to rumors, Mazepin could be behind a criminal case against the former majority owner of ToAZ Vladimir Makhlai and his son Sergei Makhlai, who headed the Board of Directors in order to discredit them. In July 2019, the court found Vladimir Makhlai guilty of multibillion embezzlement at the plant and sentenced him to 9 years in prison in absentia. This was reported by TASS.

The corporate conflict, which has been going on for 10 years, has long been international. Mazepin, URALCHEM and a number of other individuals were sued by offshore companies that now own a significant part of ToAZ.

Just a few days ago, documents that were presented as correspondence of the legal company that handles these cases were published in the network. Its authenticity has not yet been confirmed, but there Mazepin, URALCHEM and all their activities are given very unambiguous assessments.

As follows from the documents, the judge of the Chief magistrate of England and Wales, allegedly called Dmitry Mazepin "a corporate raider" who wants to "absorb" ToAZ, and the whole case of URALCHEM against ToAZ was a lie "from beginning to end". It is not very flattering and pleasant for Dmitry Mazepin, even if it is fake. And not very good for his future judicial prospects.

The situation has given rise to rumors about the imminent bankruptcy of Uralkali and URALCHEM. In this context, getting ToAZ under control, and Soda-Chlorate with an established sales chain in addition to it, is just a great option.

There is also a worse option, such as what happened to the plant VMF JSC (Russia). Mazepin bought it back in 2008 - allegedly to establish production. But something went wrong. Or maybe it was meant to be from the very beginning.

The company was supposed to be closed due to severe wear and tear, but Mazepin was not confused when buying. As a result, a year later, in 2009, the ammonia systems were forced to stop working there. After that  - a large number of dismissals and losses of one and a half billion rubles.

It seems that Mazepin did not intend to raise the plant from its knees at all. According to rumors, immediately after the purchase, the company began to withdraw good assets, which were allegedly "transferred" into the structures of URALCHEM. It is about railway tracks, land plots, and so on. Evil tongues gossip that all operations were carried out through the Cyprus offshore Assethill Holdings Ltd, which then may have been part of an affiliate with Mazepin's Kirov-Chepets chemical combine. 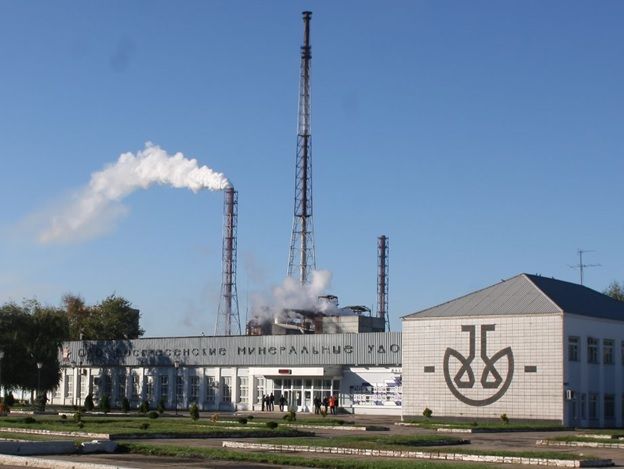 Dmitry Mazepin's fame gained during the so-called Apatite wars does not fade either. Then his URALCHEM by hook or by crook tried to get the PhosAgro company to reduce tariffs on Apatite concentrate. As a result, the entire mineral fertilizer industry in Russia was waiting for a shock.

Can Soda-Chlorate repeat the fate of the plant VMF JSC (Russia)? Quite possible. Even if we do not mention the fact that finishing a lying person, in basically, is not very nice. But it seems that big Russian business and business ethics are very difficult to reconcile.