Can Yury Shumskiy, the Head of the Plant named after Y. M. Sverdlov, who evaded criminal punishment, launder money from the "subsidiary" of Rosgeologia?

According to the correspondent of The Moscow Post, Vladimir Marugov, the former shareholder of Permneftegeofizika, the subsidiary of Rosgeologia, is trying in vain to challenge the sale of his share in the company. The court again denied his claim. "Threads" from the purchaser of shares lead to scandalous Head of the Dzerzhinsk plant named after Y. M. Sverdlov and ex-Deputy of the Duma of Dzerzhinsk Yury Shumskiy, who could be suspected of withdrawing funds.

In 2013, Marugov sold his stocks to the capital's entrepreneur Vyacheslav Kuraev for 10 million rubles. However, later, he filed a lawsuit, and the court decided that the stocks were purchased at a low price and the real value of the package is 51.9 million rubles.

Though the stocks of Permneftegeofizika never returned to Marugov. The fact is that Kuraev was not even a shareholder for a month and resold securities to the capital's Komanda LLC Football Agency and individual Vyacheslav Olesik. Marugov demanded to cancel these purchase and sale agreements, but the court has nothing to say - the deal went through when the original sale was in force.

50.67% of Permneftegeofizika stocks belong to Rosgeologia. Almost all the remaining stocks are now owned by dubious structures that received a share from Vyacheslav Kuraev. He could also act in the interests of one person - Yury Fedorovich Shumskiy.

The fact is that the Managing Director of Permneftegeofizika is a certain Igor Shumskiy, who may be a relative of our "hero". It cannot be excluded that the family decided to weaken state control over the enterprise, so that it would be easier to "launder" money through fake structures. Moreover, Yury Shumskiy could already be suspected of such acts… But let us speak about it later.

If we look at the new shareholder of Permneftegeofizika - Komanda LLC Football Agency, we can find out that for the entire time of existence, the company received only one state contract. And it is from the Federal enterprise Plant named after Y. M. Sverdlov, which is managed by the same Shumskiy.

At the beginning of 2018, Komanda Football Agency signed a contract for almost 4 million rubles. This was presented as the amount for the annual rent of the 2013 Mercedes-Benz Tourismo 15 RHD bus.

Does it mean that the company's stocks were "squeezed" in favour of Shumskiy's "bait" structures?

Permneftegeofizika has got a subsidiary - Khanty-Mansiysk JSC Neftegaztechnologia. It is headed by a probable Shumskiy's relative - the same Igor Shumskiy. His staff is modest - only a couple of people. In 2018, they earned 7.6 million rubles. But at the same time, the company was at a loss of 1.9 million rubles.

A certain Prikamye LLC, which is undergoing the process of liquidation, is also under his management. At the end of 2018, the company had a loss of 15 thousand, but there was never any revenue. It seems as if all these are companies-pads for withdrawing funds. Aren't they "laundries" of the Shumskiy family? These questions should be answered by relevant authorities, which, by the way, have already studied the activities of Yury Fedorovich. They even filed a lawsuit.

Did Shumskiy keep his weapons while the investigators kept secrets?

The case against the Deputy Head of Plant named after Y. M. Sverdlov concerned weapons. As it turned out, in the plant's warehouse, where he was previously the Deputy General Director, and now works as the Head, in 2012, weapons belonging to PKP AKBS LLC were stored and intended for disposal.

However, as Kommersant wrote, AKBS decided to convert military weapons into civilian and souvenirs. But instead of business, the firm's management was waiting for the FSS investigation. The case was also initiated against Top Manager of the plant Yury Shumskiy, who, in fact, signed agreements on the storage of weapons.

It is noteworthy that the investigation did not have any questions to defense Minister Anatoly Serdyukov, who ordered to distribute weapons to save on disposal…

However, all questions disappear when it becomes clear in whose interests this case has surfaced. Competent people rumoured that the investigators got the old story with weapons to be disposed of, when the management of the Plant named after Y. M. Sverdlov rebelled against the idea of transferring the plant to the Rostec state corporation. Currently, none other than Anatoly Serdyukov works as the industrial Director of the Rostec aviation cluster.

Now the conflict has already been resolved - the plant will become a part of the state corporation in the future. And, here is a surprise, former Head of the plant Vadim Rybin recently headed the Board of Directors of JSC Techmashservice — a sales company of Rostec enterprises. And the court acquitted Shumskiy, which is an incredible rarity for Russian judicial practice. It seems that everyone "agreed" with each other. 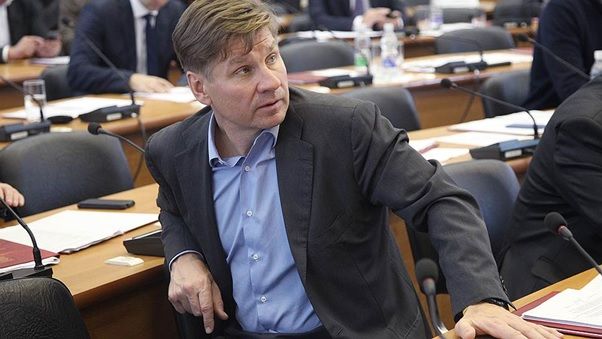 Shumskiy escaped with a slight fright

But there are still questions. The fact is that in the spring of 2018, the plant was raided by FSS employees who conducted a large-scale seizure of documents.

After that, it was reported that the security forces found serious management abuses. According to the Nizhny Novgorod online publication, the investigators found evidence of the money withdrawal by the Deputy General Director of the plant Yury Shumskiy in offshore companies and the employment of "dead souls". Also, the security forces allegedly found schemes for obtaining funds through shell companies: some sold raw materials and property to the plant at an inflated price, others purchased finished products at a low price. In particular, the new management did not buy electricity directly from TNS-Energo, as it was before, but through intermediaries. The total profit of these companies was approximately 120 million per year.

In addition, the partners, allegedly, accused the Plant named after Y. M. Sverdlov of supplying low-quality raw materials - they say that the company could buy resins in China and sell them as its own products.

However, no criminal cases followed this resonance check. It seems that the purpose of all these measures was simply to "press" the management so that the plant would pass to Rostec. Apparently, when the necessary documents about the "dealings" of Rybin and Shumskiy were in the hands of the FSS, they had no choice but to retreat.

Many people assumed that Rybin and Shumskiy would leave the management of the Plant named after Y. M. Sverdlov. However, Yury Fedorovich did not leave the company and headed it. Although there hardly remained any trust in him…

For example, in 2018, something strange happened to the plant. The accidents at the plant were reported.

On April 5, 2018, a tank that was allegedly carrying methanol derailed on the plant's access tracks. As a result, the toxic substance spilled into the environment.

Just three months later, on July 5, it became known that a workshop belonging to dangerous production facilities collapsed at the plant.

And in August of the same year, an explosion occurred at the defense plant when workers were destroying ammunition. A fire started, and as a result, six people died, and as many more were injured. Material damage reached 48 million rubles, a criminal case concerning this fact was initiated and it is now being considered in court, as NewsNN.ru wrote.

All this surprisingly coincided with the news appearing in the media about the shocking compromising material found by the security forces on Shumskiy. Evil tongues have already begun to suppose that the management is trying to get rid of some evidence using such radical methods. This was written by Versia.

What if the security forces visit the subsidiary of Rosgeologia, the dispute over the stocks of which continues to this day? There is a feeling that they can discover a lot of interesting things. Let us hope that this will not start a series of emergencies at the Permneftegeofizika enterprise…

03 June, 17:31
Does Kiriyenko filter the "waste" through Lebedev?
See also