Will Polosukhinskaya Mine bring its new owner Vladimir Golubev to what his predecessor Alexander Shchukin eventually came to?

According to the correspondent of The Moscow Post, the Arbitration court of the Kemerovo region granted the claim of the regional Ministry of Natural Resources and Environment to recover 43.8 million rubles from the Polosukhinskaya Mine JSC for damage caused to the Bezymyanny stream. It turned out that the company carried out excess dumping of polluting water into the stream in 2018. Will arrested oligarch Alexander Shchukin be charged with a new fine? Or will the new owner of the enterprise, a "reputable" businessman Vladimir Golubev, pay for it?

In the summer of this year, it became known who got the Polosukhinskaya Mine of Alexander Shchukin, who is under investigation. The new owner is RusugolHolding LLC from St. Petersburg, the sole founder of which is Cyprus Stirakia Holdings Limited. The shareholders of the offshore company, as reported by Forbes are Murad Burguev, former Vice-President of the Russian Federation for diving, and Vladimir Golubev, co-owner of the Adamant Holding. Did the latter decide to try out another new industry?

It seems that Mr. Golubev generally likes to test himself in something new - he recently acquired Spetspromkompaniya LLC, which owns a greenhouse complex for the production of strawberries in the Moscow region. However, as spiteful critics say, even going into new areas for themselves, he continues to work in the spirit of the "dashing" 90s, which was the start of his career as a merchant.

However, he could have built a "base" for successful business activities even under the USSR Secretary General Yuri Andropov. As FLB wrote, back in the 80s, he received criminal records for theft, burglary and robbery and served more than one prison term. It was probably then that he received the nickname "Barmaley" in certain circles, as Forbes wrote.

In addition, at the same time, he could meet a number of influential people who provided him with success in business. According to the authors of the MZK1.RU portal, allegedly among his comrades there were members of the famous Tambov OCG.

According to rumours, Igor Leitis and Mikhail Bazhenov, who founded the Adamant Holding in 1992, are no less "authoritative" guys. Soon the duo turned into a trio - Golubev entered the business. To this day, he is primarily known as the majority shareholder of the Holding, one of the largest owners of commercial real estate in Russia.

The business of the three friends developed rapidly: in fact, they did not start with "real estate", but with... toilet bowl sales! But in a very short time they began to engage in real estate, and by 1997 they controlled a whole network of St. Petersburg markets near the metro station. At that time, this business was very profitable and, accordingly, attracted the attention of criminal structures. May it  be supposed that Adamant should have been in touch with them, too?"

There was confrontation in this case. Thus, entrepreneurs got the right to lease land at the Ulitsa Dybenko station, but spontaneous owners of stalls did not want to leave their places, the local police Department threw up their hands — as if, solve it yourself. And they solved: one night, Leitis fenced off the market with a concrete fence and cut off the electricity, this was told by Leitis himself to Forbes. So, does it mean that it is quite normal for Golubev and his partners to use harsh methods? In those crisis years, such solving could lead to the plight of dozens of families… 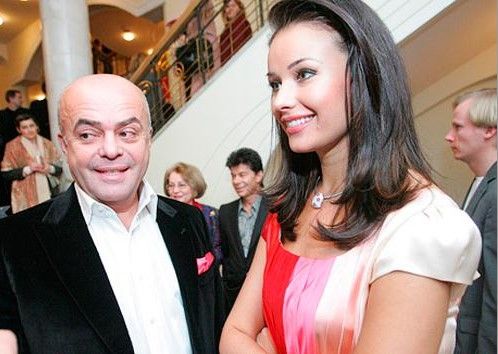 Apparently, Golubev considers such methods of work to be appropriate to apply in our days. It is rumoured that he had his eye on Mirax, one of the assets of businessman Sergey Polonsky,  he wanted to give his son Maxim Golubev its share. Polonsky denied it and, according to the authors of the MZK1.RU portal, an influential businessman Roman Trotsenko allegedly joined the case. But it was all in vain.

According to rumours, this is why Polonsky ended up behind bars - as TASS wrote, he was sentenced to five years for embezzlement of about 2.6 billion rubles. Spiteful critics even attributed participation in this case to Gennady Petrov - a St. Petersburg entrepreneur, whom detractors associate with the criminal world.

Last year, information leaked that he partnered with another "reputable" businessman - God Nisanov. According to the authors of the VCHK-OGPU telegram channel, allegedly with the help of Golubev, Nisanov can withdraw funds from the Sadovod and Moscow markets abroad. A good company gathered around the shareholder of Adamant, didn’t it?

It seems that the new owner of the Polosukhinskaya Mine has chosen to match the old one. For a long time, the market was wondering - who would get Shchukin’s coal asset? There was a rumour that he would just take one of his relatives into the business.

The transfer of the asset was allegedly handled by Shchukin's son-in-law, Ildar Uzbekov, who has been living in London for many years. As Forbes wrote, he has been looking after his father-in-law's business since 2016. Shchukin is now under investigation on charges of extorting 51% of the shares of JSC Razrez Inskoi in the amount of about 1 billion rubles, as TASS wrote.

In 2013, Uzbekov joined the Board of Polosukhinskaya Mine. He seemed to have wrapped the deal with Golubev. In April of this year, RusugolHolding, registered in February 2020, became interested in the enterprise - that is, specifically for the purchase of a coal company. The CEO there is still a certain Kristina Pantelimonova, who is probably a figurehead - the lady has no more assets. At the same time, the purchase of Polosukhinskaya required almost 2.7 billion rubles — how could a businesswoman with a single firm with an authorized capital of 100 thousand rubles collect such a sum?

But the more prominent businessmen still had money. It is likely that Uzbekov "wrapped" the business of his father-in-law, and then began to offer it to potential purchasers. This explains the fact that initially the same Pantelimonova was listed as the founder of RusugolHolding, and only in the beginning of May the company was joined by the offshore Stirakia Holdings Limited, of which Golubev is a shareholder.

It is noteworthy that since mid-June, the share of the Cyprus office has been pledged to Bank Saint Petersburg. Could the "operator" of the transaction be head of the credit organization Alexander Savelyev? Also, by the way, not the last person in St. Petersburg, where Golubev, as we can see, is well settled.

By the way, another Shchukin’s asset is now under the control of a foreign company - the Gramoteinskaya Mine is now controlled by the Cyprus Cyrith Holdings Limited. Is another business, in case something happens, ready for probable sale?

By the way,  it seems, Shchukin could get Gramoteinskaya Mine, not in a quite honest way. As Versia  wrote, he could simply take over the asset from the British Private Investment Fund Lehram Capital Investments Ltd. Did Golubev and Shchukin agree on their preferred methods of doing business?

Apparently, this is why Golubev was not afraid to enter the scandalous asset - Polosukhinskaya appeared in a number of "muddy" stories. As reported by the same Versia, back in 2008, the company could take a loan amounting $8 million from Shchukin’s Sibuglemet Impex Ltd. In 2015, The Arbitration court ordered to pay this amount plus interest on the loan - a total of $15 million. But the funds were not to be sent to Sibuglemet Impex Ltd, but to some unknown office that is registered in Nicosia. Did the money flow straight into the pockets of the Shchukin family?

Novaya gazeta reported that in 2011-2012, Polosukhinskaya, trying to avoid paying taxes, paid huge dividends in the amount of 3.3 billion rubles to the Cyprus Bryankee Holding Limited.

Thus, Mr. Shchukin managed to get away from the law for a long time - he still has a lot of "merits" on his account, which were previously written about by The Moscow Post.  But this can’t last forever!

It’s possible that Golubev, along with Shchukin's asset, may get the "criminal" karma! Presumably, he will conduct business in the best traditions of his predecessor, won’t he? Or, having learned from someone else's experience, will he try to behave more modestly?