The editors of The Moscow Post received documents on how billions were withdrawn from the Novopokrovsky design bureau through fictitious non-refundable loans.

As many as 19 organizations could take part in the "sawing scheme" of Novopokrovsky Bank under the leadership of Alexei Demyanov and the Knausov brothers and with the participation of our long-time heroes Yevgeny Bernstam and the Shandalov brothers.

This was reported to the Editorial correspondent by our source who provided the documents.

In September 2020, the Tverskoy District Court of Moscow arrested Mr. Demyanov on suspicion of embezzlement from a credit institution of at least 100 million rubles, and at the beginning of last year he was brought to subsidiary liability in the amount of 2.5 billion rubles. This was reported by Kommersant.

But it turned out that the charges brought against Demyanov may not be all that he (and, one must think, Knausov) can be convicted of. According to our source, "Demyanov concealed episodes of theft of a criminal group created by him, including through Basizgazpostavka LLC funds by issuing deliberately non-refundable loans that were" cashed out "on the same day. The amount stolen exceeds 300 million rubles. "

Allegedly, for these purposes, Ivan Pozharsky (the head of VK Consulting, through which documents could be forged) attracted Pshenichnikov, who was registered as general director and owner of Bazizgazpostavka LLC. He served in this position from 2016 to 2019. Now listed as the owner of the company.

In 2020, Vladislav Elizarov's company was charged 3.3 million rubles in favor of the allegedly washing structure of the former and current owners of Novopokrovsky, Basizgazpostavka.

The source also claims that he has a record where Demyanov openly confesses that he created the Basizgazpostavka company to steal funds from the bank. And again the question is - where is this testimony in the case? At the same time, "Basizgazpostavka" received non-strong contracts from the Ministry of Internal Affairs and other structures. Two of them are still under execution, despite the expired deadlines.

From the information provided, we also became aware of other legal entities for which fictitious non-refundable loans could be issued. According to Elizarov, the nominal leaders of these legal entities are intimidated by both Demyanov and law enforcement agencies, whom he and his accomplices allegedly bought.

Below is a table with a list of such legal entities: 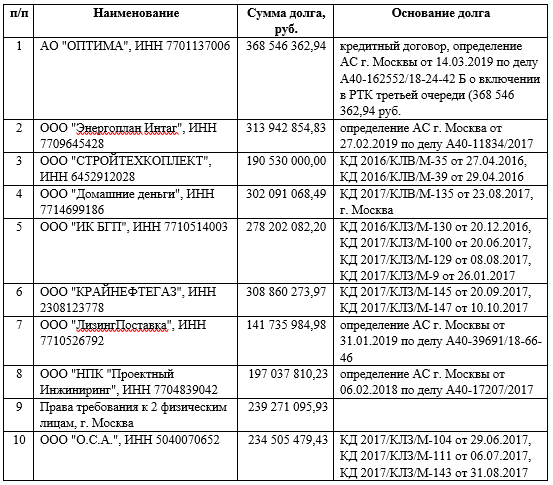 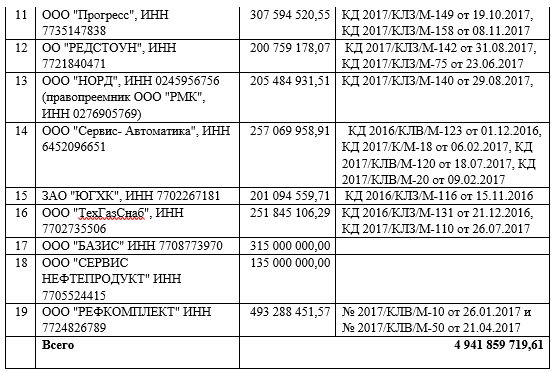 Photo: provided by the reader of The Moscow Post

Among them there are extremely curious firms. For example, House Money microfinance institution. It too in the course of bankruptcy. In founders of office offshore "HRUVANTA HOLDINGS LIMITED". Evgeny Bernshtam is considered the beneficiary.

Behind the company whole lots of scandals. As Fontanka wrote, "House money" could be involved in not the most ethic ways of collecting debts. Among them: extortion, arsons of baby carriages, drawing sepulchral crosses on doors and sticking of leaflets. Evgeny Bernshtam, by the way, owned also the collection agency "Sekvoya" which differed in very rigid methods of knocking-out of money from clients.

In 2018 she refused to redeem the bonds shown to the offer for the sum of 800 million rubles, having allowed a technical default and thus having put investors in very doubtful position which many call just direct deception.

Right after emergence of information on the presented plan for restructuring issue of bonds of "House money" it became known of euthanasia of the board member of IFC Youri Kotler. It was found in the apartment with a gunshot wound in the head. A row found the suicide note from which followed that Kotler had personal problems. Its credit debt to VTB - 48 million rubles could be one of them. Whether Bernshtam's decision became a rupture of the last thread that gave hope that everything is formed to the manager?

As a result of Bernshtam accused of creation of a financial pyramid, "House money" went bankrupt, and investors who did not manage to run away lost "with a chipped washing-tub". In the course of bankruptcy the structure showed sick requirements of hundreds of millions to Russian Standard of Rustam Tariko, challenging the bargains on a cedation of the rights of requirements which are earlier concluded between them. Rumors went that all these manipulations were not absolutely lawful and were made to add in Tariko and Bernshtam's pockets. The Moscow Post in detail lit this story.

Well, now can "run" over Bershtayn and Tariko also for the help in withdrawal of money of Novopokrovsky?

In the list there is one more entertaining office – the JSC Optima company. Through LLC Miranta (former founder of Optima) it is connected with Valery Shandalov. According to "Version", beneficiaries of Optimy Group (from the same structure, as the joint-stock company) are also Valery's brother Andrei Shandalov and their partner – the citizen Kiselyov.

Optima Group appears in the case of fraud and non-payment of taxes. And also it in 2013 took from Gazprombank an investment loan for $35 million which did not return, subsequently having gone bankrupt. At the same time once Optim entered a 20-ka of the largest IT companies in Russia!

Here what is written about it by "Version": "Through controlled legal persons the beneficiaries of bank stole the means received from Gazprombank, and Optima the easy handle, it turns out, made bankrupt, trying to hide the ends in water. The general damage to contractors and bank is estimated more than at 8 billion rubles".

At the same time the name of Andrei Shandalov "shone" including in the history with attempt to profit on a cut of the Russian power, having taken away in own favor Energostrim holding. Here too it was not without loans which were allocated to the organizations potentially controlled by Shandalov' family. And, naturally, were not returned.

Energostrim initiated lawsuits, in parallel in network Shandalov's correspondence with the financial director of Optima Group Kirill Zatsepin who organized creation of fly-by-night companies in the Optima group flowed away. Judging by a context, money was moved offshore.

Often worked with Shandalovy according to the scheme: to borrow, not to return, and then under contracts of a cedation of the rights of requirements to the related offshores to receive control over bankruptcy of the companies debtors. The Moscow Post in investigation "Andrei and Valery Shandalovy in detail described the scheme hide the ends in Udmurtia. How to remit to itself a debt in 27 billion rubles"

Shandalova, according to the latest data, live in Austria. But business continues to be run, it seems, in Russia – helping other bankers to remove billions in "jugs"?

But we will return to the list. The most part of the companies which are listed or bankrupts, or go to it. Except for "North" – this organization is excluded from the register of legal persons because the information about her is doubtful. And Tekhgazsnab – still works though, according to the latest data, there are decisions on partial or full suspension of transactions on the accounts by tax authorities. 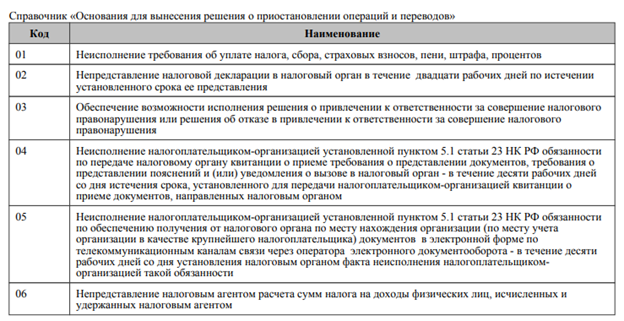 Also, SNP LLC, designed for Inna Pozharskaya, is still operating. Potentially spouse or relative of Ivan Pozharsky. True, the woman filed a statement about the inaccuracy of information about her as a member of a legal entity. But such information is not taken from the ceiling.

At the same time, almost everyone has a certain number of government contracts. Often - very solid.

The same JSC "Optima" was a supplier in 179 state contracts in the amount of 9.6 billion rubles. They ordered from her the structures of Transneft and the Ministry of Defense.

From 3.8 billion rubles in revenue in 2017 by 2019, Optima was at zero. This asset last year became a lot at the auction of Novopokrovsky's property. 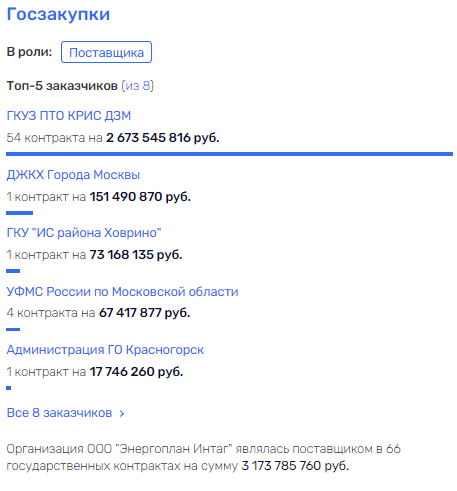 But the contracts of another organization from the list. Photo: https://www.rusprofile.ru

The remaining assets listed in the table suffered the same fate. 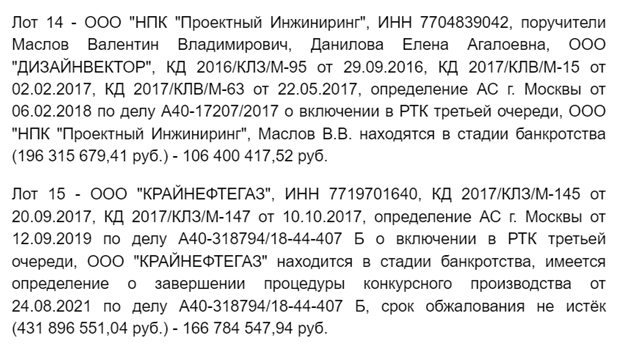 At the same time, not all contracts that these societies took over were fulfilled. Customers in total suffered losses of hundreds of millions of rubles.

The founder of one of the firms on the list, LLC NPK Project Engineering, Maslov Valentin Vladimirovich (or his full namesake) in 2016 became a defendant in a lawsuit over non-payment of credit funds to the Moscow Small Business Lending Assistance Fund.

Rosinterbank also appears in the case, from which Maslov acted as a guarantor. Recall that in 2022 the court declared this bank bankrupt and brought to subsidiary liability in the amount of 65.83 billion rubles the former deputy chairman and member of the board of directors of the bank Ramil Zakerov.

It seems that people in the company, potentially used to withdraw money from Novopokrovsky Bank, were recruited wisely. And the scheme turned similar?

Our informant also sent all the data on organizations to the Prosecutor General Krasnov. If the case is given a go, Knausy and Demyanov can even hear the call of distant edges from abroad, where they are rumored to be now.