Sergey Bachin, famous for his ability to earn money on projects, even if the customer is not satisfied with everything, can get an appetizing business in the agricultural industry.

According to a correspondent for The Moscow Post from the Yaroslavl Region, VEB.RF is bidding as part of the bankruptcy procedure for a large agricultural enterprise Voshchazhnikovo in the Yaroslavl Region. Bankruptcy was initiated by a bank to which the company owed 7.5 million rubles. True, the publication "Agroinvester" claimed that the company could be saved from bankruptcy. Nevertheless, the procedure was still launched. And now it is likely that the assets of Voshchazhnikovo may withdraw to the Agrivolga company, which is controlled by Sergey Bachin, who is considered close to the head of VEB Igor Shuvalov.

More recently, Voshchazhnikovo was listed among large Russian dairy farms with almost one and a half billion revenue, according to Rusprofail, the company gave such indicators in 2018.

The company "Agrivolga" with such achievements has not yet managed to become famous. It was registered in June 2007, among its founders - five interconnected legal entities, which, one might say, gave birth to each other and eventually formed a common network, and their ultimate beneficiary is Sergey Bachin. By the way, the entrepreneur's predisposition to agricultural activities was embodied in the book "Organic. Myths and Reality, "which came out under his authorship and is dedicated to organic agriculture.

Agrivolgi's financial situation is interesting: the company has shown stable profit growth since 2013, but after 2019 it began to "subside." The assets of Voshchazhnikovo were just enough for her "resuscitation." 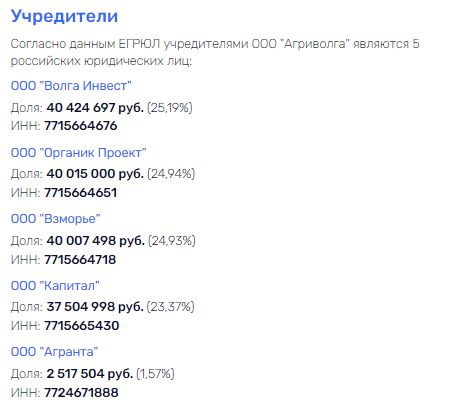 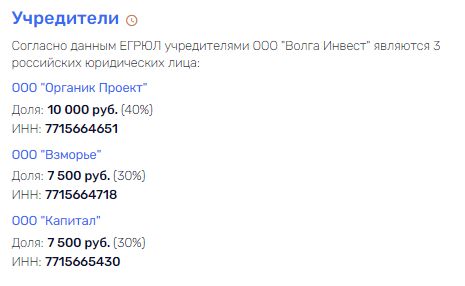 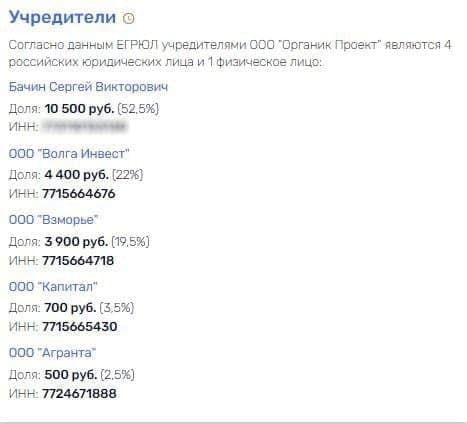 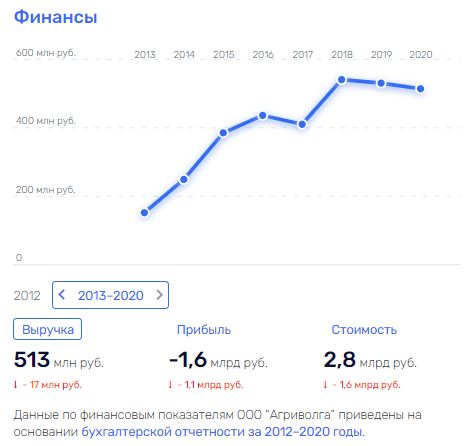 We have written about Sergey Bachin many times. The businessman has many development projects, some of which raise a lot of questions. For example, during the construction of a residential complex in the village of Pavlovo-2 near Moscow, his company violated the lake and swamp ecosystem and destroyed the "oasis" under the windows of the townspeople. And this despite the fact that the "view of the lake" in the advertising of the complex was painted almost the main advantage. People then addressed directly to the governor of the Moscow Region Andrei Vorobyov, but he not only did not punish the perpetrators, but in general did not even respond to the complaint. 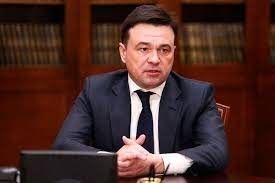 Apparently, the entrepreneur managed to charm the ex-governor of the Yaroslavl region Sergey Yastrebov. Otherwise, how to explain the fact that in 2012 the governor concluded an agreement on socio-economic cooperation with Bachin and actively accepted his project "Yaroslavl Sea"? And in 2016, Yastrebova even allocated 56 million rubles for the construction of far from the most strategically important bridge in the Uglich district, where the businessman's assets are located. For comparison: for the repair of all regional roads, Yastrebov in the same period managed to cross only 36 million from the budget. The close connection of the former Yaroslavl ex-governor with Bachin is also indicated by the act that Yastrebov's daughter owns real estate in a residential complex built by the businessman's company. 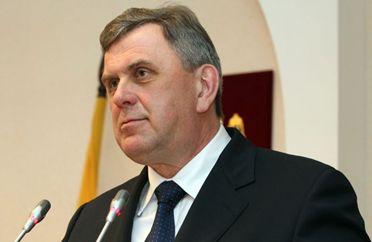 In 2019, Bachin entered into an agreement with the Interros group of Vladimir Potanin on the construction of the Three Volcanoes tourist cluster in Kamchatka. This was reported by TASS. A significant part of the investment in its implementation should be allocated by the state. If we recall the experience of his activities in the village of Pavlovo-2 near Moscow, then it is perhaps time for residents of Kamchatka to start worrying. 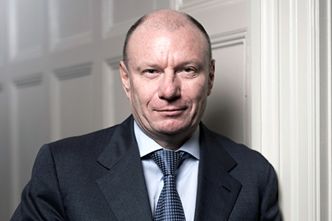 With Igor Shuvalov, Bachin also works for the first time. VEB has already allocated money to its companies for the construction of a garden city in the Tver region. 3.4 billion rubles in fact "flew into the pipe," because the project turned out to be unprofitable, which is not wise at all. The Tver region is not the most attractive place for rich tourists to relax, on which a new complex was designed. And even after such a dubious result, the businessman was still entrusted with such a responsible project as the Rosa Khutor ski resort and the Olympic village. Work on them was accompanied by constantly new monetary subsidies from VEB. As a result, VEB invested 55.7 billion rubles in this project. Bachin did not return the loan, instead giving Shuvalov the construction company ProfEstate, whose asset price, according to Rusprofail data, did not cover half of VEB's costs. 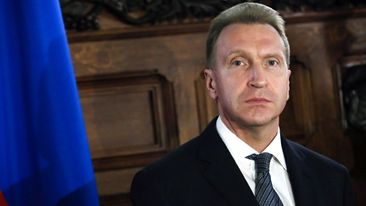 Why Shuvalov so favors Bachin is an open question. Perhaps behind Bachin's back is someone even more powerful than the head of Vnesheconombank. In favor of this version is the fact that Bachin is a native of the American company Pratt & Whitney, specializing in the production of aircraft engines.

Interestingly, before starting his career in a company that has a secrecy stamp on its forehead, Bachin lived in the USSR. How he ended up at Pratt & Whitney, no one can explain. It seems that the entrepreneur has always had good connections, which he has not lost to this day. A couple of years ago, Bachin even helped an American company acquire the assets of Russian competitors. And no sanctions to them then became a hindrance...

"Abroad will help us"

The ultimate owner of Pratt & Whitney, in which Bachin began his career, is United Technology. This is one of the largest financial and industrial groups in the United States. About half of its revenue from the sale of products and the provision of services is made up of the federal client sector for servicing military orders. There are also foreign clients. In the 80s of the twentieth century, this company was steadily included in the dozen largest contractors of the US military-industrial complex in terms of order volume. A firm of this level clearly has direct ties with the country's leadership. Is there an influential Bachin lobby?.. 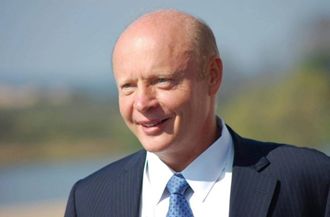 The entrepreneur's connection with "abroad" is also indicated by the fact that the assets of the company "Lira" (the right predecessor of LLC "Agranta," the "daughter" of which is "Agrivolga"), are partially located abroad. By the way, just through this offshore British company Lantsalima Investments Limited, Bachin, if he wanted, could well withdraw the funds that he "earned" in Russia with the blessing of the governors of the Moscow Region and Yaroslavl Region and VEB. 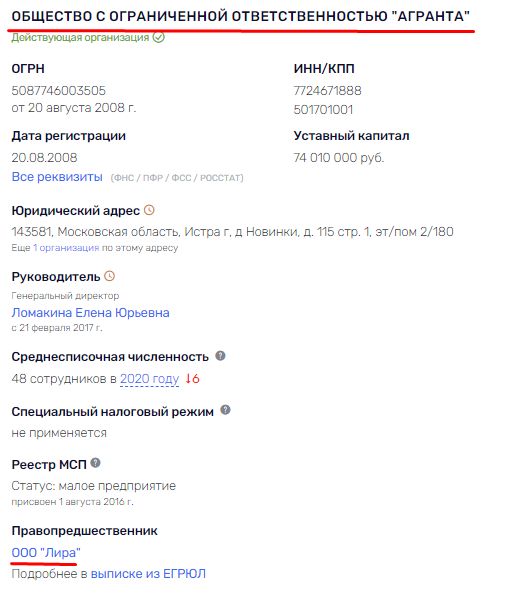 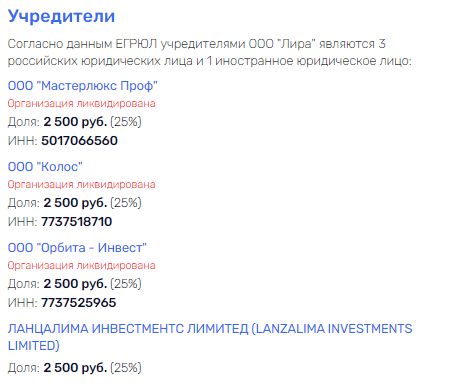