Does Oksana Luth, Deputy Minister of the Ministry of Agriculture of the Russian Federation, distribute budget money to "lured" structures with the help of industry unions?

Previously, Luth headed the CRM and Corporate Business Development Departments of JSC Russian Agricultural Bank, that is, she worked "at the side" of its former head, and now the Minister of Agriculture-Dmitry Patrushev. Now she is working hard in the Department which is headed by him. Are the friends working together?

Strange things began to happen in the Ministry of Agriculture in 2018, when Dmitry Patrushev took over as Minister. His first and large-scale work was the development of a system of unions. That is, all companies in the sector joined unions, they differed in the nature of industries (poultry, grain, milk, etc.).

The new rules of the game obliged companies to pay membership fees, and in return receive state support in the form of subsidies. These money flows from companies are, in fact, controlled by Oksana Luth.

After the organization of industry unions, the Russian Union of Grain Exporters was established. Didn't they get themselves confused there? It was created by the largest grain-producing companies - Aston, RIF, UGC, Glencore. It is said that this Union was created for the promotion of RIF, Aston and Sodrugestvo.

In 2020, the Russian government introduced quotas for the export of wheat, rye, barley and corn. The RIF and Aston companies received a large part of these quotas. After these changes, Sodrugestvo  practically became a monopoly in the grain-producing industry as well.

It was rumored that ships were being held up in ports for unjustified reasons, and all suppliers' contracts were being delayed or disrupted. All except Sodrugestvo. According to rumors, the vessels were issued by Ms. Luth on personal orders.

These strange changes suggest that she may receive a percentage of grain exports. Spiteful critics put forward a version that each company could pay off $ 1 from each export ton to Ms. Luth.

For example, RIF sent 5.4 million tons for export of and Aston - 3.3 million tons. Could some of this money settle in Luth's pocket?

In pursuit of grain

As it can be seen, the RIF company of Petr Khodykin and the EkoNiva company of Stefan Duerr stand out among others.

It is rumored that Duerr's EkoNiva company began actively buying up agricultural land and companies in 2019. So he became the owner of the SoyuzMoloko company. It is curious, why did it work so fast? It is known that the Russian Agricultural Bank financed several major projects of EkoNiva, this is reported on the official website of the Bank.

Once Luth, like Patrushev, was at top of the Bank. And it seems that Duerr's company started receiving payments back then. Did Luth continue to help the "milkman" from the new chair when she moved to the Ministry of Agriculture? Perhaps, now he is thanking her profusely for being in her "unions".

But the RIF company of Petr Khodykin took off without the help of any banks there. But, it seems, still not without the participation of patrons.

Once Khodykin appeared at an World Investment Forum, he was noticed in the company of  then Governor of the Rostov region Vasily Golubev. At the same time, rumors began to spread that Golubev was his close friend and patron.

At that meeting, investments in the construction of additional capacities for the Azov Grain Terminal complex from Promekspeditsiya were discussed. The latter is owned by HAMAIKO LTD LAPARKAN INVESTMENTS LIMITED – the same offshore company that manages the RIF company. 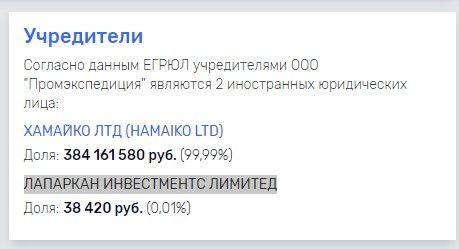 There have been rumors about Golubev and Khodykin's connections for a long time. Their warm relationship can be judged by more and more deals. This year, RIF TH, acquired large agricultural enterprises in the Rostov region. Is friendship cemented by contracts and money?

Now it is not surprising that Luth focuses on Khodykin and his RIF, the company is doing everything possible to achieve super profits and set record indicators. Naturally, no one cares that they can be to the detriment of society, the country's economy or someone else.

In 2018, there was an export scandal. RIF  sent record amount of grain for export – 4,5 million tons. And all this was against the background of big harvesting problems in several regions of the country that year. And what is the point of refusing to export, if there are super profits behind it?

Thus, Khodykin provoked an increase in the price of bread in many regions of the country. All these events forced the FAS to look at the grain-producing company in a new way and conduct an inspection.

Let us calculate the funding losses.

Such cases could not go unnoticed. The Accounting Chamber was interested in how funds were used in the Rostov region. Attention was drawn to the fact of a large amount of subsidies for a limited number of recipients of state support.

Everything is simple here. Companies that can pay membership fees to Luth remain afloat. And the rest are simply trampled at the initial stages.

Naturally, there are no guarantees. But this is strange, subsidized companies are the market leaders, and in fact it turns out that these leaders can not reimburse part of the interest rate on investment loans. Question: where did the money go?

This was also stated by the auditor: "So, at the end of 2018, a number of major organizations-recipients of subsidies to reimburse part of the interest rate on investment loans, which is almost 1 billion rubles, either did not complete investment projects, or did not reach a break-even level of activity," the AC website reported.

The Rostov region has many problems with the Accounts Chamber. For example, the inspection showed that the Ministry of Agriculture violated the conditions for granting subsidies to the Rostov region.

According to the auditors, at the end of 2018, the indicator of the state program of the Rostov region "index of livestock production in farms of all categories" was not reached and amounted to 95.5%.

The audit of the Accounts Chamber revealed financial irregularities in the use of subsidies for 447 million rubles. And, what a pity, the Ministry of Agriculture had 380.5 million "losses". The use of the remaining amount was violated in the Rostov region.

Though the Ministry of Agriculture reported that the head of the Rostov region was sent demands for the return of funds to the Federal budget.

It seems that  it is time for the Department headed by Patrushev and his assistant Luth to moderate  appetites. After all, first the audit is conducted by the Accounts Chamber, and then, perhaps, the security forces will join. Does it look like they're already interested?

20 April, 8:17
Is milk on the lips already dry or is EkoNiva on the verge of bankruptcy?