Could it be that the new owner of the largest oil trader Rosneft, Marina Karmysheva, is behind a whole network of offshore offices, through which businessmen from different regions of Russia probably "launder" the money of state-owned companies?

QHG Trading, which supplies oil to Rosneft, has again changed its owner. Instead of Investneftetrade of Sergey Nevsky, who in late November was arrested on suspicion of bribery, the owner of QHG became a citizen of Cyprus Marina Karmysheva. She owns the RLA Group, which is also engaged in the trading of oil and petroleum products. Karmysheva also owned a stake in Elecsnet, where Rosneft and MKB are now shareholders, but the companies deny any connection with the businesswoman. That's only if you the entire scheme of ownership is studied, it becomes clear that the "threads" from entrepreneur can lead to a whole web of offshore schemes. It is possible that the funds created for the "laundering" of Russian state-owned companies.

The correspondent of The Moscow Post tried to study a "foreign" story, where the head of state corporation Igor Sechin "shines".

At the end of November, QHG Trading was transferred to the Cyprus companies Nestan Ltd and Inversos Ltd, which are backed by Marina Karmysheva. The sudden change of ownership is understandable - after the arrest of Sergei Nevsky, Rosneft probably hastened to disown the company with a scandalous reputation. Especially as The Moscow Post found out, Investneftetrade was associated with offshore companies from the so-called "Panama Archive", through which, perhaps, money could be withdrawn. It turned out that the firm of Nevsky is tied to a foreign “intermediary” businessman, whose services are probably used by odious businessmen throughout Russia.

That's just changed, as they say, "to trade bad for worse" - Mrs. Karmysheva is also seen in relations with suspicious foreign offices.

There is also something in common between Nevsky and Karmysheva - both have connections with the Region of Sergei Sudarikov. And the latter is considered a person close to the head of Rosneft, Igor Sechin. In addition, both could at one time cooperate with Roman Avdeev from Rossium, who is also the founder and member of the Supervisory Board of MKB (Credit Bank of Moscow). Avdeev is also included in Sechin’s inner circle.

The fact is that Nevsky owns through Investneftetrade 70% of the Algorithm Fuel Integrator, the remaining 30% are in his direct possession. According to Interfax, the businessman received a controlling stake in AFI from the Region group. The share of Nevsky in the Investneftetrade is pledged to the MKB. Does it seem, or his connection with businessmen close to Sechin is by no means accidental?

It may not be accidental for Marina Karmysheva. According to one of the sources of Kommersant, a person with this name "worked for a long time in the company, and now he is engaged in his own business, "including" possibly managing other people's assets." However, the state corporation itself denies any connection with the businesswoman. According to the list of persons under the control or significant influence of which the NCI is in 2017, Karmysheva owned 2% of the NCI Moscow Clearing Center (now Elecsnet; the main shareholders are MKB and Rosneft). By the way, among the shareholders there was also Sergey Sudarikov. 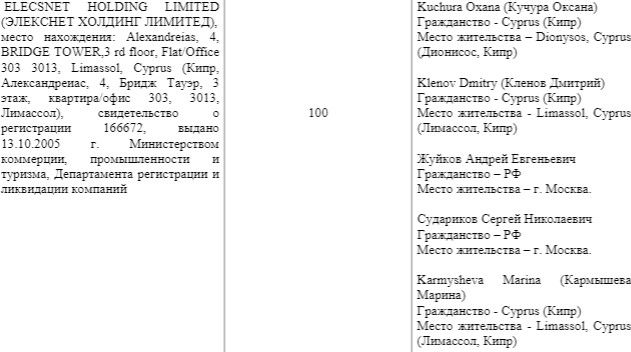 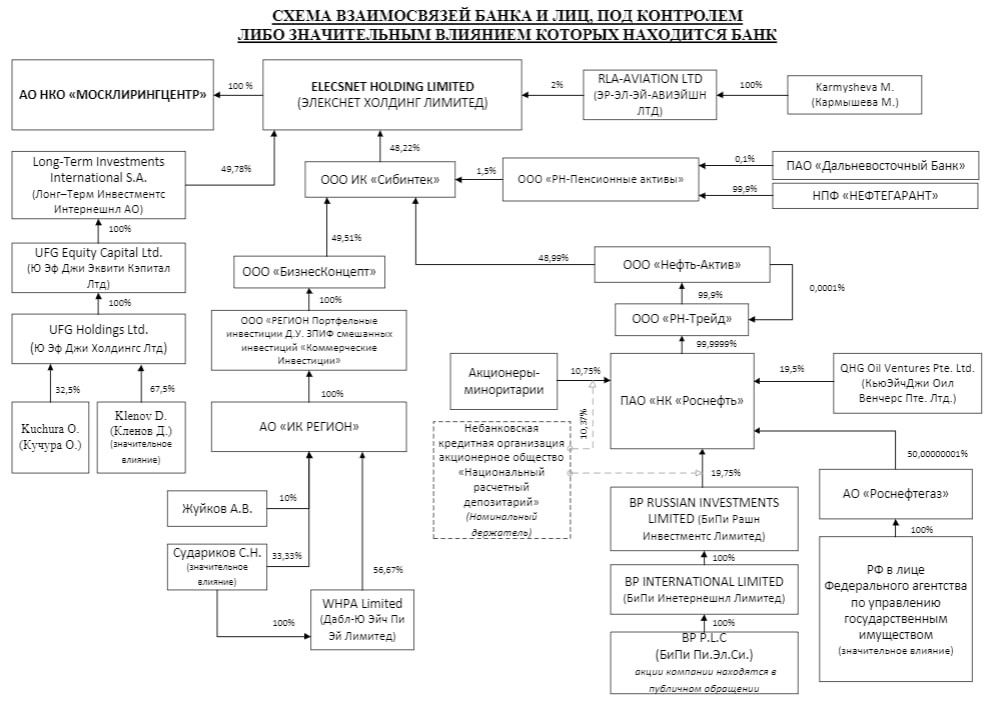 So does it mean that both Karmysheva and Nevsky can be people associated with the head of Rosneft Sechin? What if in fact they just represented his interests, that is, he may be the ultimate beneficiary of their firms? The fact that both entrepreneurs have ties with Sudarikov and Avdeev looks too suspicious.

Karmysheva is a very interesting person. She owned a stake in the Moscow Clearing Center through RLA-Aviation Ltd. (later renamed RLA Limited). According to the data of Maritime Directory, RLA-Aviation Ltd owned the Mikhail Trubyatchinsky vessel, which is engaged in seismological surveys. According to various sources, at one time the vessel was registered in Panama, the port of Murmansk and St. Petersburg and was in the fleet of JSC Marine Arctic Exploration Expedition, as stated on the official website of the company.

Among the official partners of MAGE JSC there are Rosneft, Total, and Gazprom. According to Rusprofile, the office has contracts for almost 24 billion rubles, of which almost 3 billion was provided by the state corporation headed by Sechin. The first contract with Rosneft dates back to 2015. So does it mean that Sechin has been working with Karmysheva for a long time?

According to the Opencorporates portal, M. KYPRIANOU FIDUCIARIES (CYPRUS) LTD is listed among the officials of RLA Limited. This firm, according to the official website, is engaged in legal support of firms located abroad: they have offices in Cyprus, Greece, Malta, Ukraine, the United Arab Emirates and the United Kingdom. In fact, they organize an "entire" business. Is it for those who want to "master" money at home with the help of foreign firms?

if so, then the case is put on the "stream". After all, according to the Opencorporates database of foreign companies, the company participates or has done so at various times in almost 1.8 thousand companies! Of these, 1 789 are registered in Cyprus, and 4 are under the jurisdiction of the United Kingdom.

And, apparently, M. KYPRIANOU FIDUCIARIES (CYPRUS) LTD closely cooperated with Karmysheva: in most of her Cypriot assets, this office is listed as a participant. Including INVERSOS LTD, through which Karmysheva gained control of the trader QHG Trading. 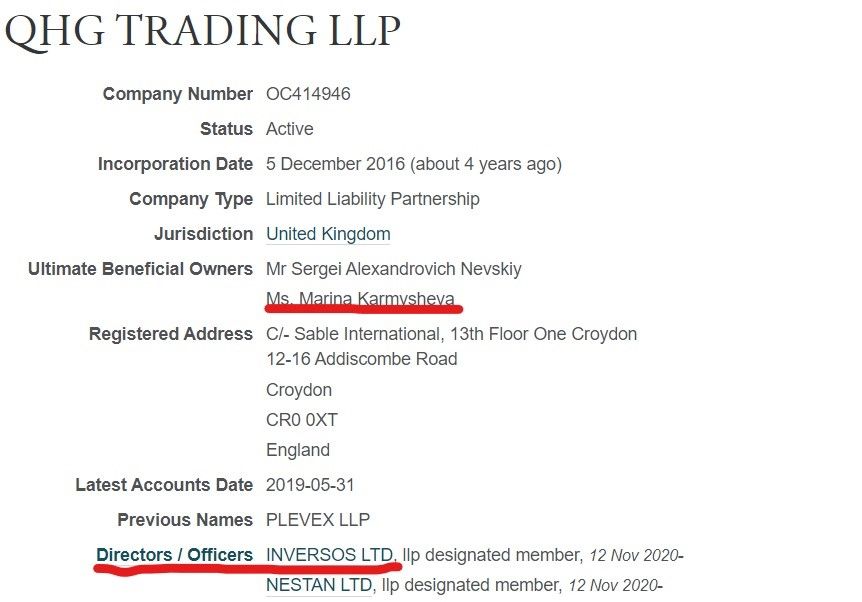 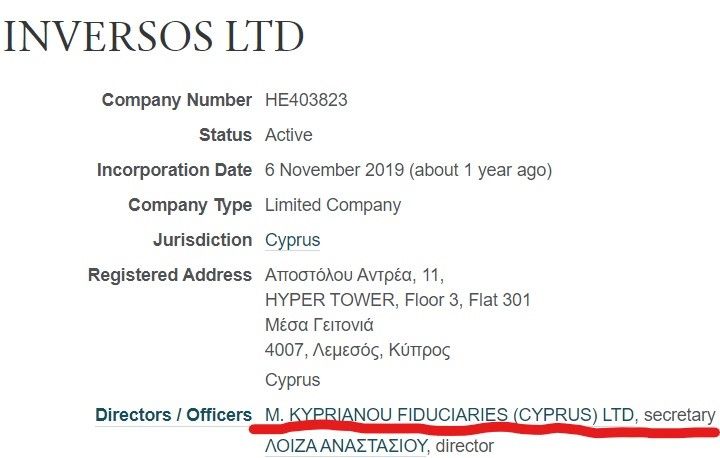 But among the Russians, Cypriot lawyers from M. KYPRIANOU FIDUCIARIES (CYPRUS) LTD cooperate with other prominent merchants too. For example, with Peter Fedorov, the founder of EPL Yakut Diamonds LLC. The co-owner of this company is the Hammarby Limited from Cyprus, the director of which is the Yakut businessman. 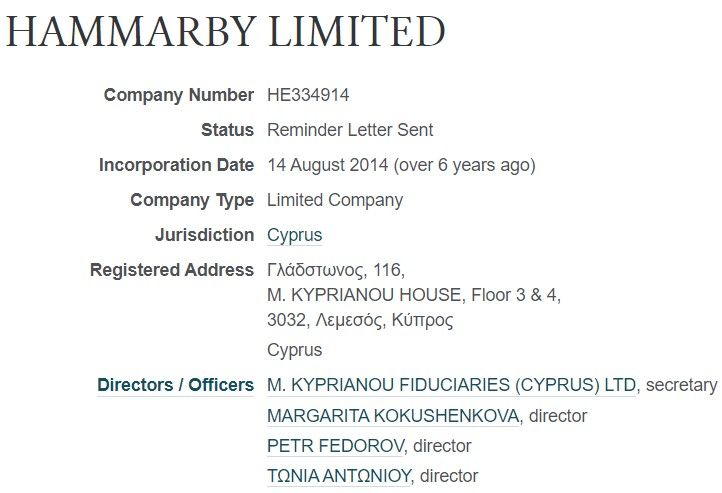 And there are some suspicions that "diamond king" could withdraw the money through his foreign asset. In particular, the company controlled by him Skupka Brilliant I Zoloto LLC in the absence of employees and revenue from somewhere took a profit of minus a thousand rubles. Under the control of Hammarby Limited EPL Argus LLC has 1 employee, zero revenue, losses of 273 thousand rubles. But, apparently, Fedorov issued not all the companies personally to himself or to this offshore - how many more were tried to be "hidden" from the eyes?

At the same time, Fedorov is not an simple person - he was a Deputy in Yakutia, now he is the chairman of the Yakut regional branch of the All- Russian Non-governmental Organization of Small and medium Business  called Opora Russia and also heads the Diamond Union under the Sakha government. At the same time, the head of the republic, Aisen Nikolaev, personally "offerred" him for the last position. Does it mean that he has good connections with the regional authorities? More than 25 years to be engaged in Yakutia in such a profitable industry as precious stones. During his time as a deputy, he had an annual income of over 100 million rubles, but it was said that this was no more than 5-10% of his true income. And, it seems, there are guesses where the rest may be hiding - in his foreign offices?

And he has them, according to the Opencorporates database of foreign companies, two - there is also EPL SYSTEMS LTD. And there, in addition to him, Anna Evdokimova is listed as the director. She, in turn, is considered a person close to billionaire Roman Abramovich: for more than 10 years, she worked in various positions in the Millhouse venture fund owned by the oligarch.

Probably with her direct participation, as Forbes wrote, in September of this year, the 110 Industries company, which is engaged in producing video games, in August raised $20 million from the venture fund of Roman Abramovich and a number of other influential investors. Is it needed to be said that according to the  Companies House database, the company is officially registered in London, which means that money from there can legally "leak" abroad. And taking into account that a "man" of Abramovich "rules" finances in the company, may some of the funds appear in his pocket in the end?

Evdokimova is also listed as a director of SOREX GROUP, INC, which is probably related to the Russian Sorex LLC. The latter has representative offices in Moscow and Primorye, and is also fed by state contracts - it has them for 193 million rubles. It is curious, why a company engaged in electrical work should have a legal entity in Panama? And can it be related to Roman Abramovich? 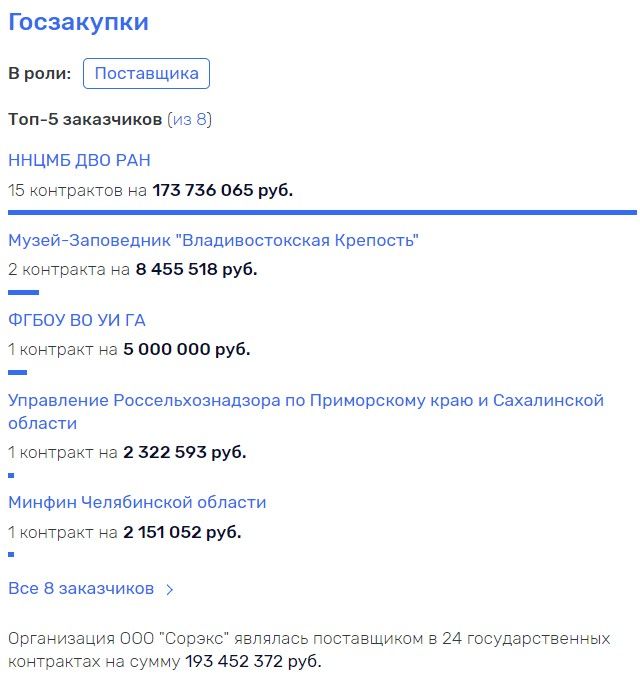 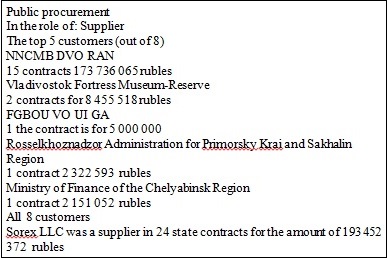 But that's not all. In addition to Sorex, other companies can use foreign firms to master the money received on state contracts. We are talking, in particular, about the entrepreneur from the Rostov region Olga Pshenichnaya - her namesake is associated with four Cypriot companies, according to the Opencorporates database of foreign companies. Is it needed to be said that the Cypriot M. KYPRIANOU FIDUCIARIES (CYPRUS) LTD also "shine" in these firms? 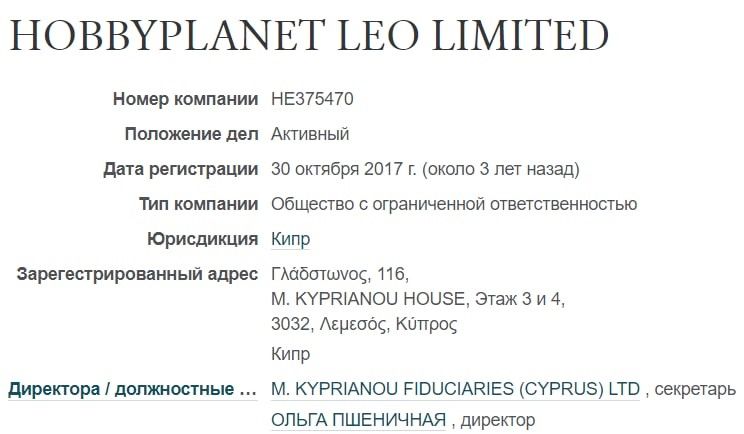 In Russia, Olga Pshenichnaya is listed as the founder of three companies, each of which receives solid contracts from government agencies. Thus, NPP Santas LLC contracts for 10 million rubles, in the top customers there are: Alrosa, Rosenergoatom Corporation, the structure of Russian Railways and Gazprom. Santas LLC has contracts for almost 300 million rubles, mainly with medical institutions in the south of Russia. Interestingly, no one is confused that such money goes to the office, where only two employees work, and the authorized capital is equal to a minimum of 10 thousand rubles? The third asset of Pshenichnaya is also doing well - contracts for 5.7 million rubles. And again - the minimum authorized capital, 1 employee. It's kind of suspicious, don't you think so? 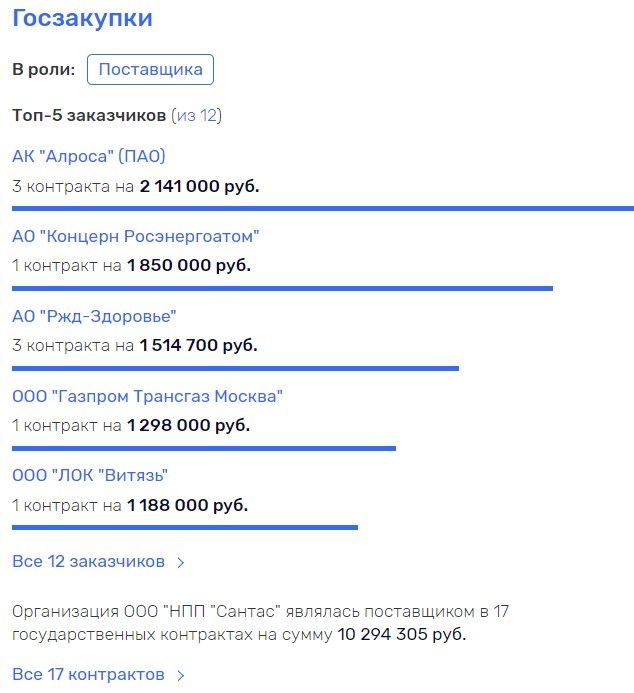 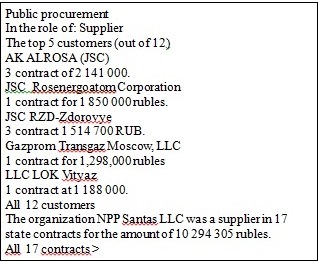 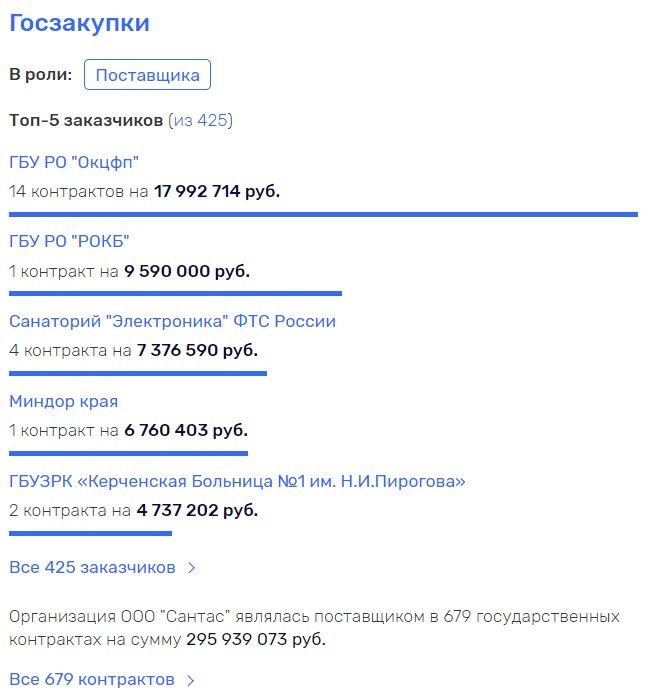 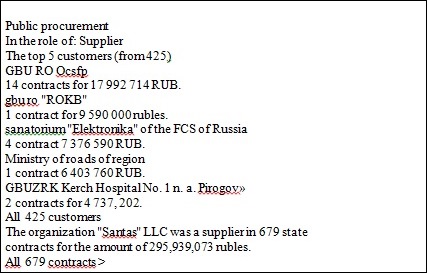 In the Cyprus company CRESTPARK INTERNATIONAL LIMITED, Olga Pshenichnaya is an official, and the director is a certain Yevgeny Maksheev. It is quite possible that this Russian businessman owned llc Avangard TB LLC, which was liquidated in 2018. Among his business partners in the Russian firm there is Bogdan Trempolsky, whose JSC Avangard Direct in 2019 received a contract for 683 thousand rubles from UAC-Zakupki LLC for the provision of freight forwarding services on the route Everett, USA - Krasnoznamensk.

And here the following nuance is interesting - the full namesake of Trempolsky previously worked as an ordinary physical education teacher in the not quite ordinary St. Petersburg gymnasium No. 610, the official website of the institution says. There are rumors that children of not ordinary people study at this gymnasium — of those who can be close to both big business and big politics. So that's how an ordinary PT teacher could go into business, and even get a contract from the structure of Rosneft?

There are vague doubts that with the help of Cypriot companies, businessmen from all over Russia can "launder" the money earned at home. And Rosneft did not pass by such a "trend"? Otherwise, how to explain the fact that the "threads" from the state corporation lead to very ambiguous firms and businessmen? There is the feeling that Investneftetrade of Sergey Nevsky was replaced by less "offshored" Marina Karmysheva.

16 May, 8:26
Sacrificing "Stockmann": an operation to save the "assets" of Gref and Hasis?
See also