A new era of bank fraud has come to Russia. In one of the first stories, the name Alfa Bank was "lit up."

The Moscow Post, getting acquainted with the cases in the Arbitration Court of the capital, stumbled upon the seemingly ordinary case "On collecting payment under the contract": one Russian company tried to "shake" several million "debts" from another Russian company. But in the course of this vaudeville, one significant detail turned out: a bank account with millions from the very beginning of the "" theatrical "action was brought into the process by a certain Mr. X.

Perhaps it was Mr. X who came up with a feint with a false passport, but on a certain face... Moreover, the businessman, general director of a large company, for which a settlement account was opened in Alfa-Bank JSC, did not suspect anything!

All this action passed, we note, not through the "Prison Bank," which comedians from the "Ural Dumplings" talk about so cheerfully in their mizansens. All operations went through the "cash desk" of the respectable Alfa Bank.

But how was that possible?

The correspondent of The Moscow Post understood this dark story.

The investigation is conducted by experts

The famous Dubinin and Partners law office in the capital is conducting this unusual case.

The editorial board of The Moscow Post contacted the manager - Oleg Evgenievich Dubinin. Mr. Dubinin confirmed that Dubinin & Partners represents the interests of AR Group.

- Yes, we represent the interests, but, according to the Confidentiality Agreement concluded with the client, Dubinin and Partners cannot comment on the progress of the case...

But Oleg Evgenievich advised to turn to the decision of the Arbitration Court, which is publicly available.

And from this decision it becomes clear how this dark story developed in detail.

And although there is a court decision, the story, according to Mr. Dubinin, will develop further, since - recall - Alfa-Bank is involved in this case.

In our conversation, Oleg Dubinin also noted that, having read the stories, Dubinin and Partners lawyers concluded that a new era of fraud had come. Attackers in increasingly sophisticated ways are trying to get money from bona fide companies, sometimes acting in collusion with banking structures, state authorities and fiscal authorities. 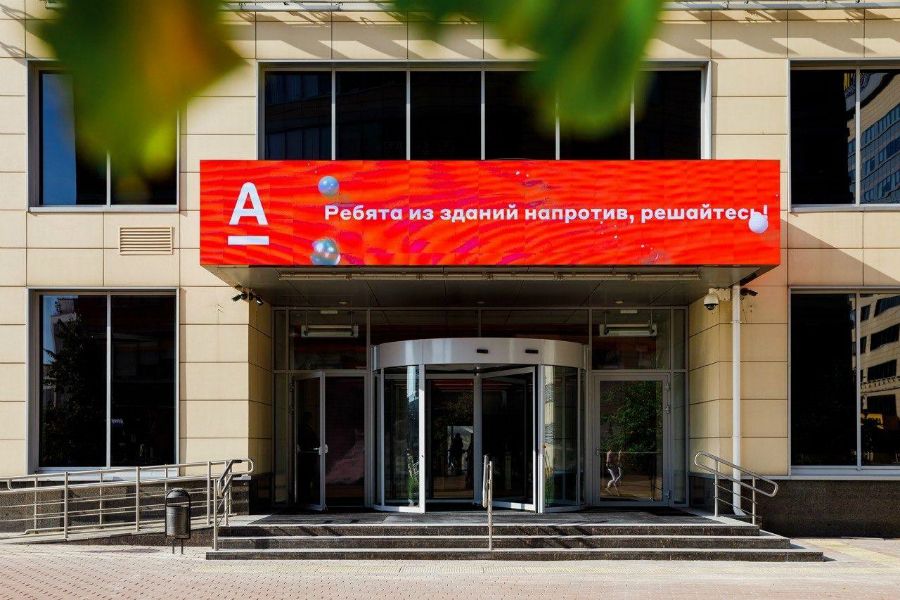 Naturally, Alpha Bank is already aware of this scandalous case...

But will all this banking history with several actors be adequately unwound?

The case was considered in Udmurtia

Dubinin & Partners lawyers represented the defendant. During its consideration, it was found that no contracts were concluded between the trustee and the plaintiff.

Moreover, when considering the situation in detail, it turned out that the money as a preliminary payment was transferred to the trustee in a settlement account to which he had nothing to do.

During the consideration of the case, it was established: an account with the trustee's company was opened by unknown persons (or a person) in Alfa-Bank JSC. 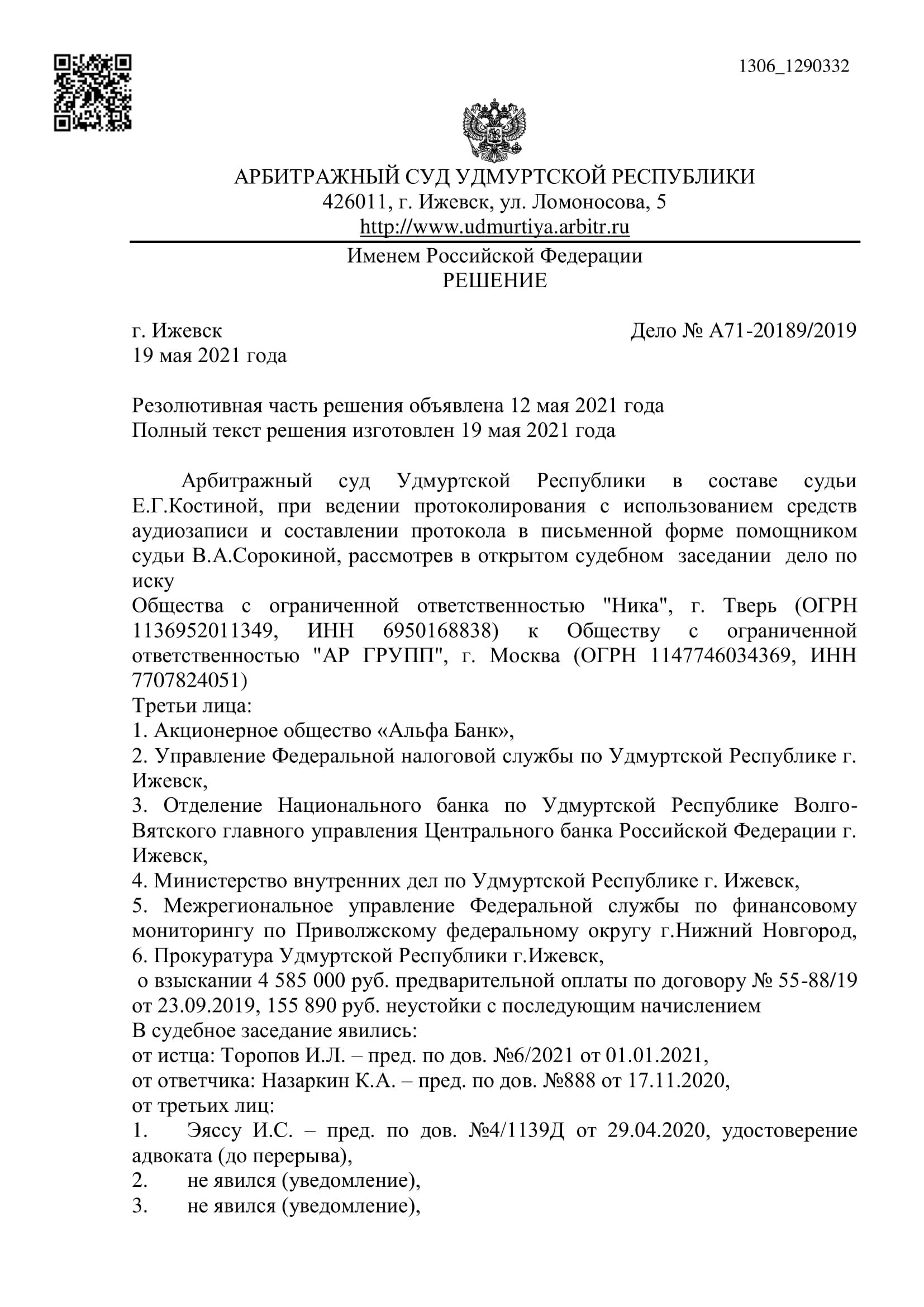 The Bank was involved in the case, in which an account was opened, the National Bank of Udmurtia, the Financial Monitoring Department of Udmurtia, and the prosecutor's office.

Further, a criminal case was initiated under Part 3 of Art. 327 of the Criminal Code, which is under investigation in the investigative department of the Tagansky OMVD: the client - the company "AR Group" represented by its general director M.V. Harin was recognized as a victim.

As a result, Nika's lawsuit was denied in full.

And the case materials were transferred to the prosecutor's office for the necessary measures.

Dubinin and Partners lawyers are preparing documents for a new "head" of this confrontation against the bank, which allows such egregious violations.

How was the case

But now in more detail, in all the details!

Note that this case has been going on since 2019. 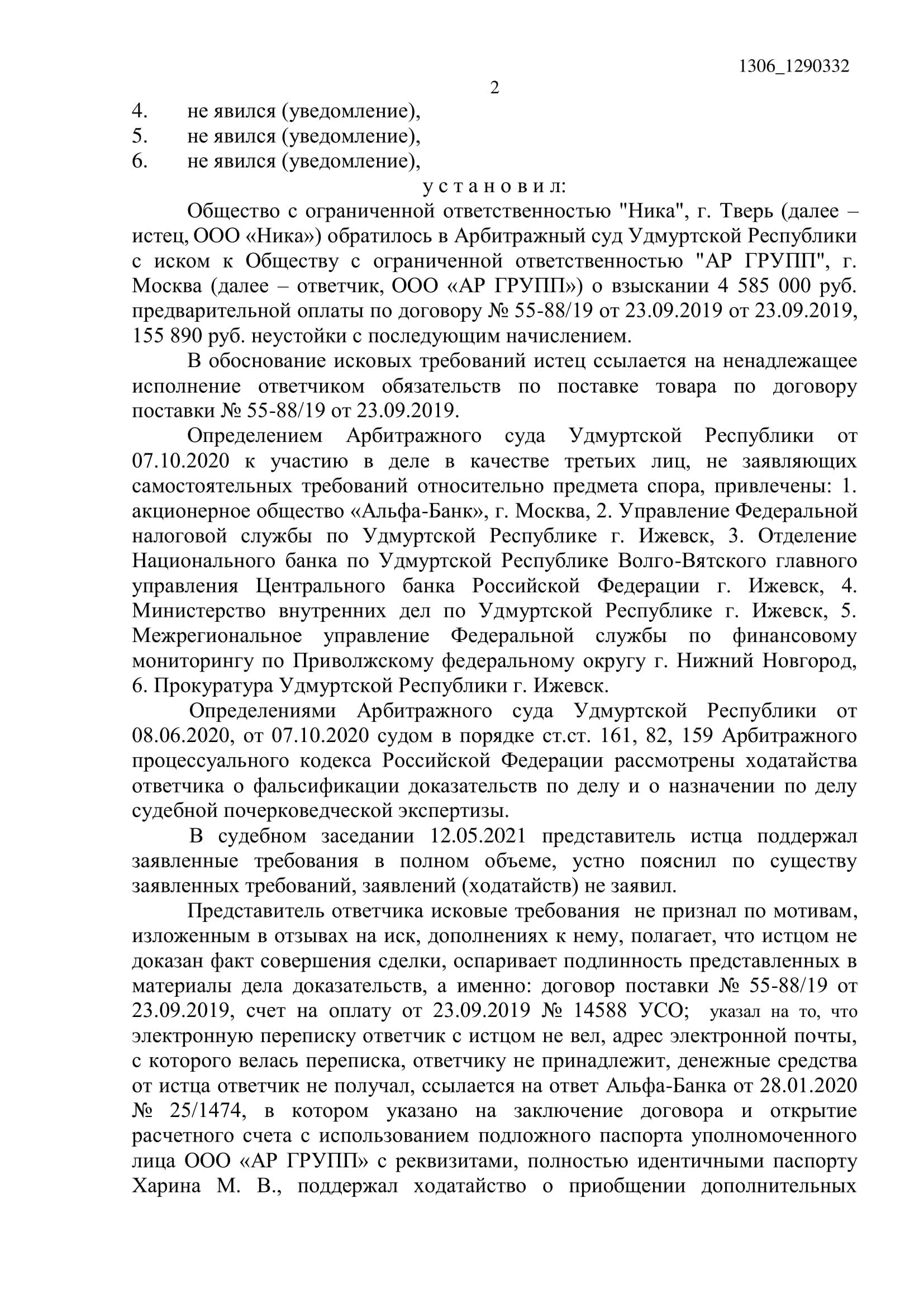 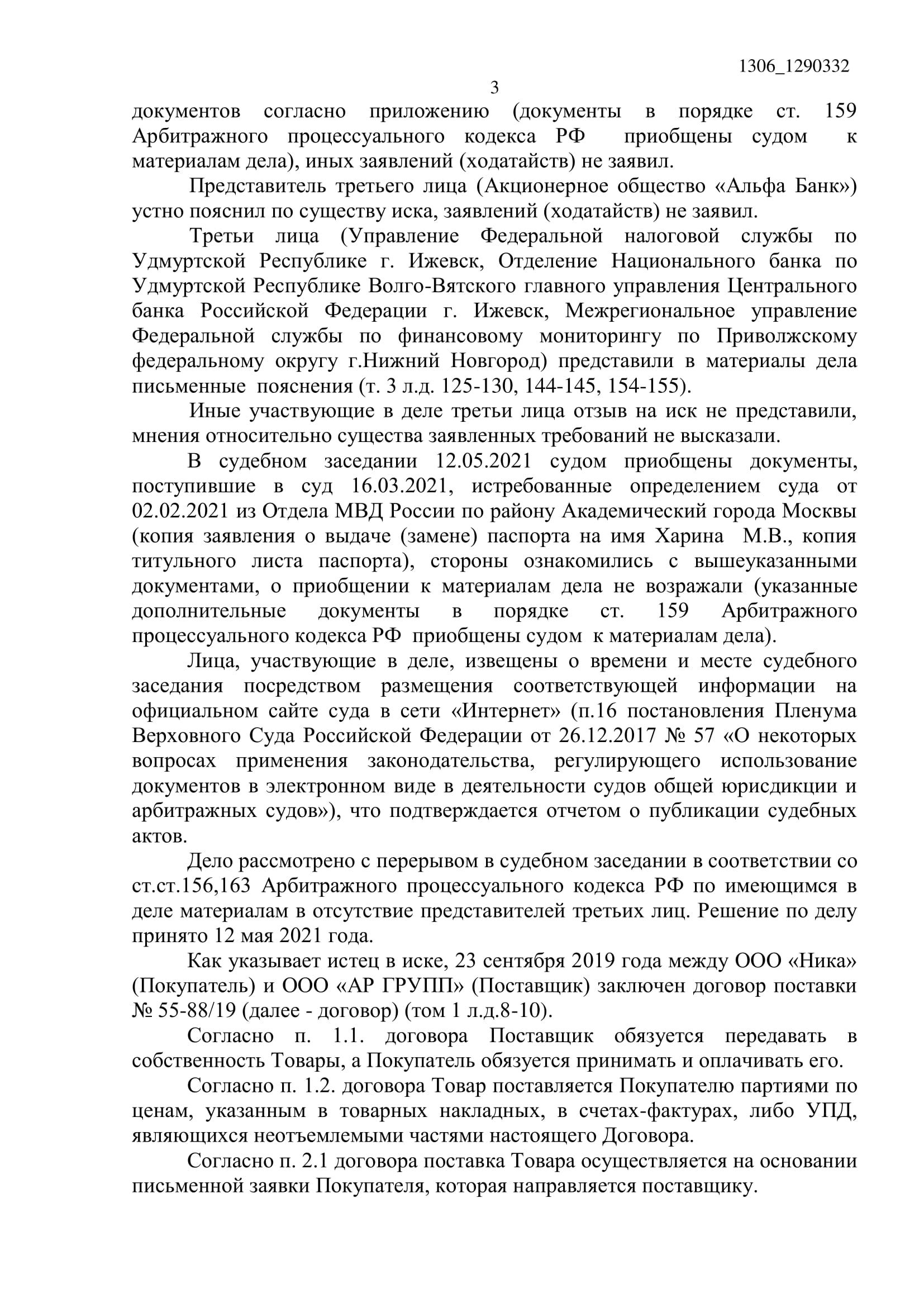 One of the paragraphs to the contract established the terms of payment: preliminary - 50%, the buyer had to pay the remaining amount of 50% within two bank days from the receipt of the goods.

But the original contract in the case file is missing... 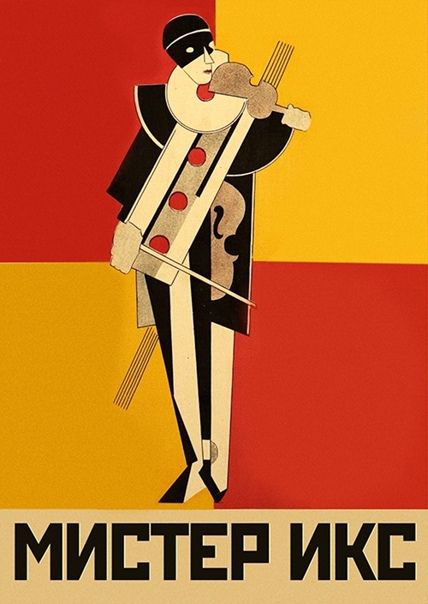 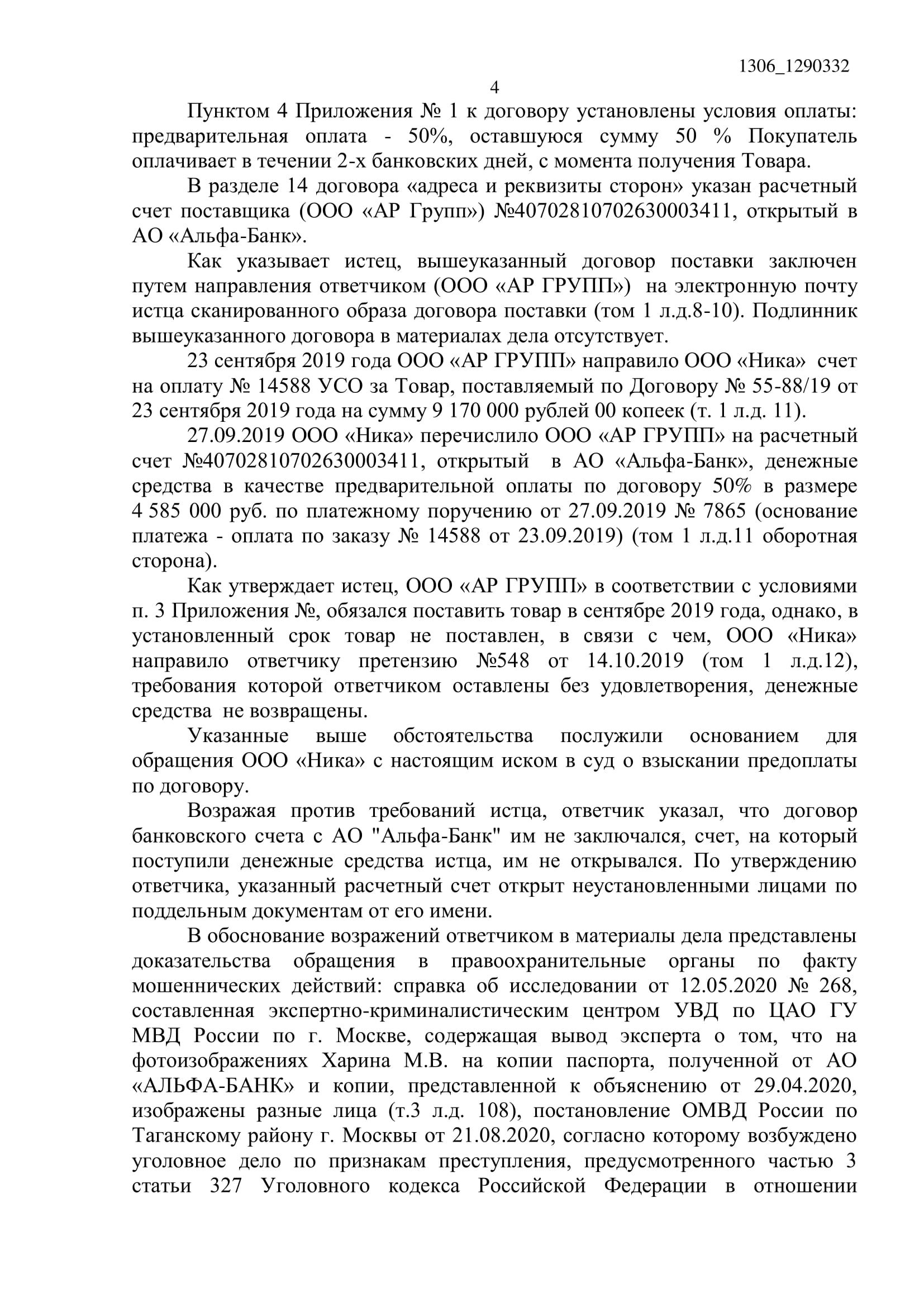 Further, already on September 23, AR Group LLC sent Nika LLC an invoice for payment for goods delivered under the contract in the amount of 9,170,000 rubles.

After 4 days, on September 27, Nika LLC transferred AR Group LLC to a settlement account opened with Alfa Bank as a preliminary payment under the contract of 50% in the amount of 4,585,000 rubles on payment instructions.

In addition, AR Group LLC undertook to deliver the goods in September 2019, but at the agreed time the goods were not delivered. And Nika LLC sent a claim to AR Group LLC on October 14, 2019. But the requirements were not satisfied, the money was not returned.

Then LLC Nika went to court.

Mikhail Kharin, head of AR Group LLC, once again explained that the company did not conclude a bank account agreement with Alfa-Bank JSC. 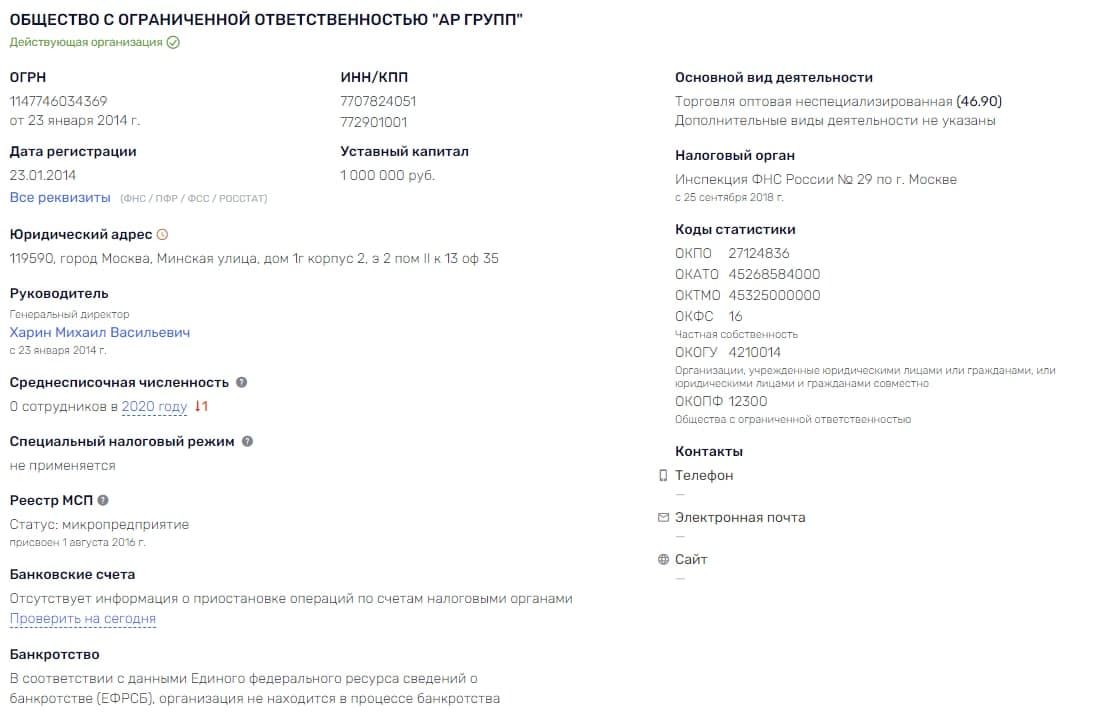 And the account to which the funds arrived, they did not open. Moreover, the said account was opened by unknown persons on fake documents on behalf of M.V. Harin.

It turns out that someone was thoroughly preparing for this operation?

And now the most interesting thing begins...

Soon after all these events, the general director of AR Group LLC Mikhail Harin was forced to contact law enforcement agencies on the fact of fraudulent actions. Then the forensic center of the Internal Affairs Directorate for the Central Administrative District of the Main Directorate of the Ministry of Internal Affairs for Moscow intervened.

There is a study certificate dated May 12, 2020 No. 268 (it is mentioned in the case). And the expert's conclusion that the photo images of M.V. Harin on the copy of the passport received from Alfa-Bank JSC and the copy submitted for explanation on April 29, 2020 depict different persons.

Then followed the decree of the Ministry of Internal Affairs "Tagansky" of 21. 08. 2020, according to which a criminal case was opened... against an unidentified person.

Decree of the Ministry of Internal Affairs "Tagansky" of 28.08. In 2020, AR Group LLC, represented by General Director Mikhail Vasilyevich Kharin, was recognized as a victim. 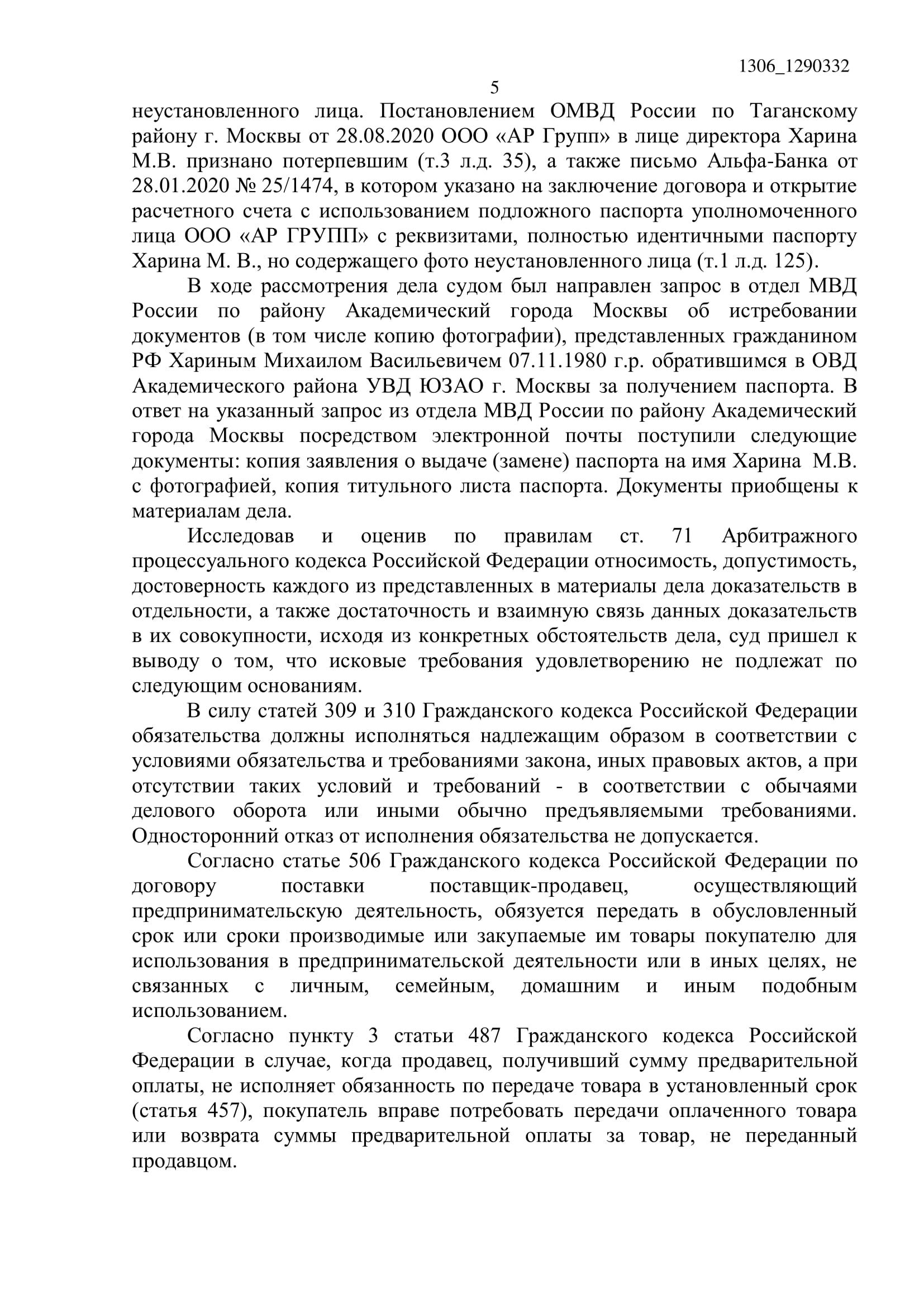 Further, the court found: the case file confirms the fact that the funds in the amount of 4,585,000 rubles. were transferred by the plaintiff to the settlement account No. 407... 11, opened at Alfa-Bank JSC.

And here the explanation of Alfa-Bank JSC is very interesting (is in the case file) that before the acceptance of AR Group LLC for servicing by the bank in accordance with the banking rules (instructions) for opening (closing) bank accounts to clients - legal entities, an AUDIT was carried out and the IDENTIFICATION of the client provided by law...

The bank did not have grounds for refusing the client to open an account, in connection with which on September 4, 2019, agreements were concluded between AR Group LLC and Alfa-Bank JSC on electronic document management under the Alfa-Ofis system and a cash settlement service agreement with Alfa-Bank JSC, settlement account No. 407 was opened... 11.

But the court also established the case materials that the signature contained in the confirmation of accession to the terms of electronic document management does NOT correspond to the signature of the general director of AR Group LLC M. Harin.

The seal print contained in the confirmation of accession to the terms of electronic document management DOES NOT CORRESPOND to the print print of LLC AR Group M.V. Harin.

All this has also been confirmed by a letter from Alfa Bank dated January 28, 2020, No. 25/1474 (available in the case file). This letter indicates the conclusion of an agreement and the opening of a settlement account USING A FORGED PASSPORT with details completely identical to the passport of M.V. Harin, but with a photo of an unidentified person... 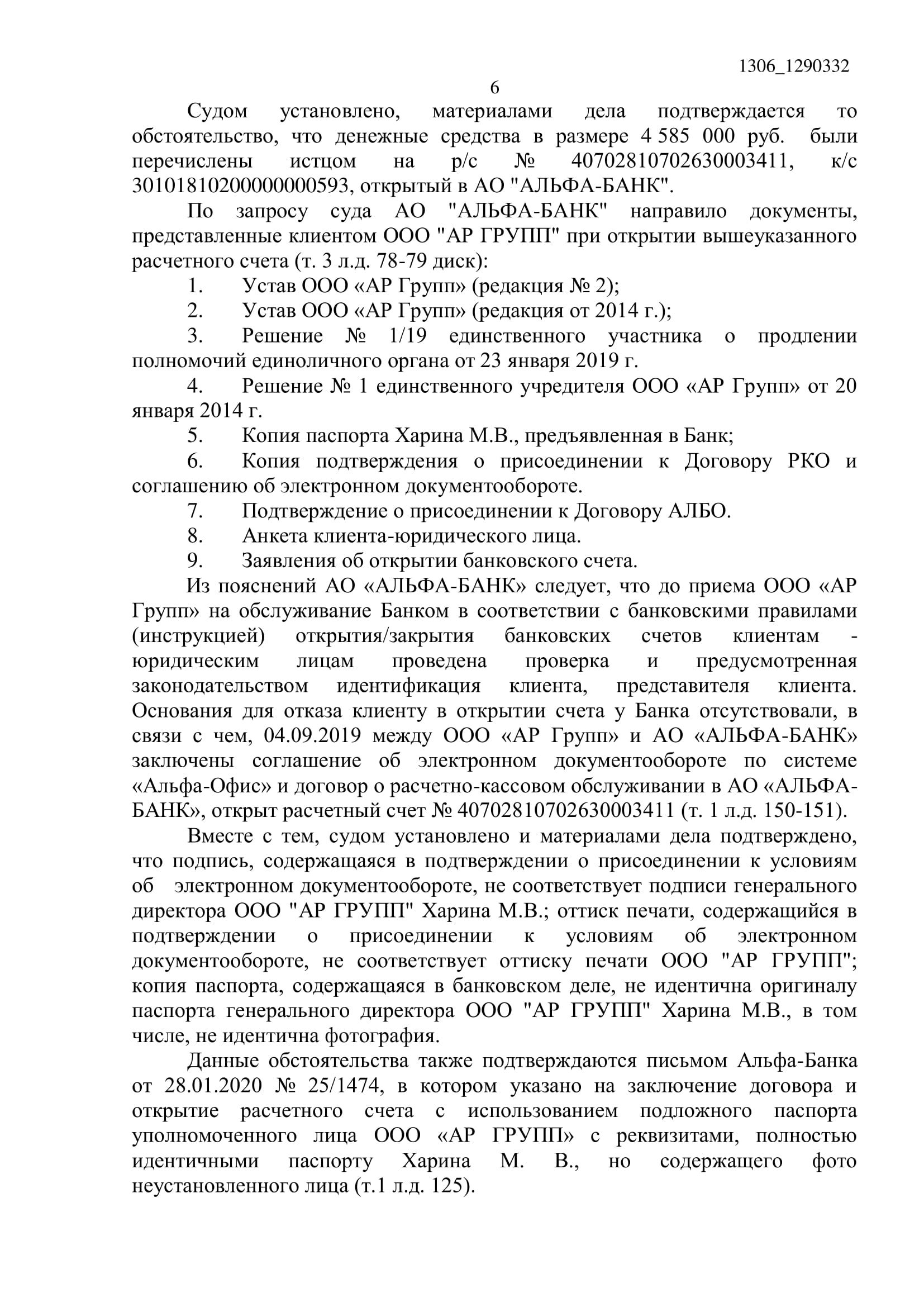 After all these "discoveries," the court concluded that an UNAUTHORIZED PERSON who did not have the right to act on behalf of AR Group LLC applied to open a settlement account to which the plaintiff transferred funds to Alfa-Bank JSC. 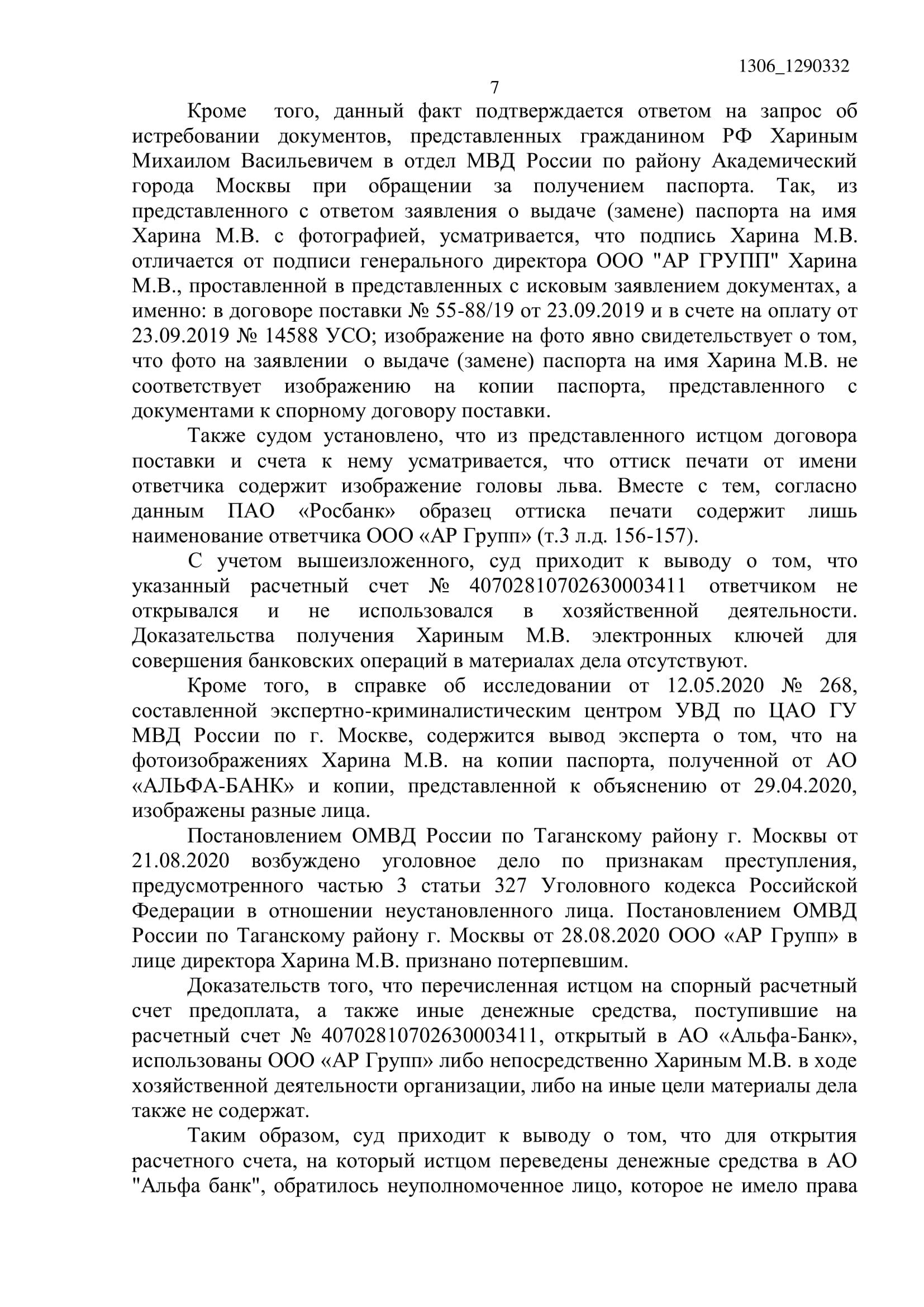 And this circumstance is confirmed by copies of forged documents submitted by Mr. X to Alfa-Bank JSC...

Therefore, the Arbitration Court of the Udmurt Republic decided to refuse to satisfy the claims. 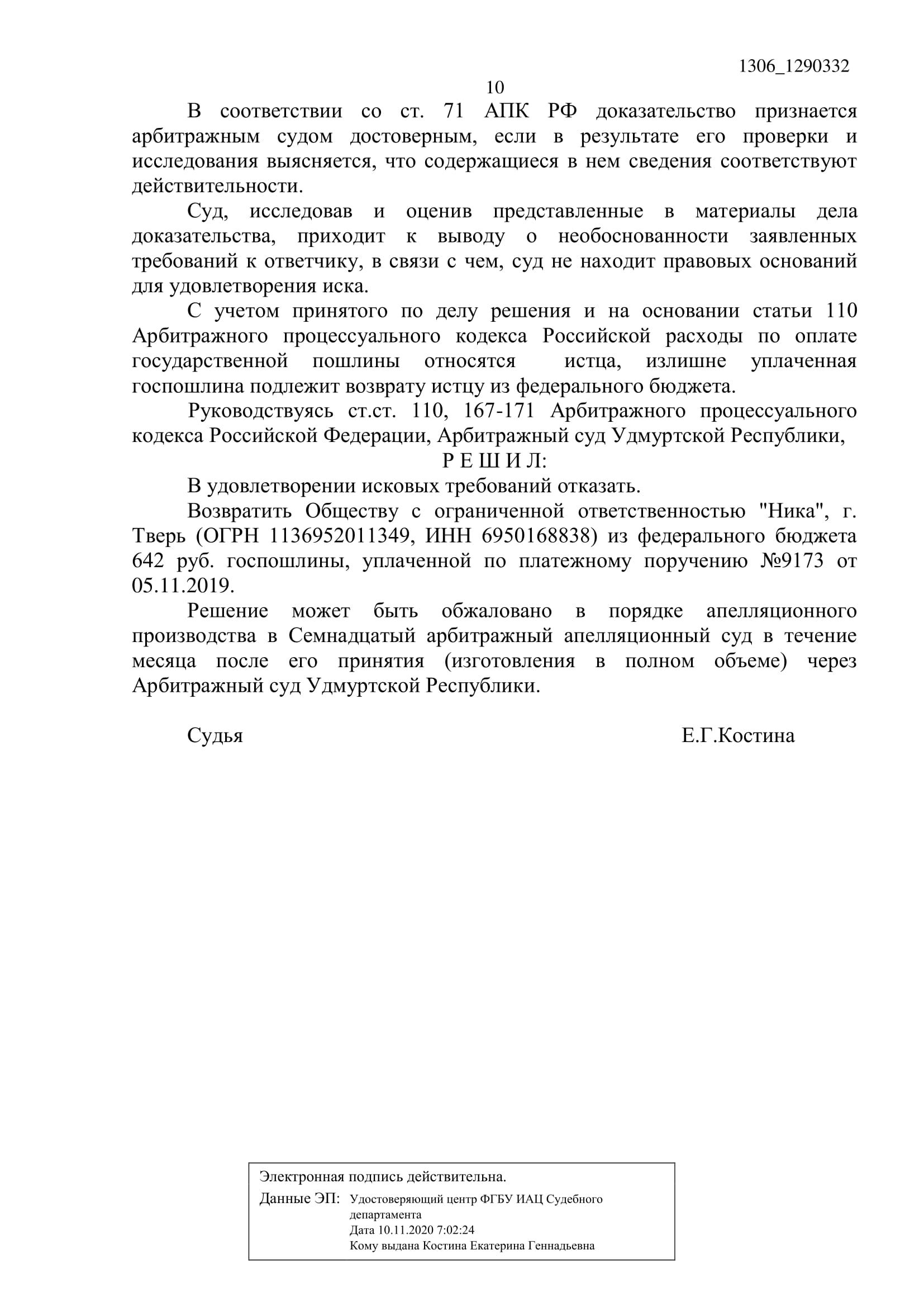 This is such an extraordinary story.

And here we must rely on the valiant work of the investigating authorities, which - I want to believe - will certainly calculate Mr. X (or Mr. X).

And the editors of The Moscow Post will talk about this in the next article.