Sacrificing "Stockmann": an operation to save the "assets" of Gref and Hasis?

Structures close to the acquaintances of Igor Sechin after the refusal of Sber German Gref to acquire his shares. It seems that the former deputy chairman of Sberbank Lev Khasis, who escaped from Russia, is now busy saving assets and has no time for Stockmann.

Sberbank's deal to buy Stockmann, a store selling clothing and household goods, was canceled. It planned to acquire the structure of German Gref with further integration into its marketplace. Despite the breakdown of the transaction, Stockmann's goods will still be presented in the "Sbermegamarket" - an online store created by the structures of "Sber."

According to RBC, the deal fell through due to the introduction of Western sanctions against Sberbank. However, in this case, the reason why the deal was broken only now remains incomprehensible. As the correspondent of The Moscow Post managed to find out, in fact, such an outcome may be associated with the flight abroad of the former first deputy chairman of Sberbank.

Lev Khasis himself previously oversaw the projects of marketplaces in Sberbank. As previously reported by The Moscow Post, it was he who was also behind the offshore INSTAMART HOLDING LTD, for which the Sberbank market was registered (at that time called Instamart).

In 2019, Hasis withdrew from Instamart's capital by selling his stake to the SBT Venture Fund II, one of whose investors is Sberbank itself. The company called such permutations "removing the risk of conflict of interested parties." Although in fact it turned out that Khasis sold the share to a division of Sberbank, which he also oversees. In short, they changed the awl for soap.

There is reason to believe that "Sbermegamarket" could be almost Hasis's personal business under the wing of the state bank, because, if you think about it, "Sber" actually hardly needed another marketplace under the side - at that time the bank was already "Sbermarket."

What is hidden behind the change in the structure of the founders?

It is worth making a remark. Now Sbermegamarket is nominally controlled by Marketplace LLC, which is 15% owned by M.Video and the founder of this company, Alexander Tynkovan. It is also known that M.Video is closely connected with the family of the scandalous businessman Mikhail Gutseriev, who recently came under sanctions - Interfax wrote about this.

It is interesting here that when the information was revealed, everyone was waiting for M.Video to be under sanctions pressure, but this did not happen. And here we return to the conversation about Hasis's flight to the United States and what he may have to do with this story.

Who owns the remaining 85% of the Marketplace - it seems like a secret covered in darkness. Most recently (until April 21, 2022), it belonged to Digital Assets LLC, the ultimate beneficiary of which was Sberbank.

But on the same April 21, the bank left the founders of the offices that controlled Marketplace. 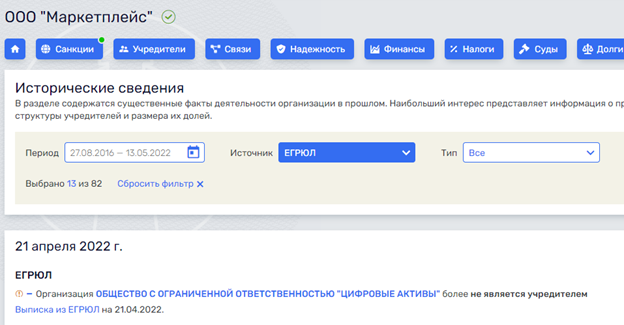 Who is the ultimate beneficiary?

And there is already room for thought. Either after Hasis fled from Russia, which, by the way, happened literally a few days before the above-described perturbations, the projects simply decided to close, because it is not possible for Hasis to remotely conduct them, and he did not dare to entrust someone.

Or there are nominal changes aimed at transferring the asset under the management of an offshore company associated with the former deputy chairman of Sberbank. In this case, it can be assumed that the lack of sanction pressure on M.Video is the merit of Hasis, who wants to maintain the asset of Marketplace. After all, he could also come under attack after M.Video. For the same reason, including Sberbank could come out of the asset.

And while changes are taking place, not before transactions with Stockmann. Moreover, experts note the problematic nature of the asset - in their opinion, it is necessary to invest in it and revise the idea of ​ ​ doing this business so that it brings profit. It is unlikely that Mr. Hasis is ready for this at the moment, who, of course, as they say, is a frequent guest in the United States, but still he did not live there.

It cannot be ruled out that he flew there, which is called "parking" also in order to protect the interests of German Gref in America, who is trying to "sit on two chairs" during the sanctions period. So not yet up to their projects.

As The Moscow Post previously found out, Khasis may be directly related to business in the United States - there are documents on the network that a certain Mikhail Kokorich asks for asylum in America. And the same gentleman (or his full namesake) owns a multi-billion dollar business in this country - the Momentum group. And in the co-founders he has none other than Olga Khasis-Finkelstein-Careless. Hasis's wife's name is Olga. Coincidence? We don't think... 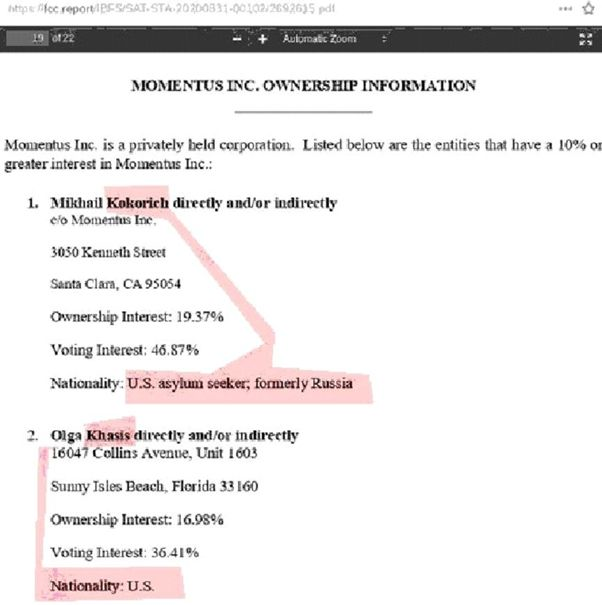 If Hasis is really engaged in business of this scale, this "Stockmann" is now an eyesore.

But that's not all. In 2021, scandalous former classified information from the so-called "Pandora Archive" scattered around the world. From the published documents, it became known that Gref had more than $50 million in family offshore companies in Singapore, Panama and Samoa, RBC wrote.

Let's not even try to answer the question of the origin of such wealth, we will only note that assets of this scale absolutely definitely need to be monitored.

Nevertheless, they take doubts that Gref and Hasis will refuse a deal that benefits them - under the conditions of sanctions, when Stockmann, a foreign company, can no longer conduct its business in Russia and is forced to sell it, the price of the asset can be much lower than at any other time.

So there is reason to believe that Hasis's affairs in the United States are not at all rosy, most likely he is concerned about preserving Gref's possible American assets, and he is not at all up to a new acquisition. But the former deputy chairman of Sberbank cannot be denied agility - after all, Sber managed to make some kind of agreement with Stockmann - at least the company's goods will be sold through Sberbank.

In this regard, Sberbank's exit from the Marketplace asset is rather nominal, perhaps we will soon see the Khasis offshore as part of the founders of the company.

In addition, options are possible when "Stockmann" will be given to someone from the powerful who will somehow pay for this opportunity to Mr. Gref. For example, it is known that the head of Rosneft Igor Sechin could well have expressed interest in the asset.

The fact is that his wife Marina Sechina was a shareholder of a company related to the business of the owner of Stockmann, Yakov Panchenko, Vedomosti wrote. They were going to implement a development project in the center of Moscow near the Tretyakov Gallery, but something went wrong.

In the same project, the development company "Regions" of the State Duma deputy Zelimkhan Mutsoev, the former head of the now bankrupt "Pharmingineering" Vladimir Mukhin, was involved.

Logically, selling an asset in Russia, Panchenko could turn to old acquaintances. And here the question is whether Sechin was not interested in Stockmann, or Gref simply offered initially more favorable conditions.

In total, Panchenko, who has already packed Stockmann's suitcases, who remained with almost nothing in the deal with Sber now, is probably extremely concerned about finding new buyers. And the asset, as a result, can be transferred to one of the above persons, and German Gref and his ward Lev Khasis, as a whole, settled well - having received at least part of Stockmann in the form of its products in their "Smermegamarket," we can say, "inflating" Mr. Panchenko, nothing much lost.