For what "failures" did the head of Rosseti Andrei Ryumin become an "Honorary Power Engineer"?

Behind the now Honorary Energy of the Russian Federation Andrei Ryumin are corruption scandals, failures at Lenenergo and the Caucasian regions abandoned to their fate?

According to the correspondent of The Moscow Post, Andrei Ryumin, Director General of Rosseti State Corporation, was awarded the title Honorary Energy Engineer of the Russian Federation. The award was personally presented by Minister of Energy Nikolai Shulginov, who had previously noted the "fruitful" work as the state corporation RusHydro, which was previously told in detail by The Moscow Post. Many greeted this award with smirks.

The fact is that both prominent officials are credited with many scandals, including corruption. Rosseti is now drowning in a heap of problems, the main of which are the crisis of non-payment and the extreme wear and tear of networks. Ryumin did not have time to solve this problem - as he did not manage in three years at the head of Lenenergo, the electric grid economy of the region was put in order. So why would he suddenly have the title of "honorary"?

From 2002 to 2018, Andrei Ryumin held senior positions in leading Russian energy, investment and industrial companies, in particular, he worked as an independent member of the board of directors of Mosenergo, general director of the United Energy Company, which is the second largest grid organization in the Moscow region, and other energy companies. And everywhere after himself left more questions than answers.

The loudest story of recent years, which is associated with his name, happened in St. Petersburg in 2018 during the leadership of Ryumin Lenenergo. Then the security forces opened a criminal case on embezzlement during the laying of two cable lines - from the Vasileostrovskaya substation to the Krestovskaya substation - during the construction of the Gazprom Arena stadium in preparation for the World Cup.

The scandal erupted so that the recently appointed Ryumin could fly out of office. They say that he enjoyed the patronage of the then head of Rosseti PJSC Pavel Livinsky, who then in 2021 allegedly and "pulled" him to his position after moving to the Government of the Russian Federation. Then there was no talk of this, but the trouble seemed to bypass Ryumin.

After all, it was not he who fell under the hot hand of the investigation, but his deputy at Lenenergo, Alexei Goryachev. Together with the latter, the deputy chief engineer of the Lenenergospetsremont company was also arrested. They were suspected of embezzlement of 131 million rubles when laying a cable, Kommersant writes.

The investigation believes that back in 2014, the general director of Meridian LLC Goryachev and the head of GlavEnergoMontage LLC ensured the production of fictitious design documentation on behalf of EdvansStroy LLC for laying the cable line. The important point is that, according to the same investigation, unidentified persons from among the leaders and employees of PJSC Lenenergo provided them with support in the production of documentation.

Who could help them with possible crimes remained a mystery. As well as the way Mr. Goryachev already under Ryumin turned out to be the deputy general director of Lenenergo. Presumably, also for some outstanding services?

Under Ryumin, other scandals rattled, which, however, he was always not opposed to writing off to his predecessors. For example, before the case with the cable to Gazprom Arena, the court found that when laying an underwater power cable that was supposed to connect Petersburg and Kronstadt, almost 389 million rubles were stolen. The maximum cost of work was estimated at 660 million rubles, that is, more than half were stolen. About the situation writes Fontanka.

With the arrival of Ryumin, there was no more order in Lenenergo. Last summer, when Ryumin had already managed to get used to the chair of the head of Lenenergo, the FAS Directorate for the Leningrad Region opened a case against PJSC and the Committee on Tariffs and Price Policy of the Leningrad Region. Antimonopolists believed that the actions of officials jeopardize the existence of LOESK JSC in the electricity market. About this writes Regnum.

After that, there were rumors on the market that under the leadership of Ryumin they simply tried to "squeeze out" a competitor. If so, then Ryumin should be familiar, because he came from a commercial environment. Moreover, already being in the rank of top manager of the Russian state corporation, he is not shy about owning a business. And no conflict of interest?

Now he is listed as the founder of 11 organizations at once. Shares, of course, are not in trust - apparently, after Rosseti, Ryumin has time to personally direct his own business. Some companies may have fictitious signs. For example, LLC Savkom, where Ryumin has 70% of the shares, did not have any own assets, and with an authorized capital of 10 thousand rubles, one person works there. 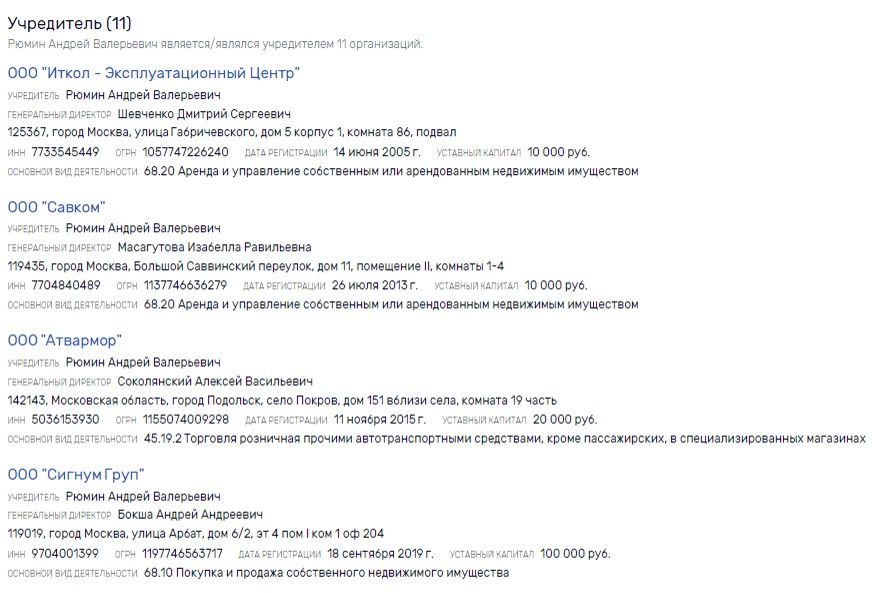 The work in the state corporation is not a hindrance to its own business?

Among the past assets of Ryumin, Stroydorallans is also listed. One of the founders of the latter is Elena Nikolaevna Bilokon, daughter of the former Ukrainian Minister of the Interior, Business Petersburg writes about this. In addition, it is known that Ryumin is the father-in-law of the famous Ukrainian politician and oligarch Viktor Medvedchuk.

Evil languages ​ ​ have long been called Medvedchuk almost the patron saint of Ryumin, and Ryumin himself - with the hands of Medvedchuk in Russia.

But this is all in particular. If Ryumin had everything excellent at Lenenergo, no one would remember this. But instead of development, together with the authorities of the region, he fiercely sued them. As a result of "common efforts," the Leningrad Region was unable to fulfill the order of the President of the Russian Federation of June 23, 2015 and liquidate debts to Lenenergo to smooth tariffs.

Moreover, Lenenergo also began to "drown" the region - the Arbitration Court filed a lawsuit to recover 17.4 billion rubles from the regional budget. About this writes Kommersant. That is, it was not enough for Ryumin to pursue a competent tariff policy, but he was ready to collect debts despite the promises of the authorities to rectify the situation?

The topic of debts is a special topic, both for Ryumin and for his predecessor and, as is believed, the patron of Pavel Livinsky. The latter also left behind a lot of debts, some subsidiaries of Rosseti in the regions are working in a serious minus. The biggest problem with PJSC Rosseti North Caucasus.

In 2019 alone, with a revenue of 18 billion rubles, its losses amounted to 9.8 billion. At the same time, the volume of state contracts of the company exceeds 4.4 billion. The situation in the "subsidiaries" looks the same: losses of Dagestan Network Company JSC amount to 6.9 billion rubles, Dagenergoset JSC - 174 million.

How did Andrei Ryumin decide to solve this hereditary problem? Very simple - in no way. Worse, at the end of April 2021, a scheme was broken to restructure the debts of energy retail companies of the North Caucasus owned by Rosseti to the wholesale energy market. About this wrote Kommersant.

The state holding admitted that it no longer has the funds to ensure full payment of energy by its structures in the North Caucasus Federal District - by the end of the year, as much as 7.4 billion rubles are not enough. And this was supposed to be the decision of Mr. Ryumin.

We are talking about the debts of Kabbalkenergo, Karachay-Cherkesskenergo, Kalmenergosbyt, Sevkavkazenergo, Ingushenergo, Dagenergosbyt, Nurenergo and Chechenenergo, which are part of the Rosseti North Caucasus At the same time, money from these structures could be banally withdrawn: as TASS wrote, in March the Ministry of Internal Affairs detained 11 former heads of regional energy companies suspected of embezzlement of more than 10 billion rubles.

There is a problem, and it did not appear at all under Ryumin. However, few people assumed that he would not just not decide it, but would also dismiss it, as if from an annoying fly that could interfere with his career prospects. How the Caucasian units of Rosseti will now function, on the work of which millions of people depend is an open question. 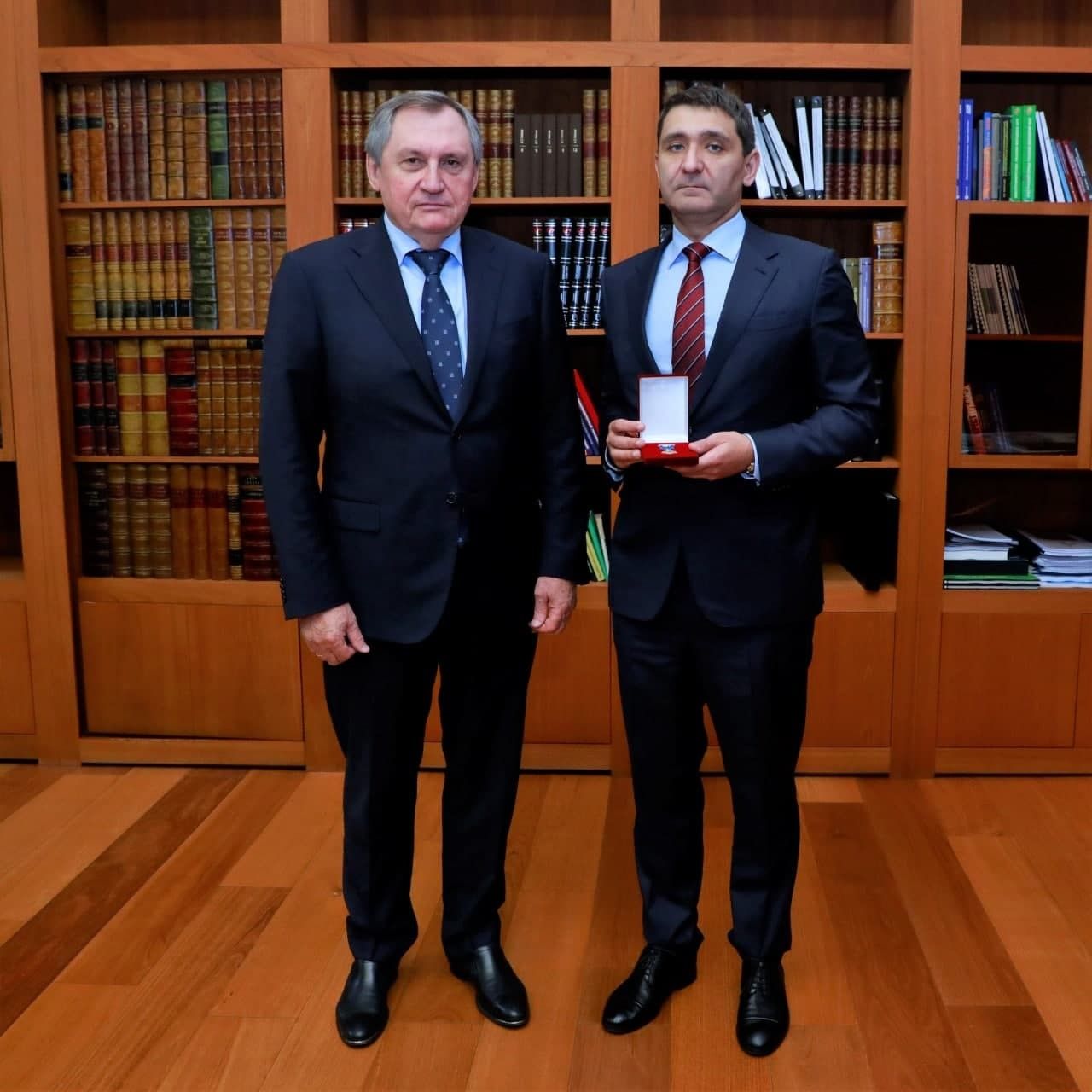 But for the head of the Ministry of Energy Nikolai Shulginov, who presented the Medal of Honorary Energy of the Russian Federation to Ryumin, the question is apparently not worth it. I deserve it, I deserve it.