It seems that one of the beneficiaries of the JSC Biotechnologies company, Alexander Ryazanov, may be behind the attempted bankruptcy. Is its reason the desire to push partners out from this structure in order to manage it alone?

As the correspondent of The Moscow Post reports, a serious corporate conflict broke out between the shareholders of JSC Biotechnologies. The company is trying to go bankrupt by its subsidiary RHC Agroservice LLC. The reason was the debt of this enterprise for the supply of grain to the third structure.

Since the parent company is responsible for the  debts of its subsidiary, the bankruptcy claim was sent to Biotechnologies. One of the beneficiaries of JSC Biotechnologies itself, former Chairman of the Gazprom management Board Alexander Ryazanov, may be behind this step. And the reason may be banal - to withdraw other shareholders from the founders.

Biotechnologies is currently implementing a major project to build a grain processing plant in the Tambov region. Obtaining sole control of the company will allow Riazanov to get all possible benefits from this undertaking.

The company works in the field of grain processing and is equally owned by JSC RHC, the founder of which is Alexander Ryazanov, and the Cyprus company Fabelston Finance Limited, which can hide entrepreneurs from China.

Alexander Manko, co-Director of Biotechnologies, names the reason for the court proceedings: a difference in the views of shareholders regarding the company's future development plans. Allegedly, representatives of Fabelston Finance Limited are surprised by the constant unprofitability of the project. According to him, they conducted an audit and revealed unfair management by the former Director of the company, and as a result  even a case about a shortage of 3 thousand tons of grain products was initiated. Manko's words are quoted by Kommersant.

The former Director of the company is Vasily Gnedov, who retired in 2019. He may act in the interests of former Gazprom top Manager Alexander Ryazanov. Their connection is easy to trace. Previously, Ryazanov was the founder of LLC ZLK, but in the same April 2019, when Gnedov ceased to be the Director of Biotechnologies, he left the founders.

Vasily Gnedov was also the founder there, and after Ryazanov's departure, he increased his share in the authorized capital. That is, it seems that Ryazanov gave or sold him his share - it is unlikely that he would do this in relation to a stranger.

Possible motives are easy to understand. Money continues to be invested in Biotechnologies. The company's projects were stimulated by the Government of the Russian Federation through business support programs, the structure received state subsidies and generous loans from Rosselkhozbank. The authorized capital of the structure is a billion rubles, which means a lot.

What, may a possible "multi-step" withdrawal from the structure of the founders of Fabelston Finance Limited as a result of the bankruptcy process look like, in this case? As already mentioned, the story began with a bankruptcy claim against the subsidiary of Biotechnologies, RHC Agroservice LLC. It's all about the company's relationship with contractors.

According to the authors of the white_news information channel on the Yandex.Zen service, allegedly in the past, RHC Agroservice LLC in the interests of JSC Biotechnologies concluded a purchase and sale agreement with Medeu LLC for the purchase of agricultural products (grain) for 17.6 million rubles. Under the same agreement, the subsidiary has agreed to pay Medeu all the money within three days. In other words, the company was supposed to have money.

However, instead, it allegedly made only a partial payment of 10 million rubles, "keeping" the remaining 7 million. After that, Medeu started promising and trying to get a postponement. As a result, the amount of debt could only increase, and the result was simple - Medeu LLC appealed to the court for debt collection. Since RHC Agroservice, allegedly, had no money, Biotechnology got a bankruptcy claim, didn’t it?

Thus, it is easy to assume that the whole situation could have been inspired by Alexander Ryazanov, in whose interests Vasily Gnedykh probably acted. He could easily have set up a failure on payments for grain for Medeu LLC, just to provoke bankruptcy proceedings already in relation to the parent structure.

How can Ryazanov get Biotechnologies if the company is declared bankrupt, by removing other shareholders? It is simple: according to rumours, the structure owes him personally about 104 million rubles. Being the first in the list of creditors, he could "push aside" partners, remaining the sole owner of the company and conducting a financial recovery procedure. But does this not look like ordinary fraud?

Managed to be everywhere?

Biotechnologies would be very useful to Mr. Ryazanov as the sole owner. Now, the former Gazprom owner staged an "expansion" in various markets, including road construction. His companies are buying land in six regions of Russia for the construction of the country's first private highway named Meridian between Kazakhstan and Belarus. The project is estimated at 500 billion rubles, and should become part of the high-speed road between Shanghai and Hamburg, Germany.

As Forbes wrote, Mr. Ryazanov has already bought 11,000 hectares of land for this private highway. Who can believe that he would not have found a pathetic 7 million rubles to help the subsidiary of his Biotechnologies get rid of debt?

Mr. Ryazanov himself is not far from officials, public administration and politics. In 1999-2001, he was a Deputy of the State Duma, and after that he managed to make a lot of marks. He worked at Gazprom from 2001 to 2006 and owned a stake in the company. He sold it in 2007, after which he headed a variety of large state corporations. In 2007, Ryazanov was Chairman of the Board of Directors of Russian Holding Company, and in 2008, a member of the Board of Directors of Russian Railways.

It is said that the state's support for the Biotechnologies company was based on its lobbying capabilities. Now, apparently, banal greed played a role. In addition, detractors attribute one feature to Ryazanov: allegedly, he is so proud of his career and connections at the top that he looks at the law through his fingers, and it began a long time ago.

Riazanov has been involved in scandals in the past. One of them, when he was Deputy Chairman of Gazprom, almost became an international one. In 2003, Mr. Ryazanov, as a top Manager of a Russian state corporation, visited Turkmenistan, where he generously presented Turkmenbashi Saparmurat Niyazov with a rare book from 1651 in Persian.

Turkmenbashi was very happy with the gift, but here's the problem: such books are a cultural value, their import and export from the country are strictly regulated. The noise was raised by employees of the Ministry of Culture of the Russian Federation. According to Tatyana Petrova, then Head of the Department of Expertise and Control over the Export and Import of Cultural Property of the Ministry of Culture, Mr. Ryazanov could not legally take this book away from the country. Her words are quoted by Novye Izvestiya.

To take the book back from Turkmenbashi is to spoil relations between the two countries. And accept a possible violation of the law? As a result, Ryazanov did not bear any responsibility for this. It seems that such a high-ranking boss can do anything. Including to make a "multi-step" moves to "spin" a share from their own business partners?

In the conditions of the most severe economic crisis in the country, he even went into mining cryptocurrencies - the most opaque sphere that you can think of. In 2018, his Russian Holding Company (RHC) acquired a 50% stake in Data Processing Centre LLC, also known as New Mining Company, which supplies mining equipment.

Now, both of these companies have signs of fictitiousness and resemble companies for withdrawing money. At the end of 2019, Data Processing Centre LLC went into minus by 11 million rubles with revenue of 1.3 million rubles. The company's asset value is zero. It has only five employees with an authorized capital of 10 thousand rubles.

The Russian Holding Company is no less suspicious. Think about it: with an authorized capital of 647 million(!) rubles, only one employee works there. At the end of 2019, the company had no revenue of a ruble, the loss was 2.1 million rubles. But the book value of assets - as much as 3.4 billion rubles, and it has grown over the year. 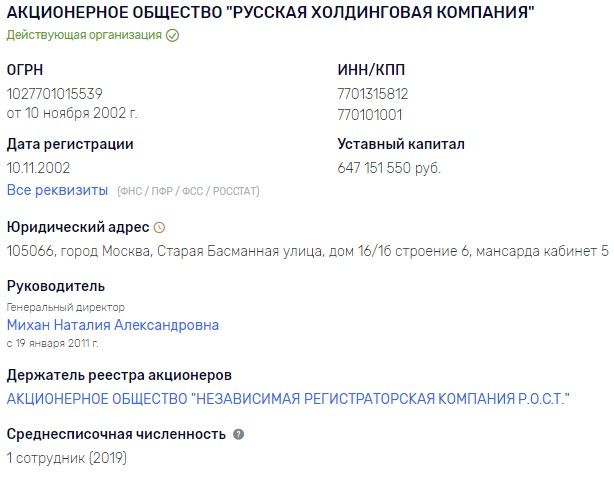 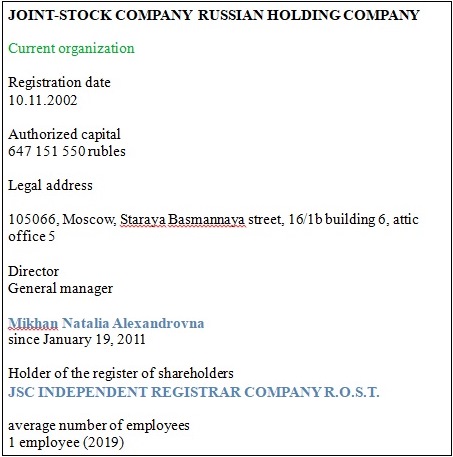 The ownership structure of RHC is not transparent. Ryazanov has a stake there, but it seems that the rest may belong to offshore companies. Can money be banally withdrawn from Russia through the RHC? And what if unprofitable Biotechnologies are not really unprofitable at all, they just "take away" the entire margin into the "transit" structure of Ryazanov?

As previously written by the journalists of Lenta.ru, Ryazanov was dismissed from Gazprom due to excessive independence. It is likely that he "played his games" there. A big ship needs a big sea, but why should his partners suffer from it?

08 September, 8:16
How Safin and Miller play the pipes
See also