Road to the house: the head of Rostec bankrupted the institute to vacate a beautiful building?

JSC "Central Research Institute of Economics, Informatics and Management Systems" (CNI EISU) declared bankrupt. The total debt of the enterprise is 3.57 billion rubles. There are versions of who can benefit from all this.

According to the correspondent of The Moscow Post, the Central Research Institute of EISU is a subsidiary of Rostec State Corporation. Its interim leader for several years has been a certain Katrin Dobrova, who back in May 2019, employees of the research institute were accused of negligence and non-payment of wages. They even appealed to President Vladimir Putin with an official letter of appeal for help.

Katrin Dobrova also distinguished herself by "splagiating" a dissertation, which the Ministry of Education and Science in 2016 invalidated, depriving her of the title of Doctor of Sciences.

Ms. Dobrova's track record includes working as head coach at the Russian Academy of Missile and Artillery Sciences, leading organizations such as JSC Technodinamika and the Planning and Budgeting Department of JSC United Instrument-Making Corporation (by the way, Rostec division).

Only now, despite the appeals of employees of the Central Research Institute, Dobrov and now there - as director of an organization breathing incense. 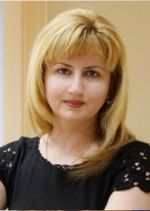 Very strange things around the mansion for 7 billion

But if Putin as a whole is not so important as it will be with the Central Research Institute, then it is not very clear: why its direct founder Rostec, represented by General Director Sergei Chemezov, sat folded pens all the time while clouds over the Central Research Institute thickened. Is it just that someone's special interests are involved in the case, since Dobrova in Rostec has long been tired of moving up the career ladder?

So, an elite mansion in the center of Moscow claims to be one of these "special interests," which until recently belonged to the Central Research Institute and was arrested, like all its property after the institution was declared bankrupt.

The mansion is located at the intersection of Malaya Bronnaya Street and Tauride Boulevard. It is included in the register of objects classified as monuments of cultural heritage under the name "Golitsyn City Estate - profitable possessions of M. S. Romanov and the Society for benefits to needy students of Moscow Imperial University." The total area of ​ ​ the building is 7.09 thousand square meters. m, its cost experts determine at 7 billion rubles.

It was bought back or privatized - not clear. Rather, the second, since there is no publicly available information about the bidding for this mansion. According to Rosreestr, the building is privately owned. The publication CNews, citing its source, claims that the house is entirely owned by the Central Research Institute, however, the building has repeatedly been rebuilt. At the same time, the institute does not dare to earn money on the house, renting premises there - there is even a corresponding section on the site "Rent," where the Central Research Institute offers organizations to use premises for free as part of an object of cultural heritage measuring from 300 square meters.

According to the common practice of dealing with bankrupt property, this seized expensive asset can go into the possession of the company in respect of which the Central Research Institute is most burdened with debt obligations. And he should most of all, oddly enough, the maternal structure - that is, Rostec. As they say, "Mom is not a bank, does not take interest." However, in this situation, "mother" takes real estate.

Evil languages ​ ​ claim that Mrs. Dobrova was put to run the Central Research Institute precisely with the aim of its complete and final collapse, so that the company's assets passed into the right hands. We do not intend to argue that this opinion is fair. Nevertheless, all the above, coupled with the fact that Dobrov was not arrested, not exposed and, it seems, are not going to be brought to trial, despite the gigantic heap of cases instituted against the Central Research Institute (including with the filing of Rostec), only confirms such guesses.

How could the mansion so attract the attention of Mr. Chemezov?

There is usually a lot of fuss with historical buildings: their status imposes a ban on a huge number of actions in relation to such houses. The most obvious and interfering businessmen who are attracted to such mansions is the need to maintain its historical appearance.

As a rule, the ban on any changes is embarrassing - each new threshold must be agreed with the relevant state body: in Moscow it is the Department of Cultural Heritage. Moreover, I bought the monument, so be kind and immediately take care of its restoration, and otherwise fines, courts and privatization of property by the city will go.

And now we look at the "Golitsyn City Estate." 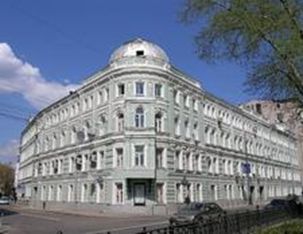 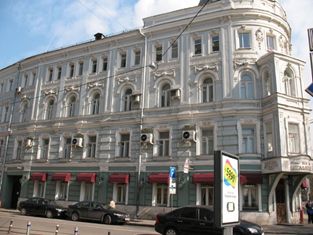 The house is in perfect condition and, if you expand the list in the "Rent" section of the Central Research Institute, it can bring colossal money. Moreover, we found an apartment for sale in a house of 12 square meters. m. and worth 100 million rubles. By the way, put up for sale only a month ago, sold through a real estate agency. 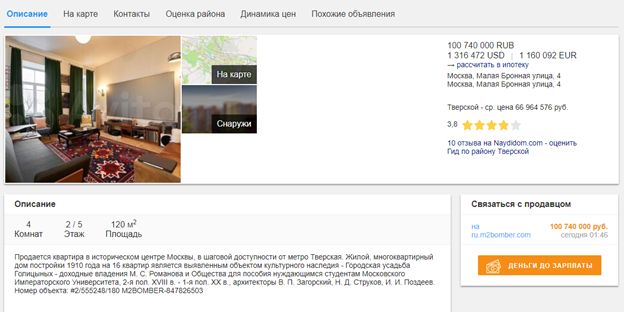 Previously, Rostec was forced to spend certain funds on the maintenance of the research center, although most of this amount was spent on not completely transparent needs. Now that the premises previously occupied by employees of the institute are vacated, billions can be earned! And in the future, resell the house to some "necessary" entrepreneur, for example, for the creation of another apartment hotel. Perfect plan!

Maybe the head of Rostec fears a repeat of the situation and therefore drew attention to the former building of the Central Research Institute, which has already been built and is guaranteed to avoid the problems that were in Zhukovka.

A third option is also possible - the house will be transferred for money, services or free to any of Chemezov's friends. A suitable candidate - Vitaly Mashchitsky, who grew up with the general director of Rostec, conducts a joint business with him (including being the director of Rostec's subsidiary, which sells and leases non-core real estate of a group of companies, RT - construction technologies). Maschitsky, in his own words, has been friends with Chemezov all his life. Maschitsky is very attracted to real estate projects.

Selling assets, he always kept real estate. According to various sources, his VI Holding manages more than 100,000 square meters. m of office and commercial real estate in Russia and abroad. The most promising real estate transactions at Mashchitsky were planned in the very center of Moscow, among them three mansions - on Dolgorukovskaya Street, in the Last and Volkov lanes. So it is likely that the vector of his interests is now aimed precisely at the former property of the Central Research Institute. 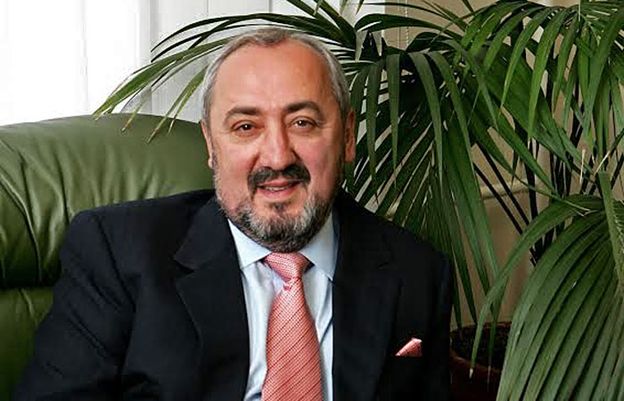 By the way, Chemezov promised to save and redistribute the employees of the bankrupt Central Research Institute, but he also promised to keep it earlier. So no one can yet say with complete confidence whether there is a stable future for scientists or whether they are threatened with dismissal and the search for a new job.