Can a trendy startup in the field of cancer diagnostics under the control of Alexey Remez  appear to be a "shell" pumped up with budget money?

As the correspondent of The Moscow Post reports, the Central clinical hospital of the railway monopoly RZD-Medicine has implemented the software of the young Russian startup UNIM. More specifically, a digital platform for cancer diagnostics based on histological tissue sections, which the company has been developing since 2014. The contract price is $100 thousand.

It is not clear why the amount is in dollars. Perhaps the mastermind, CEO and owner (36.8%) of UNIM Alexey Remez dreams of moving to the dollar zone, but in the meantime he could decide to cash in a little on the Russian budget. The fact is that he received money for his startup from the state Internet Initiatives Development Fund (IIDF, 1.5 million rubles), and later got hold of "cool" investors like the former Vice-President of Rostelecom Alexey Basov.

But more on that later. Let's start with who Mr. Remez is. He is a former firefighter who suddenly took up medicine and programming for no reason at all. According to the publication Sekret Firmy, Remez used to be an assistant to a local Deputy, and then went to unauthorized opposition rallies. Apparently, he didn't like the power. It seems that it was not possible to make money on this, and he decided to get it from the budget - from the IIDF.

The essence of the "method" for diagnosing cancer "at home" is a cloud service where you send data from a histological section of the skin. There, artificial intelligence uses a neural network to assess the condition of tissues and the possible presence of a tumor. It is with this that Remez "is running" to investors.

Many experts consider this to be dust in the eyes and worthless letter. But this procedure costs a lot. According to the Sekret Firmy, the cost of Remez's know-how services is about 10-15 thousand rubles per analysis, with an average margin of 25-27%. Not bad! Despite all the rumours, no one has been able to confirm that this is a shell or some kind of fraud. But there is one "but".

According to the authors of the RusBase, allegedly a colleague of Remez, General Director of the Doktor na rabote (Doctor at Work) company Stanislav Sazhin assures that you can get such a service, which is provided by the Remez’s service, for free under the Compulsory Medical Insurance (CMI) in any city of Russia. So can money be taken literally for nothing? Just a nice high-tech shell?

Moreover, the authors of the same RusBase claim that back in 2015, Sazhin stated on Facebook (today access to this page is blocked in Russia):

"The topic of medicine is partly close to me, so today I will tell you about another startup of the IIDF - #UNIM. Someone Alexey Remez and accomplices using state funds (!) organized a wonderful office for taking money from cancer (!!) patients and their relatives. IIDF gave Remez more than 15 million rubles and arranged a speech to Putin. Remez simply lies and capitalizes on the poor awareness of patients and their fear of death from cancer."

Today, it is not possible to determine whether this quote actually existed. But what is important: this is an extremely serious attack on Remez. And Remez sued Sazhin. The second plaintiff was UNIM startup itself.

What is the result? As the authors of RusBase with reference to Remez himself report, allegedly he simply did not appear in court. As a result of three court sessions, the claim was left without consideration.

Why go to court and not come? Remez understood that he could not win the trial, but he wanted to create a positive image - look, I'm defending my honor and reputation!? Even more interesting, the IIDF refused to sue Sazhin at all.

Despite all this, Remez’s UNIM is very successful. So much so that it has already signed 41 state contracts worth more than 45 million rubles. So far, there is no contract with Russian Railways structures for their hospital. The fact is that, as Vedomosti writes, so far we are talking only about the Digital Pathology software itself, the license for which was sold by UNIM.

Today, only 16% of the company is owned by IIDF-Invest, the structure from which UNIM received money for the implementation of the startup. Remez, as already mentioned, has 36.8%. Another 10.3 per cent - owned by the former Vice-President of Rostelecom Alexey Basov, and another 28% -  Medme LLC. Let's have a look at everyone more thoroughly. 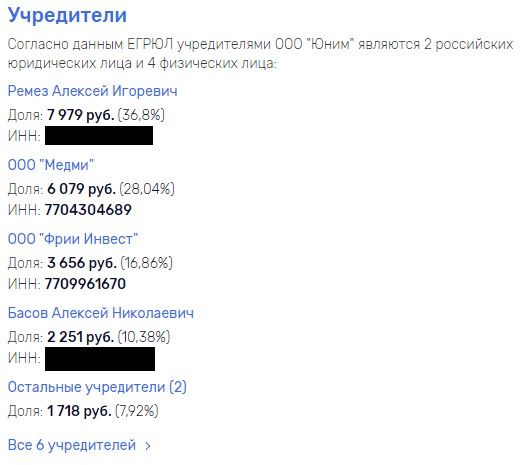 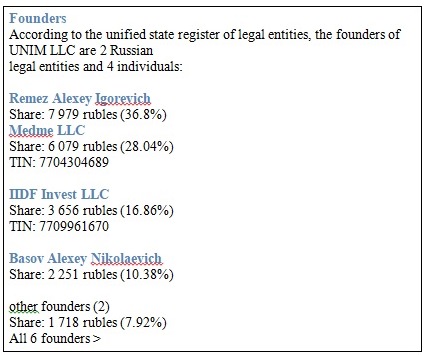 Remez himself is the founder of as many as six organizations, many of which have signs of fictitiousness. He owns 100% of the shares in Volgastarstandartsnab LLC, where only one employee works with the authorized capital of 10 thousand rubles. All financial indicators for 2019 are zero-based. 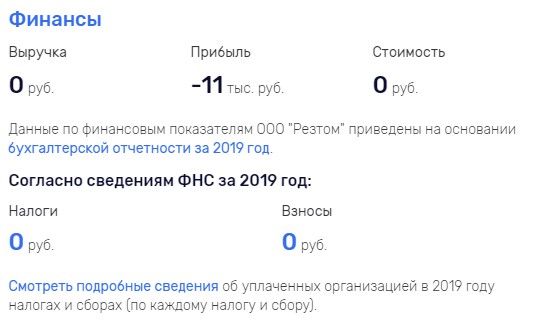 Another company - Reztom LLC. Same situation, only worse. One employee per 10 thousand of the authorized capital. At the end of 2019 - zeros and a loss of 11 thousand rubles. It looks like the classic "intermediaries". If these are not "intermediaries", then what? Fictitious offices that did not "shoot" like UNIM, and were left without budget finances?

As for Basov, he became a Vice-President of Rostelecom in 2013, and left this post in 2017. Just when UNIM was gaining momentum. Soon, he invested almost 15 million rubles in this company. Apparently, he saw an unprecedented potential. But some of the money, as mentioned, was received from the budget through the IIDF, and now they are earning using state contracts. Could Basov tgether with Remez have found a gold mine?

Basov is the founder of a number of offices. And again - signs of possible fictitiousness. For example, JSC RS-Park with an authorized capital of 3 million rubles has zero revenue and a profit of 6 thousand rubles at the end of 2019. Where such incomprehensible numbers come from. The value of the company's assets is 3 million rubles. Apparently, the same 3 million that contributed to the authorized capital. However, the address information is incorrect. Anything hidden? 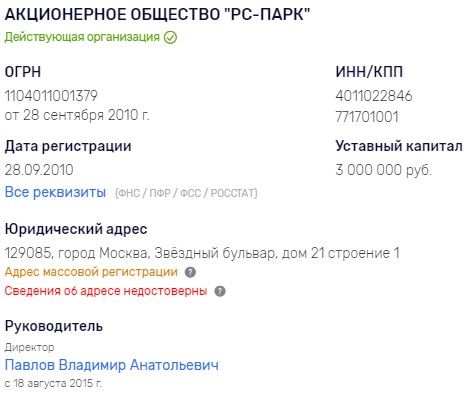 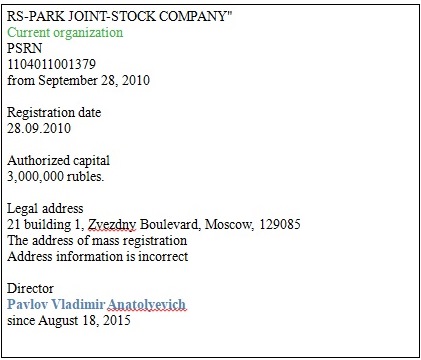 But the most interesting of the current owners of Remiz’s UNIM is Medme Investment Fund LLC. It is fully controlled by the Dutch offshore company Medme group B. V. If budget money received under state contracts is withdrawn from UNIM, it is most likely there.

It would remain unclear who might be behind it. But the General Director of the structure is a well - known character - Valentin Doronichev, the founder of the scandalous medical network Invitro. Doronichev may be the main beneficiary of the whole UNIM story today. 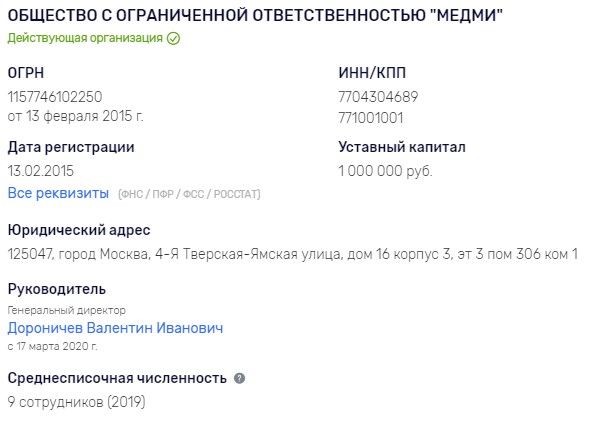 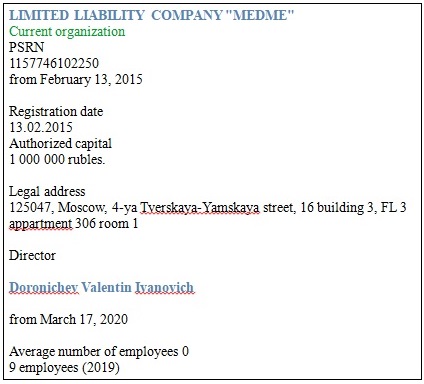 Valentin Doronichev is the founder of as many as 18 companies. Most of them are active. And is it necessary to say that, by analogy with other mentioned characters, his companies are very, very dubious from the point of view of financial statements? But more interesting is the fact that Invitro itself has become overgrown with so many scandals that Doronichev today, apparently, does not want to be mentioned in its context at all.

In the past, Invitro could have been involved in the export of Russian biomaterials abroad. President Vladimir Putin spoke about this problem in the country. The situation was described by journalists of Delovoy Kvartal NSK. The publication referred, among other things, to the words of the chief sanitary doctor Gennady Onishchenko:

"Nowadays, we have many laboratories that conduct clinical research, these are foreign laboratories, for example, Invitro. We allowed them to the most intimate. Today, in many clinics in major cities of our country, they conduct research, conduct high-quality research, but they have huge opportunities to study this material on the territory of our country and transfer data abroad."

Due to this, the question arises: does Remez’s UNIM transmit data about Russians? The cloud service and people who give information about themselves can only contribute to this.

Or another major scandal with the brainchild of Doronichev. According to the authors of the VC.ru website, allegedly ex-employees of Invitro accused the new head of marketing of firing the entire Department without legal compensation and explanations. Who knows — perhaps, Doronichev himself introduced similar practices in the past.

In any case, it is an issue of serious concern: in whose hands, in the case of Remez, Basov and Doronichev, the biological materials and data of the Russians turn out to be. And it would be good if this cloud service really worked, and was not a banal shell for siphoning funds from the budget and pockets of cancer patients.