Raylyan on corruption "rails" of RZD?

What does the former owner of one of the largest RZD contractors, Yuri Reylyan, have to do with the corruption scandal with possible embezzlement during the construction of RZDstroy facilities in Kuban?

As it became known to the correspondent of  The Moscow Post, a criminal case has been opened in Krasnodar territory against the chief engineer of SMT-6 (Construction and installation trust), a branch of JSC RZDstroy. He is suspected of abuse of office. Allegedly, the general contractor SMT-6 of the branch of JSC RZDstroy and the customer DCRs-YUG - a branch of JSC RZD entered into a criminal conspiracy with the contractor's management and accepted for registration actually unexecuted work. The damage from these actions could amount to 1.5 billion rubles.

However, something else is curious. According to our sources, Yuri Reylyan - in the past the founder and CEO of Spetstransstroy LLC, might have a direct connection to this ugly story.

Spetstransstroy is well known to the domestic construction market. But not by the quality and speed of its work, but by the fact that it is one of the key contractors of RZD, which has been receiving multi-billion contracts from RZDstroy for many years. And, of course, a huge number of problems and scandals that inevitably accompany the execution of these contracts.

According to the authors on the Kovarnaya Koleya telegram channel, allegedly the scheme of possible theft in SMT-6 was literally "copied" from similar works carried out earlier with the participation of Spetstransstroy. Moreover, Yuri Reylyan allegedly has a long and good acquaintance with both the management of RZDstroy and the management staff of its Krasnodar branch. However, neither of this is proven, but it makes one think about a lot.

First of all,  about what is Head of RZD Oleg Belozerov's opinion concerning the presence of such branches and major customers in the ranks of their suppliers, who repeatedly fall into scandals. Does he have his own interest in the distribution of contracts, including Spetstransstroy?

"Golden rain" from the budget for Reylyan

Today, the amount of contracts of JSC Spetstransstroy exceeds almost an astronomical 45.2 billion rubles, of which 42 billion is accounted for RZDstroy. This alone allows to call the company the "favorite wife" of a railway monopolist. 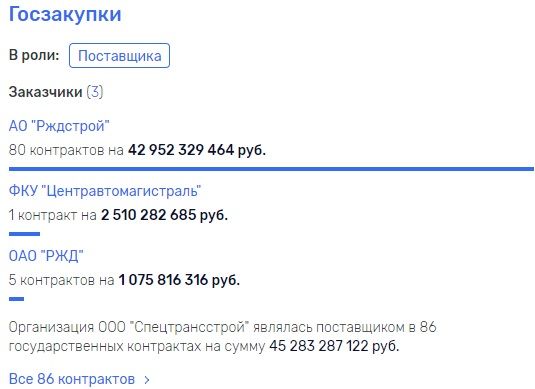 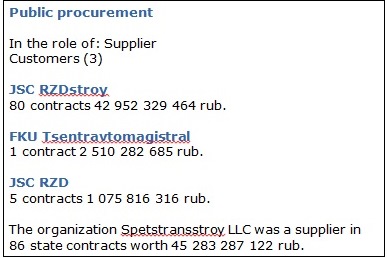 Few people believe that the company's financial statements reflect the real state of affairs of the structure that does not have problems with public procurement. Money from the company could simply be withdrawn to avoid paying a serious amount of income tax.

Even fewer people believe that Yuri Raylyan is no longer related to it. It is rumored that he was involved in so many critical articles and stories in the media that at one point he decided to transfer the business to a figurehead.

Something like this seems to have happened. In September 2019, Yuri Reylyan and his partner Viktor Pigina resigned from the company's founders. In the same September Raylyan ceased to be CEO of the company. The new founder was previously unknown Roman Shlenchak (1%) and Vektor LLC (99%), 100% company belongs to him. 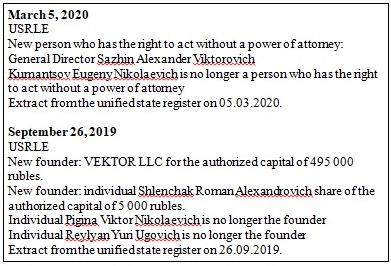 This office has signs of fictitiousness and obviously looks like a figurehead. It was created on May 24, 2019 - less than three months before it took control of one of the largest RZD contractors. One single employee, 10 thousand of authorized capital, zeros in the columns of revenue and asset value, and 387 thousand out of nowhere profits for 2019.

However, something else is even more curious. In the same September 2019, a very well-known character -  former first Deputy General Director of RZDstroy Yevgeny Kumantsov - became new General Director of JSC Spetstransstroy. It was written by RBC. It is surprising that it is the same company which supplied and continues to supply contracts which cost billions to Spetsremstroy.

As a top Manager of RZDstroy, Kumantsov should have known the management and chief engineers of his company's branches perfectly well. Apparently, he knew very well - the press immediately began to spread rumors that now a golden rain will be poured on Spetstransstroy. As if the past wasn't enough.

Apparently, this is why Reylyan realized his mistake and took Kumantsov out of the blow. In March 2020, Kumantsov gave up the position of CEO to an unknown Manager Alexander Sazhin. It is rumoured that Kumantsov, who could act in close cooperation with Reylyan, remained the real head of the company.

Yuri Reylyan is a man of very interesting fate. Being the son of a road policeman, he managed to make a very good career as an official. However, before that, he managed to work as a General Director of Oleg Deripaska's Transstroy LLC, and, as it is rumored, was resigned having worked less than a year.

But he was not upset, because in the same year 2009, he became Deputy Minister of Construction, Housing and Utilities of the Russian Federation, where he got the necessary connections. He became the head of Spetstransstroy in 2016. And, according to rumors, he gained control of the company while still being in the status of Deputy Minister. Which, in fact, is strictly forbidden by law.

Is it surprising that the company immediately became incredibly successful in the field of state orders? As it was rumoured, a big role was given to Reylyan's connections with the then top Manager of RZDstroy, Deputy Director of RZD Oleg Toni. Allegedly, the latter could achieve such competitive conditions when drawing contracts, so that only Spettransstroy and its subsidiaries could win.

Less than a year later, Spetstransstroy became a concessionaire of RZD for the construction of the Northern latitudinal route, a road worth 130.5 billion rubles to transport hydrocarbons in the North of Russia. It was written by Vedomosti.

However, specialists of RZD and its Head Oleg Belozerov for some reason did not worry about the complete lack of working experience of Spetstransstroy in permafrost conditions. Apparently, the opportunity to "divide" 130 billion rubles prevailed.

Not to mention the fact that before this, the cost of the project has repeatedly become more expensive, and the timing of its implementation has shifted. As a result, the project parametres were changed at the request of the Russian Government in 2017, and the payback period for the concessionaire was reduced. Kommersant wrote about this.

Another major scandal with the former structure of Reylyan is connected with another huge project - the construction of the Eastern polygon (BAM-TSR), the contractor for which was Transyuzhstroy - a subsidiary of Spetstransstroy.

It is rumored that there could be a large-scale dividing, which allegedly caused serious problems with the quality and timing of work. The Moscow Post wrote about this earlier.

Transyuzhstroy had a subsidiary that the tax and law enforcement authorities should have been interested in. It is about TYUS-Baikal, which was engaged in the construction of highways. It is currently being liquidated, and for 2019 it received a loss of 847 million rubles on revenue of 314 million rubles. Another fictitious office from which the money received under state contracts was withdrawn?

But the presence of state contracts for 45 billion rubles in such an office may be more shocking - almost as much as in the head structure! As expected, the largest customer is JSC RZD with a pool of 18 billion rubles. RZDstroy is modestly content with 10 billion rubles. 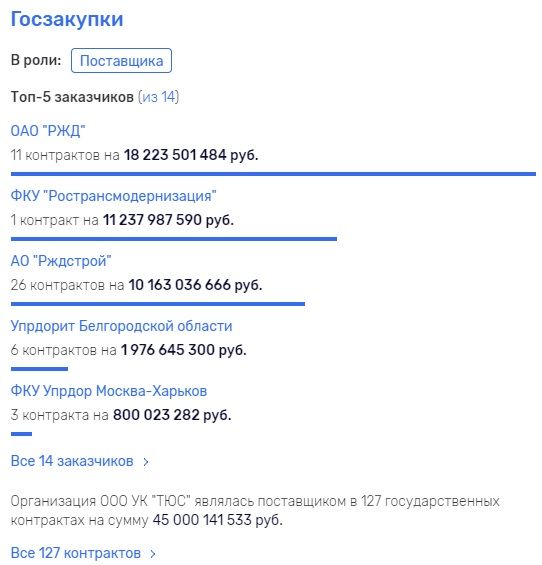 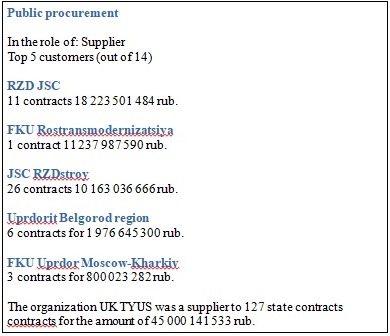 Does anyone have any questions about this? In addition, today 100% of the share of Spettransstroy in TYUS is pledged to Leaderstroy LLC, the founder of which was previously Artem Shevelov, and its predecessor Razvitie LLC of Anatoly Antipov.

The latter was previously a shareholder of Transstroybank, co-owned by RZD Vice-President Oleg Toni. A coincidence? Or a whole group of people who "divide" budget billions for the construction of objects for RZD?

"They don't get out of the courts"

So if they divide it, why don't they do it without delays and problems with the quality of work performed? But the opposite is true - there is a huge number of claims against Spetstransstroy and its subsidiaries. They are constantly suing RZD for improper execution of contracts.

In January 2020, we saw a new episode of this confrontation: RZD filed two lawsuits against Spetstransstroy.  According to the first one the sum was 826.2 million rubles, and according to the second one - 737 million rubles. The reason for both claims were delays in the execution of state contracts.

Both claims were satisfied. But what is one and a half billion in state contracts worth in comparison with more than 40 billion rubles? Just a drop in the ocean. Despite the fact that these are not the first claims - in 2018, RZD has already achieved payments from Spetstransstroy for 26.4 million rubles due to delays in two construction contracts. So, this is an ordinary situation for them.

It seems that for Russians, too, it has already become ordinary to have such characters and companies that receive billions from the budget, and then break the terms and other conditions for the execution of contracts.

It is said that earlier, back in the 90s, Yuri Reylyan was familiar with many "criminal authorities" of the Krasnodar territory, who could gain the audacity, resourcefulness, and in some places the ability to act head-on to achieve their goals. It is unknown whether this helped him or not. It is also not known for certain whether this is true or rumors of detractors.

However, this style of doing business, with muddy offices, possibly - figureheads and warm relations with those in power and officials of state corporations, does not exactly benefit the domestic construction industry.