Qiwi Bank: no sorry for "bird"

Top management continues to "run" from the Qiwi group. The indicators of the bank of the same name leave much to be desired, and detractors believe that this is not a bank at all, but a banal "high-risk payment".

As the correspondent of The Moscow Post reports, the financial director of the Qiwi group, which manages the bank of the same name and a network of payment terminals, Pavel Korzh intends to leave the post. He was appointed in December 2020 and served only a few months.

The fact that Korzh left the organization is not surprising, since the position of the financial director has long been "unpromising". Moreover, many people say that Qiwi Bank may be associated with cryptocurrency, which is actually completely illegal. 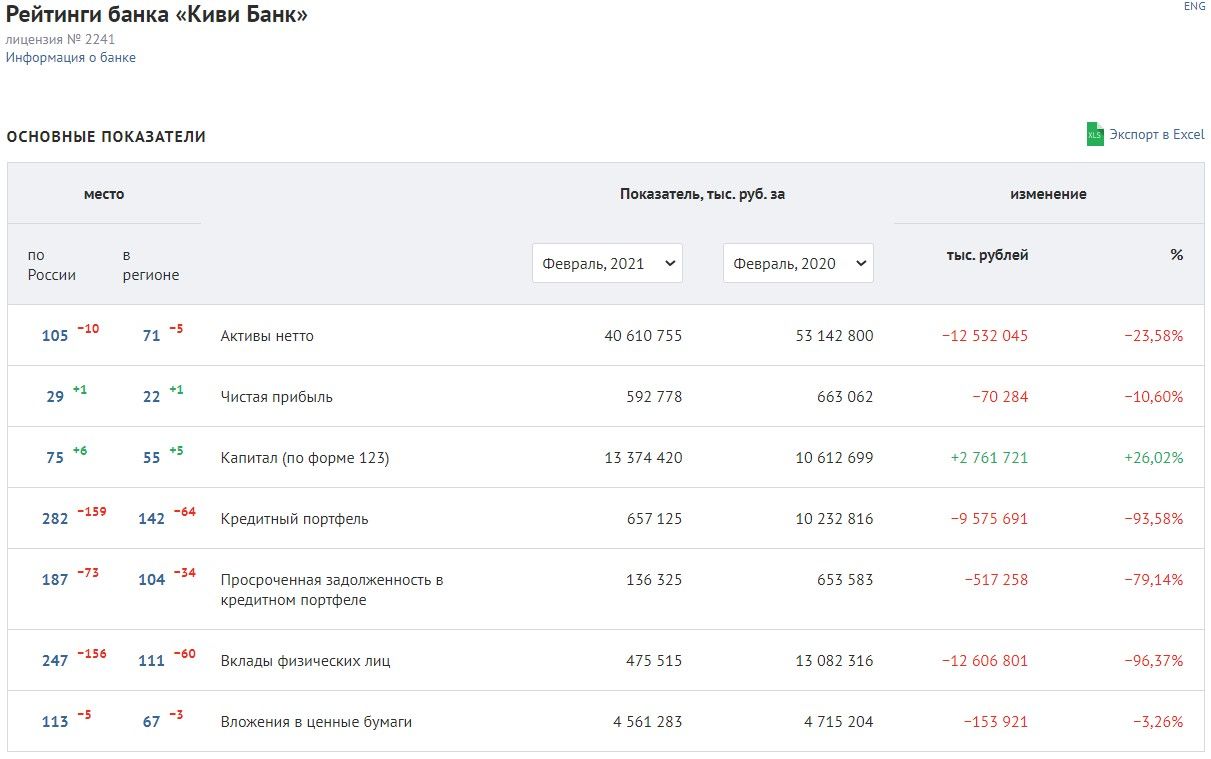 At the same time, the outflow of legal entities from the bank is not so significant - only 5.7%, or 482 million rubles. The only real plus is an increase in return on assets by 3.8%. But the assets themselves were reduced by almost a quarter, and the return on equity immediately sank by 28%. One of the key credit ratios H1 was in the "red" zone - minus almost 7%.

Significant, isn't it? But this is for a year. And, returning to Mr. Korzh, for the last reporting month of his work from this year - the picture is even more unsightly. After all, only in the last month, from January 2021 to February 2021, the decline in assets was 24%. For a month - almost as much as for a year, in terms of scale. It's a landslide. Deposits of individuals in just a month decreased by 70%. They just run away from the bank, like from a sinking ship. 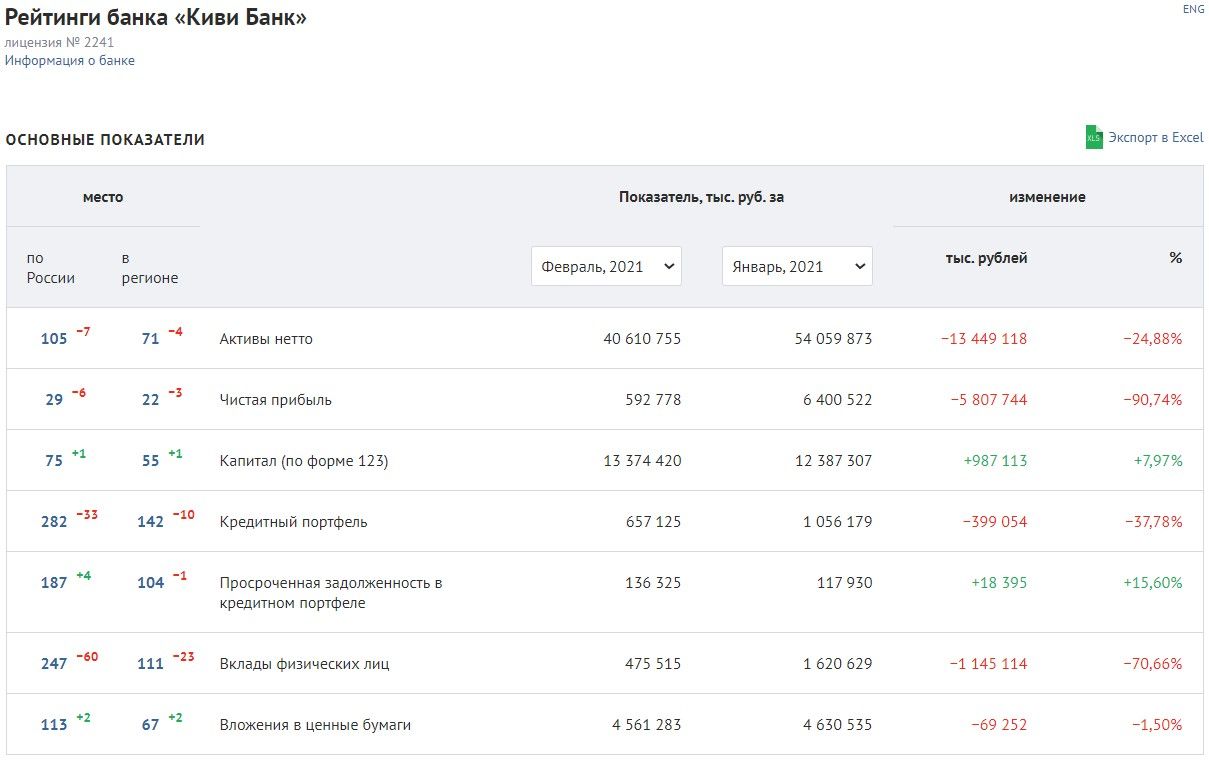 Net profit decreased by 90%. At the same time, the question of how the bank was able to lose nine-tenths of its profit in one month hangs in the air. It seems that the money from the bank could simply be withdrawn. In this connection, with the possible attention of the Central Bank? And it seems that the regulator is already paying attention to this.

At the end of last year, in December, when Korzh came to the post of financial director, the Central Bank restricted a number of operations of Qiwi Bank for up to 6 months. The restrictions affected payments to foreign trading companies and money transfers to prepaid cards of corporate clients. This is reported by  Rossiyskaya Gazeta.

Once again, the bank was banned from making payments to foreign trading companies. Before that, we saw a huge drop in assets, profits, and the flight of depositors. And again the same question — weren’t the funds withdrawn from the bank - just in favour of foreign companies? There is no answer to it, but something else is known.

Solonin formally owns only 16.9% of the Bank, while the nominal holder of 79% of the shares of the financial institution is the offshore BNY (Nomines) Limited. That is, the money could flow abroad, dissolving in foreign accounts, and not find the end. However, the Central Bank still cannot impose a ban on transactions with a nominal holder of shares.

In view of all these unpleasant events for the bank, the rating agency Expert RA downgraded the credit rating of QIWI financial company to the level of "ruA", the outlook on the rating is "stable". The rating removed the status of "under surveillance". Previously, the company had a rating of "ruA+" with a "stable" outlook.

Most likely, this rating will soon have to be revised again for further downgrades. The fact is that the actions of the Central Bank, based on the real state of affairs in the credit institution, caused a collapse in the value of the group's securities. In just one day, the depositary receipts of one of the largest payment service providers fell in price by almost 12%. This is written by Rosbalt.

It may very well be that Pavel Korzh, when he came to the company in December of the same year, 2020, and saw what state it was in, preferred to rake the Augean stables, because if they collapsed, they could fall right on his head.

But there is another version, in which the deplorable state of Qiwi is only an addition to the company's "skeletons in the closet". And they are connected not so much with the current financial situation, but with how Qiwi appeared and developed in general, and who these people are - Sergey Solonin, and another co-founder, already a former co-owner of the structure, Andrey Romanenko. And what their methods are.

Andrey Romanenko sold his stake in the group in 2017. At that time, he said that the reason was a desire to focus on other projects, but it looks like an excuse. After all, before that, Romanenko got into a major scandal related to the general of the Main Directorate of economic security and combating the corruption of the Ministry of Internal Affairs Denis Sugrobov, and possible cash out of illegally obtained Qiwi funds, through payment terminals.

As entrepreneur Denis Dushenov told Moskovsky Komsimolets, the entire payment terminal market, where Qiwi was developing so successfully, was supervised by the Main Directorate of Economic Security and Combating the Corruption. And it was General Sugrobov. Recall that back in April 2017, Sugrobov received 22 years in prison for creating a criminal community and 14 episodes of abuse of authority. His subordinates received from four to 20 years in a high-security penal colony. This was written by RBC.

It was in 2017, when Mr. Romanenko suddenly decided to leave the Qiwi business. According to evil tongues, allegedly he could be involved in the affairs of Sugrobov - he was afraid that the general and his team would be pulled up by him. Such rumours were circulating in the market, perhaps Romanenko was trying to divert suspicion from the company, or just got scared and decided to wait it out. It is still unknown how it really was.

Qiwi is the largest player in the Russian payment terminal market. Now the company should have about 150 thousand terminals throughout the country. Is it possible that such success can be explained by the possible supervision of the Main Directorate of Economic Security and Combating the Corruption?

As Nezavisimaya Gazeta wrote with reference to businessman and human rights activist Vladimir Osechkin, we quote: "The Qiwi system is one of the most powerful generators and a network for collecting cash. Such a structure with an extensive network of agents, money mashines throughout the country in such a short time could not take place without the support at the federal level from law enforcement agencies. Until recently, these cash-out schemes were controlled by the the Main Directorate of Economic Security and Combating the Corruption of the Ministry of Internal Affairs of MIA."

It should be noted that there is no evidence of any involvement of the Qiwi Group, its owners or management in such things  and it has not been presented. But for some reason, it was with the collapse of the empire of Sugrobov and his subordinates that the group of companies began to have serious problems. Which in 2020 only accelerated due to the economic crisis and the coronavirus pandemic. When people simply could not get to the terminals due to forced self-isolation.

However, as for the bank itself, deposits and negative trends in it appeared much earlier. For example, in the same March of 2020, when the pandemic did not yet "enter" into its "rights" completely, the bank experienced a sharp outflow of deposits, and analysts from the Analiz Bankov service spoke about the multiple presence of negative tendency. 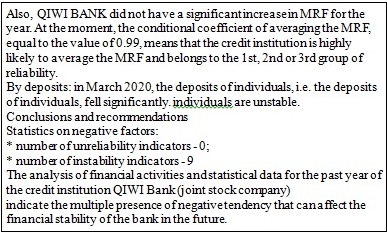 As the analysts continue: "we see that there is some imbalance in the fact that profitable assets are invested in non-interest-bearing liabilities (probably own funds). However, the volume of profitable assets is lower than the average for Russian banks."

Where the Qiwi owners invest their money is a really big question. After all, assets, profits, and profitability have declined. Among the dubious investments of Mr. Sergey Solonin, one can recall investments in strange projects such as Like Centre of Ayaz Shabutdinov. His detractors consider Shabutdinov's actions almost a sale of air. Though, they did not sell air, but franchises with extremely dubious profitability. And at the same time, the kings of the infobusiness conducted seminars about successful cases, of which they themselves are unlikely to have many.

According to one of the authors of the Smart-Lab website, which discusses, among other things, the prospects for investing in certain banks and the market situation, allegedly the main feature of Qiwi's business is servicing high-risk operations. Now this business is actually put an end to. There is no chance that it will be possible to reach some kind of agreement with the Central Bank and continue such business.

The same author adds: "Qiwi is generally not a bank in the broad sense, but a banal high-risk payment system." Perhaps this is the reason for the departure of Pavel Korzh just a few months after he came to the position of CFO, isn’t it? Did the bank turn out to be not at all the credit institution that the owners, headed by Sergey Solonin, could have presented to him? If this is true, then the immediate outcome of the remaining top management can probably be there soon.