"Pyramid" Sopronenko: Igor Shuvalov and his possible relative can leave the country without new schools

The exorbitant interests behind which the head of VEB Igor Shuvalov and his former subordinate can stand, and according to rumors, even a relative of Otto Sopronenko raises the question of whether children in various parts of the country will go to new schools?

It seems that some stinginess of the head of the VEB.RF, Igor Shuvalov, and his faithful "squire," the founder of dozens of companies of the same type, Otto Sopronenko, will leave many regions of Russia without schools.

Three schools at once lost their children in Novosibirsk, where the authorities refused a concession with the structures of VEB.RF and Sopronenko for the construction of educational facilities.

The correspondent of The Moscow Post in the Novosibirsk region understood the situation and assessed the risks for other regions.

We are talking about the construction of three schools in the capital of the region, which was to be done as a customer by Fifth Concession Company Prosveshchenie LLC as a public-private partnership. The most interesting thing is that this is a private structure - a subsidiary of SB Capital LLC, most of which belongs to entrepreneur Otto Sopronenko.

By the way, they say that Otto Igorevich Sopronenko is none other than a relative of the head of VEB Igor Shuvalov.

Until 2018, Sopronenko worked as deputy general director for the sale of assets of Vnesheconombank Investment Company LLC - VEB Capital (100% owned by VEB). It was in 2018 that a state corporation was created VEB.RF. And visionary subordinates, such as Otto Sopronenko, came in handy for Shuvalov in other directions, which, by a strange coincidence, can carry a corruption component.

According to the Governor of the Novosibirsk Region Andrei Travnikov, the decision to abandon PPP with Sopronenko is caused by an increase in the cost of building materials and other markups due to the difficult situation in the economy. Like, let's switch to the usual scheme (direct state order). But aren't the same building materials purchased through the state order?

According to evil tongues, the refusal could be associated with possible corruption risks that local authorities could see in the Fifth Concession Company Prosveshchenie LLC, Mr. Sopronenko, and most importantly, his former head - the head of the VEB.RF Igor Shuvalov.

In total, according to the agreement concluded in 2021, six agreements were concluded with the company for the construction of six schools. The total amount of budget financing was supposed to be almost 15 billion rubles. The fate of three more schools is not yet clear. But, given the personalities of Sopronenko and Shuvalov, Novosibirsk should not be encouraged.

Project stalled at the start

All such concession construction projects of schools go within the framework of the same joint project of a number of government agencies, the key of which are the VEB.RF and the Enlightenment Group, where 25% since the summer of 2021 belongs to the same state corporation. Another 25% is for Sberbank, which should also support the project for the construction of new schools.

Igor Shuvalov became the Chairman of the Board of Directors of the largest Russian publishing house with state contracts worth 70 billion rubles. In fact, through the company, he gained control over 95% of the market for educational literature in the Russian Federation - this is almost a strategic asset that many would like to receive. It seems that VEB managed to do this as part of a large-scale pumping of third-party assets. Enlightenment is one of the most successful, with revenue of 21 billion rubles over the past year.

It is also interesting that the former owners of a significant part of the company, Vladimir Uzun and Oleg Tkach, remained among its co-owners. It seems that they simply agreed with them: they will not leave without a "piece," but most of the funds will be distributed through VEB

Is this not enough for Shuvalov?. And so, almost immediately after the purchase of 25% in Enlightenment, plans were announced for the construction of new schools for PMEF-2021, and with great pathos. Like, we are opening a new era of PPP.

He, Shuvalov, announced the creation of a special company "ProSchool" (a subsidiary of "Enlightenment"), which was supposed to work throughout the country and deal with the construction of schools. That is, it seems to lobby for the project at the regional level. But today nothing is heard about ProSchool - there is only one VEB and Sopronenko concession companies everywhere.

After the announcement, the project came across the comments of President Vladimir Putin. According to the project, the construction should be based on the principles of PPP, and financing from three sources: local and regional budgets, as well as banks.

Putin reminded Shuvalov that the Ministry of Education is in charge of the educational industry. "As far as I can remember, there was an idea to set up a board of trustees. It doesn't matter what to call it, it is important what powers this structure will have, "Putin said. His words are quoted by the Kremlin press service.

Could the president anticipate a possible "drag" of budget flows towards structures subordinate directly to Shuvalov?

Immediately you can recall rumors that at one time Igor Shuvalov could lobby his former subordinate Otto Sopronenko for the post of head of the Ministry of Education. And here the "puzzle," as they say, folds. After all, if information about family ties is confirmed, then everything becomes clear.

Thus, Sopronenko could distribute billions of government contracts that would also go through the "Enlightenment," which ended up in the contour of VEB.RF Shuvalov. But it didn't work out.

Returning to schools, the opening of a "new era of PPP" did not work, and implementation in the regions stalled. In 2022, projects that had already been agreed with the authorities of a number of regions began to "crumble."

Shortly before Novosibirsk, a loud scandal turned into plans to build a school in the north of Voronezh. The mayor of the city Vadim Kstenin refused to conclude a concession agreement for the construction of a much-needed facility. The reason is formally the same as voiced by Travnikov - significantly increased costs for the implementation of projects, which was initially estimated at 2.5 billion rubles.

About 1.5 thousand schoolchildren were left without a new school. If these volumes are hypothetical

The school was to be built by a similar office - Twenty-seventh concession company Prosveshchenie LLC, the owner of which is the same SB Capital LLC, 93% of which belongs to Otto Sopronenko. More interesting, the company clearly resembles a fictitious one. After Voronezh refused to cooperate, there is not a single employee in it, zero revenue and "minus" other indicators.

The company was prepared as a "gasket" for carrying money, but she was not going to conduct real activities? In addition, most recently, OOO Childhood Infrastructure left the founders. And it is already directly related to the Enlightenment Group of Companies.

The co-owner of the LLC is 8% "First Concession Company Enlightenment." It is 80% owned by Otto Sopronenko, and 20% by Complex Technical Equipment Enlightenment LLC. Its 99% shares are directly from the Prosveshchenie Group of Companies.

Moreover, all shares of "First" are pledged by "Sberbank." Apparently, this is the very financing from banks. Of course, credit, and, of course, from banks with state participation - that is, in fact, from our funds with you. 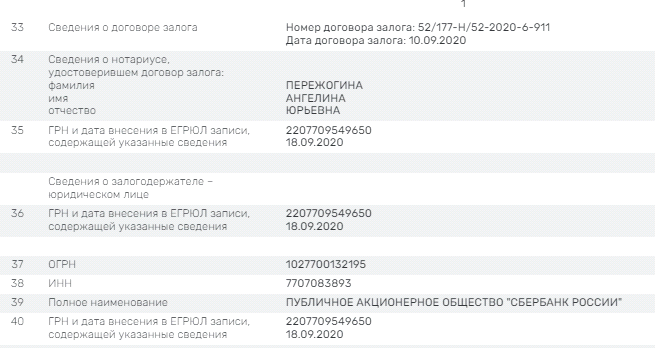 And who will return this money if projects on schools in the regions fail one after another?

As if under a carbon copy

But this isn't enough. The fact that nothing is heard about the ProSchool company, which was supposed to become the project operator, we wrote. But after all, more than two dozen clone companies appeared with it - those very concession companies, some of which are directly owned and part indirectly owned by Otto Sopronenko.

In total, we counted 27 such companies, starting with "First," and ending with "Twenty-Seventh," "failed" in Voronezh. At the same time, Sopronenko himself was the founder only in the "First" and "Fifth" companies, and acted as the head in more than 30 organizations. 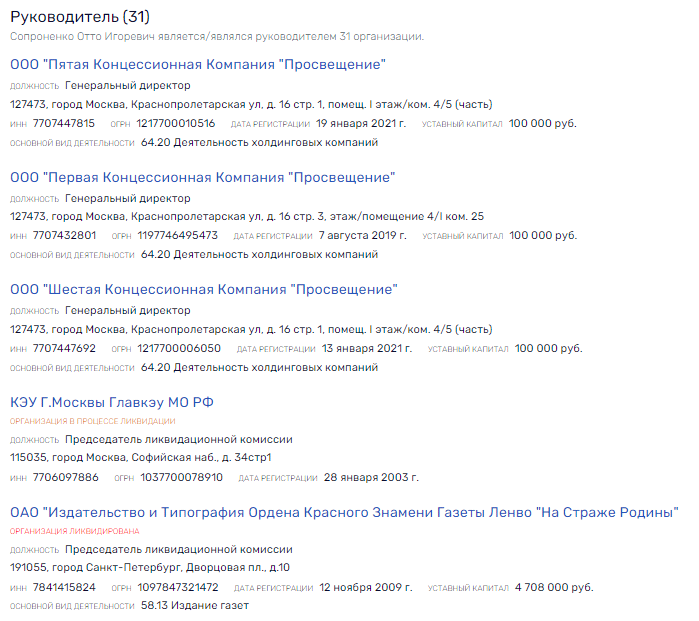 In most other "numbered concession" there were "gaskets": "SB Capital" or the same "Childhood Infrastructure." But they also lead more to Sopronenko than directly to the Enlightenment. One gets the feeling that most of these clones are just Sopronenko's "private shops."

At the same time, SB Capital, most of which belongs to Sopronenko, was immediately connected with 66 organizations! And 35 of them are associated with Sopronenko. Among them are not only "numbered concession," but also, for example, such as LLC "School of New Lyads" from Perm. There is only one employee in the structure, the authorized capital is 10 thousand rubles, does not conduct financial activities. What kind of "lad" they are doing there is not clear. 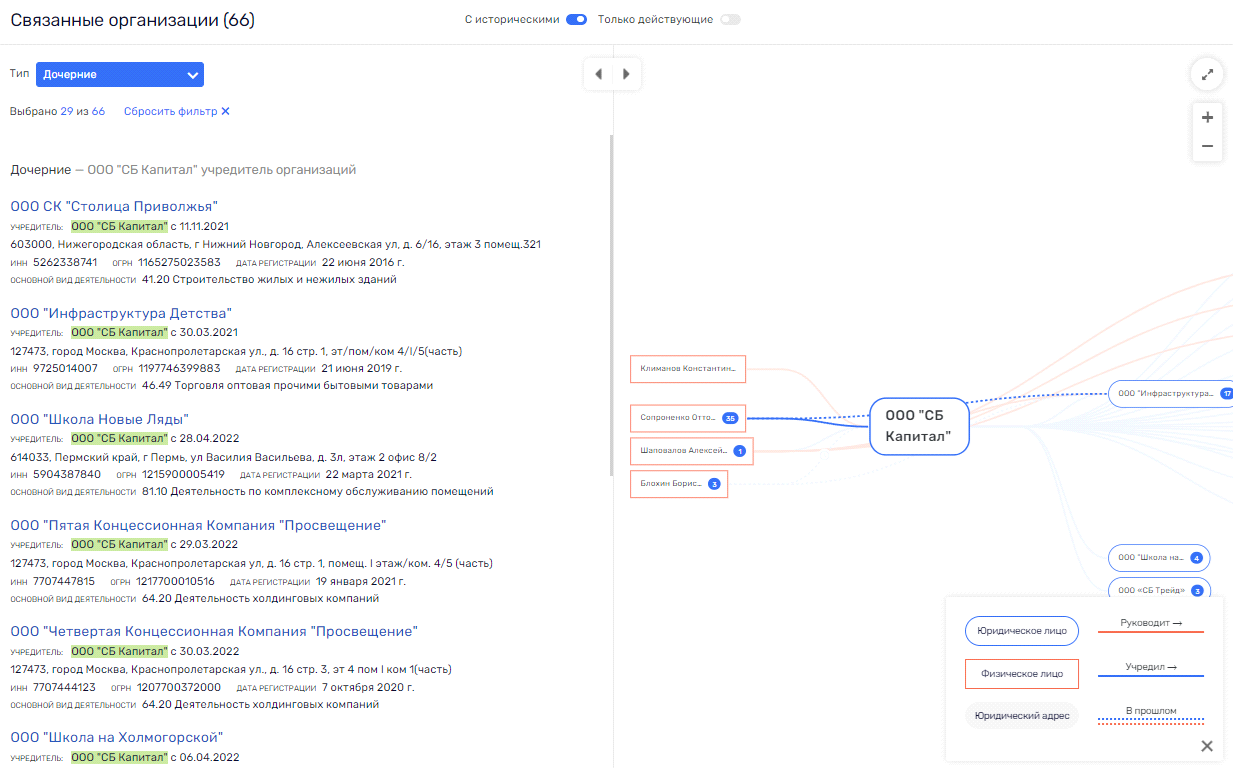 That is, the company has signs of fictitious. And the same can be said about almost all numbered concession structures to which Otto Sopronenko is related or structures related to VEB.

As an example, we take the "Fifth Concession," which was established directly by Sopronenko. One employee in the staff, zero revenue, losses of 70 thousand rubles. Dummy?

But much worse is the case with "First," which is tied directly to the "daughter" of the "Enlightenment" group of companies. There, the hole in the budget has already amounted to 11 million rubles at the end of 2021. 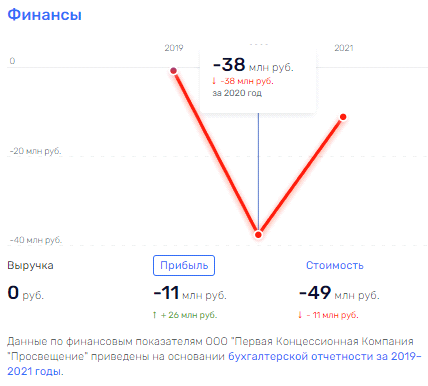 Take "Fourth" - also losses, negative value of assets, shares of "SB Capital" - pledged. "Second," "Third," "Sixth," "Ninth" - almost the same story. Minus in the absence of a state, modest authorized capital and a reminder of Sopronenko in the leaders or founders.

A reasonable question arises - where did these concessionaires build something in general? You will laugh, but successful and problem-free cases could not be found. But we remember the volume of financing for the project from VEB - 85 billion rubles. RBC wrote about this.

It seems that this money will never be spent on the construction of educational institutions. And tens of thousands of schoolchildren will be left without normal schools. Their right to education will be violated.

Or, another option - most of these funds have long been "mastered" by the right people, and spread across the accounts of dozens of the same type of concession companies. In this version of schools for our children, for some reason, too, is not provided.

Returning to Igor Shuvalov, it should be recalled that earlier one of his closest associates, ex-deputy at VEB Mikhail Poluboyarinov, was appointed general director at Aeroflot PJSC. Then they said that he was a protege of the former deputy prime minister, and that he allegedly now has an influence on the largest air carrier in the Russian Federation.

What happened to Poluboyarinov in the end? Having barely worked at Aeroflot, he left the post of general director. Reports of this appeared shortly after others - about the dismissal of Andrei Kalmykov, head of the subsidiary of Aeroflot, Pobeda. According to evil tongues, this could have happened allegedly due to corruption risks and Poluboyarinov's former scandals. There were other rumors - allegedly, he could simply steal and escape from the country.

The question arises whether such a fate awaits a possible relative of Igor Shuvalov, Otto Sopronenko.

Photo on the main page: Otto Sopronenko's personal page on the social network