Deceived real estate investors  of LCD "Pirogovskaya Riviera" fight against God Nisanov, and blame the businessman in the freezing of the project. Citizens are asking Putin to suspend God Nisanov from managing their future real estate projects.

The deceived equity holders of Pirogovskaya Riviera residential complex are outraged by the actions of the head of the GK Kievskaya Square, the developer God Nisanov, who is blamed for stopping the construction and seizing the business of the head of SDI Group Ilgar Hajiyev. They made a petition in which they demand to bring the king of Russian real estate Nisanov to justice and return the past developer.

For over a year, a messy conflict between businessmen God Nisanov and Ilgar Hajiyev has continued to develop. Recently, a petition has appeared on the Internet from interest holders of Pirogovskaya Riviera residential complex, which cannot be completed due to a clinch that included entrepreneurs.

Today, Ilgar Hajiyev is forced to be outside of Russia due to death threats. He claims to be the victim of the head of the company Kievskaya Ploshchad, God Nisanov and his relatives.

The network has a lot of information about God Nisanov and his position on this situation. The man obviously does not spare money for his own PR. Therefore, the UtroNews correspondent spoke with Ilgar Hajiyev to present his point of view to readers, to tell how he got into business and how this conflict arose.

According to Hajiyev, Nisanov literally deprived him of his business. The hostages of the situation were ordinary people who wanted to buy housing in the Pirogovskaya Riviera residential complex, once a joint project of the businessmen.

Riviera holders are worried. They support Hajiyev and believe that the Nisanov team simply physically removed Ilgar from his own business.

After that, the construction was stopped, and the accounts of LLC Specialized Developer Comfort Invest, which is part of the SDI Group of Ilgar Hajiyev, were frozen.

Hajiuyev has been in business for a long time. His first business was a grocery store, he opened when he was only 17 years old. Since then, he gave many years of his life to both his native Azerbaijan and Russia, where he held the position of a major developer.

In the 00’s, Hajiyev was engaged in the sale of building materials and investment in residential buildings. His performance, focus on results and attention to detail pleasantly surprised everyone with whom he worked with.

In the end, the entrepreneur’s success drew the attention of other market players, including the “Kievskaya Ploshchad” owner God Nisanov.

Hajiuev says that his proper acquaintance with Nisanov took place in 2010. Before this, both entrepreneurs have known each other for a long time, being major players in the development market of Russia.

However, while Hajiyev did not go into large-scale projects in Moscow and Moscow Region, their business interests intersected little. In 2012, Hajiyev met with relatives of God Nisanov, brothers German and Isai Zakharyaev. Together they decided to implement a major development project - RC Pirogovskaya Riviera in the Moscow region. 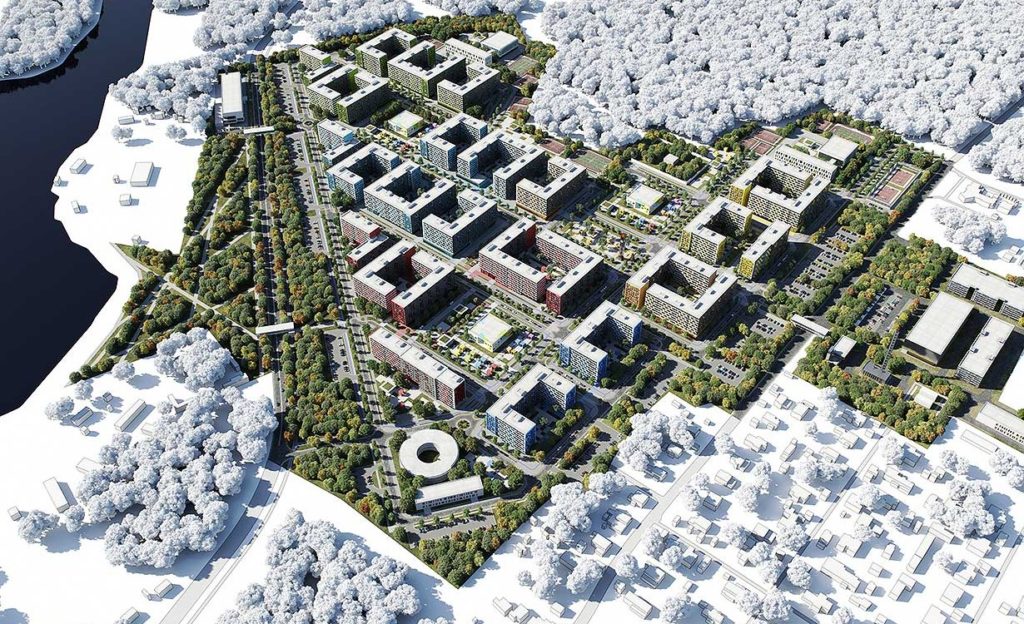 The concept plan of the residential complex Pirogovskaya Riviera

Ilgar Hajiuev claims that at that time he could not even think that in the end he would simply be taken away from his business. Already in 2015, tension arose between  Hajiyev and the Zakharyaevs.

The partners disagreed on the construction process, as a result of which Hajiyev handed over the files to Zakharyayevs for a while. Later on, according to Hajiyev, the brothers were unable to deliver the first phase of the LCD on time.

God Nisanov himself appeared on the scene a bit later. He suggested solving some difficulties that arose with permits for another of Ilgar’s projects - Akkord.Smart-Quarter residential complex in the village of Mitkino, Moscow Region.

But not just out of the kindness of his heart of course, but for half the share of SDI Specialized Developer LLC, which was involved in the “Akkord”. Strange logic - immediately half of the company for helping a partner of people close to you.

In any case, Hajiyev did not yet see the danger from Nisanov, and, although forced, he agreed to the terms of the businessman.

“As a result, the conflict with the Zakharyaevs was hushed up,” says Ilgar Hajiyev. The construction process was transferred under my control, and in 2017, my construction group of companies passed the first part of “Akkord”.

According to the entrepreneur, in the same year, God Nisanov decided to develop this successful experience, and offered Hajiyev participation in construction tenders, dividing the profit from them in half. Ilgar agreed. To implement these projects, the partners took Akkord-Spetsstroy LLC, one of Hajiyev’s construction companies.

However, such a partnership with the gaining momentum of Hajiyev did not suit one of the Zakharyaev brothers - Solomon. “He constantly created intrigues and gave guarantees to destroy my entire business,” Ilgar notes. To add to that, he claims that he has evidence - saved messages from Salomon.

In this conflict, Nisanov first stood up for Hajiyev, and even forbade Salomon to communicate with the entrepreneur. “However, the brothers did not calm down and plotted, sowed discord between me and Nisanov,” says Hajiyev.

As a result, the tension was still growing. And later what happened happened: "Nisanov literally began to plunder my business." To do this, he began to withdraw from all joint ventures Albert Imanilov, Nisanov's confidant, for which the shares of the head of the GK “Kiev Square” were issued.

However, Imanilov did not leave the projects where there was still something to steal.  As an example, Hajiyev indicated the company LLC Specialized Developer ComfortInvest, the developer of the Pirogovskaya Riviera residential complex.

In 2018, Nisanov and Hajiyev launched a new project for the construction of Vernad Sky residential complex, which combined a three-story shopping center and more than 20 floors of residential real estate. In September of that year, sales began that literally blew up the market. By November, more than 40% of the living space was sold.

Apparently, then, Nisanov started his plan to leave Hajiyev with nothing. Such success aroused increased interest from the partners of the businessman. As a result, Nisanov suggested revising the previously agreed conditions for the distribution of profit - and it was expected to be in the amount of about $ 200 million.

The businessmen forced Hajiyev to leave the project. Most likely they decided that they could earn these $ 200 million by themselves, and Ilgar was offered only $ 5 million in compensation for his expenses. For this, Hajiyev claims, Nisanov’s people started a financial audit, which showed a report on expenses of Hadzhiev’s structures in the amount of $ 5.6 million.

However, this was only one part of the conflict. In addition, Nisanov promised Hajiyev to win construction contracts for 2019 in the amount of about 20 billion rubles. Of these, the mayor of Moscow, Sergei Sobyanin, was supposed to receive 12%. Hajiyev agreed only on 10%, after which Nisanov put forward draconian and harsh conditions for the distribution of profits.

According to them, 50% were to go to Nisanov himself, 15% to his trustee Elman Bayramov, and to Hajiyev only 35%. What makes this unfair, is that at the same time Hajiyev had to bear all the costs of implementing the contracts. Of course this arrangement did not satisfy Hajiyev. 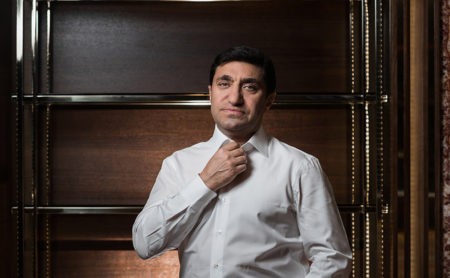 God Nisanov is not used to being refused to

The entrepreneur claims that Nisanov clearly did not expect a refusal. It seems that he has long forgotten how to hear the word "no." It was after this that Hajiyev began to receive threats, as a result of which he left Russia, fearing for his life.

According to Hajiyev, the forceful capture of the SDI Group occurred in January 2019. The twentieth of January and the days following, employees of the private security company Vityaz came to the company’s offices. They began to host, taking control of documents, drove out employees and put up security.

It is noteworthy that the entire process was captured by surveillance cameras installed in the premises. Later, the captured moments were compiled into a video clip , which in itself could serve as evidence of illegal actions in relation to Hajiyev’s business.

On the rollers you can clearly see how strong young people set their own rules in SDI Groups. The prosecutor's office and other law enforcement agencies are inactive. However, one should not be surprised here, knowing the reputation and connections of the “king of Russian real estate” God Nisanov.

After that, money began to disappear from the accounts of Hajiyev companies. The entrepreneur claims that this was done by forging financial and other documents, including loan agreements, the provision of non-existent services, and so on.

The funds were allegedly withdrawn to front companies of Nisanov and his associates. Of course, not only Hajiyev, but also hundreds of equity holders of his projects were affected by this situation.

Due to the inaction of law enforcement agencies, Hajiyev was forced to look for other legal ways to achieve the truth and protect his business and good name. He created the Center for Business Transparency and Counteracting Corporate Raids in Russia.

Hajiyev emphasizes that the center’s work is not directed against Russia, but only to protect entrepreneurs who are victims of such circumstances and the inaction of law enforcement agencies. “I will use all the levers, wherever they are, to help myself and others,” concludes Hajiyev.

Today, entrepreneurs are actively turning to the center of Hajiyev. The organization holds meetings and consultations in the European Parliament and the Bundestag. However, the situation with SDI Groups still remains suspended. The influence and possibilities of God Nisanov are greater than ever. But this does not mean that such actions should not be fought, said Hajiyev.

For our part, we will definitely follow the development of events. Because if everything that Hajiyev says is true, more than one decent businessman will become the victims of such actions. The entrepreneur in no way intends to give up.