Punia takes a detour with the help of Golikova?

Has Indian businessman Vikram Punia Singh, who "made" his business in Russia on generics, decided to attract the state to "take off" the license from the US company?

According to the correspondent of The Moscow Post, Vikram Punia, President and owner of Pharmasyntez, is likely to initiate another pharma- scandal. He plans to get his own company to release an analog of the American medicine for the treatment of COVID-19 — Remdesivir - by a roundabout way. Now the medicine is produced by Gilead Sciences under the Vekluri brand which has a patent for it. Punia has addressed the Government and the Presidential Administration with a request that to use  a procedure known as compulsory licensing. In other words, obtaining the right to use the technology of a foreign company, regardless of the desire of the copyright owner.

Vikram Punia is already known for taking over other people's patents and medicine development technologies. Apparently, did he decide to "get rich" on COVID-19, while involving the Russian authorities in an international scandal?

It is noteworthy that Vikram Punia sent the letter not to the Ministry of Health of the Russian Federation, which is now headed by Mikhail Murashko, but straightly to Deputy Prime Minister Tatyana Golikova. He is rumoured to have a more friendly relationship with the latter, because when she was Head of the Ministry of Health, Punia "was living large" on state contracts and "was pushing" his generics.

As reported by Vedomosti, Punia’s company has developed an analogue of Remdesivir and registered it under the brand of Remdeform. But it can't produce it, since the medicine is protected by the Gilead Sciences patent. Negotiations with the American company have led to nothing. Gilead Sciences, apparently, decided to stay away from  the Russian resourceful businessman. Although voluntary licenses for the release of its medicine were granted in 127 countries around the world.

Punia's appeal will be considered by several departments: the Ministry of Health, the Ministry of Industry and Trade, the Federal Antimonopoly service (FAS) and Rospatent. In fact, this is an unprecedented case when the Government allows the use of an invention without the consent of the patent owner in the interests of national security. But the patent owner receives a proportionate compensation.

The roads of Punia and the American Gilead Sciences crossed in the past. The cancellation of the patent for the hepatitis C medicine Sofosbuvir by Pharmasintez in court was widely publicized. The manufacturer was Gilead Sciences.

On the other hand, why should the Russian authorities get involved in this story, when there is a Russian equivalent - Favipiravir, which, in its turn, is cheaper. According to the state register, the price of a package of 50 tablets is 5 000 rubles, while the generic offered by Punia will cost from 30 000 to 50 000 rubles per course!

"Under the wing" of Golikova

If the generic Remdeform is still registered, then Punia will be able to participate in state contracts for the provision of this medicine under state contracts. And as a result, he will get, as it turns out, a lot of money, won’t he?

It is known that the JSC Pharmasintez company tightly sits on state orders. The organization was a supplier in 186 contracts worth 2.2 billion rubles. Now the company's revenue is 16 billion rubles, and its profit is 2.1 billion rubles. 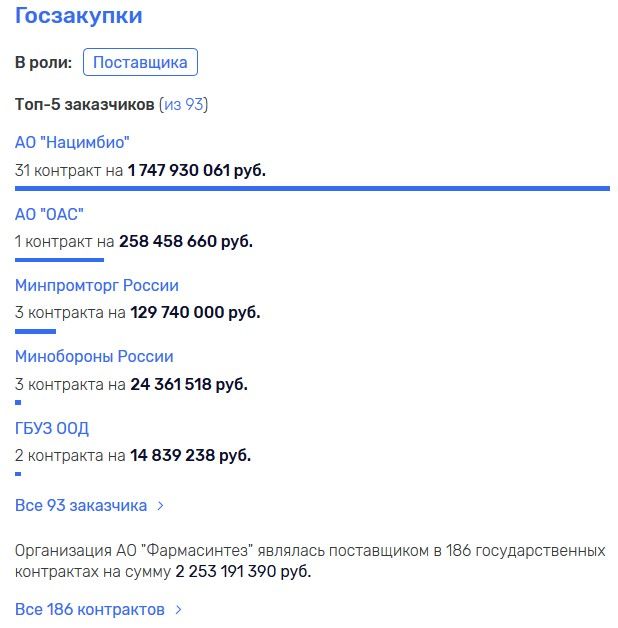 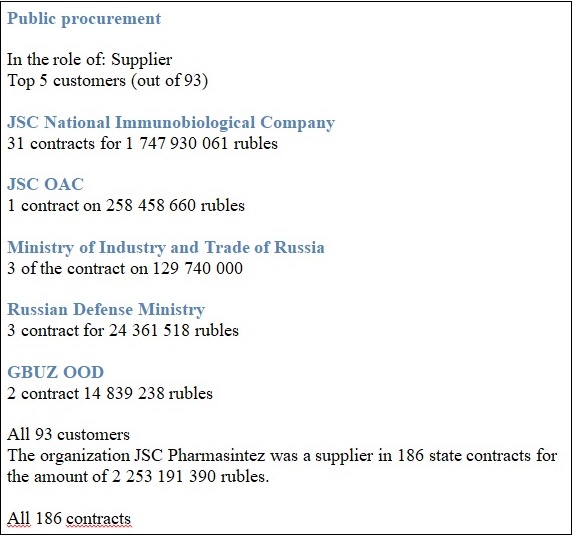 It is likely that the loyalty of the authorities is behind this success of the businessman. Namely, former Minister of Health of the Russian Federation, and now Deputy Prime Minister Tatyana Golikova?

Under Tatyana Golikova, the medicine Perchlozone was promoted to the Russian market, as RBC reported. This medicine is harshly criticized by phthisiologists due to the fact that it has a heavy tolerance, many side effects and a high price.

The state "pushes" dubious Punia’s generics and, at the same time, the businessman even manages to appear in non-payment of taxes.

Thus, two years ago, Pharmasintez was suspected of non-payment of taxes in the amount of 190 million rubles. The office of the IC  in the Irkutsk region opened a criminal case, reported Argumenty i Fakty.

The investigative authorities found that from 2013 to 2014, the company's representatives overstated their spending on the purchase of imported medicinal raw materials, which they bought through intermediary firms registered in offshore zones.

Although these firms did not actually supply the product to the manufacturer, information about this was indicated in the company's accounting report and tax returns, which allowed reducing the tax on the organization's profits.

However, later the case was somehow hushed up, and Punia continued to run his business.

It is worth remembering that Vikram Punia has already been involved in a patent infringement scandal. The Argentine pharmaceutical company Tuteur S. A. C. I. F. I. A. sued Pharmasintez for a year and a half to protect the exclusive right to the invention, as well as to recover compensation for a record amount of 855.7 million rubles.

It was about the medicine Capecitabine: the active substance itself is no longer protected by the patent, but Tuteur managed to patent the method of production of this antitumor medicine. The dispute was eventually resolved peacefully, as Kommersant wrote. But unpleasant memory remained.

Besides, in 2018, the settlement agreement was concluded by Pharmasintez, a former defendant in the lawsuit of the American MSD, which tried to prove the use of its patent for the sugar-reducing medicine Sitagliptin.

Details of these agreements were not disclosed. But the very fact that Pharmasintez uses other people's developments so unscrupulously, and then somehow settles disputes in court, evokes certain thoughts about the dubious honesty of the company.

The lawyers of the Janssen company filed a lawsuit against Pharmstandard (subsidiary of Pharmasintez) for violation of the patent right to the medicine Rilpivirine, used for HIV therapy.

Apparently, Punia's strategy doesn't change over time, does it?

It is worth noting that Vikram Punia is not the first time trying to "get rich" on the Covid topic, while, probably, using the support of the authorities. Thus, in the beginning of the year a recommendation of the Ministry of Health on the use of the medicine Kalidavir (a generic medicine of the American one Kaletra for HIV patients), for treatment of a Coronavirus infection, as RBC reported.

The Kalidavir medicine is a combination of two substances that are believed to help stop the development of HIV: Lopinavir and Ritonavir. It is produced only at the Pharmasyntez factory. Though, can Kalidavir treat from the coronavirus? This is unknown.

However, Vikram Punia, it seems, is not particularly interested in whether his generics treat or not. Is business the main thing?