Popov wished everyone a long IML: from Mishustin to offshore companies with RFI Bank

Courier company IML declared its own bankruptcy. This company was bought in 2014 by immigrants from RFI Bank Stepan Popov, Yuri Kosynkin, Igor Vargin and Alexander Razumovsky.

In 2021, the Central Bank revoked the bank's license to make settlements between individuals and illegal online casinos and bookmakers. The bank's financial problems could also affect the courier business.

The bank was small, but easily experienced crisis periods (for example, sanctions related to the annexation of Crimea to the Russian Federation in 2014) and received licenses from the Central Bank.

As they wrote in the media, the "security guarantor" of the RFI Bank "could be power structures, for which the actual head Stepan Popov is only" Stepashka "- a person who knows how to competently transfer money where he should."

Anonymous Telegram channels claimed that, allegedly, Popov could be "tied" to the current Prime Minister Mikhail Mishustin. According to the authors of the Rosotkat website, allegedly the latter, while still the head of the Federal Tax Service, used Popov as a VAT refund specialist. Then Alexey Udodov came to this place, and Stepashka allegedly engaged in banking activities in the RFI.

"Dirty money" cooperation is not a hindrance

This is indirectly confirmed by the fact that a sample agreement between the RFI and the Russian representative office of Wirecard has been posted on the acquiring market review website. 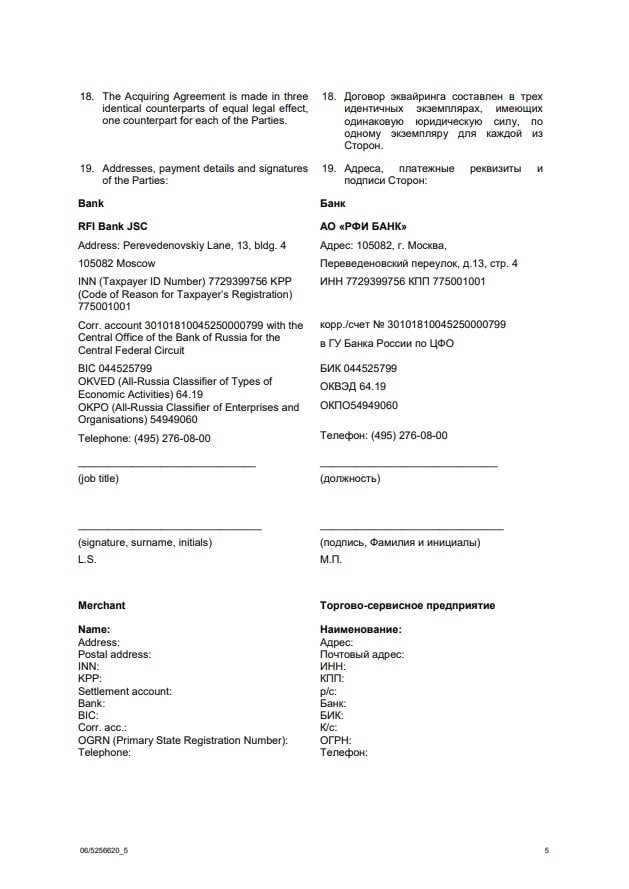 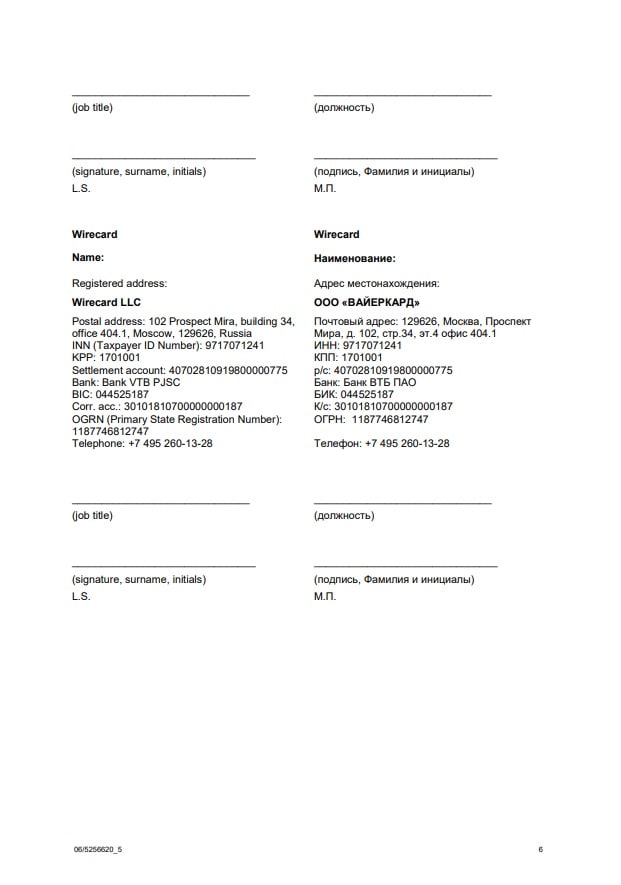 A sample contract between the RFI and the Russian representative office of Wirecard. Photo: screenshot from PDF file https://ekvairing.com/

Wirecard, after "working" with the RFI, quickly "soared to the top" of financial well-being, and just as quickly fell into bankruptcy proceedings. Did the missing financial flows pass through the RFI?

As The Moscow Post wrote, the figures of the owners of Uralsib, which is now controlled by the heirs of the late businessman Vladimir Kogan and Nikolai Tsvetkov, may also loom behind Popov.

Uralsib financed the activities of RFI Bank. It is possible that his money was also in the bankrupt IML.

Recall that the Central Bank revoked the license from the bank in April 2021. And a year before that, the Visa payment system presented him with a fine for his high-risk transactions. Namely, making payments to casinos and bookmakers, as well as operations with cryptocurrency.

Since April 2022, the RFI is in liquidation. Over the past year, absolutely all funds have been withdrawn from there, according to the banking analyst portal. There is reason to believe that the fine from Visa flew for this. So deny after such work with high risk Wirecard clients... 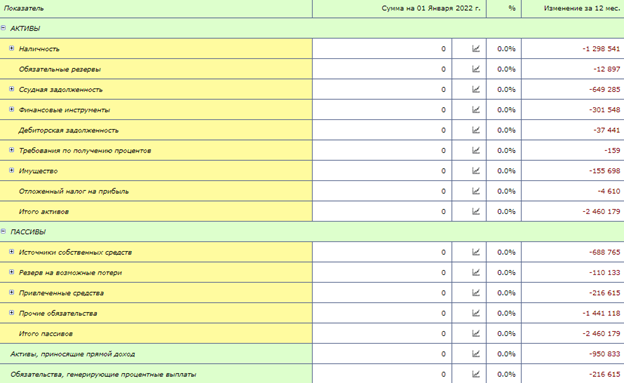 For a long time until 2022, RFI Bank owned the International Technology and Investment Fund, which is engaged in scientific, social and other research and is also a supplier of public services for the Ministry of Natural Resources and its institutions.

The fund included three offshore companies - the British ECABT OVERSEAS INVESTMENTS CORPORATION LIMITED, the Czech company SEMEX S.R.O. and the Ukrainian CRIMEAN ASTROPHYSICAL OBSERVATORY MINISTRY OF SCIENCE AND TECHNOLOGY UKRAINE. " In 2014, all of them became part of the company, in 2016 - revenue from 17 million rubles fell to 1.4 million, and by now it was at zero. Was the fund another Popov's "kubyshka"?

In addition to RFI Bank, he worked at Investcombank Belcom, whose license was revoked in 2006 for repeated violations during one year of the Federal Law "On Countering the Legalization (Laundering) of Proceeds from Crime and the Financing of Terrorism."

For 16 years he also headed the developer of cellular services "Inform-mobile." In 2007, the Ukrainian division of the company was searched in connection with the initiation of a criminal case. It was quickly curtailed, and the intrigues of competitors were blamed for everything.

Although in fact the company was at that time the market leader and almost a monopolist. Hardly anyone would have decided to put pressure on her in this way. So, there is an assumption that the security forces found something illegal in the company's activities, and they covered up the case due to a certain agreement between the beneficiaries of Inform-Mobile and the investigating authorities.

Popov is listed (listed) as a founder in 22 organizations, mainly engaged in property. He's all round in debt. In the construction LLC "YUN" the shares of the founders are pledged by VTB Bank. The ragged revenue of the enterprise indicates a possible withdrawal of money from the company. 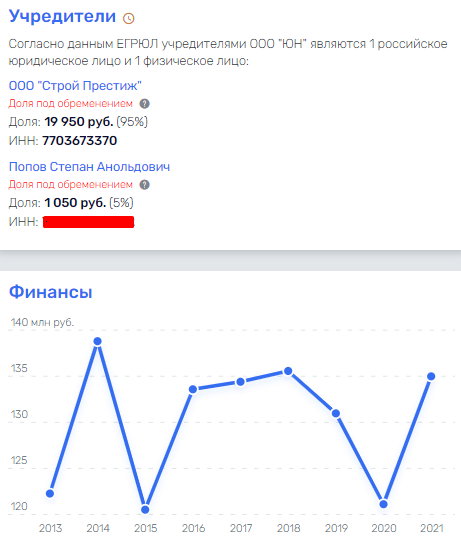 In 2015, it included the offshore company MALTBRIDGE CONSULTING INC. It was during this period that the company's revenue fell to zero from almost 140 million rubles. The Povarskaya company was registered for the same offshore - a share in which Stepan Popov also has. And it is also under the burden of VTB. Andrei Kostin decided to create a new "Trust" from VTB (bank of bad assets)?

We found another interesting connection. Popov was at one time listed as the founder of the now liquidated Media Holding A1 LLC. Now there is owned by the offshore company VERTADIA HOLDING LIMITED, whose director is Dmitry Valerievich Samokhin.

The name of the chairman of the board of the NTV-Plus television company, ex-member of the board of Gazprom-Media, is also called. A funny detail - in 2007, NTV Plus was punished for broadcasting pornography. I wonder if there is a connection between the videos broadcast on the channel and the work of high risk Wirecard customers?

A free man with a mass of oddities

Let's summarize: IML, like many of Mr. Popov's assets, most likely could become a "washing box," which "fed" the former owner of RFI Bank until he started having problems. If investigators undertake to promote the identity of this figure, in addition to the likely theft of funds from creditors and depositors, they can find many other equally interesting aspects of the life of this "citizen of the world," who has an inexplicable craving for offshore companies, as well as people and offices with an ambiguous reputation.