"Plane" for three: as Governor Vorobyov, God Nisanov and Dmitry Sablin agreed on the price

The families of the head of the Moscow region Andrei Vorobyov, the owner of "Kievskaya Square" God Nisanov and the deputy of the State Duma Dmitry Sablin divided the "clearing" near Moscow. It is unlikely that such an "alliance" will help strengthen the regional budget...

The group "Airplane," associated with the family of the Governor of the Moscow Region Andrei Vorobyov, will build in the region controlled by him almost 2 million square meters. m of low-rise housing. For this purpose, the developer's structure established two more subsidiaries - LLC Specialized Developer Airplane-Istra (SZ Airplane-Istra) and LLC Specialized Developer Airplane-Pushkino (SZ Airplane-Pushkino).

The partners of Avtolet in these projects are Savelyevo LLC, Muranovo-11B LLC and Semenovskoye LLC, affiliated with Rota-Development LLC, State Duma deputy Dmitry Sablin. In both of the developers' daughters created the other day, they own 50% of their shares. Approximately the same alignment was in the project, which the "Airplane" was implementing together with the Sablin structures in Dmitrov near Moscow.

The Moscow Post correspondent in the Moscow region understood the details of this story.

Deputy Sablin is a very prominent person. This is one of the richest members of the State Duma, whose last name appears in the mass of stories, stories, as is called with the "darling." 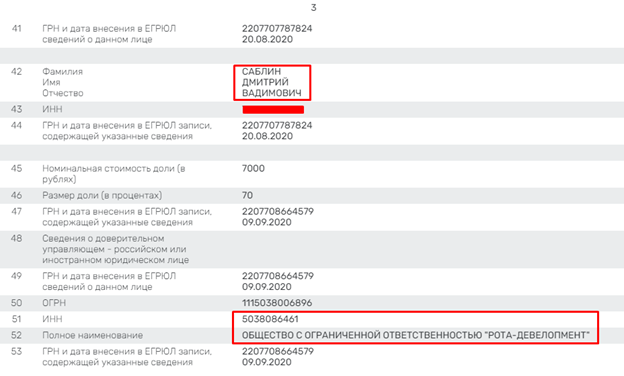 Sablin's shares are in trust with his own structures. The total revenue of all companies in which Sablin owned shares in 2018, according to Open Media estimates, exceeded 700 million rubles. Photo: https://www.rusprofile.ru

A detailed calculation of his activities was published by Versiya. Let's pay attention to some excerpts from this material.

In March 2020, the administration of the Leninsky city district of the Moscow region signed a contract for the purchase of 9 apartments for orphans. The contract was concluded with Sablin's company and as a result, nine apartments were purchased at a price of 4.3 million rubles for each. Given that the prices for apartments were lower on the developer's website, it is not difficult to suggest that the amount under the contract was overstated. Which is what the journalists did. 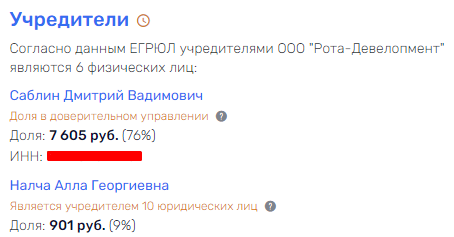 Part of the assets where Sablin has a stake is registered to his wife Alla Nalcha. She is listed as the founder of 18 structures. Photo: https://www.rusprofile.ru 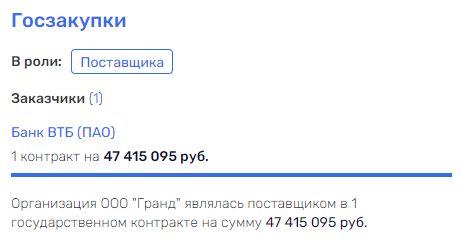 Some of them receive government contracts. Photo: https://www.rusprofile.ru

At the same time, Sablin is seriously fighting for his reputation. Due to investigations of his activities, he repeatedly sued the publications, and often won. True, as journalists write, "somehow in a partisan way": If you believe the same Metla, the publication was not notified of the lawsuit or the meetings, and the decision was made without taking into account the mass of factors that, perhaps, could persuade the servants of Themis in the other direction. 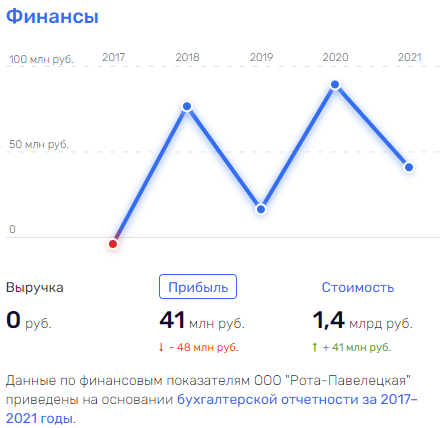 The financial performance of Sablin's firms also attracts attention. For example, the complete lack of revenue and multimillion-dollar profits and losses, sharply replacing each other at Rota-Paveletskaya LLC, indicate that the company can simply serve as a "money box" for withdrawing funds. Photo: https://www.rusprofile.ru 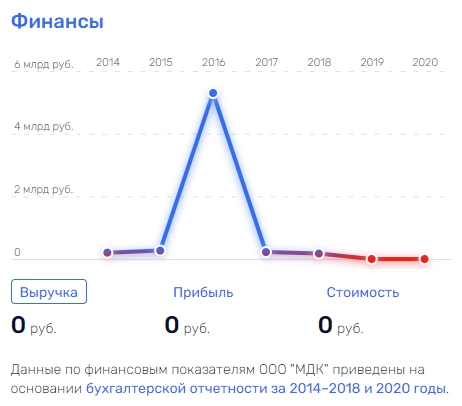 The legal predecessor of Rota-Paveletskaya was MDK, registered at Rota-Development. Where did 5 billion rubles of its revenue disappear from 2016 to 2017? They are not in the successor either. Photo: https://www.rusprofile.ru

Through ZhFK CSKA (women's football club) Sablin cooperates with Evgeny Giner. As The Moscow Post previously wrote, this entrepreneur can also be involved in the withdrawal of funds through the hotel acquired by his structures. Moreover, at one time the hotel was owned by structures close to the "authoritative" Aslan Usoyan, better known to the general public as "Grandfather Hassan." 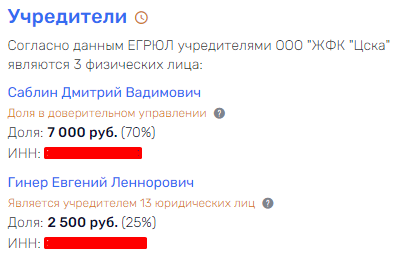 It is possible that Giner bought a hotel from people associated with the crime boss. Does this mean that he himself could be involved in the activities of the latter?

As they say, tell me who your partner is, and I will say who you are.

By the way, the organization "Combat Brotherhood," founded by Sablin with the aim of helping war veterans, was attributed to the affairs "with the darling." For example, as Vek wrote, "some" brothers "perfectly mastered the science of" protecting "entrepreneurs, others became involved in the art of" breaking up "commercial disputes. And the older "brothers" (that is, the leaders of the organization) plunged headlong into the fascinating process of redistributing the expensive land of the Moscow region.

By the way, as Novaya Gazeta (archival link) argued, "the Combat Brotherhood had complaints about Sablin, and more than once. In 2011, the head of the Sergiev Posad branch wrote an appeal to the President of the Russian Federation, in which he accused Sablin of beating an Afghan war veteran. The appeal said that the deputy allegedly "was in a state of severe alcoholic intoxication during the beating, flaunted the status of the deputy and membership in United Russia." But a criminal case was never opened. " 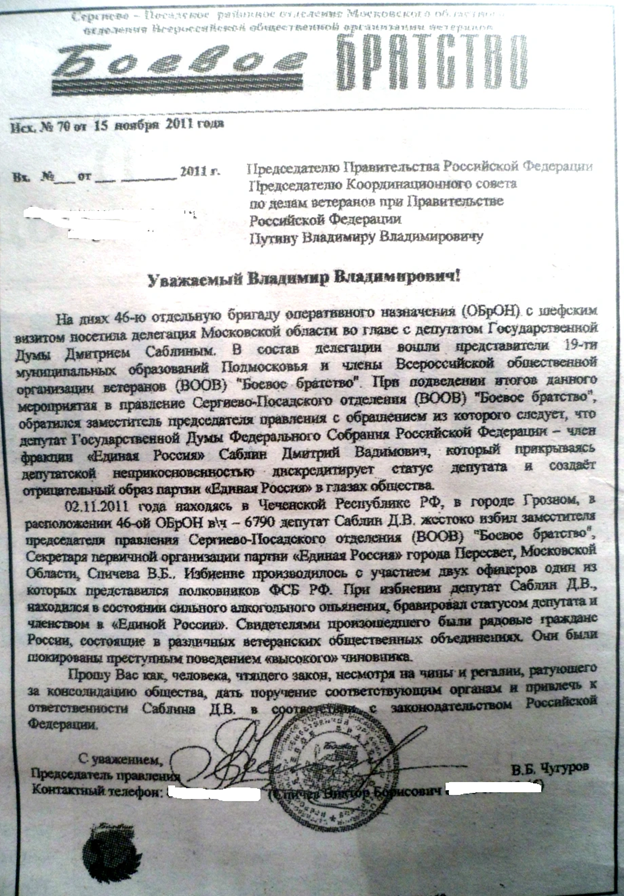 Appeal to Vladimir Putin with a request to bring Dmitry Sablin to justice for beating the veteran. Photo: Novaya Gazeta/ https://novayagazeta.ru/articles/2021/12/18/alliluiia-dmitrii-vadimovich-sablin-alliluiia

It is possible that those connections appeared here, thanks to which the "Airplane," affiliated with the brother of the Governor of the Moscow Region Maxim Vorobyov, met with the "kids" of the "Company." According to Forbes, about a year in 2014, Sablin and the owner of the RDI group Dmitry Aksyonov fell into the orbit of the then novice developer. On the lands of Sablin, Samolet built its largest project - Suburb Lesnoye for almost 2.5 million square meters. m of real estate.

And last year, at the PMEF-2021, Vorobyov signed an agreement with Alla Sablina (Nalcha) to create a production complex in the Leninsky urban district of the Moscow Region by 2023. 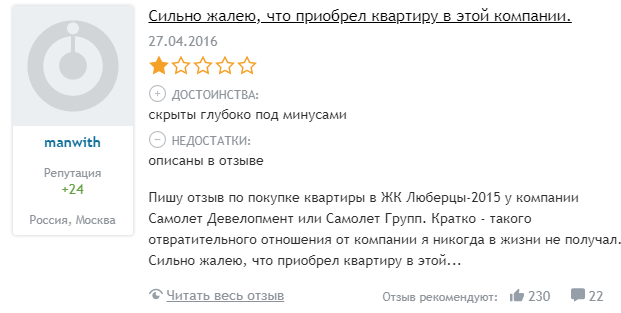 Reviews from homeowners eloquently speak about how the Airplane group is building. Photo: https://otzovik.com/reviews/kompaniya_samolet_development_russia_moscow/?ratio=1 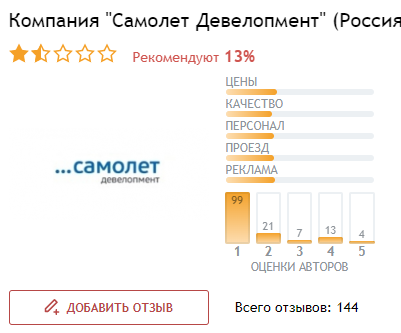 The secret of the wealth of the "Airplane"

The Samolet group has another partner, God Nisanov, who recently acquired 10% of the company.

As businessman Ilgar Hajiyev claimed in an interview with The Facts YouTube channel, Andrei Vorobyov's brother Maxim allegedly collected bribes from construction businessmen on his behalf. Moreover, the allegedly owner of the Kievskaya Ploshchad Group of Companies, God Nisanov, who offered entrepreneurs a "roof" for 6-12% of construction projects, helped in all this. The name of the head of the capital, Sergei Sobyanin, allegedly appears in this entire scheme. Now Nisanov is a co-owner of several "daughters" of "Airplane."

Ilgar Hajiyev talks about how the market of the capital and Moscow region real estate works. Video: YouTube

Meanwhile, behind the gubbernator Andrei Vorobyov, people may be lobbying for the interests of not only the construction, but even the funeral business. The Moscow Post spoke in detail about the possible connections of the Moscow Region governor with the Ritual State Budgetary Institution.

The God Nisanov is also a very curious person. It is not fully clear how he received his assets, including the infamous Food City shopping mall, famous for merchant strikes due to unreasonable rent increases.

Recently, a company affiliated with Nisanov received a monument of cultural heritage Konyushenny Dvor in the very heart of St. Petersburg at the auction. The Moscow Post covered the story in detail. Activists fear that there will be another bazaar. The other day, at the request of another bidder, the court has so far blocked the deal and prohibits the new owner from doing anything about the object. But no one knows how the story will end in the end.

If you believe the words of the same Hajiyev about the administrative resource of Nisanov, he may well "put pressure" where necessary in order to still fully take possession of the object.

Thus, in the current project of the "Airplane" interests can be traced, including Nisanov, together with Vorobyov and Sablin. All three have a highly controversial reputation. Very controversial results can be expected from their joint "creativity" - both for future residents of houses and for the state budget.

30 August, 8:55
PIK fell on Makeev: to whom "Motor" Andrei Kostin will hand over
See also