PIKovid problems of Sergei Gordeev, or bankruptcy not for nothing

The story of a covid hospital in Murmansk will bring oligarch Sergei Gordeev to prison?

PIK Corporation under the leadership of Sergei Gordeev massively gets rid of its subsidiaries. Is a developer going into controlled bankruptcy with state billions?

Former deputy head of the Ministry of Emergency Situations Andrei Gurovich was detained a month ago on suspicion of misuse of budget funds, Interfax reported. It was he who controlled the construction site and in 2020 reported to his boss Yevgeny Zinchev about his full readiness.

The facility at that time did not pass either the Rospotrebnadzor check or the procedure for signing acts of acceptance of work. As a result, the government of the Murmansk region, which began to operate the hospital, soon stopped doing this due to the fact that the building did not meet the climatic conditions of the region and design characteristics. At the same time, all funds allocated to pay for the contractor's services, after Gurovich's report, were transferred to the account of the contractor.

And a few months later, the contractor simply demolished the object, which did not accept a single patient. The amount of damage is estimated at 323.6 million rubles. In total, 1 billion rubles were allocated for the implementation of the project. This money could settle in the pockets of both Mr. Gurovich and the company that fulfilled the construction contract.

But that money - people with coronavirus and in need of immediate treatment, could not provide beds. The Murmansk region was one of the main foci of infection. And although Governor Andrei Chibis said that the region is on the list of the best to combat it, was it in fact?

The hospital, which never started working, could accommodate 700 people. But instead, some "lucky ones" were forced to lie in overcrowded hospitals. And some were completely without medical care.

At the same time, shortcomings were discovered at the stage of construction of the hospital. It was reported that the deputy governor Oksana Astakhova then received a letter signed by the head of the Ministry of Emergency Situations in the region, Ruslan Nazarov. The document states that the project provides for the construction of blocks, the fire safety of which is at a catastrophic level. In the event of a fire, the entire giant structure would be engulfed in smoke and fire. Not the best outcome for bedridden patients.

In addition, other violations were found - starting with the locations of the detectors and ending with banal sources of water supply. Ten days after the letter was written, the hospital was opened with fanfare.

In comments to journalists, Governor Chibis said that after discussing the above issues with the Ministry of Emergency Situations, "fears were removed." I would like to ask - why would it suddenly? And why didn't you then let people in for treatment, but make them wait in crowded corridors?

By the way, after the hospital was curtailed, Chibis said that it could be deployed again to solve new problems. That is, even then he did not admit failure.

And what is the second side of the bargaining chip that the hospital has become? Gurovich, and Chibis, could conclude a mutually beneficial agreement with the scandalous PIK construction corporation Sergei Gordeev. And for a reason. The contractor LLC GP-Transstroy is a structure affiliated to the developer. It was created in 2017 and in August of this year went into bankruptcy.

The only state contract was concluded with her with the capital construction department of the Murmansk region. Just to create an antique hospital.

Administration officials may also be involved? Moreover, given how construction ministers change almost annually, questions should be asked to someone higher. Maybe Governor Andrei Chibis will tell? Photo: rusprofile.ru

Apparently for this, the company's revenue was artificially raised from zero to 644 million rubles per year of contract conclusion, also sharply lowering it to zero in 2021.

If you analyze the activities of PIK Corporation, you can see that the company's subsidiaries quite often suffer a fate similar to what happened to GP-Transstroy.

In the last couple of months alone, at least five companies affiliated with PIK went into bankruptcy. Moreover, in some cases, their firms, also affiliated with the developer, went bankrupt.

Bankruptcy claims were received by Sergei Bogoslavsky and Yuzhnoye, who are engaged in real estate, which belongs to Consult Group JSC. Bogoslavsky, on the other hand, heads the Perspektiva company (part of Peak Corporation LLC), which is under liquidation. As for Yuzhny, the company belonged to PIK from 2017 to March 2022. 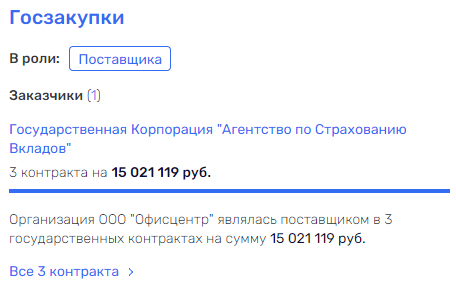 In this case, Tekhstroy LLC filed for bankruptcy, which is owned by Burves Project LLC. This company was previously the founder of Regional Construction Complex XXI Century LLC. Now the latter is controlled by PIK-Stroyinvest LLC.

Prior to this, the Moscow Arbitration Court declared Osp-Stroy bankrupt, which was previously also a subsidiary of PIK. By the way, Gordeev's corporation filed an application for inclusion in the register of creditors of the latter. And before that, a bankruptcy lawsuit against the company was brought by a certain "Karon" under the leadership of Irina Stologorova. She also headed the Prestige City company, managed by Mayak LLC, the founder of PIK-Comfort LLC.

In addition, the owner of the Karon company in 2021 was a certain K.O. It was the owner of several PIK subsidiaries, including PIK SZ LLC, which is in bankruptcy. 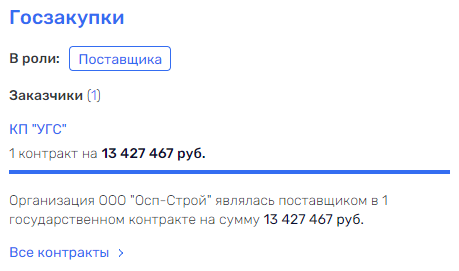 Osp-Stroy also has the only contract - with the Moscow capital construction department. And the revenue schedule is similar to that of GP-Transstroy. The company was created in 2016. Photo: rusprofile.ru

In early June, two more companies affiliated with the main Moscow developer filed for bankruptcy. We are talking about Delis-Invest and Retail Standard-Pyatigorsk. Until the spring of 2021, they belonged to PIK-Investproekt. 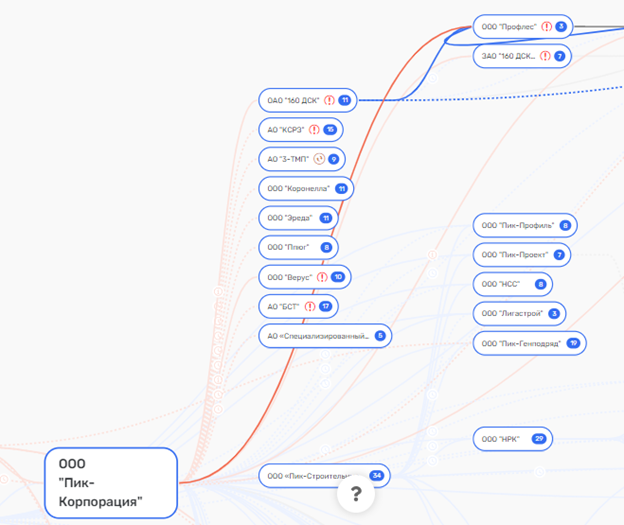 Here's what PIK's link tree looks like. Are too many companies curtailed? Photo: rusprofile.ru

Somehow all this is very much like a controlled folding of a corporation. Did Gordeev gather behind the hillock?

But there are many reasons. The developer is known for regularly delaying the deadlines for the delivery of houses, and their quality often causes complaints from buyers. In 2018, Rostekhnadzor revealed 30 violations in the PIK house under construction - RostovGazeta reported this.

Suppliers of the group of companies also have complaints. In 2019, PIK-Comfort owed Mosenergosbyt 128 million rubles. Last year, the governor of the Moscow region, Andrei Vorobyov, directly stated that the management organization PIK-Comfort should leave the region, Forbes reported. And in September 2020, PIK-Comfort hardly avoided bankruptcy.

In October 2021, the federal TV channel REN TV released a video that tells, among other things, that the developer has found signs of a financial pyramid. Is PIK essentially a dummy?

Against the background of all these unfavorable stories around the developer, Gordeev, even logically, is the time to turn his pyramid and look towards Western states or Israel, where many businessmen and politicians left Russia, including with an ambiguous reputation in their homeland.

True, then thousands of citizens who have invested in PIK projects will be left without housing, many of whom are still under construction.