PIK "shame" Gordeev: is the developer waiting for a pre-investigation check?

Moscow has become another region where patience with the PIK developer and its owner Sergei Gordeev has reached its limit. Unspecified kindergartens, apartments that are not provided under government contracts to employees of the Ministry of Emergency Situations and the FSB, as well as the failure of the construction of a "covid" hospital, may serve as a reason for initiating criminal cases.

Moscow Mayor Sergei Sobyanin criticized the PIK developer, saying that Moscow would break off cooperation with him if he continued to disrupt the construction time, according to The Moscow Post.

This happened during his visit to the Lublin Park residential complex, where, we quote: PIK has already handed over 200 thousand square meters. m of housing, while the kindergarten still does not work, the school has not been introduced. "

It seems that this is a bell for Sergei Gordeev, the main shareholder of the company, who literally recently transferred the position of head of the corporation to its top manager Ivan Polyntsev.

"If this practice continues, you will not build in Moscow," the head of the city said. Video: YouTube

A lot of questions have accumulated for the developer over the years of his work. Recall that The Moscow Post recently talked about the fact that a group of companies has not been able to rent housing to employees of the Ministry of Emergency Situations and the FSB in long-built houses for a decade.

By the way, where Gordeev himself is unknown. They say that he is abroad, out of the reach of law enforcement agencies.

Meanwhile, "Lublin Park" is not the only place where the Gordeevsky PIK has problems with the commissioning of kindergartens.

So in the project "Mitinsky Forest" the kindergarten generally disappeared from the general plan. 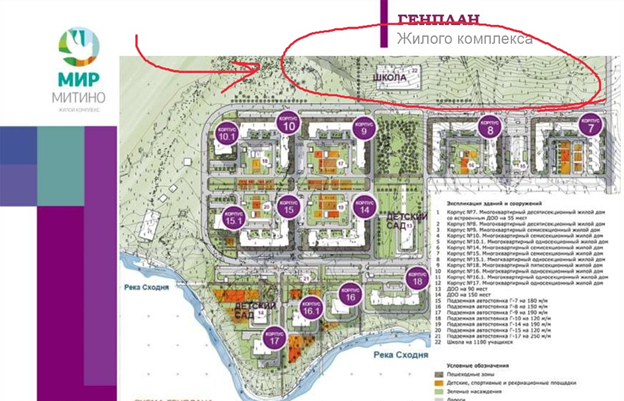 The kindergarten disappeared from the general plan altogether. Photo: https://t.me/propertyinsider 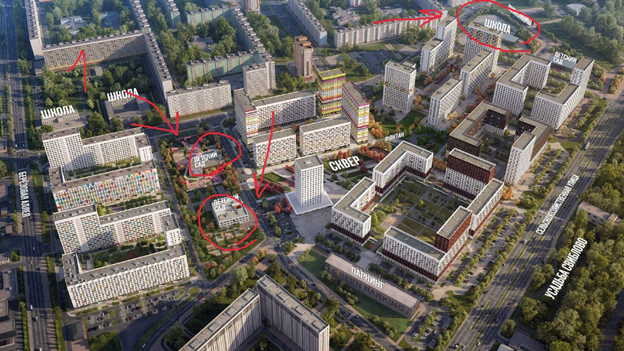 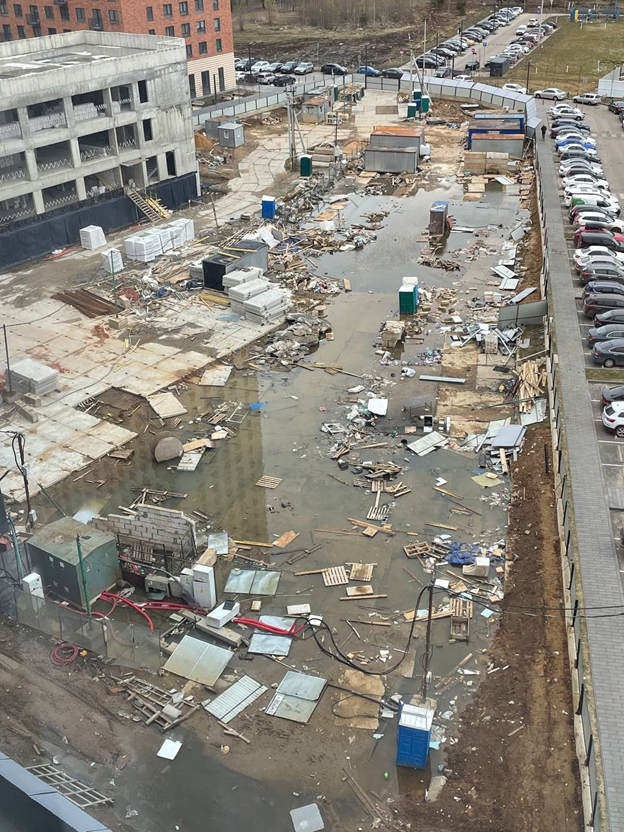 "Passed 1 kindergarten. It is private, the budget is "Moscow" - 80 + per month. The second kindergarten froze in concrete, although it should be commissioned in 2 sq. 2023. "Photo: https://t.me/propertyinsider 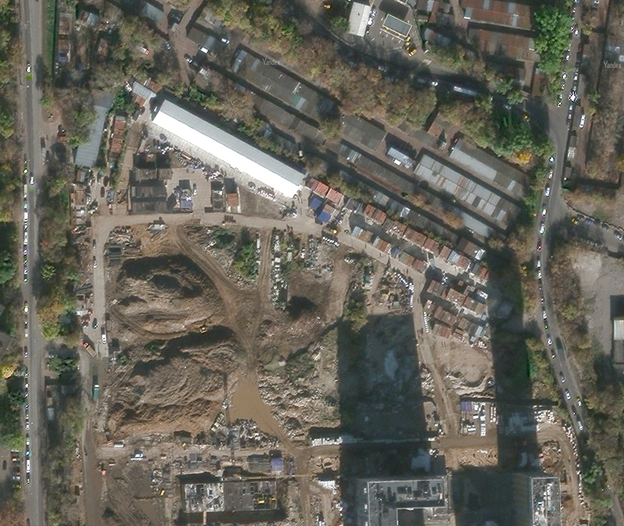 "At school (passing 4 sq. 2024), the horse did not lie around at all. Although, the project is finalized. There is one building left with delivery in early 2024. " Photo: https://t.me/propertyinsider

If educational institutions are still completed, the question is whether they will be given to the city free of charge, as expected by law, or the developer will demand money from Moscow to buy them out. This situation, for example, is normal in Ugra, where Natalya Komarova buys social objects from Nikolai Storozhuk.

The Moscow Post in the author's video spoke in detail about what is happening at PIK construction sites.

Details of possible violations of PIK

Peak is asked "to exit"

Regarding PIK, there are questions about what people get at the exit. It is enough to recall the story from the residential complex "Lyubertsy Park," where equity holders were promised multi-level parking, but then simply did not build it. As a result, residents of high-rise buildings have to park on an unequipped area for this, and every winter, with their own money, call tractors to clear this area of ​ ​ snow.

In addition, complaints from equity holders go to the "cardboard walls," and to numerous violations during the construction, and to the disgusting maintenance of houses. The latter, by the way, is most often engaged in PIK-Comfort - the same organization that the Governor of the Moscow Region Andrei Vorobyov ordered to be expelled from the region in 2021. And the one that almost went into bankruptcy, and now survives somehow due to the fact that it was also stationed in St. Petersburg. 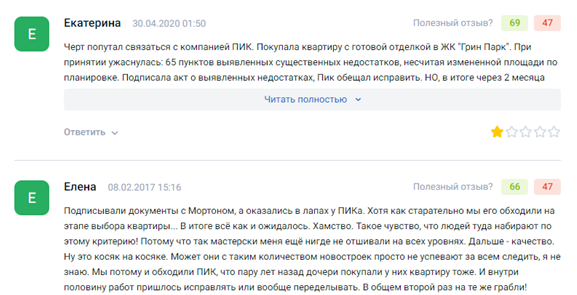 The record low rating on sites with reviews provides a huge number of dissatisfied people who have invested in apartments from PIK. In 2017, PIK bought the developer Morton. So people who diligently bypassed PIK because of the disgusting quality of housing construction got into the same networks. Фото: https://novostroev.ru/zastroyshchiki/gruppa-kompaniy-pik/otzyvy/

Apparently, PIK always did not care about people. Once she even began to demolish the house in which people were at that moment. And they were not just there, but they lived there.

And in 2019, PIK knocked out a building permit for the Salaryevo Park residential complex 100 places from the landfill. Which, although he promised to liquidate, he did nothing. The protests of residents did not move the situation off the ground one iota.

Apparently, the developer does not care about the environment. Only petitions and the activity of local residents stop the company's destruction of park areas, as it was, for example, in the Dmitrovsky district, where, after the purchase of the territory by PIK, the Veteran Park and the former military hospital were threatened with demolition.

But even the anger of the people does not always work. Another petition demanded to stop the development of the Myakinsky floodplain.

Gurovich left a place for Gordeev?

Among other things, the developer risks becoming a defendant in a criminal scandal related to the construction of an antique hospital in the Murmansk region, which has not received more than one patient. It was impossible to exploit it due to violations committed during the construction, and as a result, the colossal project was simply demolished, spending hundreds of budget millions on it. The damage is estimated at 300 million rubles. The construction was carried out by the structure of PIK GP-Transstroy. Former Deputy Minister of Emergencies Andrei Gurovich is already under investigation in this case. 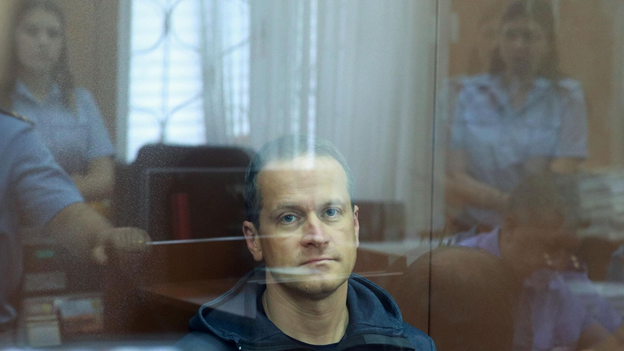 PIK structures have recently gone into bankruptcy en masse. The corporation's debts amount to tens of billions of rubles. There is reason to believe that the company will eventually simply "collapse." Especially taking into account the fact that back in 2021, the developer found signs of a financial pyramid.

How Sergei Sobyanin "poured" the developer of Moscow lands for so long is known to God alone. Although according to rumors, he has mutually beneficial relations with Gordeev. But in the current situation, it is no longer possible to continue to turn a blind eye to everything that PIK does.