PIK fell on Makeev: to whom "Motor" Andrei Kostin will hand over

Sergey Gordeev and Vladislav Sviblov in anticipation of the "Russian roulette" from Andrei Kostin. "Merged" once Roscosmos KB "Motor" haunts businessmen. And what does Inteko and God Nisanov have to do with it.

The land of Roscosmos at 7 Sergei Makeev Street may go to PIK structures. The God Nisanov can also compete for the asset. VTB head Andrei Kostin continues to look for benefits?

The story with "SZ Makeev" belonging to "Donstroy" continues to become scandals. It got to the point that the ex-head of Roscosmos Dmitry Rogozin was "wooed" there, with whose blessing a "tidbit" of the territory of the strategic enterprise KB Motor in Moscow on the street. Sergey Makeev d.7

From Roscosmos to the hands of businessmen from Rogozin with love

At the beginning of 2021, stunning news thundered throughout the country - it turned out that the Motor Design Bureau could quietly sell the land under the asset of the Center for the Operation of Ground Space Infrastructure Facilities of Roscosmos (TsENKI) to Donstroy.

The Moscow Post unearthed that a subsidiary of Donstroy SZ Makeevka was registered at the same address as Motor (Moscow, 7 Sergei Makeev St.).

Having driven the address into the search engine, it was easy to find pages on which a sale of apartments had already been organized for a certain residential complex on Makeev. That is, the car spun to the fullest. State land, consider, has already gone into private hands - in an unknown way. 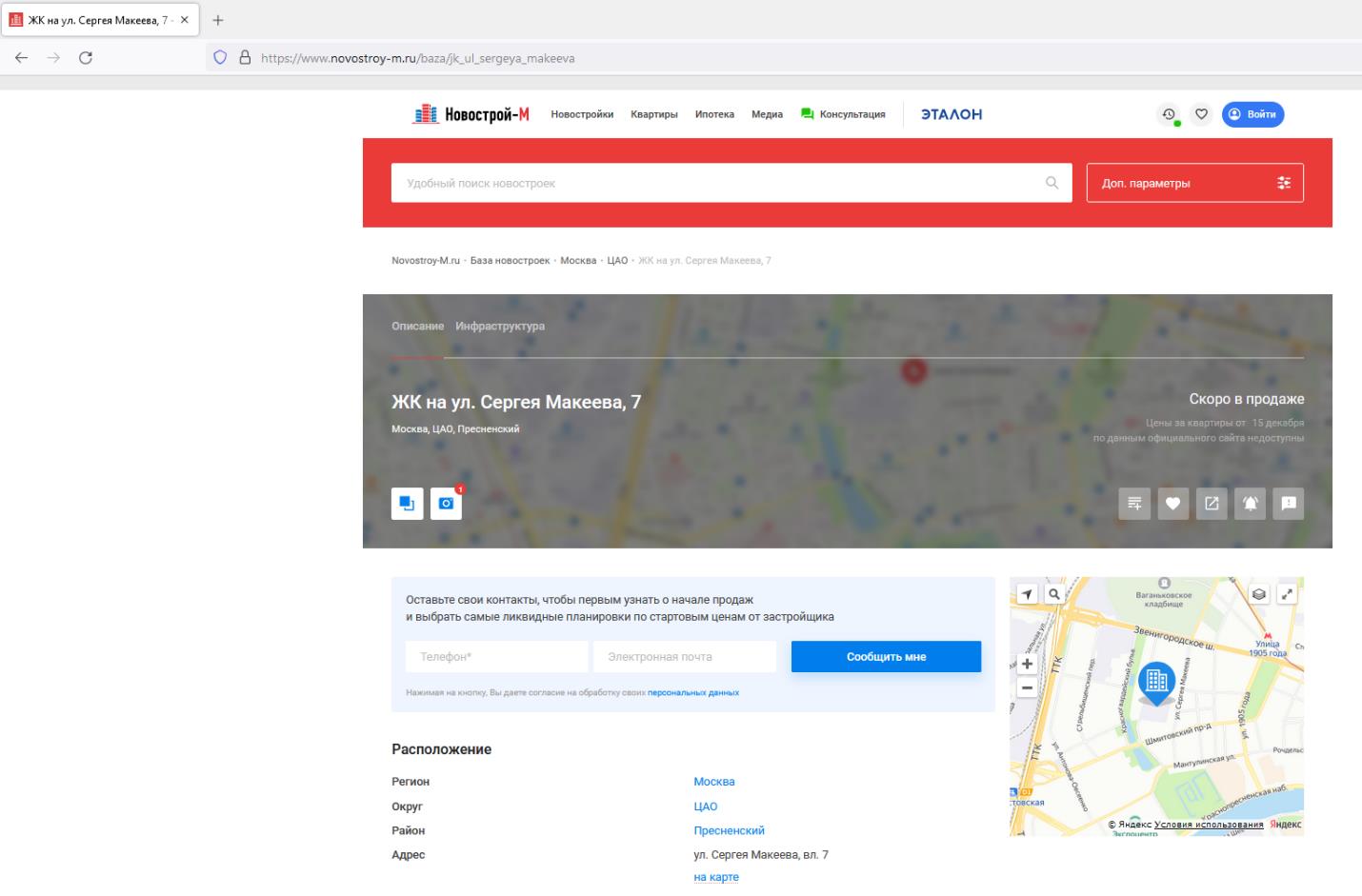 Remote page with data on the sale of apartments in the residential complex on Makeevka. Photo: Archive of The Moscow Post

As soon as The Moscow Post published the information, the shop was hastily curtailed. The pages on the Internet were deleted, and SZ Makeevka re-registered to the basement on Mosfilmovskaya Street 70 and erased all the data on the previous registration address. 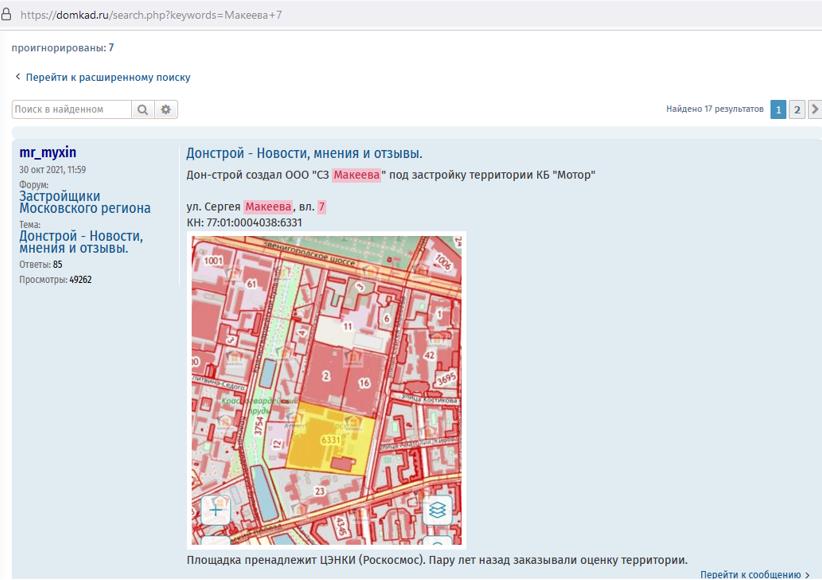 A little later, the head of TsENKI Andrei Okhlopkov was fired. Rogozin announced that allegedly for embezzlement on contracts for cleaning up space debris. Interfax wrote about this. Or maybe Okhlopkov just knew a lot?

Whether Rogozin had a personal interest in this operation, and with whose blessing it was carried out is unknown. But if it smells fried, then Dmitry Olegovich will have to answer.

Back in 2017, Donstroy itself was called on the verge of bankruptcy, although after some time the publication posted such data, thoroughly cleaned up the text, removing the lines about the crisis-unstable situation of the company - Vedomosti reported.

Moreover, everything is aware of the terrible quality of houses (people complain about leaking windows, problems with rats, in 2017 a woman died in the Scarlet Sails residential complex due to the fall of the elevator - the Lenta.ru wrote about this), and scandals with the discharge of waste into the Moscow River near the Donstroevsky residential complex "Heart of the Capital," and nevertheless the company is still afloat.

Theoretical Rogozin can, as no longer related to state obligations, represent the interests of the owner of the Kievskaya Ploshchad Group of Companies, God Nisanov.

As previously reported by The Moscow Post, Rogozin's son in 2019 was appointed general director of the company that is developing the Nagatinskaya transport hub in Moscow. The implementation of this project is engaged in the Kievskaya Ploshchad Group of Companies. Connections, as they say, have been established.

Ubiquitous Kostin and his friends

As for Kostin's interest, he is potentially discovered for several reasons. Firstly, in 2010, Alena Deryabina, former vice president of VTB Bank, became the director of the affiliated company Donstroy Invest. Face, Kostin is hardly unfamiliar. Secondly, the official website of the company states that VTB is its partner. That is, the state (!) Bank invests money in the development of the company. Is Kostin not aware of her deplorable state? Why would he keep funding something he can't save anymore?

According to rumors, the head of Donstroy is actually a longtime friend of VTB Deputy Chairman Andrei Puchkov, who is Andrei Kostin's "right hand," billionaire Roman Gromozdov. His surname is associated with the Rotenberg family, with whom Gromozdov allegedly has joint commercial projects, and with the head of Rosneft Igor Sechin.

There is such a company - "KL Development." This structure went from Donstroy to other firms and back several times. The last time the owner of the company changed at the end of December last year - it became LLC SZ "Finstroy and Partners Department." It, in turn, is owned by SZ Otdelfinstroy LLC and SZ KSK Group JSC. The holder of the shareholder register of the latter is REGISTER-RN LLC, a one hundred percent office of Rosneft.

And finally - "KL-Invest." One of the co-owners is Arkady Ilyaguev, a former member of the board of directors of the Moscow Hammer and Sickle Metallurgical Plant, whose shareholders included the Bank of Moscow, whose accession to VTB ended in May 2016.

In 2017, KL-Invest received the rights to manage the Moscow Real Estate fund. And he, in turn, held at that time the shares of three firms (Perspektiva CJSC, Invest-asset CJSC and FinanceProject CJSC), which, according to Vedomosti, jointly own 100% of Don-Stroy Invest CJSC.

At one time, a certain "Stroyinvestgroup" was registered on Ilguev. In 2019, its revenue rose sharply to 15 billion rubles from scratch, the next year also fell sharply to zero. It looks like a box for "laundering" funds. Aren't they donstroevsky? 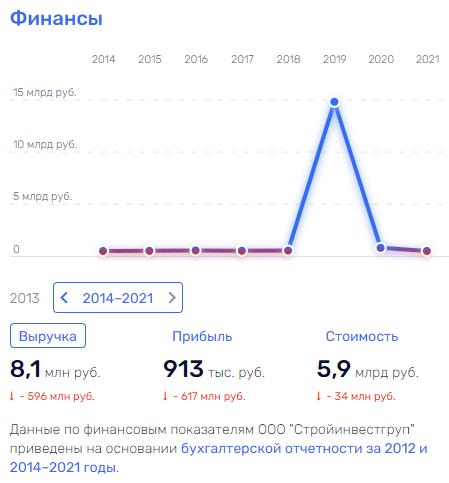 Ilguev at one time kept both KL-Development, mentioned above, and Fresh LLC, which is now managed by Donstroy under the encumbrance of VTB. The structure of Fresh also included the offshore company FAVENTA HOLDING LIMITED. Here is where the Donstroy money "saved" on the quality of construction can flow.

Obviously, if Rogozin heads Donstroy, the head of VTB will not be on the ticket. Only after all, Rogozin can sit down in history with KB Motor, and this is already a reason for Kostin to strain himself.

At the same time, interest in the land under KB "Motor," according to a number of unofficial sources, allegedly showed the structure of the corporation "PIK" Sergey Gordeev. Also, as reported by The Moscow Post, a company potentially close to bankruptcy. It is known that its shares are in the portfolio of VTB Bank. And again Kostin.

In 2019, the state bank tripled its stake in PIK. Explaining this by the fact that he wants to control the development projects funded by him. PIK is on the verge of bankruptcy - it seems that Kostin has a gift to choose "reliable" developers. Most likely, PIK is still not bankrupt precisely because Kostin's personal money may be in the developer. Then it is beneficial for him not to let go of the site.

There is reason to believe that the land under KB Motor will still see a new owner, which will not be the structure of Roscosmos, and not even Donstroy, which has already been disgraced in this situation, but possibly by PIK Corporation.

The company "SZ Sergey Makeev" is registered on Makeev, which belongs to "SZ Vip-Stroy." The latter is controlled by Inteko JSC. At one time, the Aircraft Group of Companies wanted to buy this company, which is affiliated with the family of the Moscow Region governor Andrei Vorobyov and where not so long ago it acquired the share of the God Nisanov already mentioned in conjunction with Rogozin.

Interesting things are beginning to emerge. Rogozin is "friends" with Nisanov, Nisanov bought a stake in a company that wanted to acquire Inteko, and therefore SZ Sergei Makeev. Does this mean that the territory of the design bureau can eventually fall into the hands of the oligarch?

But Kostin potentially has his own interest in both Donstroy and PIK. It turns out that the head of the state bank can remain the beneficiary.

But even here not everything is so prosaic. It is worth recalling Vladislav Sviblova, who, together with Gordeev, worked at Rosbuilding (against whose shareholders more than a decade ago criminal cases of a raider seizure were initiated - RBC wrote). The partners worked together and after. Sviblov's personality is closely associated with Mr. Gordeev. Consequently, do merchants divide all attributed sins in half?

For example: in December 2017, the media wrote that the then member of the board of PIK Group Vladislav Sviblov, together with partner Alexei Kovalchuk, deceived hundreds of investors who hoped to buy loft apartments in the north of Moscow. This was reported by Lenta.ru. This is not to mention the fact that from the point of view of the quality of construction, PIK can compete with Donstroy itself.

But let's return to VTB and how Kostin can be associated with Sviblov. When the latter ruled very unprofitable at that time LLC Talinskoye, the share of the founder of the company was pledged by VTB.

At the same time, the Ozgrk company associated with Sviblov and Tainsky (also, by the way, unprofitable) was at one time the founder of Investevrokompany LLC, which was registered for two offshore companies. Is Sviblov another link in VTB's money withdrawal chain?

It's too late to retreat, and I don't want to lose a tidbit that will help you make good money on elite housing.