PIK does not pull the responsibility of Gordeev

The head of PIK, who left his posts, can leave Russia?

The main shareholder of PIK Group, Sergei Gordeev, resigned as head of the construction corporation, and was replaced by top manager Ivan Polanov. The media report that Gordeev may become the head of the company's board of directors.

In fact, the picture is by no means so rosy: the PIK company is in not very good financial condition.

Recently, structures related to PIK have been bankrupt in large numbers.

It can be seen that Gordeev began to "turn the bench" a few months ago. The Moscow Post spoke in detail about these facts in the PIKovaya load investigation. "

Many believe that the developer has found signs of a financial pyramid.

To this last day, a potentially striking criminal case was added related to the construction of an antique hospital in the Murmansk region for 1 billion rubles, which did not receive a single patient.

Recall that this summer, on suspicion of misuse of budget funds on this project, Deputy Minister of Emergency Situations Andrei Gurovich was detained - Interfax reported.

It is known that the construction of the scandalous tent, which, due to numerous violations, was never put into operation, was carried out by a structure whose ultimate beneficiary is PIK - GP-Transstroy LLC.

It was created in 2017, then it was possibly artificially "pumped up" 644 million rubles and by 2021 taken to zero. Already in August of this year went into bankruptcy. Most likely, they joined the state millions together with Mr. Gurovich. The Moscow Post described in detail the current situation in the investigation "PIKovid problems of Sergei Gordeev."

When will officers get the flats?

At the same time, the Gordeevskaya structure sits tightly on the field of state orders - among the clients of the Ministry of Emergency Situations, the Office of the Governor of the Moscow Region, the FSB, the institutions of the Russian Guard and a lot of other departments of the country.

Big doubts that they would be fulfilled began to creep in a few years ago. The head structure of PIK SZ has received six contracts during its existence - five of them are at the execution stage. The Ministry of Emergency Situations cannot wait for the construction of houses at the address: Moscow, ul. Reserve, vl.14-16, building 5, building 6 since 2010. Energy "MOEK," "Energoservice" and "MSK Energo," it seems, will remain without purchased equipment.

Interestingly, this situation seems to suit customers - the same Energoservice ordered power grid facilities from another developer structure, PIK-Industry, in 2017, and has not yet received them. 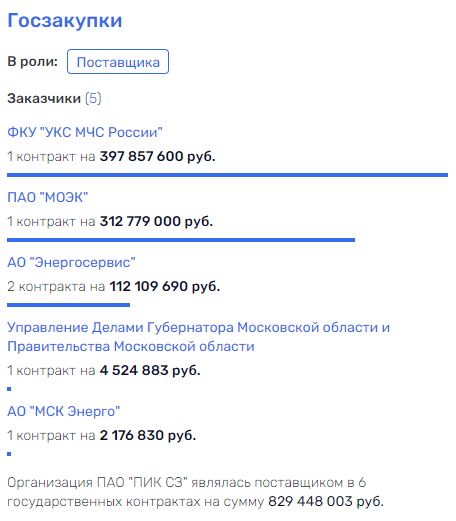 In 2010, PIK-Region taught the FSB government orders a total of almost 1.2 billion rubles. for 231 apartments. Judging by the open sources of state orders at the moment have not been fulfilled. 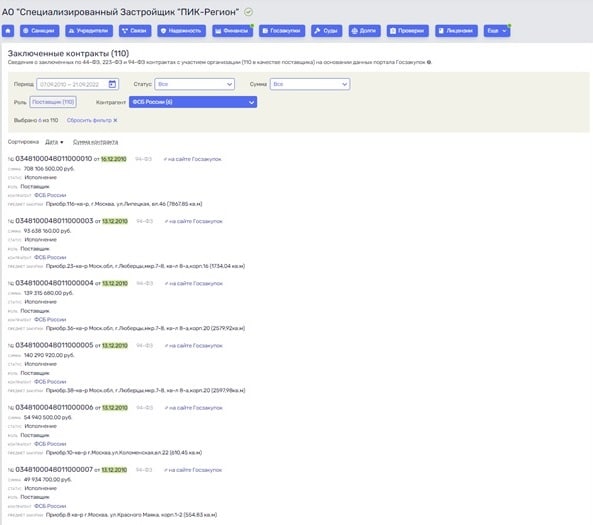 Since 2010, 231 families of FSB officers have been waiting for their apartments. Photo: https://www.rusprofile.ru

Since 2016, KSK LLC has not been able to supply reinforced concrete products to the Main Directorate for the Arrangement of Troops. This institution supplies the Ministry of Defense, belongs to the military-industrial complex, is strategically important. 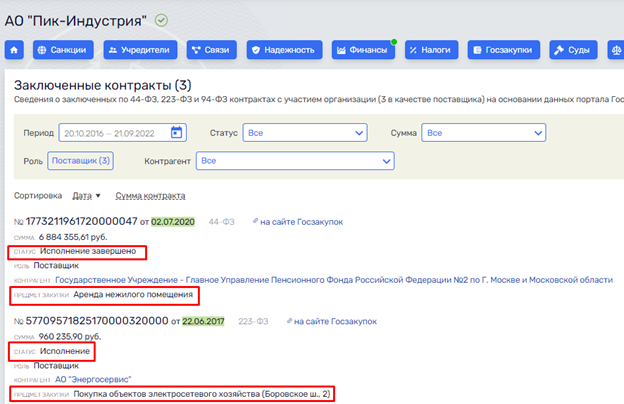 Of the entire heap of contracts, only those that relate to the rental of premises and the sale of apartments at potentially inflated prices by institutions of city and district administrations are regularly carried out. Photo: https://www.rusprofile.ru

Who is the "shish" without oil?

Many companies from the PIK orbit are related to offshore companies, where it is possible to withdraw state billions "earned" on government contracts. 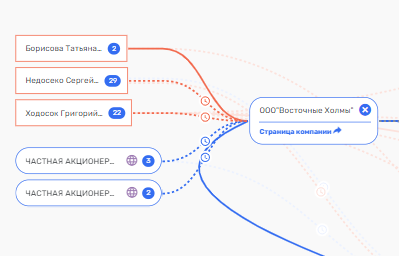 Three operating companies are registered for Mr. Gordeev himself. One of them - "Paveletskaya Ploshchad" at different times belonged to two different offshore companies - "FUND KHREF" and "PAVMOLL LTD." Now the head of the office is Mall Management Group, tied to the foreign company PLAZA BI.VI. Gordeev's share in Paveletskaya Square is encumbered by VTB Bank. Revenue in the company, according to Rusprofile, has not been there for a long time.

If everything goes according to a scenario that has been promoting in PIK for a long time, not only the state, but also equity holders of residential complexes will suffer from the bankruptcy of the developer. PIK, according to media reports, is the largest developer in Russia. Now in Moscow alone, he and his "daughters" have at least a dozen residential complexes at the construction stage. If the whole "pyramid" collapses, thousands of people will be left without a roof over their heads.

This is despite the fact that apartments from PIK are often unreasonably expensive, despite the heap of complaints about their quality. In 2018, Rostekhnadzor revealed 30 violations in the PIK building under construction.

In 2018, a big scandal arose in connection with the cutting down of the park under the windows of residents of Ivan Franko Street in Moscow. As Newsnn.ru wrote.

In addition, PIK received the right to demolish more than 30 houses in Kuntsevo, of which not all were declared emergency. The court to which the citizens appealed did not side with them. And PIK demolished the houses, in one of them, as Newsnn.ru wrote: "In July 2021, residents of houses nearby to the future skyscraper reported that unknown persons fired at their windows. According to Muscovites, the PIK group may be involved in this, at that time there were people. "

All this incredible number of scandals for a long time broke down into the silence of law enforcement agencies. The developer continued to receive fat areas from the government, mainly Moscow, which may indicate the veracity of the assumptions of spiteful critics about the contact established by Gordeev with Mayor Sergei Sobyanin.

Maybe it became difficult for Gordeev to pull such a burden of responsibility, hence the talk that he could leave? Then the main question is who will rake everything that the developer screwed up?