Could the oligarch-debtor Konstantin Strukov save the Petropavlovsk Group of Companies, or did he save only his own pockets?

Minority shareholders of the gold mining group Petropavlovsk, which was on the verge of bankruptcy, are afraid of losing their money and are preparing complaints to the Central Bank and law enforcement agencies. Such messages are distributed over a network where shareholders set up support groups to coordinate joint actions.

Meanwhile, the GC itself is unlikely to save anything. It was brought to bankruptcy by Western sanctions multiplied by the managerial "talents" of the last leadership team (before the introduction of external management) - namely the team of the Chelyabinsk billionaire, vice speaker of the Legislative Assembly of the region Konstantin Strukov, in whose hands was almost a third of Petropavlovsk.

About the sad fate of one of the largest gold mining companies in Russia - in the material of the correspondent of The Moscow Post.

One of the largest gold mining companies in Russia, Petropavlovsk PLC, was on the verge of bankruptcy: in mid-July, trading in its shares was stopped, a few days later it introduced external management. The company is awaiting bankruptcy, and its shareholders fear that they will remain out of pocket.

They prepared an appeal to the President of Russia with a request to protect their rights. The share of minority shareholders in Petropavlovsk is about 40% of the shares, and the structure itself, although registered in the UK, is in fact Russian, its assets are located in our country. And if the gold miner ceases to operate, Russian citizens will be left without work.

The president will surely assess the situation, but should the same minority shareholders ask a question to the Chelyabinsk oligarch Konstantin Strukov, who owns 29.19% of the structure? After all, he and his management team entered the capital long before the introduction of new "draconian" sanctions against Gazprombank - this is how Petropavlovsk lost the opportunity to pay on loans and drowned in debts.

The main creditor of the company is Gazprombank: he issued a loan to the structure for $200 million and opened a credit line for subsidiaries of Petropavlovsk for $86.7 million. Under the terms of these obligations, GPB bought 100% of Petropavlovsk gold.

In March, when the bank fell under British sanctions (Petropavlovsk PLC, we recall, registered in the UK), the gold miner lost the opportunity not only to sell metal to the bank, but also to make loan payments. The company had a loan of $200 million in GPB and a credit line was opened for the gold miner's subsidiaries for $86.7 million.

After that, the famous Russian oligarchs-industrialists Iskander Makhmudov and Andrei Bokarev entered the game: their UMMC bought the rights to claim the Petropavlovsk loan for $201 million. Another $86.7 million in debt claims were transferred to Nordic. 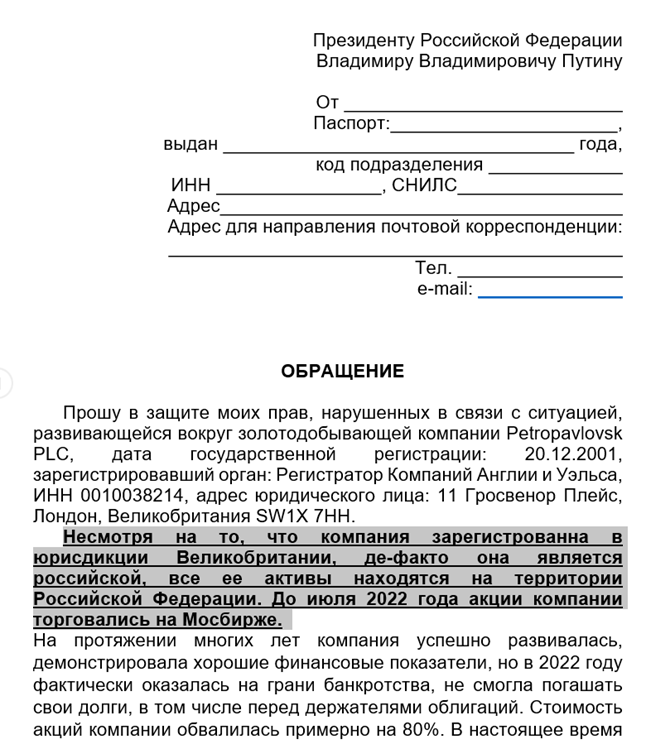 Minority shareholders of Petropavlovsk ask the President to protect their rights. Photo: https://t.me/petropavlovsk_banrot

But the GC itself would not have been able to squeeze out under sanctions in any case. And on July 12, 2022, Petropavlovsk launched an insolvency procedure.

The question arose about the division of liquid assets from the sinking group. Strukov, Bokarev and Makhmudov took up this division. But we are talking not only about real estate and equipment, these are also licenses for the development of minerals - gold veins in the literal sense of the word.

Already on July 14, 2022, UMMC (the main creditor) and Konstantin Strukov (the main majority shareholder) filed applications for the purchase of the assets of Petropavlovsk Group of Companies they need. "Kommersant" wrote about this.

Bet did not play

But if the beneficiaries of UMMC Bokarev and Makhmudov probably have money to buy back part of the assets for their mining industries, then a reasonable question arises for Strukov. And where will he get the money from, given the colossal debts of his business and the questions of the Federal Tax Service directed to him?

Unless Mr. Strukov expects to receive Petropavlovsk's liquid property at a bargain price, and the likelihood of this is high.

Recall how Strukov ended up in the capital of Petropavlovsk. At first, another scandalous oligarch Roman Trotsenko acquired a share in 22.7% of the structure, after which he almost immediately sold it to Yuzhuralzoloto Group of Companies (SGC) Strukov.

There were rumors that the owners, including the company's management and its founder Pavel Maslovsky, simply did not want to sell part of the shares directly to the latter. But Trotsenko could help Strukov out of great friendship.

Soon, SGC Strukova became the owner of convertible bonds Petropavlovsk by another 5.97%, turning into the largest shareholder. After that, a corporate conflict occurred within the company, as a result of which one of the main shareholders of the structure Pavel Maslovsky and directors loyal to him retired.

It is difficult to assess Strukov's role in this situation - after all, Petropavlovsk had debts even before him, but he could not influence the sanctions. But the departure of Maslovsky and the old team clearly did not affect the asset for the benefit - Petropavlovsk sank in debt and will now go under the hammer in parts.

As a result, Strukov received serious problems already through his main asset - the Chelyabinsk Yuzhuralzoloto group. At the end of 2021, with a considerable revenue of almost 30 billion rubles, JSC YUGK brought a loss of 8.4 billion rubles. The value of the company's assets almost halved - from 28 to 15 billion rubles. 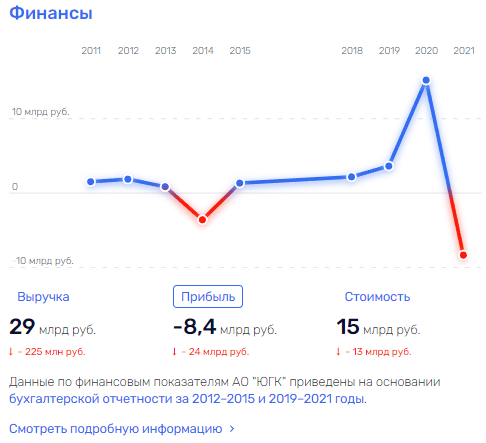 The fall is partly due to a sevenfold decline in the price of Petropavlovsk shares, in which UGK invested. Since June 15, the company has ceased to trade on the Moscow Exchange. But, this does not explain other debts and scandals in the Strukov empire.

For example, a series of UGK proceedings with the ISS engineering company, which tried to seize tens of millions of rubles from Strukov's company through the courts. Allegedly, SGC Strukova simply did not list the full calculation for the work performed by the ISS.

The oligarch's asset was threatened with bankruptcy and billions of dollars in losses. And the sword of Damocles still hangs over Strukov's business. After all, a separate problem is the claims of the Federal Tax Service to its coal enterprises. And then the industrialist suffers defeat after defeat.

In May of this year, coal assets close to his family in Chelyabinsk could not block large claims for payments to the state budget. MELTEK, one of the beneficiaries of which is the businessman's daughter Yevgeny Kuznetsova, lost to the FTS court on claims worth hundreds of millions of rubles.

I could not achieve interim measures on the dispute with the tax and Energia-NK, which had previously been presented with claims for almost a billion rubles. At the same time, the tax service continues to seek funds from Konstantin Strukov himself and related assets in the bankruptcy case of the Dzerzhinsky Mine.

In addition, in April 2022, the prosecutor's office suddenly found foreign assets from the Chelyabinsk billionaire deputy - property in Montenegro worth 55 million euros, which for some reason was not in the official declaration. 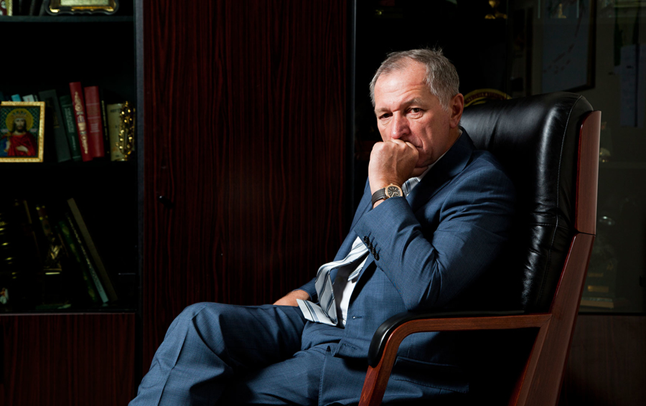 How Konstantin Strukov intends to deal with the problems of his business is decidedly unclear. Photo: gztslovo.ru

According to "Pravda Ural Federal District", the checks included documents for the Hotel Dubra Luka 5 *, 2 mansions, as well as two yachts. Apparently, all this should have escaped the attention of tax inspectors.

Isn't Strukov going to leave Russia from debts and other problems? If so, then minority shareholders and creditors of Petropavlovsk will definitely not wait for their money.

09 January, 7:50
Skurov's path to Cyprus lies through the investigation

03 June, 8:24
Well, a very enriching plant: who entered the battle for the Kimkano-Sutar GOK and its state money
See also