Panchenko will "master" Lamoda for "Sberbank"?

Yakov Panchenko bought Lamoda, in order to then sell Sber for a penny, and provide himself with loans for related projects?

Foreign business continues to leave Russia, which is used by local players. One of the latest deals: the sale of online retailer Lamoda by a Singapore investor. The buyer was the owner of the Stockmann department stores, Yakov Panchenko, whose family is believed to be supported by the Kovalchuk brothers.

Lamoda is an online platform that operates in Russia and the CIS and specializes in the sale of clothes and shoes. The company was founded in 2011, from 2014 to 2022 it was part of the Global Fashion Group. Stockmann is a chain of department stores that also work in the fashion segment, so for Panchenko this is quite a profile asset.

Yakov Panchenko claims that the entire former Lamoda team will remain in place and continue to work. But this is the standard statement of the new owner on such transactions. Meanwhile, it is not completely clear where Mr. Panchenko took the money to purchase the asset - the correspondent of The Moscow Post understood the situation.

According to RBC, its cost amounted to 95 million euros minus operating costs. It is clear that this is a price with a large discount - the former owner of the Global Fashion Group (GFG) leaves the Russian market not from a good life, and due to sanctions and geopolitical risks.

At the same time, until recently, Stockmann JSC was balancing almost on the verge of profitability. And do not be embarrassed by 91 million rubles of net profit at the end of 2021. In retail, this is not so much money, and a year earlier the structure received a loss of almost a billion rubles. And before that it brought profit only in 2016.

However, this financial information may be fake. Note that for the purchase of Lamoda, Yakov Panchenko sent a petition to the FAS, because the formal buyer was not he, but the German company Eastrealty Beteiligungs Und Verwaltungs GmbH, which belongs to Panchenko.

That is, this is an offshore structure, where money and taxes from Russian buyers can flow. At the same time, the exact structure of Panchenko's business ownership is not clear - one thing is clear: he divorces Lamoda and Stockmann into different baskets.

Thus, the head JSC "Stockmann" previously belonged to the public law JSC "Stockmann ABP" from Finland - the same offshore, and only in January 2022, before the sanctions "storm," disappeared from among the founders. As if Panchenko knew that there could soon be problems with offshore companies, and hid the business deeper.

Apparently, Panchenko's money for Lamoda can be borrowed. And who else in our country is so generous in distributing loans and loans to businesses with offshore roots, but not Sberbank under the leadership of German Gref?

Moreover, after all, earlier it was Sberbank, even under Leo Hasis, as deputy chairman of the organization, intended to buy out the problematic Stockmann, drowning in debts and scandals. It was assumed that Stockmann would be integrated into the Sberbank Savings Market, an online store created by the structures of the state bank.

And the then deputy chairman of the board Lev Khasis will lead all this business, and indeed all the digital assets of Sberbank under one roof. Especially for the structure, she created a separate legal entity, where she had to transfer all her digital assets. These are Sber Eapteka, SMM Retail, and shares in a joint venture with VK, and many other services.

The deal was discussed at the end of 2021. Then Lev Khasis even left the post of deputy chairman of Sberbank in order to fully head the bank's new e-commerce holding. However, then the SVO began, and Lev Khasis suddenly left the country.

As The Moscow Post previously wrote, it was Khasis who was behind the Instamart Holding LTD offshore, for which Sberbank was registered (then it was still called Instamart).

In 2019, Hasis withdrew from Instamart's capital by selling his stake to the SBT Venture Fund II, one of whose investors is Sberbank itself. The company called such permutations "removing the risk of conflict of interested parties." Although in fact it turned out that Khasis sold the share to a division of Sberbank, which he also oversees.

And later, when Hasis was already, presumably, in the United States, other details surfaced. It turned out that he and his wife Olga are allegedly among the beneficiaries of the American group of companies Momentum. Moreover, in the States themselves, the former deputy head of the Pentagon John Rood was supposed to head the structure. RBC writes about this.

How this could all happen right under the nose of Herman Gref is a mystery. But with the departure of Hasis and the introduction of many cross-border sanctions against the Russian bank, there was no question of a deal to buy Stockmann. Moreover, Sberbank itself began to actively sell off its digital assets. The e-commerce ecosystem and all the related plans went into meltdown.

But the tasks of Yakov Panchenko also changed. Instead of selling his troubled asset, he decided to take advantage of the situation and buy up competitors - outgoing Western brands. Indeed, in the case of sanctions pressure, it was about large discounts. 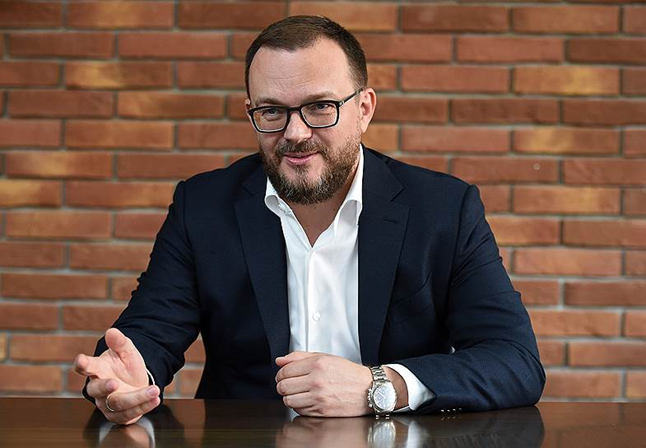 Where did Yakov Panchenko take the money for Lamoda - a big secret? Photo: Dmitry Korotaev/Kommersant

In addition, it is possible that Sberbank could give money to buy Lamoda just then, in order to buy it from Panchenko himself - so that everyone is in the black. The money is state. After all, Lamoda and Sber actively collaborated earlier - the bank even issued a special card with a cashback for the retailer's customers.

Kovalchuk behind his back

Yakov Panchenko has an influential and respected father - scientist Vladislav Panchenko, head of the Institute of Laser and Information Technology Problems of the Russian Academy of Sciences, chairman of the council of the Russian Foundation for Basic Research. Earlier, in 2017, he was one of the candidates for the post of head of the RAS - as they said, "from Kovalchuk."

Among other things, Panchenko Sr. is the director of the Institute of Molecular Physics at the Kurchatov Institute. And another famous scientist heads the institute - physicist Mikhail Kovalchuk. His younger brother, Yuri Kovalchuk, is the chairman of the board of directors of Rossiya Bank.

All personnel appointments at the institute do not pass without the participation of Mikhail Kovalchuk. Therefore, they should be familiar with Vladislav Panchenko for a long time and well. And why shouldn't he ask Kovalchuk Sr. for his son, who needs funds to expand his business?

In addition, the interests of Yakov Panchenko can be intertwined with the interests of Rosatom. In 2018, he wanted to build a site in the center of Moscow - an institute in Bolshoi Tolmachevsky Lane overlooking the Tretyakov Gallery.

The project was "major," could bring in billions of dollars. Farmengineering, where Panchenko Jr.'s structure owned 50%, concluded an investment contract for the development of the site with Giredmet (Rosatom's enterprise) back in 2012.

Giredmet suddenly decided through the court to terminate the contract, citing the reorganization of Pharminginiringg. Later, the investment project was terminated, and the structure itself went bankrupt.

If you now look at the business officially registered on Panchenko, he does not give the impression of an oligarch engaged in murky operations in the market. Officially, the value of his companies in different companies, judging by Rusprofile, is only 57 million - negligible, especially for the purchase of Lamoda. And the cost of his shares in these companies is completely indicated as negative. 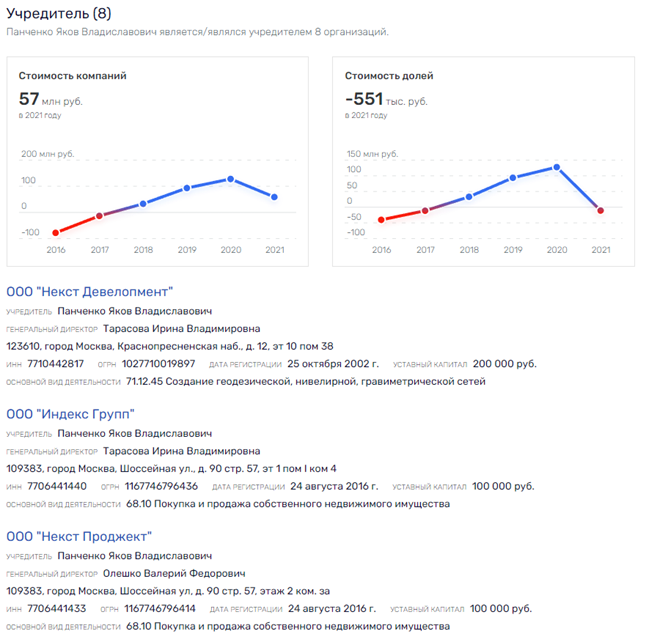 Panchenko is the founder of 8 legal entities. For the most part, these are frank dummies that resemble fictitious offices. Apparently, it is much more convenient to keep everything offshore, and send the money earned in Russia there. And in which case, you can go abroad - surely someone like Khasis will be able to advise on how to better settle there.