On the "needle": what prevents Sergei Gordeev from leaving in a good way?

After the sale of Russian assets by former PIK shareholder Kirill Pisarev, his partner, the owner of the organization of the same name, Sergei Gordeev, may regret that he himself cannot do this openly. And who will give him?

In fact, the head of the PIK developer Sergei Gordeev drove himself into a "trap" - on the one hand, unfulfilled obligations of a group of companies are putting pressure on him, and on the other, potential assistants and those who want to "profit" from state money?

Recall that on the eve it became known that the co-founder and ex-shareholder of the developer "PIK" Kirill Pisarev sold his Russian assets. Most of his business is located in the USA and Europe, the entrepreneur apparently completely wants to "migrate" there.

His ex-colleague Sergei Gordeev, who now owns PIK, may be glad to follow his former partner, but they are hindered by a pile of criminal cases potentially hanging over him in his homeland. Details - in the material of The Moscow Post.

In the field of state order

Sergei Gordeev's organizations are tightly seated in the field of state order. PIK structures supply the Ministry of Emergency Situations, the Office of the Governor of the Moscow Region, the FSB, the institutions of the Russian Guard and a lot of other departments of the country.

At the same time, despite the gigantic budget injections into the company through government orders, it is in an almost pre-bankruptcy state (several of its subsidiaries and affiliates are currently undergoing bankruptcy proceedings, most have already been liquidated).

If you pay attention to how the company fulfills these very government orders, then fears creep in that they will be completed at all. The head structure of PIK SZ has received six contracts during its existence - five of them are at the execution stage. Despite the expired deadlines for some of them, the only thing PIK was able to do was to sell the odnushka in Mytishchi to the Moscow Region government for 4.6 million rubles.

At the same time, an investment project for the construction of residential buildings for the "Capital Construction Department of the EMERCOM of Russia," concluded in 2010 with the imminent execution - March 2011 - is still under execution. 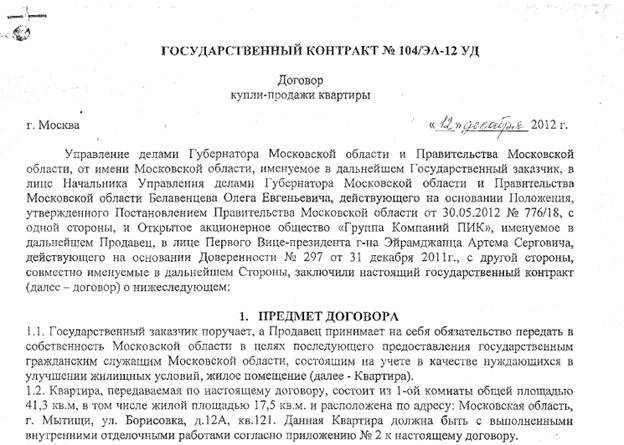 A total of 363 cases were opened for this company for a total of 5.3 billion rubles.

Without problems, the structure of PIK - PIK-Investproekt LLC sells apartments for orphans with the Krasnogorsk administration for, frankly, fat 4.8-5.5 million rubles. But PIK-Region asks the FSB even more - for 8 apartments in 2010, the service paid the developer 49 million rubles (6.1 million rubles for each - at that time you could buy a good "two-piece" for that kind of money). Interestingly, the contract is still under execution. And not one. PIK and the FSB have six of them - and all of them are under execution.

It is already faintly believed that employees will wait for apartments. But have the state money already gone?

The Ministry of Emergency Situations has the same situation that in 2010 concluded 11 state contracts with PIK-Region for the purchase of housing in the amount of 294 million rubles. Regularly receives from the developer of the apartment almost only the administration - mainly Moscow Region.

Undercover, behind the scandals

It is believed that allegedly Sobyanin, out of monetary gain, allows PIK to "develop" projects in Moscow, and at the same time the Moscow region. Now the company is being built on more than a dozen plots in the capital - despite numerous scandals, including those related to the quality of apartments being rented. What can we say that the company risks "collapsing," leaving bare skeletons of unfinished construction throughout Moscow. Back in 2019, only PIK-Comfort owed Mosenergosbyt 128 million rubles and hardly avoided bankruptcy.

Including the developer is known for regularly delaying the deadlines for the delivery of houses. In 2018, Rostekhnadzor revealed 30 violations in the PIK building under construction - RostovGazeta reported.

In October 2021, the federal TV channel REN TV released a video that tells, among other things, that the developer has found signs of a financial pyramid.

Will a lover of foreign dahli go "through the stage"?

Three operating companies are registered for Mr. Gordeev himself. One of them - "Paveletskaya Ploshchad" at different times belonged to two different offshore companies - "FUND KHREF" and "PAVMOLL LTD." Now the head of the office is Mall Management Group, tied to the foreign company PLAZA BI.VI. Gordeev's share in Paveletskaya Square is encumbered by VTB Bank. Revenue in the company, according to Rusprofile, has not been there for a long time.

It seems that through this list of organizations, Mr. Gordeev theoretically has the opportunity to withdraw state billions that go to the accounts of PIK structures? Does Andrei Kostin get his young ladies, without lending to an empty organization?

It is known that PIK shares are in the portfolio of the state bank. A strange structure for state investments, it is unlikely that Kostin does not know what he is buying, respectively, one gets the feeling that for such preferences the latter can receive something from Gordeev in return. Isn't the share from the funds of equity holders and state structures withdrawn to offshore? 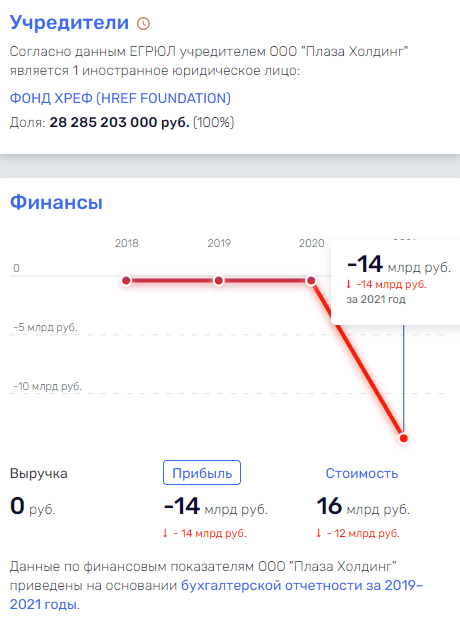 Another structure, Plaza Holding LLC, is also registered at the KHREF FUND. The company for 14 billion rubles is in the red in terms of profit and, it seems, is not going to replenish it. Photo: https://www.rusprofile.ru

Mirs LLC is registered on Gordeev, earning on renting out premises to the Moscow Center for the Provision of Public Services (GBU MFC of the City of Moscow). Almost a billion-dollar contract is concluded for ten years in advance - the generosity of Sobyanin knows no boundaries? Given the fact that PIK, with all its financial difficulties, is unlikely to last the five-year plan, it looks like the Moscow mayor's office simply "leaked" another portion of state money.

By the way, Mirs was also previously registered for offshore - a few months before its exclusion from the structure, the above contract was concluded. Have the money already flown to Cyprus? And were they divided between Gordeev, Sobyanin and Kostin? (VTB also holds Gordeev's share in the pledge.)

After the recent detention of Deputy Minister of Emergency Situations Andrei Gurovich, the position of the head of PIK may have become completely unbearable. It was the developer's structure that built an antique hospital in the Murmansk region, which did not accept a single patient as a result and was created with a lot of violations. Somewhere more than two hundred million rubles disappeared and Gurovich may be showing investigators in the direction of PIK. Surely they will remember him and unfulfilled contracts. Who knows what figure the amount of damage will then increase?

While Gordeev continues to maneuver in the sea of ​ ​ unfulfilled government orders, scandals, which are arranged by equity holders dissatisfied with the purchased meters and drown in debt. Only, it seems that the head of PIK himself drove himself into a trap, from which there is only one way out - and this is by no means a way to European countries after Mr. Pisarev.