Former official Viktor Olersky will order USC courts for 800 million rubles. Isn't this the money he could get from the budget by buying the "sanctioned" Finnish shipyard from USC? Is it time to pay back a "debt" to Chemezov now?

As the correspondent The Moscow Post, reports, the former head of Rosmorrechflot and Deputy Minister of Transport of Russia, and now a major entrepreneur Viktor Olersky expands his water empire. He intends to purchase the Gryphon catamaran and the Comet hydrofoil from the United Shipbuilding Corporation under the management of Alexey Rakhmanov.

The new vessels will be needed by the largest operator of river cruises in Russia, the Vodohod company of Olersky, for the new passenger route of its subsidiary Vodohod-Express - Novorossiysk-Gelendzhik-Sochi. The cost of one vessel - not less than 350-400 million rubles - a total of up to 800 million rubles. And we have no doubt that Olersky has this money - from the same USC.

It is rumoured that when he was Deputy Minister, Mr. Olersky was extremely close to USC, and even more so to the head of Rostec, Sergey Chemezov, under whose patronage both these corporations are located. Surprisingly, having served as Deputy Minister of Transport for only a few years, Olersky turned out to be a big businessman, the owner of the largest operator of river cruises, and not only of it alone.

Apparently, because of this, it was Mr. Olersky and his partners who volunteered to help USC, after the latter was included in the sanctions lists of Western countries. Then the corporation owned a serious foreign asset - the Finnish shipyard Arctech Helsinki Shipyard Oy, but because of these problems could not attract additional funding.

That's where Olersky might have appeared. Almost immediately after his departure from the Ministry of Transport, it turned out that the shipyard was becoming the property of the cruise operator Algador Holdings Ltd, whose owners were called the owners of the Nevsky Shipyard. As Fontanka wrote, the beneficiary of the Nevsky Shipyard could be Olersky himself, who could thus help USC get rid of the asset that had become unnecessary. The formal owners of the offshore company are considered to be Olersky's partners-businessmen Rishat Bagautdinov and Vladimir Kasyanenko.

At the same time, shipbuilder Rishat Bagautdinov is now calmly working as the general director of Vodohod LLC, which has decided to purchase vessels for the new route of its subsidiary. Kasyanenko used to be a co-owner of the Sea Terminal of Tuloma - before it became owned by the offshore Capstans Holding Limited. Olersky himself is probably behind it.

Moreover, several other companies that are large recipients of state contracts are tied up in the same offshore company. Including from companies that could be associated with USC, and certainly related to marine and river topics.

In particular, Infotech Flex LLC, with 10 thousand authorized capital, has state contracts for almost 100 million rubles. Of these, almost 21 million are from Rosnefteflot JSC. And here is another strange company - Bolshaya Morskaya 37A LLC. Which, without having a penny of revenue for 2019, has assets in the amount of 449 million rubles. Is it possible that the money from Infotech's state contracts "settles" there? It is also interesting that with an authorized capital of more than 10 million rubles, not a single person officially works in Bolshaya Morskaya.

So, if Olersky really was behind the purchase of the shipyard from USC, most likely, the agreement on this was made in advance, when he was a deputy minister. Rakhmanov and Chemezov should be very grateful to Olersky. And he can be grateful to them now - for ordering two ships for 400 million rubles, of which God knows how many million could have settled in the pockets of Rakhmanov and Chemezov themselves for old friendship.

Olersky has long been called a "water baron" behind his back for his deep involving into the business of river and sea transportation. It was he who, after a career as an official, turned out to be the owner of a rather large Vodokhod, the North-Western Shipping Company (yes, the whole shipping company) and the very mentioned shipyard. These are also ships, ports, and terminals. A real "water empire".

Continuing about the offshore empire, which is attributed to Olersky. Capstans Holding Limited, which turned out to be the owner of the port of Toulon, has already been mentioned. But the same key asset of Olersky, where he is the chairman of the board of directors, the Vodohod company is 100% registered in the Cyprus offshore company Volga-Baltic Cruise Lines Limited.

Not only that is noteworthy, but also that the fully offshore company has almost 71 million rubles in its portfolio of state orders. And many of them were received even before Olersky was connected with the company and left the Ministry of Transport. Did the former official "help" the structure not far from him? 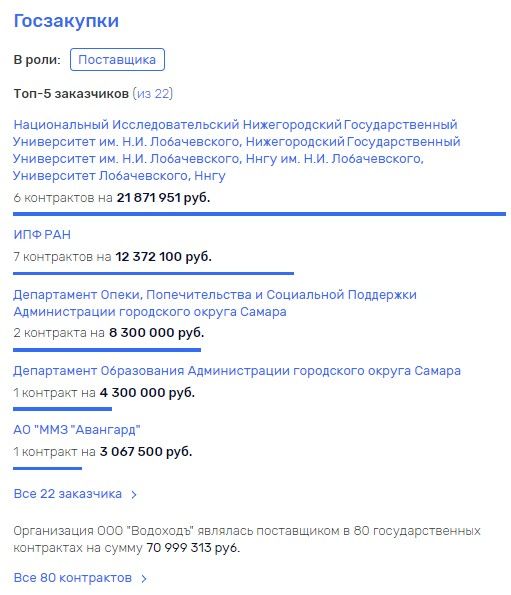 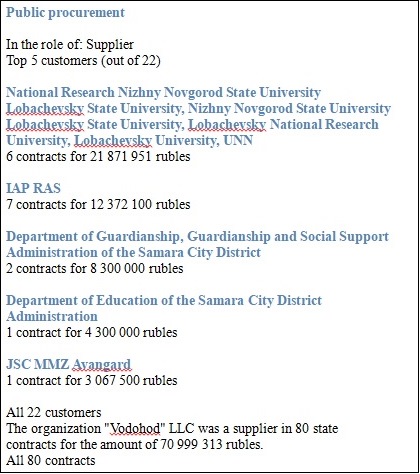 Whether this is true or not, but Olersky, being an official, managed to be noted in a number of large-scale infrastructure projects. However, with a minus sign. He is credited with an interest in the construction of a railway line to the port of Lavna on the coast of the Kola Peninsula.

Allegedly, he was one of the lobbyists for the conclusion of an agreement for the construction of the branch with Stroygazconsulting. The contract amount is 45 billion rubles. But soon the contract was terminated by agreement of the parties, the project caused a lot of problems and opposition from environmental activists.

And here we return to the already mentioned port of Tuloma, which may be owned by Olersky himself. The fact is that together with the port of Lavna, the management of the project for the construction of a new deep-water Tuloma port on the western shore of the Kola Bay planned to use this railway branch. According to Kommersant, it turns out that one of the beneficiaries of the project is none other than the former Deputy Minister of Transport of the Russian Federation Viktor Olersky.

Officially, Stroygazconsulting refused to implement the project due to the deterioration of the market situation for the sale of coal - the main commodity that was supposed to be transported by road. Only now the company managed to master about 26 billion rubles from the allocated money. Whether something could have gone to Olersky if he was involved in the contract is an open question. However, it is difficult to get rid of the idea that an official could make a decision based on his own interests, and not the interests of the country.

But in this case, at least the project was not completely abandoned. It turned out much worse with the construction of an international port in the city of Pionersky, in the Kaliningrad region. A great place to realize Olersky's business interests related to water transport.

However, the project could not be implemented - it was stopped due to the theft of 1.6 billion rubles from the advance payment. The construction was stopped, and in 2020 the company was completely bankrupt. This was reported by TASS. However, there is another detail that not everyone mentions: at the time of bankruptcy, Bolverk had a portfolio of state orders worth almost 15 billion rubles. Meanwhile, 7.4 billion rubles of them fell on Rosmorrechflot - a contract for the construction of a port in Pionerskoye. 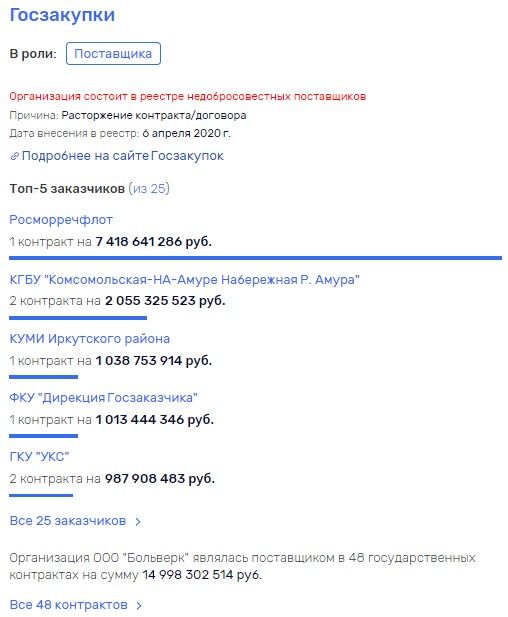 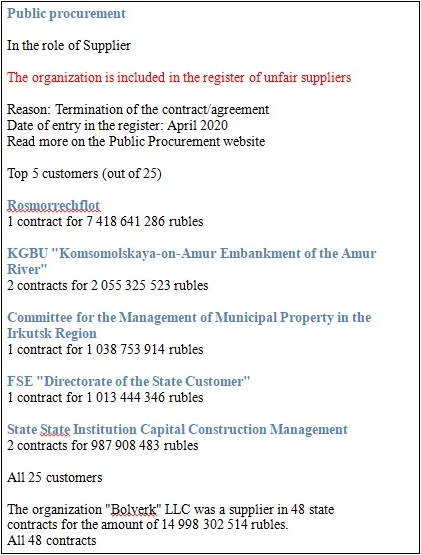 In this regard, the question is - could all this have been done on purpose? Most likely, the temporary manager of the company also thought after the introduction of the bankruptcy procedure - he demanded to bring the managers and owners of the company to justice. But nothing has changed so far, and there are no questions to Olersky. Who cares, he gave the contract to a company that ended up in the register of unscrupulous suppliers. Wanted better?

At the same time, Stanislav Loban is still listed as the owner of the company that has sunk into oblivion. Shortly before the collapse, he set up the structure of the State Transport Leasing Company, which was to be under the control of the Ministry of Transport, where Olersky worked.

At the same time, other Loban’s companies, for example, Elegant LLC, were also not successful and worked in the negative. It is noteworthy that earlier in the list of founders of Elegant there was also a former general director of Bolverk, Sergey Shipitsyn, who was detained in the case of a particularly large fraud with money for the port in Pionerskoye.

Now, Artyakov works as a deputy to the head of Rostec, and also is in the Board of Directors of the United Shipbuilding Corporation. That is, they - Chemezov, Loban, Shipitsin and Artyakov also know each other for a long time. And Olersky could help with Bolverk in his time as deputy minister. Is the circle complete? But where 1.6 billion rubles went, aimed for the port in Pionerskoye, it is still not clear.

Of course, Olersky settled in this life not only during the period of work in the ministry. At one time, he was the head of the North-Western River Shipping Company, many of whose assets could eventually flow to him. Also, the name of Olersky was associated with the trial of twelve members of the Kingisepp organized criminal group and a former member of the Federation Council, Igor Izmestyev.

Evil tongues are gossiping, allegedly Izmestyev had several very influential business partners, including Viktor Olersky, as well as the mayor of Shlisselburg, Dmitry Vasilenko. After leaving the post of mayor in 2005, Vasilenko immediately became the director of External Relations of the North-Western River Shipping Company, which controls the Nevsky Plant, and Viktor Alexandrovich was then the chairman of the board of directors.

And if Olersky did not disappear when he was not a very big businessman, then now, when millions of state orders are behind him and, most likely, the influential Chemezov and Rakhmanov as well, he has nothing to be afraid of at all. So why not go on another cruise on the budget "rivers" - since there is such an opportunity?