Oleg Tinkov: do without the Motherland

Oleg Tinkov finally said goodbye to Russia, but she is unlikely to be killed for a long time by her lost businessman son, to whom a lot of unpleasant questions have accumulated over the years of work.

A celebration of unheard-of generosity

"Farewell Tinkoff Bank, goodbye Russia! I have nothing left in Russia, "wrote businessman Oleg Tinkov after he recently sold his 35 percent stake in Tinkoff Bank's parent company, TCS Group. This is reported by the correspondent of The Moscow Post.

The buyer was the Interros group, owned by billionaire Vladimir Potanin. It is curious that in connection with this transaction, Tinkov experienced mixed feelings: on the one hand, he was grateful to Potanin for the fact that he quickly and without a doubt bought his assets. On the other hand, Oleg Yuryevich was terribly sorry that his share in the bank went to Potanin literally "for a penny."

However, it is stupid to regret Tinkov in this situation. It is clear that if he were in Potanin's place, he would have done the same (if not tougher). This confirms all the experience of Tinkov's business. Actually, according to the concepts of Oleg Yuryevich himself, the head of Interros also showed miracles of unheard-of generosity - after all, 350 million dollars are not lying on the road. In addition, Potanin bought an asset from a person who just a few days before had openly abandoned Russia - his homeland, by the way. Which gave him everything, including free education and business opportunities.

Before the sale of the bank, on April 19, Tinkov published a post on social networks, where he said that he was taking all his brands from the Russian Federation. He also turned to the "collective West," clearly wanting to please (and for this you need to renounce your Russian past, which was actually done).

None of Tinkov's colleagues and partners said a single kind word about him after that. "One thing is not clear in this story. Being a public person, having weight in society and a huge fortune, a person apparently did not have his own PR team that would prevent such flaws, or somehow smooth them out, "says private investor Vladislav Kofanov. "If Tinkov deliberately wanted to express his point of view, and clearly understood what he risked, then it was not worth giving an interview to the Western media later, where he complained about a difficult fate."

Regarding the departure of Oleg Tinkov from Russia, Vladislav Kofanov said that the businessman will probably feel comfortable there, at least for the first time, until the local authorities thoroughly rob him. "It is worth admitting that Tinkov is an absolutely pro-Western businessman, this was evident in many of his interviews and the actions of his business. I think that he himself counted on some kind of help from Europe and the West as a whole. However, the rescue of Russian billionaires is not a slightly fashionable trend in the current West. As a result, this did not save his business, and the sale of his stake in TCSG took place, "he said.

The dark motives behind a successful banker

However, as experts suggest, in a situation with an open letter, Oleg Tinkov could not act entirely of his own free will. In fact, the banker could openly oppose the Russian political course after possible persistent requests from Western "well-wishers." The fact is that earlier, in 2020, a criminal case was opened against him in the United States for tax evasion. According to the US Treasury, Tinkov deliberately underestimated the size of his fortune, for which he faced a long prison term. But in the end, the American judge took into account that the businessman was sick with leukemia, and wrote him a fine of only... $500 million. RBC wrote about this.

At the same time, in March 2022, as part of extensive US sanctions against Russian oligarchs, Tinkov was blacklisted and risked losing all his vast property in the European Union and the United States. That is, they could force him from the West to make an "anti-Russian cuming out." During the interview, Tinkov also distorted the motives for selling the stake - the fact is that the administration of Tinkoff Bank itself has long insisted on it. After all, after the "cuming-out" of its creator, the bank faced a severe crisis, and the Russians began to massively take their deposits from it.

However, the bank itself, created by Tinkov "from scratch," provided very peculiar services to its clients. According to evil tongues, under Tinkov, in addition to traditional account servicing and payments, the bank allegedly offered strange transactions with accounts on dubious grounds in private.

Also, Tinkov periodically created situations when large amounts were strangely debited from customers' accounts, which led to proceedings. There were many other "know-how" in his work, which invariably ended with a tangible material profit in favor of the bank. Such feints with the money of individuals and legal entities who trusted Tinkoff Bank looked wild even against the background of the imperfect banking system of the Russian Federation.

Also, after the scandal with Tinkov, very interesting details about the oligarch's youth surfaced. It turned out that Oleg Yuryevich did not learn the science of entrepreneurship at all in the academic classrooms of the Mining Institute. His business courses were smoky toilets in downtown Peter, student dormitories and vegetable-fruit street trays. In this entourage, the future banker "stuffed" French perfumes, jeans and other consumer goods. And also steamed buyers of potatoes and bananas - and, according to rumors, he could not always do it honestly. Do not weigh - do not live?

In one of the long-standing interviews with the Russian media, he once said: "In my youth, I especially liked to sell fruits, because you can't earn much on vegetables, no matter how hard you try. But on fruits I managed to make money, especially on bananas. Banana is the most profitable product! After I myself worked in the stall and earned a couple of thousand rubles, I still, when I go to the market, look very carefully for the fingers of sellers who ship fruits. " 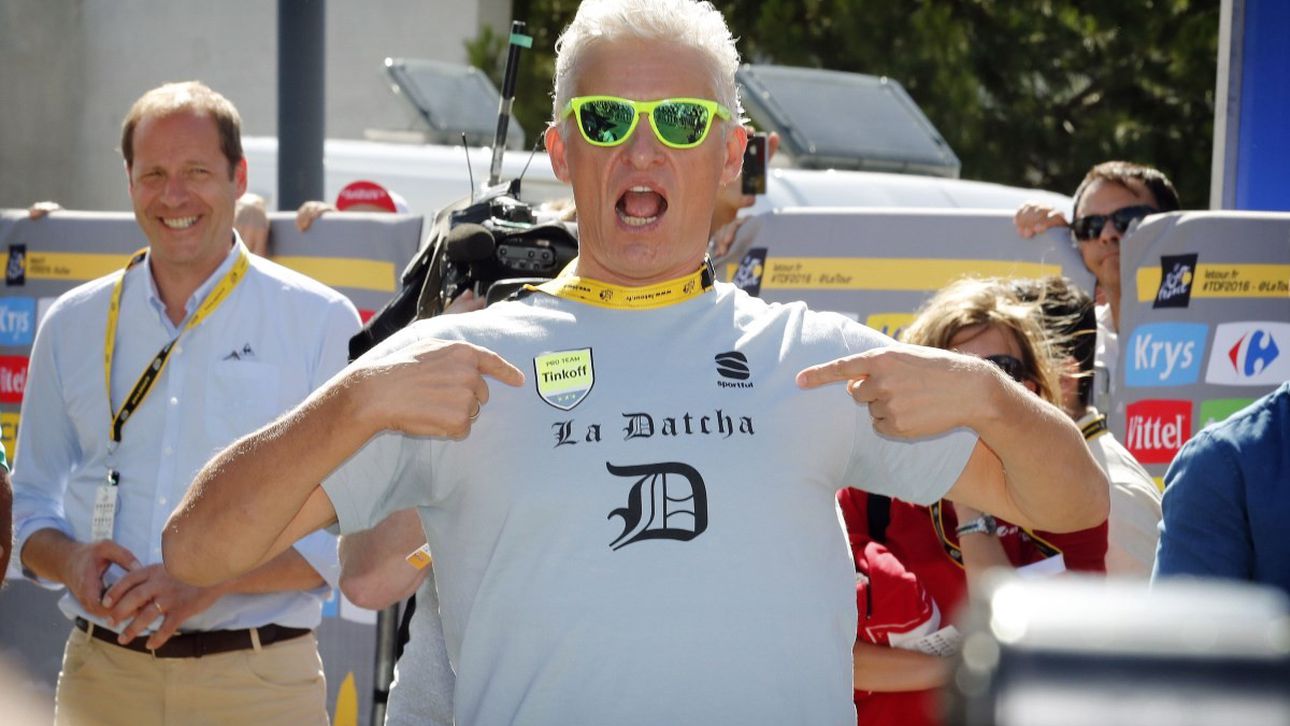 Oleg Tinkov received from Russia everything he could, and was so. Photo: wielerrevue.nl

However, many subsequent projects of this versatile person, who has peculiar views on business, ended in frank failure. So to appear as Mr. Success without fear and reproach, as Tinkov would like, he will not work.

The chain of stores "Technoshok," the production of frozen products "Daria," breweries and beer bars "Tinkoff" - everything sank into oblivion, leaving Tinkov with money, and his partners with huge debts. The same algorithm can be found in the activities of Oleg Yuryevich's last venture, Tinkoff Bank.ъ