Billionaire Alexander Lutsenko, who recently changed his "residence permit" from Dutch to Russian, enjoys the serious support of the authorities, which leads some to think about the corruption component.

According to the correspondent of The Moscow Post, the agricultural group "Commonwealth" Natalia and Alexander Lutsenko can increase the previously announced project for the construction of a plant for the processing of oilseeds in the Kursk region from more than 1 million tons of processing per year to two. The oil extraction plant will become the largest enterprise of its kind in Europe. According to Lutsenko is there a "hat"?

The order to work out the issue of signing an agreement with the group for the construction of the second stage of the oil extraction plant (MEZ) in the Kastorensky district was given by the governor of the Kursk region Roman Starovoit. They plan to sign an agreement on the expansion of the plant at the St. Petersburg Economic Forum, but the process will be only a formality. As Starovoit himself admits, the decision has long been made.

The governor also constantly praises his "Commonwealth" - for example, a very complimentary publication appeared on the official website of the Administration of the Kursk region last year following a visit by the head of the region to an oil extraction enterprise.

For Mr. Lutsenko, as it may seem, someone constantly "fits in" - now Starovoit, earlier the head of the Leningrad region Alexander Drozdenko, the governor of the Kaliningrad region Anton Alikhanov and the deputy minister of agriculture Oksana Lut were suspected of this. Thanks to the ability to conduct friendship with whom is it necessary, Lutsenko became one of the richest people in the world?

Offshore for an "outside" company

It seems that Mr. Lutsenko headed for "building bridges" with the heads of various regions. Recently, his company changed its "residence permit" to the Kaliningrad region, previously the parent company of the group was registered in the Netherlands. And he did not move abs to where, but to the so-called "Kaliningrad offshore" - a special administrative region (SAR) on Oktyabrsky Island.

There, in particular, it provides for the abolition of taxes on the income of international holdings, which they receive in the form of dividends, and there is no currency control. Offshore on Oktyabrsky Island is designed primarily for companies that today place their capital abroad. Some companies there even have a special organizational form: an international company LLC, CJSC or JSC.

To understand which enterprises have gathered there at all: as RBC clarifies, companies from the International Group for the Development of Financial Measures to Combat Money Laundering (!), The European Union, as well as from popular but unreliable jurisdictions, including the Bahamas and Cayman Islands, Barbados, Mongolia and others, can "move" to the SAR of the Kaliningrad Region and PrimorKKrai K. All this suggests that on Oktyabrsky residents of the SAR may not be engaged in completely legal things.

The company Lutsenko, by the way, became one of the first residents of the SAR. And this is not surprising, because in general the idea of ​ ​ creating such a zone pushed... General Director of LLC UK Commonwealth Alexander Shenderyuk-Zhidkov! That is, we can assume that this whole offshore story could be invented specifically for Lutsenko.

Shenderyuk-Zhidkov has been working in the Commonwealth Group since 2006. He began as an ordinary economist and for ten years became the financial director of the region of Russia and the CIS, and in 2018 the head of the structure that manages all Russian "daughters." Until recently, he also served as Deputy Chairman of the Government of the Kaliningrad Region, where he oversaw the development of industry, agriculture, the fisheries complex, subsoil use and ecology of the region. That is, he also worked in the direction of business Lutsenko. And Alikhanov actively helped him in this?

Moreover, when back in March 2017, the then First Deputy Prime Minister of the Government of the Russian Federation Igor Shuvalov arrived in Kaliningrad to open the office of the Russian Export Center. At the meeting after the event, a few meters from him, the owner of the Commonwealth sat at one table.

Shuvalov liked it in Kaliningrad, he was given a warm welcome, and at the end of his visit he asked Kaliningrad officials what requests they had. They asked for help with the creation of offshore. Shuvalov was not aware of this initiative, but promised to support it, a person familiar with the negotiations told Novy Kaliningrad. So, the billionaire was able to "suit" not only Alikhanov, but also Shuvalov?

In the end, when the zone finally appeared, various rumors crawled about its residents in the market - allegedly, they organized a banal "laundry" there. By the way, the odious co-owner of Vostochny Bank Artem Avetisyan was the very first to re-register his company in the SAR. In 2020, Oleg Deripaska's Rusal became his neighbor, who thus tried to get away from the "sidelines" of US sanctions imposed on him. What to say, a very interesting company!

Lutsenko generally likes to work in very interesting jurisdictions - for example, earlier the headquarters of his company was located in Luxembourg, which gained fame as the "main offshore" of Europe. And perhaps the businessman could use this feature of it for certain purposes.

In 2014, its structure became the object of persecution of the Danish tax authorities on suspicion of billions in withdrawals, Interfax-West writes. Two companies were taxed - United Trading and Scanmills. For many years, United Trading in Kolding, the most important hub of the Baltic port, was used by Alexander Lutsenko as a holding, and then was practically ruined.

However, that story for the billionaire did not come to light. Experts then explained this by the fact that the concern "Commonwealth" has a confusing structure - shares and companies can be indefinitely bought and sold inside the system. And in this state of affairs, it is very easy to hide the "ends in the water."

Until March 2021, MCOOO Commonwealth Rus was recorded on a company from Luxembourg

Seeing, realizing that they began to slowly "press" him behind the bugle, he decided to settle in Russia, where his subordinate just created the necessary offshore base. And as soon as he was here, various preferences from the state began to fall on him as from the horn of abundance. In particular, last year, the Russian government leased a plot of land for 10 years in the Lomonosov district of the Leningrad Region for the construction of the grain terminal of the Baltic Grain Terminal company, which is part of the Commonwealth Group of Companies. The plans included the construction of a production and logistics complex, the total investment was estimated at 35 billion rubles.

Suddenly, a wave of unauthorized protests by local activists began, since Battery Bay remains one of the cleanest sections of the Gulf of Finland coast and is in demand from vacationers. The authorities made a concession to them and in the summer of 2020 the permission to build the project was withdrawn. However, according to the Club of Regions, in December activists noticed that the investor had begun exploratory work. Then it was believed that the withdrawal of permission was nothing more than the PR move of Alexander Drozdenko to secure re-election in the autumn elections. It was said that the structure of the "Commonwealth" continued to conduct work with the consent of the regional leadership.

However, it was recently reported that the authorities of the Leningrad region prepared alternative areas for the Commonwealth Group of Companies Alexander and Natalia Lutsenko. It is likely that the corporation may receive a plot near the Primorsky CPC of the odious entrepreneur Ilya Traber, who, according to rumors, can control the ports of the Leningrad region. It is believed that the latter is close to the previous and current governor of the region. Earlier this was told in detail by The Moscow Post.

At the beginning of last year, it was also reported that the Commonwealth could enter another monetary project. The Ministry of Transport, together with the authorities of the Kaliningrad region, announced its intention to involve in the implementation of the project for the reconstruction of the Kaliningrad Sea Canal in order to allow the passage of ships of the Panamax class "Commonwealth" on it. The company is the largest stevedore of the port, the total project is estimated at 35-46 billion rubles. In addition, companies in the region transferred another 37 thousand square meters to Svetlom to expand production.

As it seems, Oksana Lut, Deputy Minister of Agriculture, could also "suit" Lutsenko. Now the Commonwealth has become a monopolist in the export of sunflower, rapeseed and soybeans. And just with the filing of Louth in 2019, the Union of Grain Exporters was established, which, according to rumors, was created to promote the interests of certain companies - Aston, RIF and the Commonwealth. In April-June 2020, a ban on the export of sunflower, rapeseed, soybean was introduced. As a result, according to Davydov. Index, ships were detained in ports, contracts of all suppliers were disrupted, except for the Commonwealth Group of Companies, whose ships were issued by personal order of Louth.

The warm relationship between the deputy minister and the company is evidenced by the fact that Ms. Louth attended the ceremony of laying the first stone of the same Commonwealth plant in the Kursk region, which will be the first soybean processing enterprise in the region. An important detail: this project is being built with the support of Rosselkhozbank, in which Lut previously worked as a deputy for the current head of Menselkhoz - Dmitry Patrushev.

All this gives reason to think that the "connections" between Lutsenko and Louth have been established for a long time. Moreover, Louth has long been rumored about her active lobbying for the interests of certain agricultural enterprises, which may include the Commonwealth. Earlier this was told in detail by The Moscow Post.

However, all this can be just speculation. You have to do with them, since there is actually very little information in open sources about the Commonwealth and Lutsenko. But, for a second, Alexander Lutsenko was twice on the Forbes global list (in 2013 and 2015), his wife was on the 10th line of the Forbes rating "25 richest women in Russia" in 2018. According to the rating of the publication for 2020, the condition of Alexander Lutsenko and his family is estimated at $800 million, the businessman ranks 119th in the rating of the richest businessmen in Russia. As they say, money loves silence? 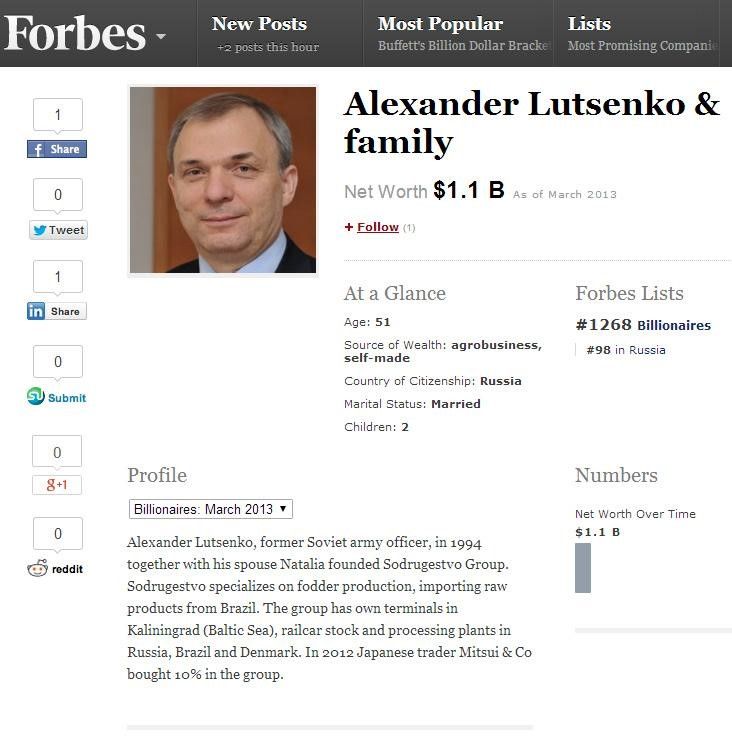 A very entertaining character, Mr. Lutsenko, seems to have "registered" tightly in the Russian business agenda - then and now there is news that something was allocated to him, somehow helped, after which his already successful business strives uphill. At the same time, he manages to still remain non-public and for loyalty could not even organize a lot not a little, but a separate economic zone near Kaliningrad. What happens in those dark corridors?

18 November, 8:10
Not uniform medicines: the construction of the cancer center turned into Repik