RDIF and RCIF Russian Investment Funds could appear up to their ears in "offshore".

According to the correspondent of The Moscow Post, in one of the previous investigations, the journalists of our publication came to the namesake of an extremely interesting character, the General Director of the Russian-Chinese Investment Fund Investment Management (RCIF) Yuri Trofimov. It turned out that he manages several offshore companies that own companies with state participation.

Meanwhile, RCIF is a subsidiary of the Russian Direct Investment Fund (RDIF) under the management of "investor" Kirill Dmitriev. He is also a co-Director of RCIF, that is, he works together with Yuri Trofimov. And, as they say, participates with him in a number of commercial projects, the money for which may come from the budget.

The investigation mentioned above "How Dmitriev and Chekunov crossed the Rubicon." It referred to the Rubicon LLC company, which was to build a bridge over the Amur river. It was first bought into state ownership, and then several Cypriot offshore companies suddenly appeared in its shares - Laxont Holdings Limited and Exarzo Holdings Limited.

Initially, their share in Rubicon LLC was small, but in November 2015, it suddenly grew significantly - each of the offshore companies began to own 37.5% of the company. Another 25% remained for the state structure of JSC Far East and Arctic Region Development Fund. 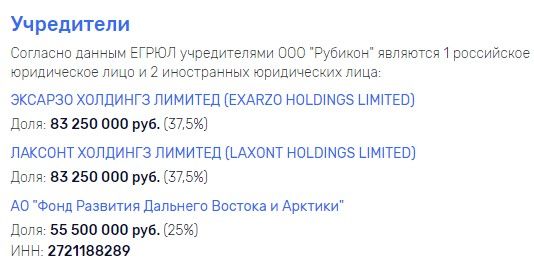 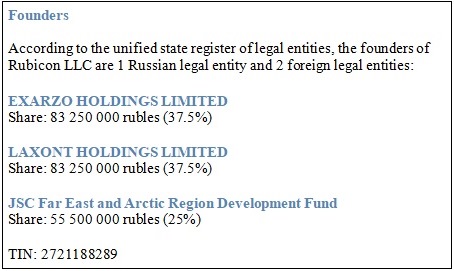 As a result of the investigation, it turned out that according to the Cyprus register, Yuri Trofimov is Director of both offshore companies. Information about it is available here, a screenshot of one of the mentioned companies.

Yuri Trofimov is listed as the Director of Laxont Holdings Limited

We were wondering what other major projects these offshore companies could participate in, which, apparently, are headed by Yuri Trofimov, and the person with the same name, in fact, is an official in a public-private fund. Moreover, these offshores are "mentioned" in the projects of different companies, where public money can flow through RDIF and RCIF. Besides, some regularly receive large state orders for tens of millions.

In particular, the Cyprus offshore Exarzo Holding Limited company owns part of the stocks of Detsky Mir, more than half of which belongs to oligarch Vladimir Yevtushenkov. Moreover, RDIF, which (under Dmitriev's management, let us recall) participated in the sale of its stocks, also openly participates in its activities there. This was reported by TASS.

The reason was too obvious: it turns out that the RDIF lends to the oligarch's structures. Yes, from our own funds, which should be invested in major Russian projects, money is given to Yevtushenkov's companies.

For what purpose? For example, so that in 2018 Yevtushenkov could pay Bashneft funds under an agreement with Rosneft. We are talking about 100 billion rubles, a huge amount. This was written by the Prime publication.

That is, the private JSFC Sistema borrows from a state-owned structure to pay its debts to the state corporation. Wait, where are the interests of ordinary Russians? Or were there only the commercial interests of Mr. Dmitriev and Mr. Trofimov?

The following story is related to a private enterprise, Transport Concession Company LLC (TTK), which is developing the Chizhik tram project in St. Petersburg. It would seem that what does the state interest have to do with this, if municipal public electric transport is already working perfectly in the city?

But, according to RBC, the offshore Exarzo Holding Limited, which entered the project, does not even hide that it has to do with RCIF under Trofimov. Earlier, the Vice-Governor of St. Petersburg, Eduard Batanov, to whom detractors attribute interest in this project, said that the city could join the development of Chizhik. What does this mean if not the prospect of billions being invested in?

Interests and other partners in this project. The controversial entrepreneur Pavel Prass’ IC Leader entered it together with Exarzo Holding Limited. His company owns 35% of TKK. But something else is interesting. Pavel Prass, like Mr. Trofimov, is a Russian investor and financier.

According to the authors of the Novosti Volgograda website, allegedly Prass, or rather its IC Leader (partner of Exarzo!) it is the real owner of the concessionaire companies of the Volgograd utility networks: Water Supply Concessions and Heat Supply Concessions. Moreover, this structure has state orders from these and other state-owned companies for more than 250 million rubles. Does it mean that Prass gave state contracts to himself, and "grabbed" money through the government funding with the other hand?

But that's not all. Among the founders of IC Leader we find CJSC Leader, which was once a parastatal structure. Because the now-liquidated NPF Gazfond is among its founders, a pension fund created by the structures of the state-owned PJSC Gazprom. Gazprombank remains another owner.

Now NPF Gazfond will be "collapsed", and the company brings its owners, some of which are hidden, huge profits. In 2019 alone, the profit of CJSC Leader amounted to 3 billion rubles. But another thing is more interesting: it turns out that CJSC Leader is a pension fund asset management company! Is it the reason of state participation?

And its CEO was allegedly a long-time acquaintance and certainly a partner of RDIF structures Anatoly Gavrilenko. The character that is familiar to The Moscow Post! Earlier, there was a version according to which Gavrilenko allegedly could be involved in the collapse of not one, but a number of funds. 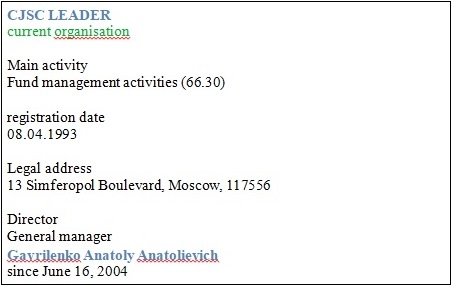 Moreover, in his article Will Anatoly Gavrilenko send pensions to offshore? our publication expressed fears that Gavrilenko's actions in the pension fund markets could allegedly lead to the transfer of billions of Russian pensioners' money abroad. Such a management policy would perfectly fit into the outline of Dmitriev and Trofimov's actions with their offshore affairs. Not to mention the fact that the RCIF itself, as it turned out, was originally registered on offshore from the Cayman Islands.

RDIF, MC Leader and Gavrilenko have been cooperating on a number of infrastructure projects for a long time. At the same time, no one is at all confused by the collapse of Gavrilenko's funds or rumours that another possible partner, Mr. Prass, could take over the entire network market of Volgograd. In 2017, the partners even issued a joint press release outlining the prospects for infrastructure cooperation. It is now available on the RDIF website.

Never forget about ourselves?

Whether money is divided on these projects, and if so, how much is an open question. However, let's turn back to Yuri Trofimov, because his activities are not limited to RCIF, Cyprus offshore companies and investments with dubious partners in Russia. In addition to RCIF Investment Management, he is also the head of RDIF Investment Management-22.

Only one person is officially registered in the company with an authorized capital of 35 billion (!) rubles -apparently, Yuri Trofimov himself. Part of the structure is managed by the RDIF management company, but the other is JSC Corporate Management, which is owned by the RDIF corporate centre.

This company also has only one employee and very strange financial indicators. At the end of 2019, revenue was zero, but there was a loss of half a million rubles. Why does RDIF need such a structure, if not for use as an "intermediary"?

But let’s move on, because Yuri Trofimov had another business, NAFTA Invest LLC, which is engaged in fuel trading. There he acted as the founder. With revenue of 3 billion rubles for 2019, only eight people work there - not bad. But now the Fund is registered... on the Cyprus offshore Spielberg Holdings Limited, and even pledged 100% in the Russian Akibank.

In addition, Mr. Trofimov was and remains the founder of RBM Rus LLC, which deals with real estate. The only employee there is probably its CEO Roman Titov. And this is also a remarkable person.

It turned out that this is an entrepreneur from the Volgograd region, who acts as the General Director of Delta Capital LLC. The structure has only one employee on staff (classic?) with 10 thousand of the authorized capital, and more... state contracts, zero-cost assets and inaccurate information about the address of the legal entity (according to the Rusprofile service).

Putting together all this seemingly disparate information, an involuntary question arises: what do "investors" like Trofimov do in our country? Managing a bunch of some offshore companies, having in their luggage companies with an incomprehensible ownership structure and a single employee, more similar to offshore companies, they surprisingly "partner" with a variety of scandalous personalities, oligarchs, directing budget, in fact, money to their projects.

And what does this have to do with the interests of the Russian state? This seems to be a rhetoric question.