The former ex-deputy minister of transport goes out of his way to please his "owners."

It seems that water transportation in the Russian Federation and related shipbuilding contracts "divide" the old "comrades-in-arms" - Olersky, Franki and Rishat Bagautdinov.

Located in Nizhny Novgorod, the Krasnoye Sormovo shipyard (part of the United Shipbuilding Corporation, USC) will build three cruise ships of the Karelia project for Vodokhod. The key beneficiary of Vodokhod is the scandalous former Deputy Minister of Transport of the Russian Federation, and now a major businessman Viktor Olersky.

Yesterday there was information that the shipping company from St. Petersburg "Paula Rise" filed a lawsuit against Krasnoye Sormovo. It turned out that there are direct connections between Pola Rise and Vodokhod, and in the whole story Gleb Frank, a large businessman and son of the former Minister of Transport of the Russian Federation, and now the head of the board of directors of the same state corporation USC Sergei Frank, may be interested in the development of the fleet of ships of both companies.

The Moscow Post correspondent understood the intricacies of the business of former officials and their offshore affairs.

In total, seven Karelia ships will be built, the cost is 15 billion, of which 6-7 can go to ships for Vodokhod, state money, gives GTLK. Olersky himself is associated with the former head of the Ministry of Transport Sergei Frank, now the head of the Board of Directors of USC, he was called the patron saint of Olersky. Olersky's son, Gleb Frank, owns 50% of Tulom Marine Terminal LLC (through Rockwell Capital LLC). Another 50% of the terminal until April 2022 was owned by the Cypriot offshore company Kapstans Holding Limited.

And the same offshore company today is the owner of 66% of the shares of Paul Rise, which presented claims to the Nizhny Novgorod shipbuilding plant. Their essence is quite simple, the company is seeking payment of 28 million rubles and almost $600 million in compensation for the broken propeller-steering column of the Pola Maria dry cargo ship, which was produced precisely at Krasnoye Sormovo.

Another owner of Paul Rise with a share of 33.3% is the well-known St. Petersburg shipbuilder, manager and businessman Rishat Bagautdinov, a longtime associate, and, as it is believed, one of the key business partners of the former Deputy Minister of Transport of the Russian Federation Viktor Olersky.

And he, Rishat Bagautdinov, is the general director of Vodokhod LLC, which claims to be the largest company carrying out transportation, including cruise, by water transport to the Russian Federation. The structure itself, we recall, is registered on another offshore company - Volga-Baltic Cruise Lines Limited from Cyprus. 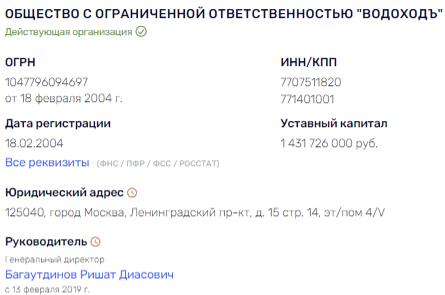 At the same time, Mr. Bagautdinov may also have connections with the business of Gleb Frank, the son of the former Minister of Transport. The already mentioned holding "Kapstans Holding Limited" is the owner of a 50% stake in LLC "PKK Nord" from the Murmansk region. The company is engaged in storage and warehousing services.

And the second half belongs to Rockwell Capital LLC, which owns the Tuloma terminal and whose beneficiary is the already mentioned Gleb Frank. 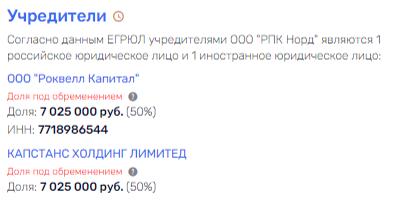 Thus, through a network of Russian and foreign companies, one can trace the connections between Viktor Olersky (the fact that he is the beneficiary of Vodokhod, the leading media have repeatedly reported), St. Petersburg shipbuilder Rishat Bagautdinov and the most influential family of Franks. Moreover, they combine in their hands both transport (Vodokhod, Pola Rise) and stevedoring (Tuloma terminal), and warehouse (PKK Nord) assets.

But this is not all, because the shipbuilding company Emperium LLC from St. Petersburg, about which The Moscow Post previously wrote in detail, may be located in the Olersky contour. That is, directly and shipbuilding assets.

About 32.5% of Emperium LLC belongs to Andrian Pravdin. And he also owns NPK Morsvyazavtomatika, which has a connection with the Emerium shipyard in St. Petersburg. According to RBC, in March 2021, the largest cruise operator of Russia, Vodokhod, began replacing its fleet in St. Petersburg, and concluded a contract for this worth 1 billion rubles with the aforementioned NPK.

In all these intricacies of companies and persons, it is not so much embarrassing that these influential people can act as almost a single group of persons in order to divide the passenger and water transportation market. And the fact that among them are former influential officials. After all, now these companies receive large government contracts.

The same Vodokhod, almost a center asset in all this layout, has in its portfolio of government orders in the amount of over 91 million rubles. And this does not include 5-6 billion rubles, which should indirectly go through the company, thanks to the funding that will go through the GTLK for the construction of three ships "Karelia." 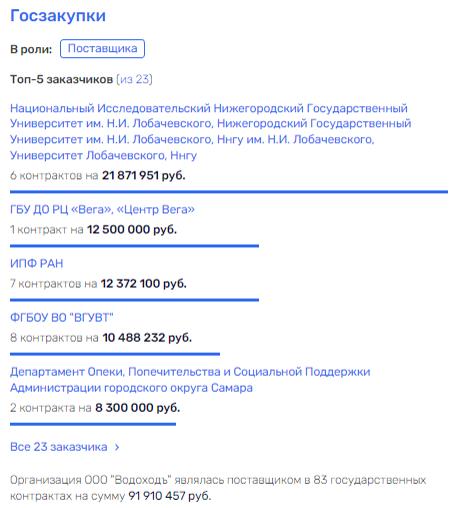 It is embarrassing that almost all of them end up resisting offshore companies, companies that are in foreign jurisdiction. And the profits of companies, including state funds, can be easily withdrawn from our country - and this, among other things, the possibility of non-payment of taxes for hundreds of million rubles.

If we take shipbuilder Rishat Bagautdinov, who, according to rumors, is a longtime friend and acquaintance of both Sergei Frank and Viktor Olersky, the total revenue of companies associated with him at the end of 2021 amounted to 4.1 billion rubles. It has only grown in nearly all recent years.

But the profit compared to such revenue is almost ridiculous. In 2021, it amounted to only 41 million rubles, while a year earlier, the structures brought a loss in general by almost a billion rubles. Is it not worth paying attention to Rishat Bagautdinov and the offices associated with him to representatives of the tax authorities? 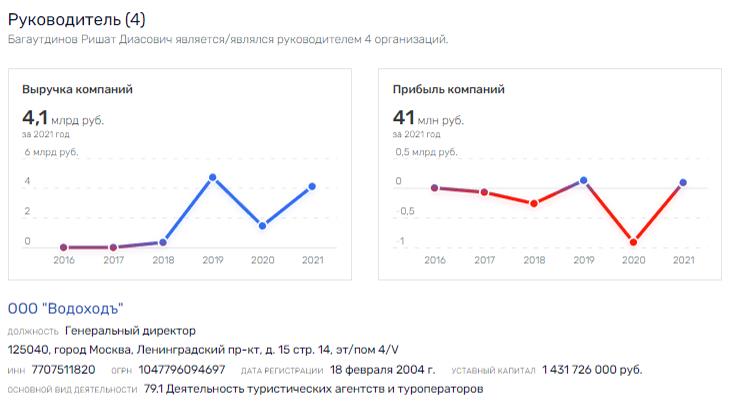 However, it will be very difficult to find ends, because they could spray money on a much larger number of offshore companies. As they say - look for fistulas. There is no direct evidence that Bagautdinov or the same Frank owns Kapstans Holding Limited. But this company in Cyprus has a notable director - Dimo Mladenov Marinov.

He also turned out to be a director of seven more offshore firms, the names of some of which strangely echo Bagautdinov's Paul Rise. Это Pola Logistics LTD, Pola Maritime LTD, Pola Monaco Shipping Limited. 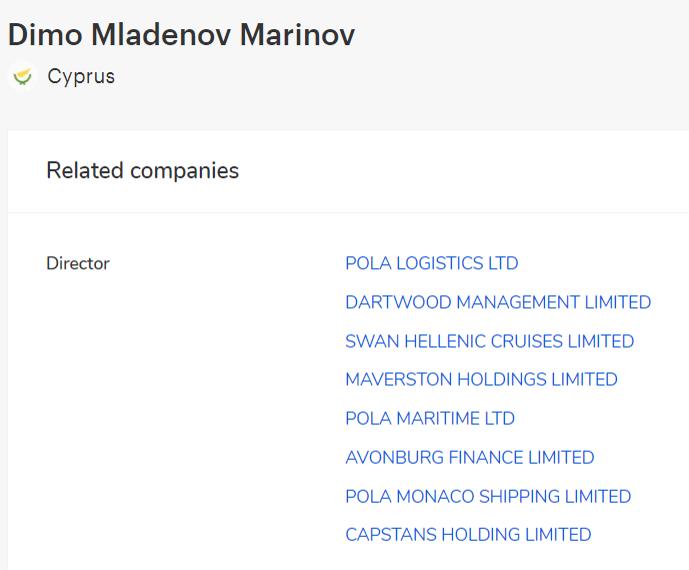 That is, it is much more likely that this group of companies, which belongs to one person, or, again, a group of persons, than the fact that Mr. Dimo Mladenov Marinov is the manager of unrelated structures. It looks like a whole empire that conducts activities and earns money in Russia, but prefers to keep them far from their native shores. Let's repeat, including, possibly, state funds received under contracts with government agencies.

And one of the major Russian corporations, USC, is involved in this whole story, the board of directors of which is headed by Olersky's longtime acquaintance Sergei Frank. It is believed that his time Viktor Olersky could very much help USC get rid of the Finnish shipyard Arctech Helsinki Shipyard Ou.

The sanctions did not allow to attract funding to it, and then Olersky appeared here. Almost immediately after his departure from the Ministry of Transport, it turned out that the shipyard was becoming the property of the cruise operator Algador Holdings Ltd, whose owners called the owners of Nevsky CVD.

Today, according to the Rusprofile service, it is Nevsky CVD that owns this shipyard. Earlier, Kommersant called the beneficiaries of the CVD already familiar to us characters - Viktor Olersky and Rishat Bagautdinov. But if they owned, then not directly, but just through the also familiar offshore company Kapstans Holding Limited, which left the list of owners only in March 2019.

Based on this, we can assume that behind all these companies there is still the same group of people - Olersky, Bagautdinov and Messrs. Franki. Now the head of USC Alexei Rakhmanov can cover them, who allowed Vodokhod to receive a contract for the construction of motor ships.

The question remains - are the successes of the same Vodokhod and other companies the result of the former ties of officials with possible damage to the budget in the form of underpaid taxes? Not to mention the likely violation of fair competition principles. However, when it comes to such a large-scale empire, bringing hundreds of millions and even billions, they think about the state budget last.