"Oblivion" of Ryumin - what information is the head of Rosseti afraid of?

Do Andrei Ryumin defame ties with Andrei Boksha and Pavel Te, and why does information about this disappear from the Internet?

According to sources of The Moscow Post, the head of Rosseti PJSC Andrei Ryumin can take measures to remove information about himself and people who are not friendly to themselves and assets on the network. Allegedly, the official began to be connected too much with some businessmen, and he himself can engage in development outside of working hours. If this were true, such information could damage his reputation.

In particular, they are trying to connect Mr. Ryumin with the beneficiary of the Capital Group construction company Pavel Te. By a strange coincidence, just with the arrival of Andrei Ryumin as head of Rosseti, the company began a large-scale sale of non-core assets, or rather, real estate in Moscow and the Leningrad Region.

Everyone can reap this property, including wealthy developers like Te. According to rumors, it was his structures that acted as a buyer on a number of former Rosseti assets. Meanwhile, according to the authors of the telegram channel CHK-OGPU, Pavel Te is allegedly a man who, back in the USSR, had a criminal record for fraud.

Pavel Te really in the past was a partner of Andrei Ryumin in a number of projects. Another of their partners - Andrei Boksha, recently won tenders for a plot of 60 hectares in the suburbs. It is possible to build several hundred households worth 15-20 million rubles.

Apparently, we are talking about the company Prime Real Estate LLC, where the general director and owner is just Boksha. True, the structure has only one employee in the state - apparently, Boksha himself. The authorized capital is only 100 thousand rubles - the net assets of the structure are estimated at the same amount. This information is available here. 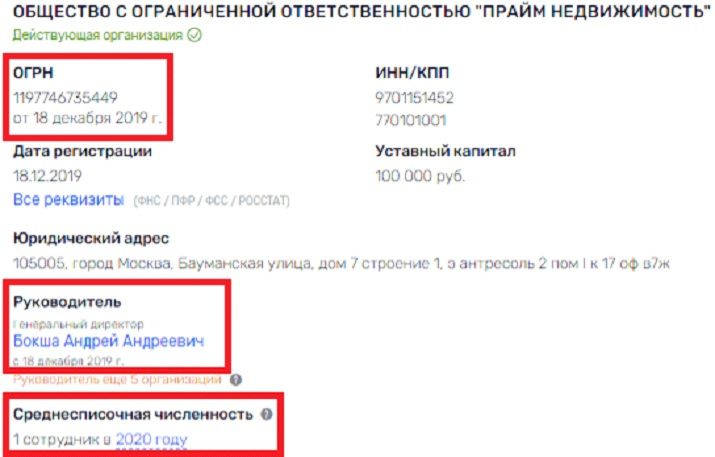 As follows from the screenshot from Rusprofail, the company was founded at the end of 2019, as if specifically for a specific project. Do the structure clearly show signs of fictiousness?

And then Ryumin's ears can stick out. Indeed, earlier the same Andrei Boksha acted as co-investor of Capital Group projects Pavel Te, Eduard Berman and Vladislav Doronin - for example, he owned the companies Promsoyuz and Prime Invest, which were developers of Moscow LCD ILove and Bauman House.

Andrei Ryumin was also one of the co-founders of Promsoyuz and Prime Invest. In addition, Mr. Ryumin still owns Signum Real Estate LLC, where the same Andrei Boksha right now holds the post of general director. And this is just amazing - it is known that officials, and even of such a rank as Ryumin, cannot own and manage a business.

But for some reason there are no questions for Ryumin. Or is it just that people and law enforcement agencies are little aware of his business talents, which could cause possible sweeps of information about Ryumin, Boksha and Te on the Internet?

In this case, "cleaning" is not only necessary. After all, Andrei Valerievich Ryumin is also a 70% co-owner of Savkom LLC, which manages leased or own real estate. One employee works in the company, the authorized capital is 10 thousand rubles. Another "dummy," suitable only for the "distillation" of funds? 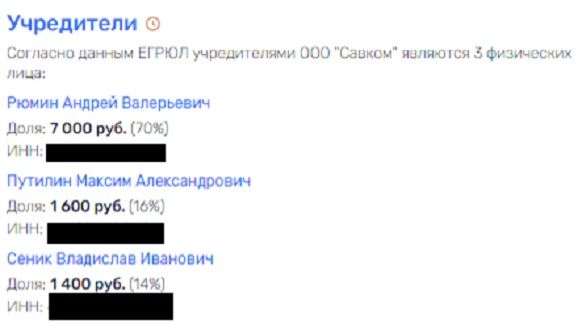 And here is an interesting moment. If Signum Real Estate really looks "empty," then LLC Savkom had net assets worth 45 million rubles. Not bad for a company with a single employee. Revenue is also not bad - 19 million rubles, over 8 million rubles profit. But where did these net assets come from - didn't they belong before PJSC Rosseti?

The next moment: Kommersant sources believe that it was in the interests of Andrei Ryumin that Fort Invest LLC, controlled by Mr. Boksha, won the auction for part of the multifunctional complex on Obruchev Street in Moscow in September. The perimeter of this transaction included more than 14 thousand square meters. m of real estate and a land plot of 2.4 hectares.

In Rosseti, as you probably guessed, they do not comment on this situation in any way - in general. Not surprisingly, officials, especially of such a rank, cannot do business and lobby someone is an obvious conflict of interest and corruption. And isn't this information - including about ties with Boskei, the head of Rosseti Ryumin may want to clean up?

Here is an interesting case - more recently, one information resource tried to cross out the material "Daughters-mother of Andrei Ryumin" from Google's search results under the pretext that our publication simply reprinted information from another site.

Our publication managed to prove that in fact The Moscow Post is the original source, and now the article is again easily discovered in the search engine. We sued the company, which, in fact, tried to shut its mouth to independent journalists, as part of the fight against incriminating resources.

Meanwhile, Ryumin needs not only information about the former business, but also about his affairs in Rosseti, and before that - in the divisions of the state corporation in different regions. Recently, he was awarded the title of "Honorary Power Engineer." The award was presented personally by Minister of Energy Nikolai Shulginov. The latter also noted a large sale of state property - only in Rushydro. My brother-in-law sees from afar.

The loudest corruption story of recent years, which is associated with his name, happened in St. Petersburg in 2018 during the leadership of Ryumin Lenenergo. Then the security forces opened a criminal case on embezzlement during the laying of two cable lines - from the Vasileostrovskaya substation to the Krestovskaya substation - during the construction of the Gazprom Arena stadium in preparation for the World Cup.

The scandal erupted so that the recently appointed Ryumin could fly out of office. They say that he enjoyed the patronage of the then head of Rosseti PJSC Pavel Livinsky, who then in 2021 allegedly and "pulled" him to his position after moving to the Government of the Russian Federation. Then there was no talk of this, but the trouble seemed to bypass Ryumin.

After all, it was not he who fell under the hot hand of the investigation, but his deputy at Lenenergo, Alexei Goryachev. Together with the latter, the deputy chief engineer of the Lenenergospetsremont company was also arrested. They were suspected of embezzlement of 131 million rubles when laying a cable, Kommersant writes.

With the arrival of Ryumin, there was no more order in Lenenergo. Last summer, when Ryumin had already managed to get used to the chair of the head of Lenenergo, the FAS Directorate for the Leningrad Region opened a case against PJSC and the Committee on Tariffs and Price Policy of the Leningrad Region. Antimonopolists believed that the actions of officials jeopardize the existence of LOESK JSC in the electricity market. About this writes Regnum.

The topic of debts does not let Ryumin go. First of all - the debts of PJSC Rosseti of the North Caucasus. They were previously led by Ryumin's predecessor in Rosseti, Pavel Livinsky. And in 2019 alone, the company's losses amounted to almost 10 billion rubles. At the same time, the volume of state contracts of the company exceeds 4.4 billion. The situation in the "subsidiaries" looks the same: losses of Dagestan Network Company JSC amount to 6.9 billion rubles, Dagenergoset JSC - 174 million. 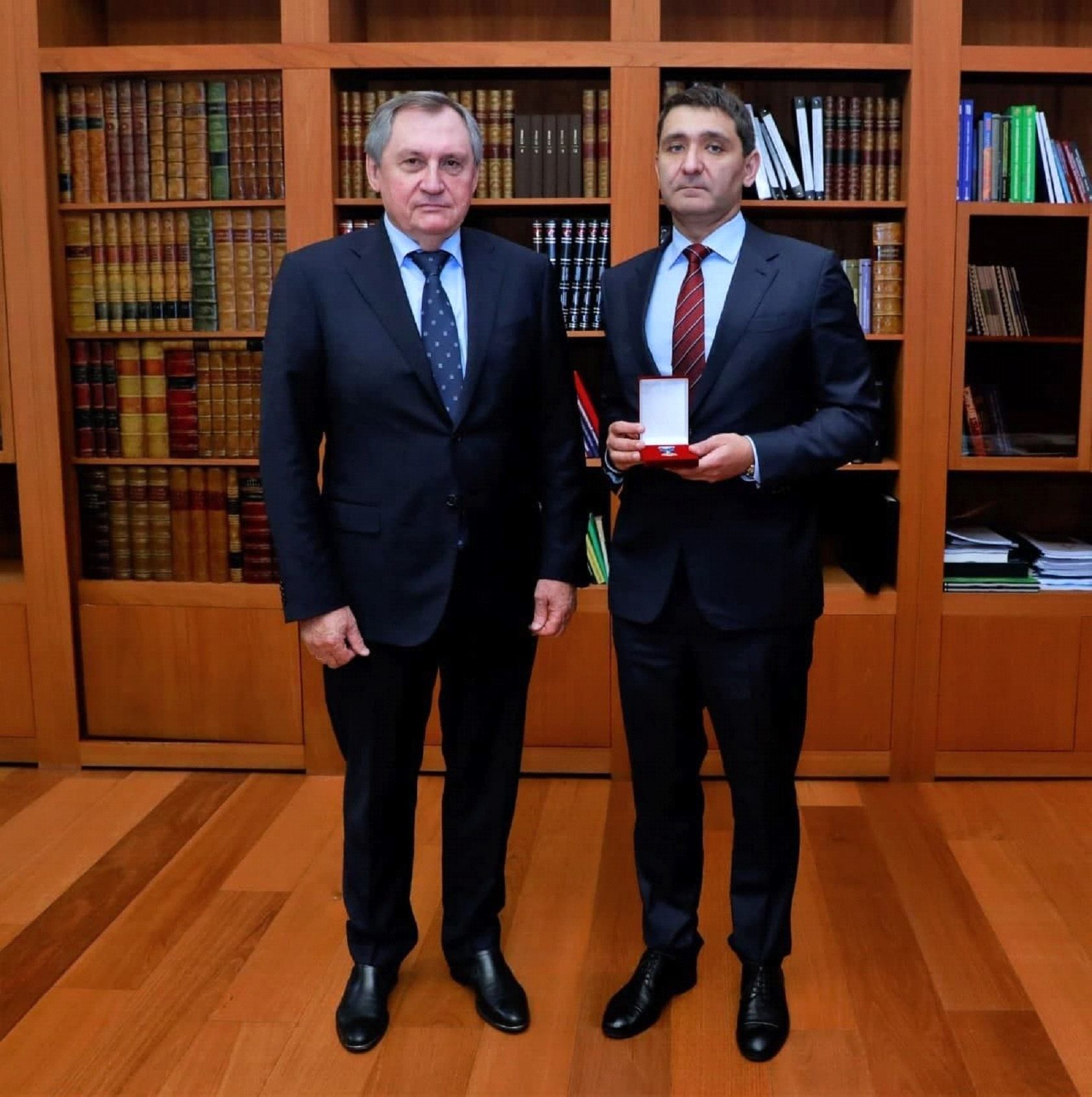 How did Andrei Ryumin decide to solve this problem? Very simple - in no way. Worse, at the end of April 2021, a scheme was broken to restructure the debts of energy retail companies of the North Caucasus owned by Rosseti to the wholesale energy market. About this wrote Kommersant.

The state holding under the leadership of Ryumin actually admitted that he no longer has the funds to ensure full payment of energy by his structures in the North Caucasus Federal District - by the end of the year, as much as 7.4 billion rubles are not enough.

We are talking about the debts of Kabbalkenergo, Karachay-Cherkesskenergo, Kalmenergosbyt, Sevkavkazenergo, Ingushenergo, Dagenergosbyt, Nurenergo and Chechenenergo, which are part of the Rosseti North Caucasus At the same time, money from these structures could be banally withdrawn: as TASS wrote, in March the Ministry of Internal Affairs detained 11 former heads of regional energy companies suspected of embezzlement of more than 10 billion rubles.

So, Mr. Ryumin simply abandoned the networks of the North Caucasus, not having "cleaned up" Livinsky? Apparently, he is very busy cleaning for his own possible business interests. But if law enforcement officers show interest in the situation, Ryumin may not need pure Internet at all.