Not uniform medicines: the construction of the cancer center turned into Repik

A company close to the "chief pharmacist" of the country, Alexei Repik, failed the construction of an oncological dispensary.

In Rodniki (Kaliningrad region), the construction of an oncology center is disrupted. In 2020, the Cancer Center of the Kaliningrad Region concluded a state contract with the Moscow company Patrusko worth 4.6 billion rubles. By November, only 9% of the work was completed. The object, according to the terms of reference, must be commissioned in April 2023 - that is, literally in five months.

The authorities are demanding a penalty from the executor through the court. Previously, they had already sued Patrusco, but the court rejected the claim due to the lack of a schedule of construction and installation work. Although even then it was clear that the deadlines would clearly be disrupted.

The Moscow Post correspondent in the Kaliningrad region found out that a contracting organization that allows itself such freewheeling behavior may be related to the interests of an influential entrepreneur from the pharmaceutical industry Alexei Repik. Which, probably thanks to, among other things, influential patrons in power, gets away with a lot. Details - in the material of The Moscow Post.

Did the mother hand fail to manage?

The Patrusko company belongs to businessman Valeria Daeva and a legal entity associated with her, Vilekoma LLC.

In addition to this office, Daeva owns the structure of R-Pharm - R-Pharm International. The latter is part of the interests of Alexei Repik. In addition, according to Forbes, Valeria Daeva is none other than the mother of a businessman. So all her assets, logically, can be considered family.

Patrusco earned more than 12 billion rubles on state contracts. This means, logically, the supplier must be reliable. Otherwise - what is the point of ordering from him?

Nevertheless, it is known that the company three times disrupted the deadlines for the execution of the contract concluded in June 2019 for the construction of the Kostroma Oncological Dispensary OGBUZ, and it also did not always pay fines for this.

And still, in 2021, even Kostroma signed another contract with Petrusko for the preparation of design documentation, the implementation of engineering surveys and the construction of another OGBUZ "City Hospital of Kostroma."

Drank with a claim to creation

Among the customers of the office is the Ministry of Construction of the Moscow Region. The last two contracts that the department concluded with Doeva's company were terminated in the middle of their execution. Moreover, it is interesting that these were contracts for the same service, namely: "Implementation of author's supervision at the facility:" Treatment building for 190 beds of the Dubnenskaya city hospital on ul. Karl Marx, d. 30 in Dubna, Moscow region. " 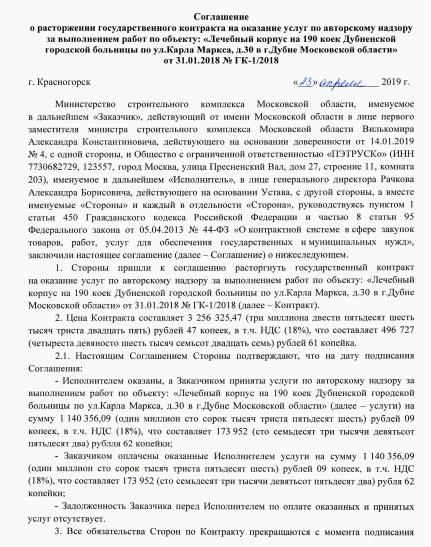 In total, Patrusco received 3.5 million rubles for these two contracts. But both of them were terminated by agreement of the parties without any mutual claims. Moreover, interestingly, the full cost of the contract was actually paid to the contractor for work on the latter. And it was terminated after the expiration of its execution. Another "cut" with a claim to creation?

Something strange is going on with Patrusco's finances - in 2021, the company reduced revenue by about 800 million rubles. Her profit went into negative indicators. 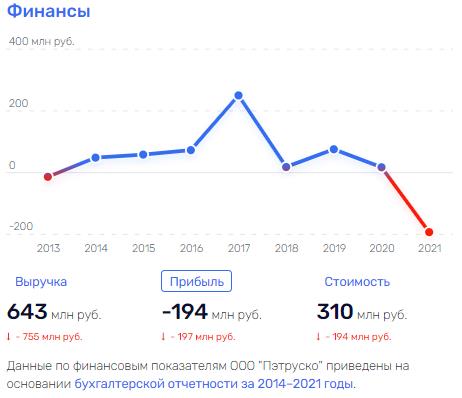 At the same time, according to Rusprofile, eight state contracts of the construction company are under execution. Only now, judging by what is happening at the construction site in the Kaliningrad region, customers are unlikely to wait for the result on the obligations taken by Patrusco.

In an unenviable position and other offices of Mrs. Daeva. The same "R-Pharm International," in fact, is pledged to the state corporation VEB.RF. And the LLC "Ar-Pharm" issued for Daeva in the minus for 18 million rubles. 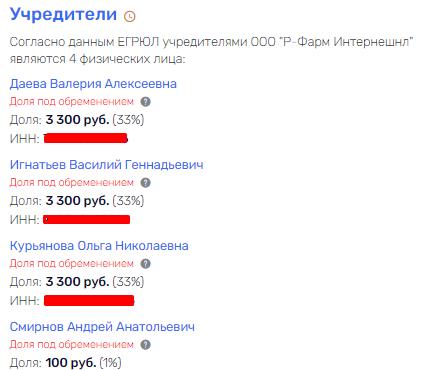 The shares of the founders of R-Farm International in the pledge with VEB.RF. Photo: https://www.rusprofile.ru

With greetings from Golikova

Alexey Repik is known on the market primarily as the owner of the pharmaceutical giant R-Pharm. (he recently rewrote his share to several individuals, among them his mother). It is believed that he is secretly patronized by the Deputy Prime Minister of the Russian Federation Tatyana Golikova. Allegedly, thanks to her efforts, the company was one of the first to receive registration for its own drug for the coronavirus "Alario-TL." Now its average price is 5.5 thousand rubles. At the peak of COVID-19, this cost was two or even three times higher.

During a pandemic, when people were ready to spend any funds in order to protect themselves from a terrible disease, Repik's company earned extra money. Only here we did not find a single positive review of it on the Internet... According to rumors, R-Farm "fed" people with ordinary "dummies."

And in 2019, Repik's company supplied Sevorana, an analogue of the American one, which could essentially be the same medicine in a more expensive package.

Mr. Repik is one of those businessmen who escaped criminal liability for organizing a monopoly and receive an unthinkable number of preferences from the Ministry of Industry and Trade.

Like the construction Patrusco, R-Pharm has repeatedly disrupted supplies - including vital HIV drugs. Well, as with so many scandals, you can't suspect that someone is covering Repik. Any normal customer would have long ago severed cooperation with such an office, but Repik's companies continue to receive fat government orders.

Apparently, Golikova introduced Repik to the right people. The spheres of construction of medical facilities and the production of drugs, after all, echo.

Classics of the genre

At the same time, many companies associated with the interests of Repik have offshore companies as part of their founders, where customers' money can flow. Therefore, obligations are not fulfilled? The most commonplace example is where budgets are directly distributed to a partially offshore company, which is affiliated with Repik - Eapteka LLC. It is registered with the Cyprus ANESTOZO LIMITED, which does not bother either the institution of the Ministry of Health of the Moscow Region or the Ministry of Culture of Russia, which order reagents and solutions from it. 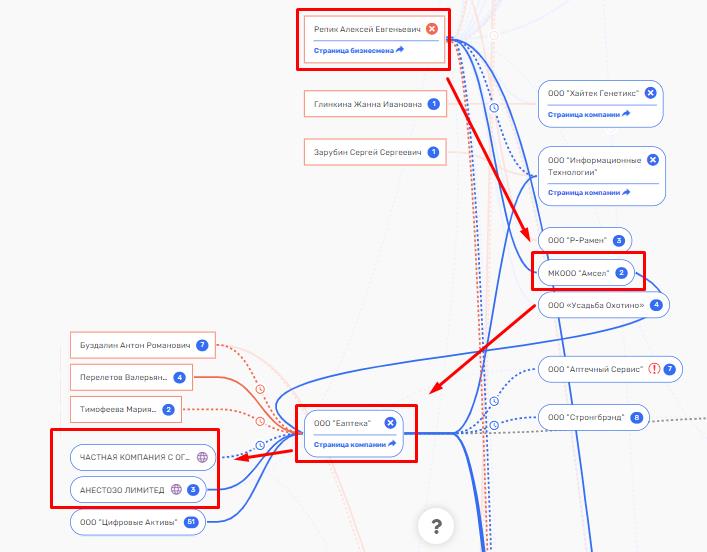 Taking into account the current situation of companies of the Repik family, there is a suspicion that soon he may begin to massively bankrupt enterprises, leaving his "state financiers" without funds and product. This applies rather to non-core assets of the entrepreneur, which are partially registered with his mother. We assume that the pharmaceutical industry will be Repik's "cash cow" as long as there are people who are ready to promote his business in government agencies.

31 May, 8:16
Without a corner on the Patriarchs: Hotel for the Deputy Prime Minister, and what does Tatyana Golikova have to do with it