Not "McDonald's" one, or Khotimsky undercover

Apparently, Sovcombank is pledging not only McDonald's. Under the cover of the Ministry of Economy in a credit institution, loans can be issued without a passport, "horse" interest, it is not known where the debts came from - our readers write.

The epic continues with the deprivation of apartments by Sovcombank Dmitry and Sergei Khotimsky. Our editorial office received another letter in which the reader talks about how he is deceived in order to obtain real estate. At the same time, citizens fighting too zealously for their rights are allegedly offered money for silence. In the story that has already become a parable, the correspondent of The Moscow Post understood.

As we wrote earlier, Sovcombank is not implementing a transparent scheme for the distribution of loans, as a result of which many people (mainly those with tight finances - large families, single mothers, sick people, and so on) remain on the street, deprived of only housing.

What is most interesting, the competent authorities - from the Prosecutor General's Office and law enforcement agencies to the Central Bank and the Ministry of Economic Development, do not try to influence the situation and, despite numerous appeals to them, either do not respond at all, or write replies, or redirect questions to other departments.

According to our source, the fact may be that Pyotr Zaselsky, a former employee of Sovcombank, served as one of the deputy ministers of economic development of the Russian Federation from December 26, 2018 to March 2021. Does this mean that Sovcombank has long been at odds with the Ministry of Economic Development and the Khotimskys have "their own people" there? 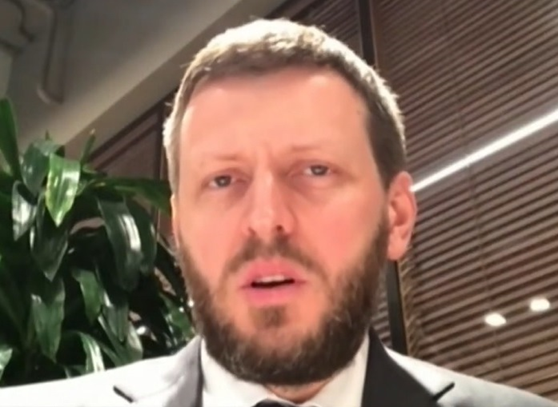 Peter Zaselsky is "his man" for the Khotimsky brothers. Photo: "Regnum"

The appetites of the Khotimsky are off scale

The documents and audio files provided to us contain as information that, despite the agreed rate of 27.9% per annum, the bank actually takes all 61.3%! So the fact that the bank for some reason does not know anything about the loan - this is how the victim was allegedly told on the hotline.

At the same time, a couple of years after the conclusion of the agreement and the monthly fulfillment of credit obligations, the woman allegedly received a notification from Sovcombank that she had almost four million debts to the bank! At the same time, as the applicant writes, the size and structure of monthly payments has nothing to do with the formula for calculating them. She wrote about all this in an appeal to Rospotrebnadzor, demanding the protection of violated rights. 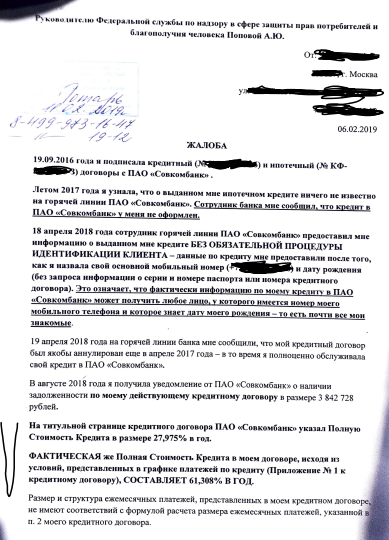 Letter to Rospotrebnadzor. Photo: Courtesy of The Moscow Post reader

How the debt formed is a mystery. There is a possibility that the bank resold the loan and bought it back in such a way as to shift the timing of payments, and since every day of delay can cost "horse" interest, these millions "ran" in penalties. At the same time, the client was informed only when the amount was gigantic. These are all assumptions, but based on the information that we receive from the victims.

In addition, the woman wrote that the loan was issued simply according to the phone number and date of birth - it means that any person who knows this data can easily dispose of the loan, but the bank does not care! 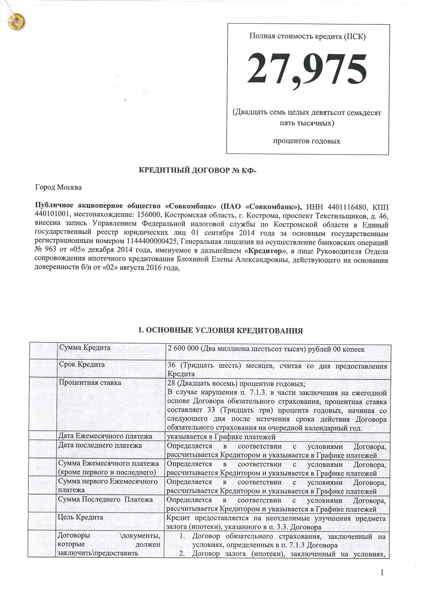 The loan agreement is allegedly 27.9%. Photo: Courtesy of The Moscow Post reader

Rospotrebnadzor refused to deal with the issue, citing the fact that they could not give a legal assessment of the events presented and advised to go to court - in general, as in most other departments where the woman turned. 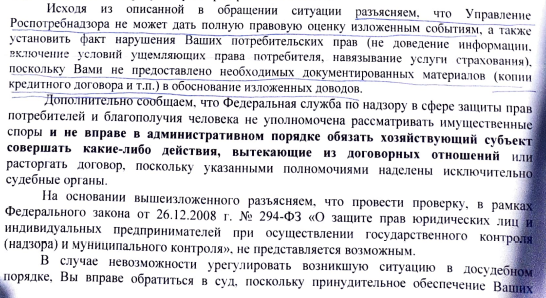 Soon the woman sent a complaint about the actions of employees to their head - the head of the Moscow department, Elena Andreeva. Apparently, I did not receive an answer. 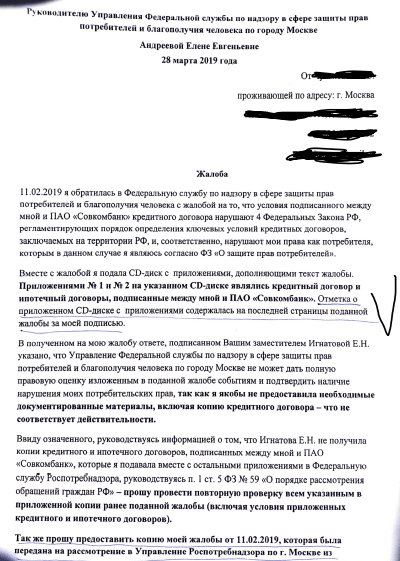 Sovcombank and its friends

Back in June 2017, a woman tried to get out of a hole dug by Sovcombank. She decided to refinance the loan at another bank. But - as follows from the letter, it did not work out very well. She turned to the organization, which brought her to Sovcombank - to Artego Finance, which greatly delayed the procedure. As a result, everything remained as it was. 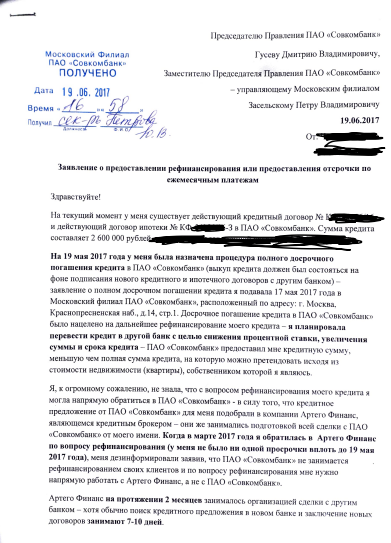 Attempt at refinancing. Photo: Courtesy of The Moscow Post reader

We have already written about "Artegofinance" and other similar organizations. According to our readers, credit brokers from this cohort lure people to Sovcombank and carefully, as they say, put a pig in them in the form of giant interest on the loan and for delays. The loan is secured by an apartment, which is assessed by their people, and is estimated at times cheaper than its real value. In restructuring - refuse, in the deferral of payments - too. 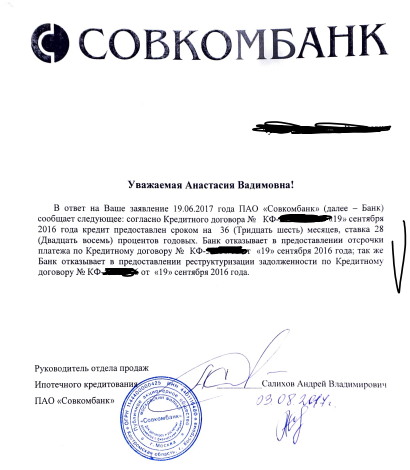 Denial of refinancing and deferred payment. Photo: Courtesy of The Moscow Post reader

Attempts to "hush up" the case

Despite the fact that not a single appeal to the state authorities has yet brought serious results, Sovcombank, apparently, became worried about the initiative of the victim. First, she received a letter in which the adviser to the chairman of the board of the bank Mamatkazin reports that from the master's shoulder it was decided to terminate the court proceedings against the woman. Apparently, it was initiated in order to pick up the apartment. 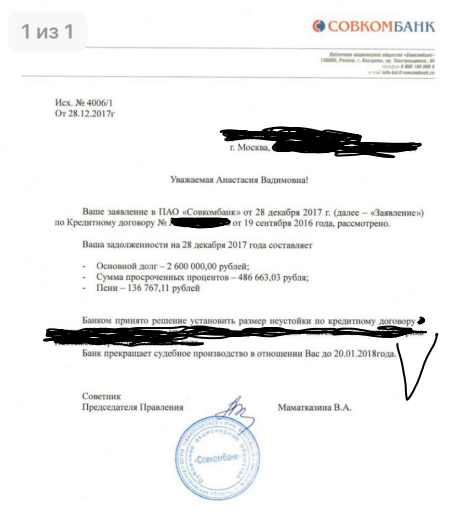 From the master's shoulder from Sovcombank. Photo: Courtesy of The Moscow Post reader

After that, they openly told her that the woman had no way out of the situation and asked how much money was required for her to stop contacting law enforcement officers. To prove, we are provided with audio recordings of the conversation that are at the disposal of the Editorial Board.

According to the applicant, Yegor Strak offered the money. The one that is the founder of Artegofinance.

Perhaps all this in a row: Sovcombank - Artegofinance was already ready to stop pulling money and an apartment from the victim, in order to continue to deceive other citizens who are less zealously fighting for their property. According to the information that sources provide us - there are already more than 1000 of them!

Where apartments and money flow

As the correspondent of The Moscow Post managed to find out earlier, apartments can be sold through Mosstroymehanizatsiya-5 JSC, which is currently undergoing bankruptcy proceedings, and money can be withdrawn to numerous offshore companies, to which brokerage and other companies allegedly cooperating with Sovcombank are tied.

Some of the organizations directly related to Sovcombank today or in the past are somehow related to offshore companies. For example, in the structure of the founders of BTB, in addition to Sovcombank, which left the company in 2020, the Cypriot CAPALTARS ENTERPRISES LIMITED is listed.

In addition, Sovcombank is famous for its "absorbing" ability - over the years of its existence, it has managed to "take over" RosEuroBank. According to information from the official website of the company, in 2021 he acquired the National Factoring Company Group of Companies from the Financial Corporation NIKoil, and also closed the deal to buy back shares of Vostochny Express Bank and Metlife Insurance, which he renamed Sovcombank Life.

The bank also showed interest in the Asia-Pacific Bank, the largest private bank in Siberia and the Far East, and many others. According to Rusprofile, more than 150 organizations are associated with Sovcombank.

Just the other day, Sovcombank got into the information field in connection with the deal to buy McDonald's. According to the author of The Bell magazine (recognized as a foreign agent in the Russian Federation), allegedly "Sovcombank, which fell under US sanctions, probably participated in the deal to sell the McDonald's chain in Russia to businessman Alexander Govor."

"The alleged participation of Sovcombank became known from the agreement on the pledge of property rights, which the credit institution concluded with the Club-Hotel company (through it Govor acquires McDonald's). Journalists found it in the SPARK system. After a request from the BBC, the information about the pledge was removed from the website of the Federal Notary Chamber, from where SPARK, among other things, collects data. Sovcombank said it "did not provide financing for the purchase of McDonald's," and a McDonald's representative in Russia called the publication a "technical error."

But the Khotimsky are not enough, and they decided to take up squeezing apartments from ordinary people? I do not want to believe that such a scam is covered at the state level. Perhaps the organs are just dragging their feet in order to collect more facts? We hope to soon see the Khotimsky brothers not in Monaco, where many of their colleagues left.