Not all Kerimovo that shines

The family of the chairman of the Legislative Assembly of Dagestan, Zaur Askenderov, close to Suleiman Kerimov, has expanded the alcohol business. "Business lines" are resting.

The people of Suleiman Kerimov are not afraid of anything at all and penetrate into more and more sectors of the economy, despite the numerous scandals with a criminal heart.

The Alvisa Group of Companies, controlled by the family of a two-time State Duma deputy from Dagestan, Zauru Askenderova, announced the start of production of alcoholic tinctures under the recently acquired Kinovsky brand.

Askenderov is a longtime friend and associate of Senator from the same region Suleiman Kerimov, whose people continue to master more and more spheres of the country's economy - construction, metallurgy, betting business, and now the alcohol market.

As one of the most scandalous billionaires of the country builds his empire, weaving politics and business - in the material of the correspondent of The Moscow Post in Dagestan.

Alvis Group is 99% owned by the brother of the former deputy of the VI and VII convocations of the State Duma from Dagestan, and now the chairman of the Legislative Assembly of the Republic Zaur Askenderov.

Kerimov and his friends Askenderov had the opportunity to start expanding into the alcoholic beverages market after a number of foreign brands of whiskey and other drinks left Russia. For this case, the Alvis Group of Companies is already preparing a new production site in Dagestan: apparently, it will become a brandy factory in the Derbent district of the Republic, the construction of which began in 2021.

The funds of the structures are close to Kerimov, apparently, have not been very dense lately. Maybe that's why all 100% of the shares of the main producer of the alcohol group, LLC Alvis, are pledged by the state bank VTB? That is, the money seems to be borrowed.

In Dagestan, the project will definitely not have problems - despite the fact that Kerimov's friend and associate Zaur Askenderov, clearly not without the approval of the same senator, heads the Regional Assembly.

According to evil tongues, allegedly Kerimov and Askender could have undeclared real estate in Monaco and even settle down with neighbors. No one would be surprised, because Kerimov brings faithful people closer.

Earlier, Zaur Askenderov and another likely "special veteran" Kerimov, ex-general director of his former company Nafta Moscow Tatyana Bashmakova took part in the scandal with the redistribution of equity capital of the famous company Business Lines.

As they wrote in the media, behind the dispute between the two co-owners of the structure, Mikhail Khabarov and Alexander Bogatikov, there was a battle between two financial and industrial groups. Khabarov is a native of Alfa Group, and Suleiman Kerimov's people were just behind Bogatikov.

During interrogation in the UK, Alexander Bogatikov admitted that he turned to the people of the influential senator Suleiman Kerimov for "patronage and support" and "resolving the issue" with law enforcement agencies in exchange for a stake in the company. This eventually led to an escalation of the conflict over the right to own Russia's largest cargo carrier.

Back in 2014, the Federal Tax Service suspected businessman Bogatikov of tax evasion, the assets were frozen, and the merchant was put on the wanted list. According to the Company, it was Zaur Askenderov who helped rid Bogatikov of arrest in 2017.

For this, the former business partner of the deputy Askenderov Grigory Gurariy received 12.5% in Business Lines. Askenderov and Guraria had a construction company Cosmo Plus in Khimki. Mikhail Khabarov called Gurariy the Askenderov denomination in the LCIA.

And one of the new shareholders, clearly representing Kerimov, was Tatyana Bashmakova, who got 12.5% of Business Lines. After the appearance of these shareholders, Mikhail Khabarov lost an option in the company for 30% worth $180 million. 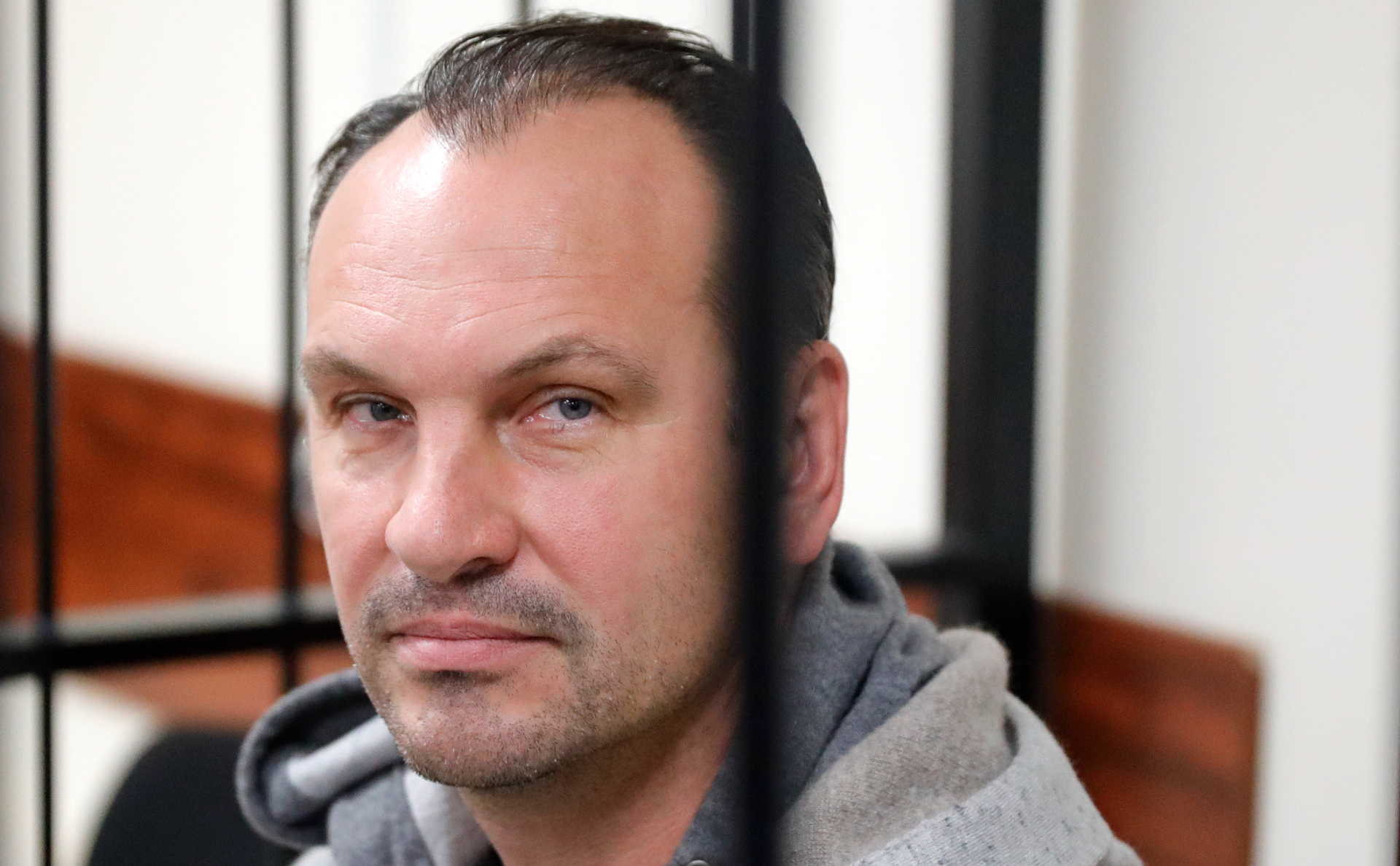 Mikhail Khabarov was behind bars at the suggestion of Kerimov because of his unwillingness to give a share in business? Photo: Mikhail Dzhaparidze/TASS

And then everything turned upside down - Khabarov, who at that time was the executive director of Trust Bank, was arrested after contacting Bogatikov at the Moscow Investigative Committee. He was suspected of embezzling $900 million from a former partner.

That is, with the possible support of Kerimov's team, Khabirov suddenly turned out to be in the pre-trial detention center instead of Bogatikov, who was suspected of tax evasion for more than 1.5 billion rubles.

It must be assumed that Askenderov helped Kerimov on many other important issues. Their names glowed in a loud scandal with money laundering in France - just then Suleiman Kerimov himself needed help in his release.

Recall that in 2017, Kerimov was detained at the French airport. The senator was accused of tax evasion when buying luxury real estate on the Cote d'Azur, as well as money laundering. About this wrote "Version."

Some argued that David Kaplan, a business partner of the Magomedov brothers, could have been an intermediary in transferring information to French law enforcement officers. Today, the Magomedovs themselves - Ziyavudin and Magomed are accused of a whole series of crimes in Russia, they are "shining" twenty-year sentences.

Subsequently, France withdrew its accusations against Kerimov - they simply could not be proved. And the case itself did not go anywhere, Kerimov remained in it in the rank of a witness, although he quickly retreated to Russia.

At the same time, even before this high-profile story, in 2013 it turned out that the then State Duma deputy Zaur Askenderov was the managing partner of a legal entity registered in France, the civil society for property management (SCI) Jennet, Izvestia reported. 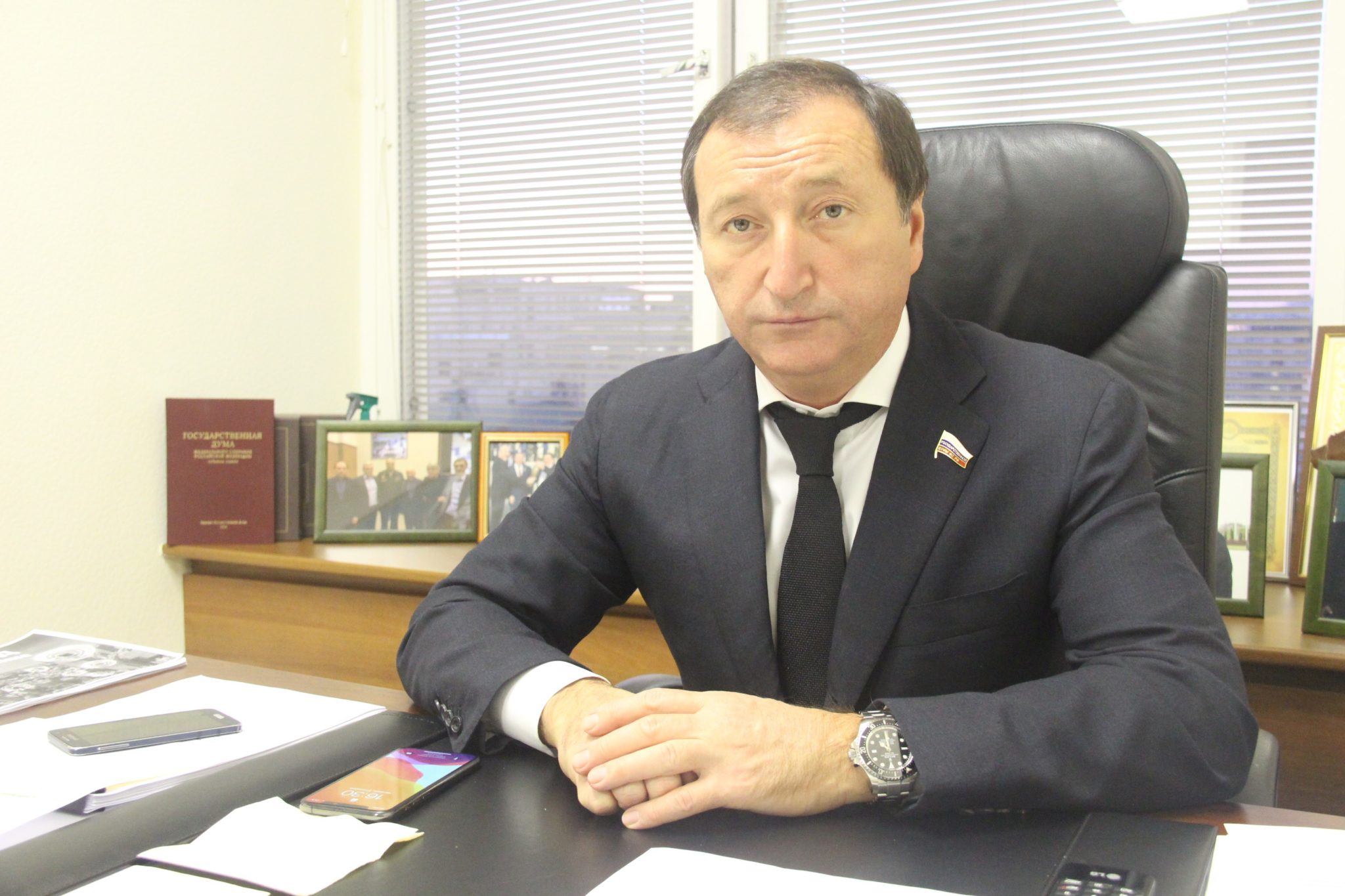 Zaur Askenderov, previously seen in managing foreign business - one of the main associates and lobbyists of the interests of Suleiman Kerimov? Photo: derbend.ru

The special service of the French Ministry of Finance TRACFIN, which deals with money laundering, has repeatedly called SCI one of the most convenient forms of "washing" offices.

Even if we do not take into account the possible "laundering" of money by a person from Kerimov's team in the country, where the latter was suspected of "laundering" money, the State Duma deputy's business management itself does not correlate with Russian laws. But the people of Kerimov seem to be able to do everything.

Kerimov puts on his own

At the same time, little is known about the past of the former State Duma deputy Zaur Askenderov. Askenderov's entry into the big stage of politics and business took place just at the time when the current senator himself rose to the peaks - around 2003.

Then Askvenderov is not aware of how he took the post of commercial director of the wine and cognac plant in Mineralnye Vody and the general director of Cosmo Plus LLC in Khimki, which was engaged in the construction of buildings - that is, to what Askenderov had presumably had nothing to do with before. And also - the restaurant business of Lachunga LLC, which later became the property of his brother Renat Askenderov - another pillar of the family's business empire.

It can be assumed that even then Zaur Askenderov was a "special student" of Kerimov, who does not keep all the eggs in one basket, but loves to "shove" assets in different pockets. As a result, Zaur moved to the State Duma, where he worked hand in hand with Kerimov and his people, and left his brothers "in business."

As for Renat Askenderov's brother, until April 2022 he had a stake in the sixth largest bookmaker in Russia, Betsiti. As you know, Kerimov has huge interests in this business. And the ex-general director of Suleiman Kerimov's Nafta Moscow company, Tatyana Bashmakova, from 2018 to October 2021, was a co-owner of 15% of the First International Bookmaker's Office (PBMK, the League of Stakes brand).

Until October 2021, the co-founder of the PMBK was the X-Em-El-Vi LTD offshore company from the UK. Then, until May 2022, part of the company was registered with another offshore company, already from Switzerland - Kazako AG. Just in these two countries, not counting Monaco, it is believed that Suleiman Kerimov spends the lion's share of his time. After, in the summer of 2022, another British offshore company, KKML Holding LTD, left the owners. Is it necessary to look for all the money from the betting business of Kerimov's people there? 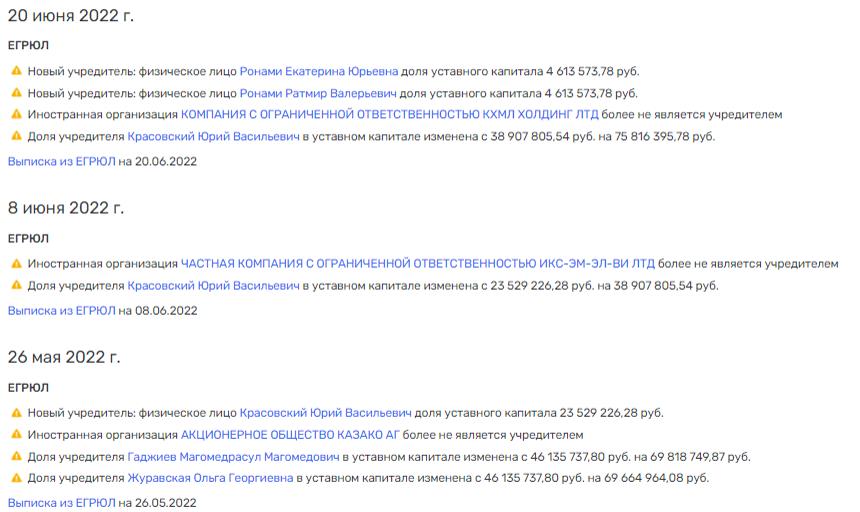 Apparently, the betting business began to attract too much attention to Kerimov, so Renat Askenderov and Tatyana Bashmakova could decide to rewrite their shares on people less noticed in ties with the senator. Well, the flow of money offshore, apparently, put an end to the sanctions of the West, in whose countries so many scandals are associated with the name of the senator.

In close conjunction with the bookmaker and other businesses, Suleiman Kerimov, as you know, has an advertising business - the main engine of the "bookmaker" trade. Kerimov also has huge interests there. So much so that he allegedly tries to crush almost all the associated cash flows in the country.

Kerimov is credited with lobbying for the scandalous law on the "Single Operator of Digital Advertising," which turned out to be so scandalous that the administrative, financial and lobbying capabilities of Kerimov's group did not help push it through the State Duma. Too much he violated the balance of interests - yes, he actually destroyed this market, leaving only one real player on it.

According to the initiative, a single Russian operator should manage and control all advertising screens in the Russian Federation. Advertisers and operators of advertising systems must provide the service with data on Internet advertising after 20 calendar days from the date of its appearance on the network.

Earlier, the project was criticized by the FAS, the Union of Outdoor Advertising Operators and the head of the Ministry of Digital Science Maksut Shadayev due to the monopolization of the advertising market.

Advertisers call the project the actual destruction of this very market. It's all about the criteria by which only one office is suitable for the title of a single operator - one of the largest outdoor advertising companies in Russia, Russ Outdor, which can be covered by the interests of Kerimov.

Since 2019, the director of the holding has been Robert Mirzoyan - as it is believed, another Kerimov person. Earlier, he was declared bankrupt, and tried to bankrupt the Vera-Olympus company, which he co-owned.

However, somehow Vera Olympus, which is in debt and loss, with Mirzoyan at the head, bought a large stake in Russ Outdor. What, however, is known - the money for the purchase was given by the family of Suleiman Kerimov. RBC wrote about this. And who pays, the young lady and dances, as you know. And just under it, a bill on the "Single Operator" appeared - Mr. Senator was used to repelling his investments. 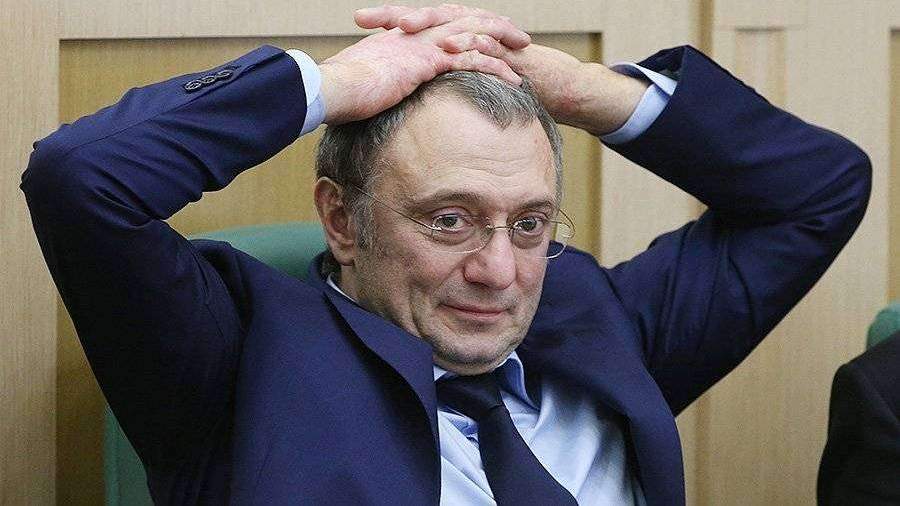 This time Suleiman Kerimov tried to bite a piece that he could not swallow? Photo: Zurab Javakhadze/Izvestia

And the fact that this can go to the detriment of all other market players, and more broadly - the state as a whole and people, as end consumers, is unlikely to think about it at all.

However, not all Shrovetide's cat, and Kerimov's impudence begins to cause serious opposition. Just today, the scandalous bill on a single digital advertising operator, which slipped through the first reading, was postponed after a series of indignations on the sidelines and shouts from control and supervisory authorities. This suggests that Kerimov, after all, is not as omnipotent as he, apparently, is used to counting himself.