The beneficiaries of the Redsys IT company, Vasily Vasin and Sergey Gordeev, remain in the shadow of the scandals with the Ananyev brothers. Redsys is the second "favorite wife" of the PFRF after Technoserv. It seems that billions of budget rubles received under dubious state contracts could be stolen from it.

Scandals continue to appear around fugitive bankers, former co-owners of Promsvyazbank and Vozrozhdeniye of the Ananyev brothers, as well as their surroundings. As the correspondent of The Moscow Post reports, another criminal case has been opened against Alexey Ananyev - he was suspected of paying bribes to the heads of departments of the Pension Fund of Russian Federation (PFRF) for patronage when concluding state contracts.

And one of the key contractors and recipients of state contracts from the Ananyevs was their  Technoserv company. However, for some reason, another asset associated with the Ananyevs in the past remains in the shadows - the IT company Redsys. This company and its key beneficiaries, entrepreneurs Vasily Vasin and Sergey Gordeev (not the one who owns the "Peak", but the other, with the patronymic Yevgenyevich) could leave traces no less than Technoserv and the Ananyevs themselves.

Redsys was the largest provider of the Pension Fund out all IT and not only IT companies. Now it has contracts worth almost 18 billion rubles, a good half of which are with the PFRF. And the firm received these contracts when the controversial Anton Drozdov, now Deputy Finance Minister, was at the helm of the PFRF.

He himself remained clean, but his Deputy Alexey Ivanov was arrested in the summer of 2019 on suspicion of bribery. This was reported by Kommersant. Many still believe that he could have become a "whipping boy", while Drozdov allegedly remained in the shadows. 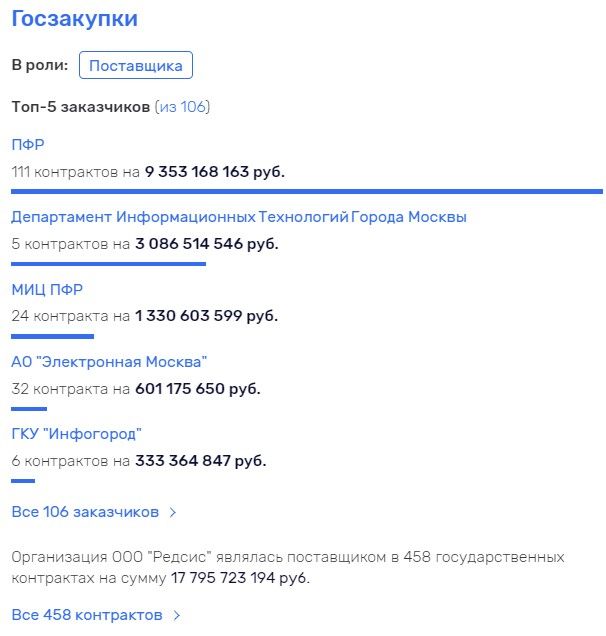 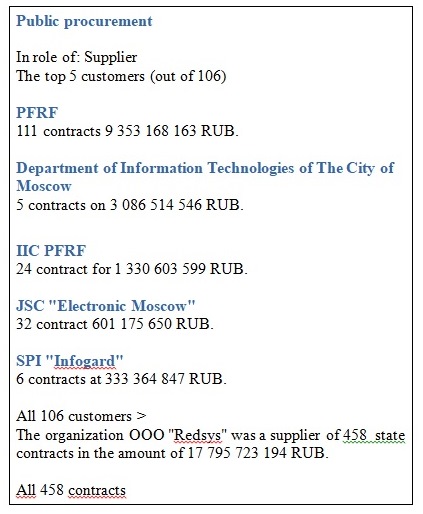 Today, this company also appears in a criminal case. RBC wrote about this. Allegedly, Redsys could "bring" Drozdov's subordinates, receiving victories in delicious tenders for billions of rubles at the exit.

Vasily Vasin, an entrepreneur from Bryansk, was the key owner of Redsys. In 2016, Vasin left the company's capital - it became the property of the Cyprus offshore company Ralieva Management LTD, which still owns it.

It seems that Vasin was trying to cover his traces and get himself and Sergey Yevgenyevich Gordeyev, who was also named by the rumour mill as the alleged beneficiary of the company, out of possible harm's way in the future. It is likely that both continue to control the structure, remaining in the shadows. What is the current state of the company?

At the end of 2019, that is, just before the "storm" with a new criminal case, the company's loss amounted to 1.9 billion rubles with revenue of 1.3 billion. The value of assets is minus 1.2 billion rubles. Taking into account the past success of the structure and the volume of state contracts, it is likely that money could be withdrawn from Redsys. To the same Cyprus offshore.

"Shared" not in brotherly way

At the same time, the share of Ralieva Management LTD, which owns Redsys, is still pledged to Promsvyazbank, which previously belonged to the Ananyevs. However, there is a more important detail. Previously, the Redsys company belonged to businessman Vyacheslav Rudnikov, and got to Vasin and Gordeev under strange circumstances. It may well be banal "squeeze".

Vasily Vasin was a partner of Vyacheslav Rudnikov in another structure - R-style. It also included Redsys. However, in 2011, Vasin persuaded Rudnikov to attract new investors to the holding, Sergey Gordeev was among them. After that, Rudnikov was slowly squeezed out of the company's capital.

As Vyacheslav Rudnikov himself said, Vasin convinced him that the new partners were decent businessmen. As a result, he was persuaded to sell a significant share of the company - 45%, which appeared under the control of Sergey Gordeev and one of his partners. This was reported by the portal Sovershenno Sekretno.

In the end of a series of actions when partners played on Rudnikov's trust (recall, Vasin is his cousin, he didn't expect a trick from him) through offshore business and dubious personalities, Gordeev and people close to him appeared to have not 45% but 50% of the structure and  Vasin through his RegalitservicesLTD got 17%.

Further "squeezing" of Rudnikov was a matter of technique. He soon became a minority shareholder and lost real control of the company. Left out of business. The scheme resembles a creeping unfriendly capture, though arranged in more neutral colours.

Rudnikov also communicated with our publication. In the material he wrote for The Moscow Post he also told  about other exploits of Vasin and Gordeev. For example, that they allegedly acted in such a way as not to pay him the real value of his stocks in R-style. In addition, these same gentlemen could presumably be involved in the problems of the KS-Trust company. Which, according to Rudnikov, in 2014 was subjected to a serious raider attack. Among other things, Rudnikov says in plain text that he considers Vasily Vasin and Sergey Gordeev to be the main persons involved in the attack on him personally.

Let's look at other structures that Vasin is associated with. And there are a lot of interesting things. He is the founder of 26 offices at once, some of which, according to the value judgment, have signs of fictitiousness. The vast majority of them have already been liquidated, or are at the stage of bankruptcy, or are under the control of a bankruptcy trustee.

Like, for example, Aktera LLC, which deals with investments. At the end of 2019, the company did not receive any revenue, but went into profit by more than 90 million rubles. At the same time, the value of assets is in the deep minus by 37 million rubles. Is this one of the intermediaries through which the budget billions received from the Drozdov's PFRF could be withdrawn?

As for Sergey Yevgenyevich Gordeev, he was less productive, established only three offices. One of them is still active, SSK ECO LLC. Financial statements are not available. The company has only 20 thousand authorized capital. But, according to Rusprofile for 2019, the structure did not paid a penny of contributions (e.g. to PFRF).

This may indicate that no one works in it. Is it needed in order to use it as an inermediary? Or, another option, Gordeev simply does not consider it necessary to transfer money to the Pension Fund for his employees. Is PFRF the place where funds can only "be taken"?

Important detail. If Redsys really received contracts for bribes, and it could be assisted by employees of the PFRF under Drozdov, then in 2019, after the detention of Deputy Drozdov Alexey Ivanov, they apparently decided to play back. There was an attempt to bankrupt Redsys. However, not from the PFRF directly, but through the Federal Tax Service. Fontanka wrote about this. According to another version, the bankruptcy attempt could have been fictitious and initiated by the owners themselves in order to hide some fraud.

In any case, nothing happened, as well as "squeezing" out of "Redsys" any decent funds for the previous holiday of life. It is unlikely that the company and those behind it would have been able to do this without serious patronage in the government structures. They could have such patronage not only through the PFRF.

After all, the Moscow city hall was the second largest customer of Redsys. Or rather - the Department of information technologies of the capital, which is headed by a very odious official Eduard Lysenko. According to rumours, a big fan of "getting" lured structures to state tenders.

The Department has SPI Infogorod under its control, which so long ago was headed by Andrey Dzengan  who is loyal to Lysenko. However, in the summer of 2020, during the pandemic, the SPI and Dzengan himself became notably scandalized. He was fired. It's all about the app "Social monitoring", for which the mayor's office paid as much as 180 million rubles. According to Oktagon, the program constantly failed, while managing to write out fines of more than 200 million rubles. A real "feeder".

However, Dzengan was not "removed" far. Soon the same city hall created an autonomous non-profit organization named Digital Transformation, where Dzengan was put to work as a Director. And the main difference between the ANO and the Department is that it is not formally a state structure, and it does not need to report on spending as the Department reported. You can make your own conclusions about why Dzenghan was moved from one place to another, and what they can do there now. 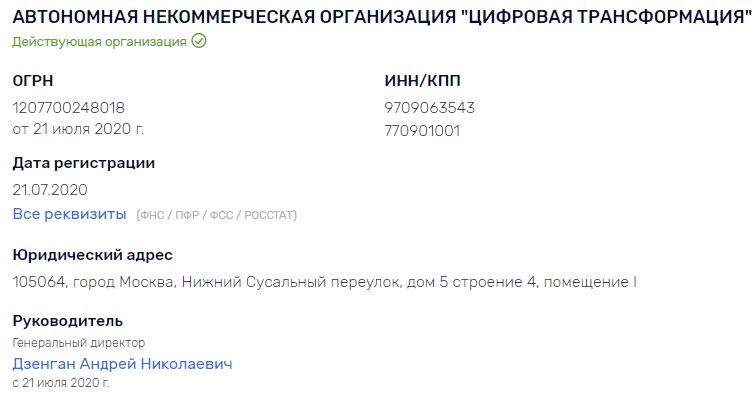 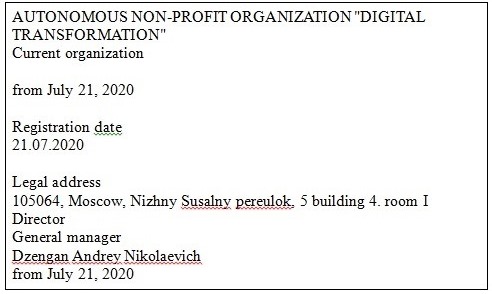 Dzengan at the head of the ANPO

All: Dzengan, his former boss Lysenko, Drozdov and Ivanov - such is the likely tangle of connections with the corruption smell that Sergey Gordeev and Vasily Vasin, who prefer to stay in the shadows, could leave behind them, isn't it? And they can do it. In articles about the scandalous criminal case of the PFRF and Redsys, their names do not yet sound as they might.

Most likely, the whole thing may be in the huge volume and resonance that the story with their older comrades, the Ananyev brothers, received. But they should not be forgotten. If they stole themselves and helped the Ananyevs in unseemly cases, law enforcement officers will certainly have questions to them. The only question is whether they will want to hide abroad and will have time to do so like the Ananyevs.