No one needs "toxic" Tinkov?

Not only Oleg Tinkov's deal with Yandex, but, it seems, the Tinkoff Bank itself can fall apart, can’t they? And the aggressive desire to sell it to at least someone reveals the scandalous banker.

Negotiations of the owner of TCS Group Oleg Tinkov  on the sale of Tinkoff Bank to the Russian IT giant Yandex ended in complete failure.

And not just a failure, but a real scandal. According to the correspondent of The Moscow Post, both sides have announced the termination of negotiations on the deal now, which could amount to $5.5 billion.

As a result of the negotiations, Oleg Tinkov allegedly wrote a letter to his employees, which he sent out by email. In it, Tinkov announced that he would not sell the Bank neither to Yandex, nor to MTS of Vladimir Yevtushenkov. Meduza writes about this.

Moreover, Tinkov in a frankly unfriendly manner called Yandex a word from the vocabulary that is not quite decent in an educated society, denoting one of the waste products of human life. It is curious, who will negotiate with him after this at all?

But most importantly, Tinkov said that he was not satisfied with the ideology of the deal - "purchase" instead of "merger". 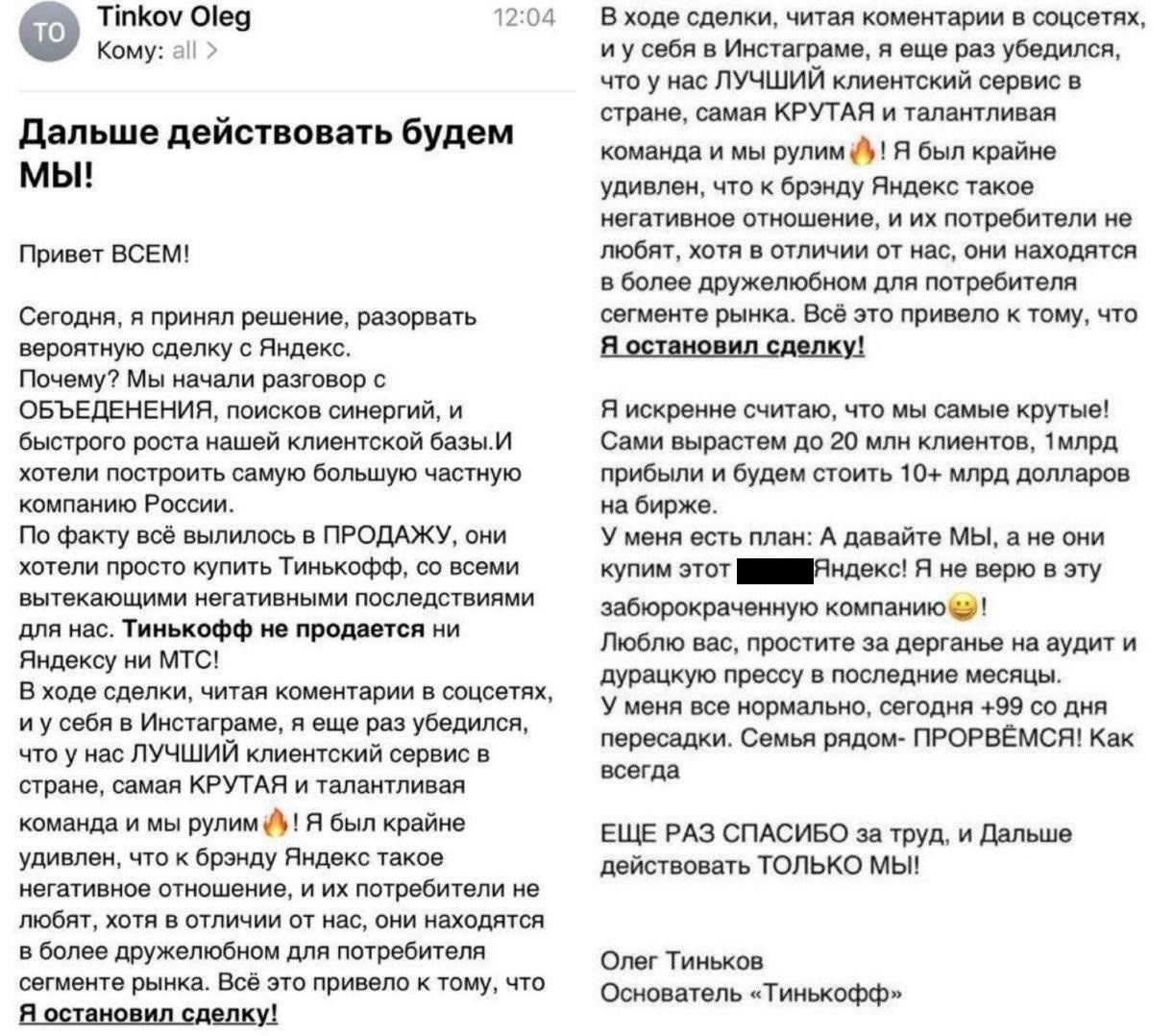 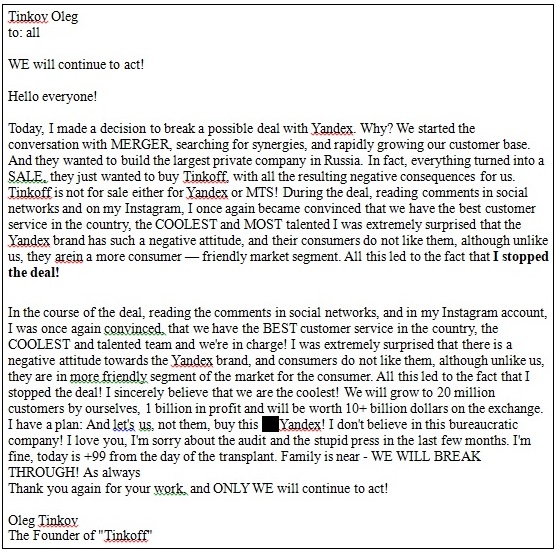 Presumably, Tinkov's desire to remain at the helm of the company after its sale to the IT giant could really be the sticking point. Does it mean that Tinkov did not just want to sell the Bank, but to sell the Bank with himself? Though the problematic credit institution can still be somehow corrected, the financial situation can be leveled, "toxic" Tinkov, it seems, cannot be changed, can he?

However, there are also doubts about the Bank. It is no secret for serious financial analysts that the structure has serious problems. That's why they don't sell a chicken that lays golden eggs. But this chicken may have neither gold nor ordinary ones soon.

The thing is that, first of all, in the high-profile case of Tinkov in the United States. Earlier, the US Department of the Treasury accused banker Oleg Tinkov, who was detained in London, of filing false tax information. The indictment consists of two items, he faces up to three years in prison due to each one. He can also be placed under surveillance, ordered to pay damages and pay huge fines. He could hide up to $1 billion in revenue, as RBC wrote.

Where will he get the money if not from the banking business? No one seems to wish to deal with him now.  Tinkoff has long resembled a huge bubble. Experts consider its policy extremely aggressive, and it issues loans even from borrowed funds. How are they provided? Candy wrappers?

This was especially noticeable in the first half of 2019. At that time, Tinkoff's loan portfolio grew by almost 100 billion rubles. Loans were issued, among other things, with funds that Tinkov borrowed from other banks. Forbes wrote about this.

As a result, Tinkoff repaid its debts after the SPO, but the trend is very eloquent. Growth for the sake of growth - is it not a "pyramid"? According to the authors of the Investing.com website, with reference to financial analyst Vladimir Chernov, allegedly "Tinkoff" gave loans to everyone.

Let's look at the Bank's indicators for the past year, from September 2019 to September 2020. Much becomes clear. During this time, the Bank Tinkov immediately fell by 20% return on assets-net. The return on capital also fell by 17.5%.

In addition, with the growth of credit ratios, the Bank's foreign exchange turnover to net assets fell by 100%. Did the Bank stop operating the currency, or decided to hide it from the US authorities to avoid new charges for its owner?

But even this is just the beginning - lasting for the whole year. And if we take the figures from February 2020 to September 2020, the Bank's net return on assets fell by 67%! The return on capital is also 67%. And this is with an increase in profits. Does it mean, in other words, that the Bank's assets and capital are no longer needed? One of the credit coefficients, H3, was also in the red. By the way, international rating agencies pay attention to it.

Further, this summer, right before the Bank's financial statements were published, its Risk Director Yevgeny Ivashkevich sold his stocks of the institution for $8.8 million. A message about the transaction is available on the website of the London Stock Exchange. Does Ivashkevich know any information due to which he went to cash?

Even without this, there are a lot of rumours about the Bank. Some of them seem outright nonsense. It is rumoured that entrepreneurs who are clients of the Bank have problems closing their accounts. Allegedly, they are offered to sign a document according to which they must pay 15% of their amount.

There are also known problems with the Bank's application - after all, Tinkoff does not have any physical departments at all! Therefore, when people have problems with connection, they lose access to their money. Kommersant wrote about one of the serious failures at the end of 2019. And that's probably not what investors like either.

What are the investors afraid of?

History shows that Tinkov sells his business when it is ready to fall apart. The investors are afraid of a "trap". Let's recall the bright cases.

Technoshok chain of stores by Oleg Tinkov. He created it in the 90's together with a chain of stores and the Music Shock production company. Both were sold before the 1998 crisis - the companies simply did not have a margin of safety. Both have vanished.

Darya pelmeni (dumplings). Tinkov created this brand, naming it after his daughter. In 2001, he sold the company to Roman Abramovich’s holding, just before the market was extremely filled with manufacturers of frozen foods. The production of pelmeni faded very quickly.

Beer business. More specifically, Tinkoff beer. In 2005, he sold the business to InBev beer holding. According to rumours, Tinkov received insider information about the imminent sharp increase in excise taxes, however spoke about the market prospects with the counterparty. Soon, the market stagnated. just because of the excise taxes. Tinkoff was removed from production. What is it, business acumen or banal dishonesty?

In the same money box - Tinkov's restaurant business. His beer restaurants were popular in several cities, but Tinkov quickly sold everything just before the 2008 crisis. And, again, they say, pretty painted prospects for purchasers, allegedly, already having insider information about the imminent collapse.

Now comes the turn of the Tinkoff Bank? But Yandex, JSFC Sistema and other big business power brokers are not fools at all. Selling them a troubled Bank with a bunch of supposedly unsecured loans, but in a beautiful package, and even so aggressively negotiating will not work. They have shown it.

No matter how much Tinkov tried to look like an insider, a business shark, the coolest and most advanced banker, in his heart he could remain the same receller from a St. Petersburg hostel. Despite the fact that now he has knowledge and opportunities. He talked about his past many times. But for serious people, his  assertiveness and strange charm (if this aggressive style can be called that) no longer works. Has he become too "toxic"?