No hurry to retire with Chemezov?

Isn't it time for the security forces to get interested in the Non-state Pension Fund named after V. V. Livanov? Namely, how the pension money of employees of the Rostec GC under the leadership of Sergey Chemezov turned out to be there. And where the money eventually went.

As the correspondent of The Moscow Post reports, the Region-Rossium group of businessmen Sergey Sudarikov and Roman Avdeev is preparing for a new valuable acquisition. At the end of last week, a subsidiary of the group, the investment company Leningradskoe Adagio, filed a petition with the FAS to acquire up to 100% of the shares of the Non-state Pension Fund Military-Industrial Fund named after V. V. Livanov.

NPF investors are employees of a number of strategic enterprises of the country that are part of the Rostec GC under the leadership of Sergey Chemezov. What can we say, even if one of the key founders of the NPF is PJSC Sukhoi Design Bureau, which is part of the United Aircraft Corporation (UAC) under the wing of Rostec.

It is rumoured that Mr. Sudarikov and Mr. Avdeev may act in the interests of the head of Rosneft, Igor Sechin. Who, they say, decided to thoroughly enter the pension sector. Back in early 2020, it was announced that the Sudarikov Region acquired the NPF Federation and intends to complete the merger of non-state pension funds owned by the Region Group and the Rossium Concern of Roman Avdeev, under the "roof" of the allegedly Rosneft-affiliated Evolution fund.

However, if someone believes that the Military-Industrial Fund named after V. V. Livanov. is a very valuable asset, they may be disappointed. According to evil tongues, the nature of the fund's work has long been reminiscent of a financial pyramid, and the desire to get rid of the structure can be a banal leak of a toxic asset, in which God knows what has been happening in recent years.

Despite this, the authorized capital of the fund alone is 150 million rubles. How people were brought there before is an open question. However, back in 2020, it became known that Rostec's own NPF with the same name began to attract customers for mandatory pension insurance.

The latter ones have already joined the NPF Rostec from, for example, the NPF Rosvertol. That is, Chemezov has been "seething" and "shuffling" pension assets for two years. And the possible "toxicity" of Non-state Pension Fund named after V. V. Livanov resembles another situation. In the second half of 2020, the same Region-Rossium Group closed a deal to buy the captive fund of the UGMK Perspektiva, Ural Mining and Metallurgical Company of Iskander Bokarev and Andrey Kozitsyn. The assets of the latter could be held through the scandalous Koltso Urala bank, to which both UGMK and one of the participants of the ever-memorable Region-Rossium group of Roman Avdeev are directly related. He entered the capital of the Koltso Urala through the Moscow Credit Bank controlled by him. And so, in January 2021, the security forces visited Koltso Urala.

As the Ura.ru publication wrote, the investigative actions were once again connected with a bribe charged by the investigative Department of the IC of Russia to the former chief of the Department of Internal Affairs of Yekaterinburg, General Igor Trifonov. However, the bank could also find something else - related to the work of Perspektiva. Was that why Sudarikov and Avdeeva got it not long before?

So what can now be behind the possible desire of Sergey Chemezov to abandon the services of the Livanov Foundation in favour of the new Rostec foundation?

As the Gazetа.ru newspaper writes, back in 2019, the Investigative Committee opened a criminal case on multibillion fraud. According to investigators, agents working for various NPFs were able to mislead about half a million people who had not previously bothered to transfer their savings to non-state funds.

There are no specific persons involved, no specific funds in the materials about this case that have been published in the media. Then what does the Livanov Foundation have to do with it? As the deputy of the State Duma Valery Rashkin writes, at the beginning of 2020, he was approached by investors of the NPF Military-Industrial Fund named after V. V. Livanov from the Arkhangelsk and Sverdlovsk regions.

The truth that they are depositors, they learned only from the corresponding letters of happiness, where it was reported that their savings, without their knowledge, mysteriously flowed into this very NPF, which they had never heard of. This was the essence of their appeal to the deputy - to understand what happened. Rashkin's words are quoted by the Echo Moskvy website.

As Rashkin continues: "it turned out that during the years of the "pension reform", which did not bring any positive results, right in front of the state and law enforcement agencies, there was a whole system that allowed robbing trustful citizens." On our own behalf, we add that the Livanov Fund could well have fallen under the distribution of the investigators who opened a criminal case in 2019 - if the words of the depositors who turned to Rashkin are true.

Further, more. As Rashkin reports on the same Echo Moskvys website, it turned out that "in terms of the applicants' arguments (the criminal case was initiated on the statements of unnamed depositors of such NPFs) that the victims of fraud with pension savings of citizens may be employees of the Russian strategic enterprises Ilyushin and Sukhoi, who are depositors of JSC Military-Industrial Fund named after V. V. Livanov and JSC Analytical Centre Management Company, a copy of the appeal was sent to the Ministry of Internal Affairs of Russia in Moscow, the information provided is being checked."

Are the security forces close?

Is it because of this that the structures subordinate to Rostec, such as PJSC Sukhoi (a state-owned strategic enterprise!), which are part of the NPF on the rights of founders, have become fussy? And then Chemezov himself could fuss, and ask Avdeev and Sudarikov to help with the leak of the now toxic NPF?

What is even more interesting is that the head of this NPF named after Livanov is Olga Lapina. It seems to be a well-known merchant, but here she acts as a co-owner and founder of several ones at once, which somehow work with pension savings. Some of them have signs of fictitiousness. And could the depositors' money have flowed through them, say, abroad?

Among the companies, attention was drawn to the already named JSC Analytical Centre MC. It is engaged in the activities of exchange intermediaries and brokers. It is already interesting, and this is with 35 million rubles of authorized capital for as many as three employees. And the majority co-founder, together with Lapina, is Aviafinans LLC.

And, apparently, the finances of the structure literally "flew away". Because Aviafinans has not made a penny of profit since 2011. At the end of 2019, revenue is zero, the loss was 284 thousand rubles, and the value of assets, attention, minus 138 million rubles - about 14 times more than the authorized capital of the office (10.5 million rubles). Where's the money? 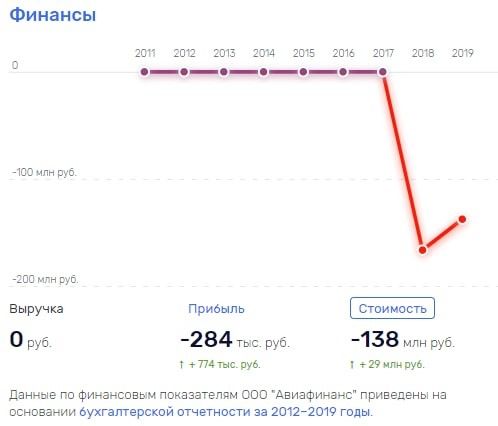 It seems that since 2017, assets could have been withdrawn from the company. Do Rostec enterprises work with such companies?

The co-founder of Aviafinans, in turn, is CJSC Centre for Analytical Planning and Financing. Similarly, not a penny of profit since 2011 - only losses. Zero revenue at the end of 2019, a loss of 400 thousand rubles. And, curiously, not a single employee in the state with an authorized capital of 9.5 million rubles.

In addition, according to the information from the Rusprofile service, the company registration address is the address of mass registration of legal entities (that is, ten companies can sit in one office two by two - isn't it strange?). However, even this information is unreliable, the company's reliability is indicated as low.

Doesn’t it seem that the security forces should be interested in these companies? According to the authors of the Crimerussia website, they allegedly became interested. Moreover, allegedly specifically in Lapina. We quote: "The Moscow Prosecutor's Office is investigating a case concerning a fraudulent organization from the NPF Military-Industrial Fund named after V. V. Livanov.

And here is what the authors of the website, with reference to their "insider", attribute to the office. First: allegedly depositors' money are invested in something that is not clear, "are eaten", left firms for left people are created, property is written on left individuals. Second: they allegedly deceive depositors, because the company is doing badly, this is allegedly a "blown bubble".

Third, it is as if audits are passed through the fingers. Let's say for ourselves - were there any of them at all? Not a single report is publicly available. Fourth, allegedly Lapina and others buy real estate with the money of depositors, they posh. And to have such an opportunity, fifth, allegedly forge the signatures of depositors and, attention, illegally transfer depositors in the regions.

All this could become a very serious accusation, and needs to be confirmed. Apparently, this is what law enforcement officers are now doing, because if at least one of these things is true, the entire vertical of the Livanov Fund is waiting for problems. And will they get to Chemezov, since Rostec companies worked hand in hand with the organization?

However, the security forces should have long been interested in what was happening in the Fund. In the summer of 2020, they detained the director of the Information Security Department of the Military-Industrial Fund n. a. Livanov, Alexander Askerko. According to REN TV, he was arrested for illegal arms trafficking. They found a pistol, a Kalashnikov assault rifle, and a device for silent shooting... What good managers there are in the Fund...

Thus, if you add two and two together, it is easy to guess why the Livanov Fund suddenly started moving. Why do Sudarikov and Avdeev suddenly appear in the arena, and express a desire to buy an extremely problematic organization, while Chemezov seems to remain in the shadows. There are a lot of scandals, and soon the skeletons may begin to fall out of the cabinets. And then those who could be wise with the funds of depositors, will wait their own pension in places not so remote.