Can odious "golden baron" Konstantin Strukov do business on buying up gold mining assets with the money of Russian taxpayers, and even enter into conflicts with the Federal Tax Service?

As the correspondent of The Moscow Post reports, Vice-Chairman of the Legislative Assembly of the Chelyabinsk region, and also a billionaire, owner of JSC UGC gold miner Konstantin Strukov could make a good deal. Allegedly, Gazprombank gave him a huge loan of $390 million.

The most interesting thing is that there is no indication of the purpose of the loan, and the agreement on the pledge of stocks of its Ugold Ltd, it seems, was issued retroactively - on February 1, 2017. Why, then, did the amount of any loans not appear in it until June 20, 2020? And another important detail - according to the authors of the Russian Press telegram channel, the deal was allegedly carried out by Cypriots, namely, the law firm Patrikios Pavlou & Associates LLC.

Just now, when this information has surfaced, there is a large-scale corporate conflict around the gold miner Petrpavlovsk. Against this background, rumours are growing that Strukov is not such a decent entrepreneur as he wants to be thought of, and he may appear to be ordinary raider.

Taking into account that Gazprombank supposedly give loans to Strukov, the latter can be engaged in getting of attracted businesses on the money of the "national treasure"? 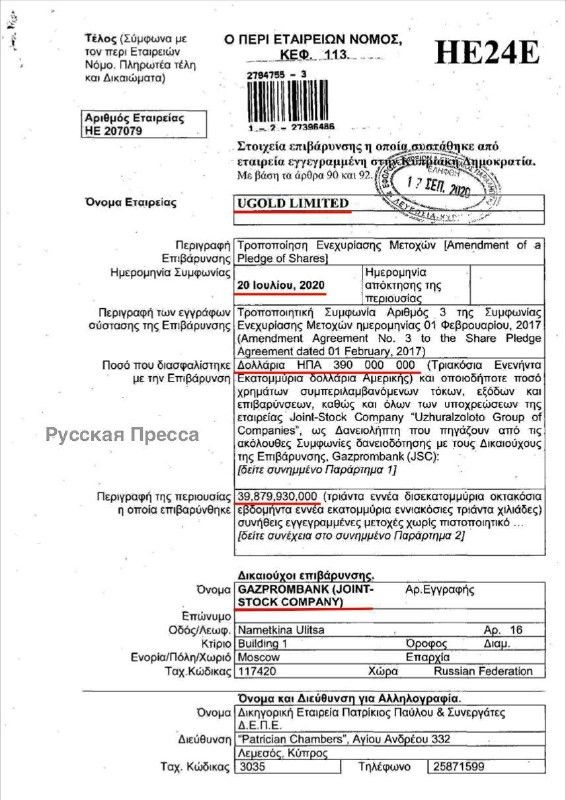 Сould part of the allegedly close to Strukov Ugold offshore go as collateral for a loan from Gazprombank?

Now Strukov is surrounded from all sides. There is information that he may not have been in Russia for a long time. In September, the Federal Tax Service charged Strukov with billions of dollars in debts in the Kemerovo and Chelyabinsk regions. Pravda UrFO wrote about this.

At the request of the Federal Tax Service in the Kemerovo region, both the money and property of Strukov and his daughter Yevgenia Kuznetsova have already been seized in the amount of 1.5 billion rubles. With - Strukov’s Yuzhuralzoloto Group of Companies (SGC) and the Meltek company have faced the claims of tax officers.

As it is known, the process of bringing to subsidiary responsibility can take a long time. During this time, Strukov can withdraw money from his assets, including loans issued by Gazprombank. There is a high probability that the process has already started.

For example, a subsidiary of Strukov’s Meltek - Stepanovsky Razrez LLC, at the end of 2019, received a loss of 1.9 billion rubles. And this is just one example out of many.

What is happening in Strukov's companies now, only he knows and, perhaps, his long-time close partner, a native of the infamous PIK GC and Rosbilding, Vladislav Sviblov.

The latter is called by detractors almost a specialist in acquisitions, and Strukov is given a secondary role in their hypothetical tandem. According to rumours, he is behind the conflict in the Petropavlovsk GC. He was also one of the company's prominent shareholders. But, apparently, decided to go into the shadows.

What happened to Petropavlovsk?

Initially, there was no sign of trouble for the founder of Petropavlovsk Pavel Maslovsky and other shareholders. They saw no danger in the fact that 22.7% of the company was bought by the famous Russian oligarch Roman Trotsenko. It is unlikely that any of them would have entered into a deal with Strukov, knowing his reputation. But it was Strukov's Yuzhuralzoloto Group of Companies (UGC) that Trotsenko sold his stake to. This was the starting point.

In February, UGC became the owner of Petropavlovsk convertible bonds by 5.97%, becoming the largest shareholder. Maslovsky and other owners began to have serious problems.

In the summer of 2020, members of the Board of the UK-registered Petropavlovsk gold mining company asked the local regulator (the Takeover Commission) to conduct an investigation after shareholders had voted against the re-election of seven current company executives to the Board of Directors on June 30. RBC wrote about this.

The Board of Directors recommended that Pavel Maslovsky, the company's Executive Director and founder, be re-elected. Four groups of shareholders opposed their appointment: OJSC UGC, controlled by Konstantin Strukov, aliance of Everest and Slevin (together - 12.09% of the votes), as well as Vladislav Sviblov’s Fortiana Holdings (4.62%), who is the owner of the Lake Polymetallic Deposit in Buryatia.

Already in August 2020, Pavel Maslovsky was forced to leave the company. This was reported by TASS. And his place, clearly with the filing of Strukov and Sviblov, was taken by Maxim Meshcheryakov. The same month, he tried to enter the Moscow office of POX Hub (part of the Petropavlovsk GC).

Security did not let him in, but in the end, the young men who came to the office helped to get there. Employees of the POX Hub openly, without fear, call it the seizure of the enterprise. Rosguard arrived at the scene, Kommersant wrote about it.

As a result, Maxim Meshcheryakov opened a criminal case of arbitrariness. RBC wrote about this. The question of whether he could have acted without the sanction of the largest shareholders, and, first of all, Strukov, remains open. Besides, for what purposes are such crude methods needed now? But some media  are missing an important detail.

Almost immediately after the August incident with the raid on the POX Hub office, the ever-memorable Gazprombank suddenly took on the encumbrance of Konstantin Strukov's debts in Kiselevsky Razrez LLC and Sibenergougol LLC. Who could have thought it?

But wait, how could the state bank, after such a difficult situation inside Petropavlovsk with a conflict of shareholders, as well as a subsequent visit to the POX Hub, easily support such an odious oligarch? This may indicate that the state bank is very supportive of Strukov's business. Why?

And, by the way, these are not the only Strukov’s companies whose shares are pledged in Gazprombank. In particular, the share of JSC UGC in the subsidiary of Sovrudnik LLC has been pledged to the Bank since October 2018. This is one of Strukov's key profitable businesses with revenue of 14 billion rubles and a profit of 1.3 billion rubles.

Isn't it time, taking into account all these circumstances, to ask Head of Gazprombank Andrey Akimov serious questions? What are the grounds for taxpayers' money (after all, this is a state bank!) get into the company of a person who may be involved in raider attacks?

There is another point with POX Hub. It is a shareholder of JSC Yamalzoloto, which is currently undergoing bankruptcy proceedings with a claim amount of 1.8 billion rubles. This is reported by Pravda UrFO. Perhaps they are related to obligations to the structure of one of the founders of Petropavlovsk, Maslovsky, who previously fought for this business with Viktor Vekselberg.

It is rumoured that there is a high probability that the same Pavel Maslovsky is behind JSC Yamalzoloto through a whole chain of persons. It turns out that Maxim Meshcheryakov could have another serious reason to get the POX Hub under his control. After all, then in his hands (or the hands of Strukov and Sviblov?) there would be documents of JSC Yamalzoloto.

By the way, Meshcheryakov also did not come from nowhere. There is a criminal case against him, however, once he was the CEO of the Bonum Management company, which could be associated with Senator Suleiman Kerimov. The latter often acts as an intermediary in serious transactions. Already mentioned Roman Trotsenko could perform in the case of Petropavlovsk in the same form. That is, Strukov or his patrons know how to select personnel…

Probably, they are doing very well with solicitors, and they get it quite well with lawyers in general - they work properly. Strukov may need lawyers, and maybe even solicitors, very soon. First, the FAS is already interested in the purchase of Petropavlovsk by Strukov. There has been a complaint on the trade procedure in respect of UGC, as TASS wrote.

And secondly, Petropavlovsk is registered not in Russia, but in the UK. And, according to our information, it is there, in the High Court of London, that Pavel Maslovsky plans to seek the truth in the conflict with Strukov and the forces supporting him. This means that if Strukov decides to escape from tax claims from Russia, he will not be given a hospitable welcome abroad.

03 June, 8:24
Well, a very enriching plant: who entered the battle for the Kimkano-Sutar GOK and its state money
See also