What can the new construction of Igor Sagiryan's family turn out to be?

RKS-Development is going together with Invest AG of Evraz shareholders Alexander Abramov and Alexander Frolov a large-scale construction (about 100 thousand square meters of housing) in Nakhabino (Moscow region). The correspondent of The Moscow Post in the Moscow region understood how much we implement the project with such a partnership.

There is no money, but we are on loans

To implement the project, RKS Nakhabino LLC was created in October. Shares in it are distributed between YURP Invest Abramov and Frolov and RKS Development of the family of financier Igor Sagiryan. Shares of the second founder under the encumbrance of Sberbank.

Another structure hypothetically related specifically to the planned construction is the RKS-Nakhabino SZ, created in 2021, also designed for the Development RKS structure. In this company, the share of the founder in the pledge from the Moscow Credit Bank.

The debt burden of the structures is, of course, not a crime in itself, but indicates the likely lack of financial reserves among companies.

Taking into account the fact that literally this year the offshore company VALYUSTAGE TRADING LIMITED was withdrawn from the structure of the parent RKS Holding itself, suspicions arise that earlier money could be withdrawn from it and its affiliated structures.

Professional enlarger of his own "Welfare"

According to our information, the latter may have been abroad for a long time, and rewrote his shares to relatives and friends in order to avoid sanctions. This extremely ambiguous personality could previously be related to the withdrawal of money from the non-state pension fund "Welfare," in which Russian Railways employees invested in a "voluntary-compulsory" manner. The Moscow Post covered the story in detail.

Sagiryan also worked in the Troika-Dialog structures, which in 2010 became a defendant in a criminal case related to over-the-counter transactions with affiliated companies. In addition, according to RBC, Troika Dialog worked with a network of more than 70 offshore companies through which money was withdrawn from Russia.

Sagiryan is also credited with actively participating in the withdrawal of 5.4 billion rubles from the Russian Federation through the Hermitage Capital Management fund, which belonged to the Renaissance Capital group at the time when Igor Sagiryan was "driving" there. And, although Renaissance disowned what happened, according to Forbes, Sagiryan actively negotiated with the former manager of the Moscow office of Hermitage Capital, William Browder. Allegedly, they even met and discussed the liquidation of the companies involved and the destruction of documentation.

There were other episodes in Sagiryan's biography that could potentially become the basis for the criminal prosecution of a merchant.

For example, a partnership with a scandalous developer - the head of the Barkley company Leonid Kazinets. RKS "Development" together with "Barkley" last year expressed their intention to take on the redevelopment of the headquarters of "Russian Post" on the Warsaw highway in the center of Moscow.

In fact, the big question is what will happen to the long-suffering building, because both firms have no experience in redevelopment, and Kazinets has barely completed the Honey Valley residential complex, the scandal around which has not been going off the media for several years. 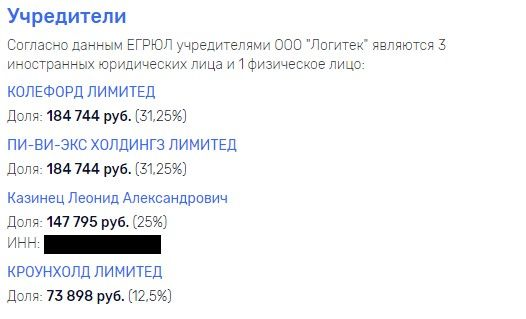 At the same time, offshore companies in the structures of Kazinets are a familiar matter. Isn't the money of equity holders and creditors leaking there? Photo: https://www.rusprofile.ru

Not only could the equity holders not wait for completion for years, but also the counterparties, according to information recently received by The Moscow Post, were "at the broken trough" thanks to cunning schemes for concluding contract agreements with them.

At the same time, Kazinets himself, on the contrary, blames contractors for everything and even files lawsuits against them, the total amount of which has already exceeded 1 billion rubles. But the way contractors one of the other "pour" on the Kazinets project may indicate the unscrupulousness of the customer rather than one track of hired organizations.

For example, recently the Barkley structure sued 41 million rubles from Planet UWC LLC for failure to comply with the terms of the contract. In its place was put "Energogazstroy," which very soon was also mired in litigation. According to the authors of the Maksapark website, Kazinets allegedly has threats in his pocket and the use of the Federal Migration Service, which allegedly discovers illegal immigrants at construction sites to put pressure on contractors.

Kazinets may also have connections in the Moscow mayor's office. It is known that 10 years ago he took the post of assistant to the mayor Sergei Sobyanin. And now he is actively putting forward proposals to improve communication between developers and clients. True, basically, they relate to how easy it is to get a signed equity agreement from the consumer.

It is likely that all the "tricks" come down from the hands of the unfortunate developer precisely due to the location of the permanent mayor. Thanks to the same, Kazinets can receive more and more new territories for development.

In 2020, Barkley stood up for the construction of a technopark on the territory of the Tagansky Meat Processing Plant (TAMP) in southeastern Moscow. A large project that involves non-strong preferences from the Moscow leadership.

In conversations about "Barkley," you can often hear the word "destroyer." Two stories related to the deplorable fate of historical buildings, which Barkley undertook to stop, are indicative.

In Lavrushinsky Lane in Moscow, a dilapidated building caught fire not so long ago, as a result, the "House of Writers" was damaged - water penetrated there, the walls cracked. And the burned-out house was demolished, and a residential high-rise building was erected in its place. Earlier, city defenders opposed the construction, so the conclusion suggests itself that it was with the filing of Kazinets that a fire could have been provoked, which actually left no choice.

As "General Newspaper" writes from the words of one of the residents of the "House of Pisataley" Ruslan Oleshevich, the construction went with gross violations: allegedly "Barkley" had to provide permission and all the necessary documents, strengthen the wall of the house and then only begin construction, but this was not done.

Another similar case occurred during the construction of the elite Barkli Gallery complex in the immediate vicinity of the Tretyakov Gallery. According to the authors of the Live Journal website, allegedly the demolition of historical houses in Orda Lane, which preceded the construction, were illegal, but the mayor's office did not do anything about it. As a result, the apartment building of the merchant Kuznetsov was demolished.

The fact that Abramovich's structures are invested in the business of the Sagiryan family, and the shares in the pledge of the ICD, can speak of, to put it mildly, the precarious position of his structures. And the capital's authorities are calmer - and suddenly they will not "grow together." Who will answer?