It seems that winemaker Aslanbiy Nagoy finally says goodbye to both money and business, which could have been started by cooperation with the odious Kuban banker Viktor Budarin.

Viktor Budarin, or rather the Kuban Credit Bank that belongs to him, won another judicial victory. This time, the "defeated" was the farm of Krasnodar entrepreneur Aslanbiy Nagoy, which demanded 10.3 billion rubles of lost profits from the Bank, the Ministry of Finance and the Ministry of Internal Affairs as a result of taking interim measures in the "Kuban Credit" claim. The Arbitration court of the Krasnodar region refused to satisfy the requirements.

We are talking about a lawsuit against Yubileynaya LLC winery, owned by Nagoy, and now declared bankrupt and put up for sale. The winery was bankrupted as a result of a chain of events to which Budarin may have a direct connection. And these are not the only complaints about it. The correspondent of  The Moscow Post studied the situation.

Viktor Budarin is one of the most influential businessmen in the Krasnodar region. So much so that detractors call him almost a "shadow governor" and a "wallet" of local officials. According to rumours, he enjoys the favour of the head of the region Veniamin Kondratyev. Can this be the secret of his success?

Yubileynaya winery is one of the most valuable assets of the region. It is the brainchild of Aslanbiy Nagoy, an ardent fan of the wine business. In 2016, he borrowed 250 million rubles from Budarin's Kuban Credit to modernize production. Then he had problems - the market situation changed, new rules of state regulation were introduced. And Nagoy, to his misfortune, was "credited" by Budarin's again. And the latter was certainly happy.

In 2018, something happened that Nagoy could not have foreseen. Budarin's Bank, as Kommersant wrote, suddenly demanded to repay the debt of 700 million rubles ahead of time. It is the word "ahead of time" that is important here, because if the Bank executed the contract, the winery that produced up to 10 million bottles of wine a year could easily pay off.

Shortly before that, the winery signed 3 contracts for $12 million, which were supposed to make the company rich. And in 2017, it earned as much as 576 million rubles and became the country's leader, along with such companies as Fanagoria, Abrau-Durso and Kuban-Vino. But the demand of "Kuban Credit" seems to have undercut the rising business.

To get the asset out of harm's way, Nagoy, unable to pay the money immediately, declared bankruptcy. Apparently, Budarin didn't like it. Suddenly, a criminal case of deliberate bankruptcy was opened, and Nagoy found himself under house arrest. In June 2020, the case went to court. RBC wrote about this.

The whole situation with the collapse of Nagoy’s business could have been provoked by Budarin in the interests of other owners of the wine business. As Kommersant wrote, there were purchasers for the bankrupt asset - it can become Abrau-Durso of the family of business Ombudsman Boris Titov.

In addition, Nagoy himself intended to sell his business for 6 billion rubles, taking into account the volume and income of the business. However, now because of this whole situation, the sale price will probably be lower. Was this what Budarin and Titov were counting on, assuming that they had agreed?

Meanwhile, according to the authors of the Obshchestvenny Nadzor website, allegedly the lawyers of Nagoy realized too late that Budarin's Bank could specifically split the loan portfolio in order to catch the debtor on re-loans. This could have prompted Nagoy to declare bankruptcy and then sell the businesses. Roughly speaking, Nagoy could be put on a credit hook with admonitions, and then the trap was closed.

This story is not new - there were many similar cases in Russia. However, there are few regions where interested parties act so openly, as if they have a serious "roof" at the top. But Nagoy didn't give up. He wrote an open letter to Vladimir Putin, where he called Budarin the creator and head of an OCG that has been operating in the Krasnodar territory for about 20 years. 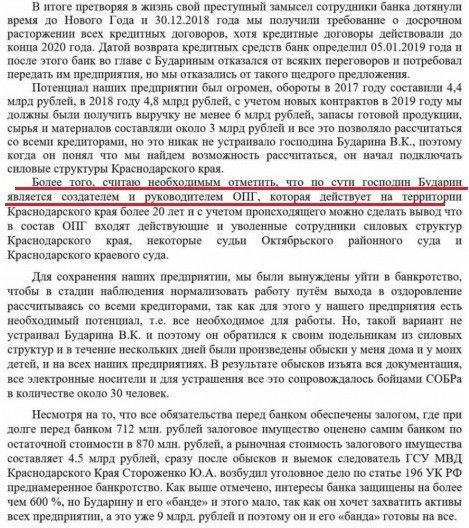 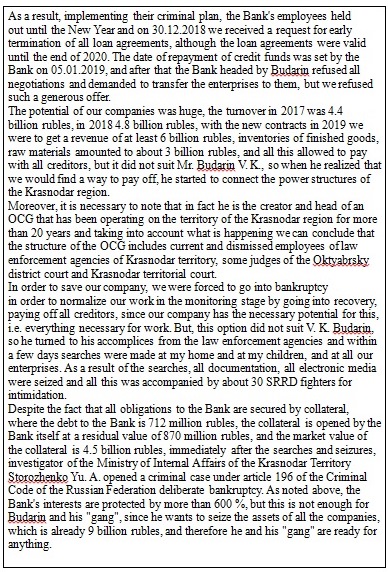 An extremely serious charge that has no real judicial confirmation. However, many who were not lucky enough to have anything to do with him might agree with Nagoy's opinion of Budarin. Nagoy believes that Budarin may act in collusion with law enforcement agencies, which were allegedly simply incited on the businessman to open a criminal case.

Meanwhile, something very strange has been happening in Budarin's Bank for the past year. It seems that money is either being withdrawn from it, or the real state of affairs is being hidden there. The period from July 2019 to June 2020 (when the conflict with Nagoy came to an open stage) is indicative, when 20% of the Bank's profit "disappeared" somewhere with the nominal growth of assets.

More important is the collapse in return on assets (by 17%) and return on capital (18%). In addition, during this period, the Bank's foreign exchange turnover fell by 100% (!). This is not something that can be  remembered among other banks in the country. Has Viktor Budarin's Bank completely stopped conducting operations with currency? Why would that be? Or was the currency hidden far away during the crisis, for example, in offshore accounts abroad?

Kuban Credit is not the only asset of Budarin, in which, with huge infusions, something incomprehensible happens with profitability and other indicators. Lat us have a look at his KSMK-Region. At the end of 2019, it received almost 530 million in revenue, but was in minus by 20 million rubles. Question - and where, in fact, did the revenue go with such a difference?

But KSMK-Region had a profit - once. What can't be said about Budarin's other company, Vev Agro LLC. At the end of 2019, the company did not have a penny of revenue, but a loss of 126 million rubles. At the same time, the book value of assets is minus 238 million rubles.
Why is such company that looks more like an "intermediary" needed? To tranfer the assets that have appeared in it, then withdraw them, and record the "minus" in the reporting, so as not to pay taxes? However, these questions should be answered by the competent authorities.

Budarin companies' cooperation with courts is also interesting. Can it be the reason why they are so supportive of him, especially in light of the latest decision of the Arbitration court of the Krasnodar territory?

The fact is that Budarin's company Firm Gradresurs LLC often receives state contracts for the provision of services to various structures, including this court. We can recall the contract from 2012 for 2.5 million rubles. According to rumours, Budarin was also well acquainted with the Chairman of the regional court Alexander Chernov, who left his post in 2019.

Of course, in another region, these cases would have been brought to the attention of the competent authorities. But it seems that in Kuban Budarin was turned on the "green light". According to rumours, he is very friendly with head of the region Veniamin Kondratyev. So much so that evil tongues claim that Budarin is a kind of "wallet" where Kondratyev can hold assets that he does not want to shine in the official Declaration.

Back in 2017, last year, the Association of employers of the Krasnodar region, headed by Budarin, and Kondratyev signed a large-scale cooperation agreement, under which they decided to jointly create a favorable investment climate. This is also stated on the website of Budarin's Bank.

Kondratyev recently met with representatives of the Russian Union of Industrialists and Entrepreneurs, whose regional Department is headed, again, by Budarin. Isn’t there too much attention for him, and aren’t there too many structures tied on the wrong person in the Kuban?

And in 2018, Budarin and Kondratyev began to solve the problems of defrauded shareholders, for which they attracted Budarin KEKS LLC. According to rumours, solving some problems, he created others - allegedly broke deadlines, and, according to evil tongues, could pour gallons of sewage into the Tamernik river.

To sum up, Budarin's relationship with Kondratyev seems to be special. Banks and law enforcement agencies often side with the banker. Can Budarin do what he wants in Kuban? This does not fit in with the development of the investment climate, nor with banal logic and decency. But, judging by the situation with Nagoy, no one thinks about decency there.