Mr. Privatizer and his methods: a new wave of mass purchase of assets began for Vladimir Potanin

Having managed to spoil and restore relations with everyone who could, Vladimir Potanin remembered the golden 90s, when everything was bought up for nothing.

Over the past week, rumors circulated on the market about the possible purchase of the Russian version of Forbes magazine by the owner of Interros, oligarch Vladimir Potanin. They turned out to be fake, but it seems that the entrepreneur is not averse to capitalizing on the assets of a business leaving Russia amid sanctions.

He has already bought Tinkoff Bank from its founder Oleg Tinkov. The latter said that he sold the package for a penny - and against the background of Western sanctions and freezing the assets of people enriched in Russia, it is not surprising. It seems Potanin is not averse to arranging a new redistribution of property. In the past, he succeeded, as exactly - in the material of The Moscow Post.

Today Vladimir Potanin is one of the richest people in Russia, a key beneficiary of Interros Group of Companies (MMC Norilsk Nickel, Rosa Khutor, Petrovax Farm), etc. In the Russian ranking of the richest businessmen in Russia, published in April 2022 by Forbes magazine, the businessman ranks second with a fortune of $17.3 billion. Despite the fact that over the year he lost $9.7 billion, his place in the ranking did not change.

He is one of the main beneficiaries of privatization of the 90s, the results of which are still in doubt for many

It was the current key beneficiary of Norilsk Nickel that was the author of the very idea of ​​ collateral auctions. He made his first capital in the trade in urea and then ore. And then he went to work at the state-owned International Bank for Economic Cooperation, where he met another prominent "privatizer" of future years - Mikhail Prokhorov.

After that, they founded Interross, where they applied the international communications developed in the bank. And after that they created two of their own banks at once - the legendary ONEXIM and the lesser-known bank International Financial Company.

In 1995, it was Vladimir Olegovich, together with a group of other bankers, who offered the state loans secured by shares of state-owned enterprises. The auctions were held, and on September 1, 1996, the pledge of shares received by banks expired. Huge state assets were in the hands of Potanin and people as visionary as himself.

One of the most active creditors of the native state was ONEXIM Bank, which our hero founded together with another future oligarch Mikhail Prokhorov. The main award was subsequently 51% of the shares of Norilsk Nickel from the very first collateral auction (initially Potanin received only 38%). Such a pleasure cost only $170 million - an absolutely ridiculous amount for such a giant.

But even it became the largest among 12 major auctions in 1995, when large shares in Yukos, LUKOIL, Sibneft, Surgutneftegaz turned out to be privatized (and the glorious names of Khodorkovsky, who is now recognized as a foreign agent on the territory of the Russian Federation, Alekperov, Abramovich, Bogdanov and respected citizens, immediately emerge in memory.

Norilsk Nickel was not the only major asset that sailed into the hands of Vladimir Potanin through the pledge bacchanalia. For this penny, he also managed to buy 51% of the oil company JSC SIDANKO, 20% of OJSC Novorossiysk Shipping Company, 14.8% of the Novolipetsk Metallurgical Plant, as well as OJSC North-Western Shipping Company. In the summer of 1996, structures controlled by the oligarch acquired a stake in Svyazinvest. 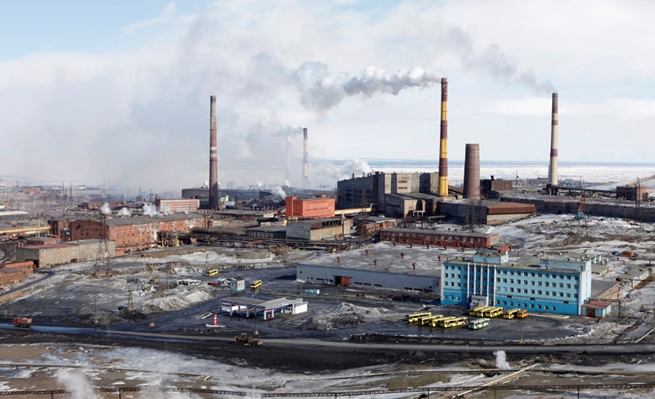 Norilsk Nickel (pictured) and other colossal assets were in Potanin's hands for ridiculous money. Photo: putevoditel-oz.ru

Huge shares in colossal assets went for almost nothing. And these are state enterprises that have raised generations of residents of our country for years - then still Soviet citizens. The oligarch himself was touched by the first deputy chairman of the Government of the Russian Federation - that is, he combined not only large financial resources, but also political power.

In the fall of 1997, the current main owner of Norilsk Nickel created the Prof-Media CJSC holding to manage all media controlled by ONEXIM Bank, including at different times such popular publications in Russia as Izvestia, Komsomolskaya Pravda, Afisha and Big City. 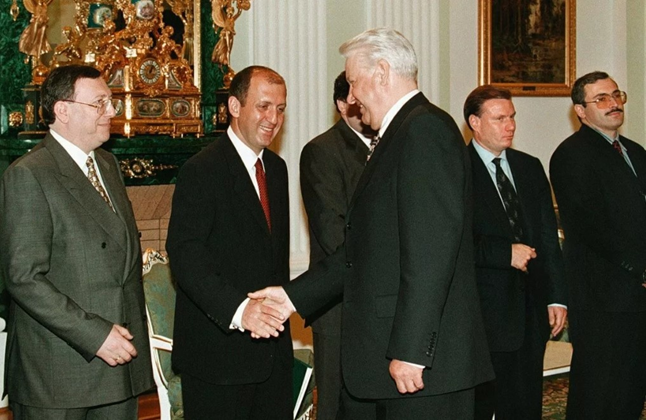 Vladimir Potanin (the second on the right) among new Russian oligarchs who are welcomed by the Russian President Boris Yeltsin. Photo: e-vid.ru

That is I received also media for the strengthened processing of the population, suggestion to it correctness of the "reforms" undertaken in new Russia.

To dump everything on Usmanov

Everything that was after - history. Only at the price of big losses and shocks in the country in the late nineties and the beginning zero the new President Vladimir Putin managed to clear public administration of oligarchs. But the property was already redistributed, it was impossible to arrange new repartition.

And already only after that, in zero and the tenth those oligarchs, including Potanin, Prokhorov, Abramovich and others, began to divide joint assets, to arrange almost business wars.

All remember that in 2007, after the whole series of scandals Vladimir Potanin managed to divide business with Mikhail Prokhorov - nowadays the resident of Israel.

The section of business with Prokhorov was another story. War of compromising evidences was put to use. In what only businessmen, through media controlled by them didn't accuse each other. Tell that business reached that Potanin's employees Released one compromising evidence on Prokhorov, and then all dumped on Alisher Usmanov's PR managers.

Here not without reason Alisher Burkhanovich said that in Russia there was only one oligarch who received everything for nothing.

What in our country happens to those who to be hit the power in the hands, Potanin well remembered on the example of Mikhail Khodorkovsky (it is recognized as the foreign agent in the territory of the Russian Federation).

Scandals and divorce with the spouse Natalya became separate "song". It turned out that the businessman not really wishes to share not only with the state, but also with own spouse. In the whole series of legal claims she tried to prove that property they acquired together in marriage, and it - as if it is poor as if a church mouse.

It proceeded for many years. As a result the owner of Interros won, "having seized" 6 billion euros from the former spouse. But in 2021 the British court allowed Potanin's ex-wife to have legal proceedings for property again. I wrote RBC about it.

Tell me who your partner

But a series of the conflicts with the oligarch Oleg Deripaska became the most memorable epic. We will note that, unlike Potanin, that initial large capital received on broker operations, and for this purpose I didn't use any bank structures with international relations.

The speech about corporate fight around Norilsk Nickel. Mikhail Prokhorov sold the package in structure (25%) just to Oleg Deripaska. Then owners of RUSAL and Interrosa arranged dismantling with length more than in a decade.

Each of them saw the future of the company in own way, the question of dividends became the main stumbling block: Vladimir Potanin insisted that the most part of profit has to be aimed at the development while Deripaska who is eternally burdened with debts counted on the maximum payments. To it to "a life holiday" some time also Roman Abramovich who sold the package in 4% to Potanin subsequently was related.

We won't retell in detail all peripetias of this epoch-making opposition. We will remind only that the new, third round of the conflict happened in 2018 when Deripaska didn't agree to exclude the duels mechanism.

What Potanin is told then is remarkable I began "to drive" to the ex-wife of Deripaska Polina Yumasheva that that conceded him the shares in Norilsk Nickel which got after the divorce with the businessman.

Namely the auction for repayment of shares of key owners of MMC - from the shareholders' agreement and also I drew on dividends of Norilsk Nickel till 2022 at the level of not less than $2.5 billion in a year against $1.5 billion offered by Interros.

And about Deripaska – it is rumored that Potanin "leaked" the USA information which as a result became the basis for imposition of a sanction against the owner of RUSAL. That is, formally they found out that Deripaska participated in investment projects in Sochi before the Olympic Games – that is state buildings. And mister Potanin who allegedly and could share information was the largest investor of those projects.

The same can be told about other bewitched partner of Potanin, Moussa Bazhaev. There is an opinion that Potanin's employees during his fight against Moussa Bazhaev for Norilsk-1 and Chernogorskoye fields allegedly told the Italian magazine Famiglia Cristiana of data that in the period of sanctions of Forte Village – the magnificent tourist complex located on Sardinia in the area of Santa Margherita di Pula, was acquired for 180 million euros brothers Moussa and Mavlitom Bazhaev.

After that in Italy the real scandal in relation to Bazhaev who was tried to be connected immediately with Russian government began. 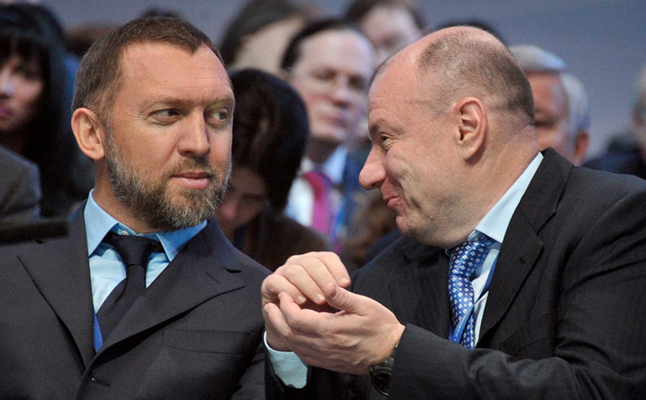 As the practice of the last 30 years has shown, appetite for Vladimir Potanin comes with food. And subsequently it does not fall, but only intensifies.

Moreover, the problems for our country do not end with the unfair distribution of the national heritage and income. Under the manager Potanin, major accidents occur almost annually, the largest of which occurred in 2020 near Norilsk.

The monstrous situation with the bottling of 21 thousand tons of fuel oil under Norilsk is a real environmental catastrophe in which the oligarch's Norilsk Nickel was to blame. As a result, the structures of the oligarch were ordered to pay a record fine in history for damage - 146 billion rubles.

It would seem, here's the bottom line. But Norilsk Nickel immediately announced that it was going to challenge the amount of damage. According to the company, there were allegedly inaccuracies in the calculation of the fine. If so, then it can be reduced by 20-70%, which is in sharp contrast to the oligarch's former statements about his readiness to be held accountable. As much as necessary, we will spend as much - he said then Forbes. It turns out, deceived?

Now for such as the owner of Norilsk Nickel, the time for opportunities has come again. When you can purchase serious assets at a reduced price, and somewhere for nothing at all. What, apparently, he is trying to do if we take as an example the same deal on Tinkoff Bank. But will the Russian authorities allow a new redistribution of property on unfavorable conditions for the country this time?