The owner of pharmacies that were attracted for trading without permission (licenses) will trade in Mordashov's stores.

According to the correspondent of The Moscow Post, the intention of Alexei Mordashov, a member of Severgroup, of the Lenta food chain, to change the current operators of pharmacy points to Aloe points Eduard Zakhrabekov caused outrage among participants in the pharmaceutical retail market, who believe that businessmen violated antitrust laws. The companies of Mr. Zakhrabekov were previously announced in a cartel conspiracy, as well as in the sale of medicines without the necessary licenses, and the entrepreneur himself became a defendant in a criminal case. Nevertheless, its structures, which receive billions from the budget, continue to actively expand.

The Russian Association of Pharmacy Chains (RAAS) reported that Lenta terminates contracts unilaterally, without explanation, and these actions may become an occasion for regulators to check. In total, with the easy hand of Mordashov, another 165 Aloe points will open in the food chain. The rest of the companies remained out of business, despite the fact that they rented space for more than a year, and invested in points.

It is noted that the partners did not discuss the new conditions of cooperation and did not explain the reasons for the termination of relations. That is why RAAS believe that the actions of "Ribbon" may become the basis for verification for limiting competition.

However, in which case, Mr. Zakhrabekov is not used to communicating with antitrust investors. According to Fontanka, the St. Petersburg OFAS of Russia recognized the cartel conspiracy in the actions of Baltic Securities Service LLC (BSS, controlled by Zakhrabekov) and Initiative LLC. In 2014-2015, a number of budget institutions in the Northern capital held tenders for the supply of medicines and medical equipment. The winners of nine auctions with a minimum reduction in the initial (maximum) contract price were recognized as either BSS or Initiative. Antitrust officials revealed that both organizations jointly prepared for bidding, had common contact e-mail and IP addresses.

In addition, the actions of the companies led to the receipt of illegal income in the amount of 89.6 million rubles, calculated in the OFAS. The antitrust case materials were transferred to the Main Investigative Directorate of the Investigative Committee of the Russian Federation, but the case was quiet.

Just like other cases in which Zakhrabekov appeared. Even at the beginning of the zero, he was accused of causing property damage by deception or abuse of trust, going through the so-called "case of Komzdrava." Then Tatyana Bogdanov, head of the department of pharmaceutical institutions and enterprises of Komzdrava, and Alevtin Frolova, head of the department of medical and preventive assistance to the population, and Lydia Beskaravaynaya, deputy head of the Central District KUGI, were accused of abuse of official position, Rosbalt reported.

In the fall of 2001, officials signed a letter that the BSS company was fulfilling state orders for the supply of medicines to the city, and Zakhrabekov received a rent benefit for the premises of his pharmacy on Nevsky Prospekt. Thus, the city budget could not receive 115 thousand rubles. 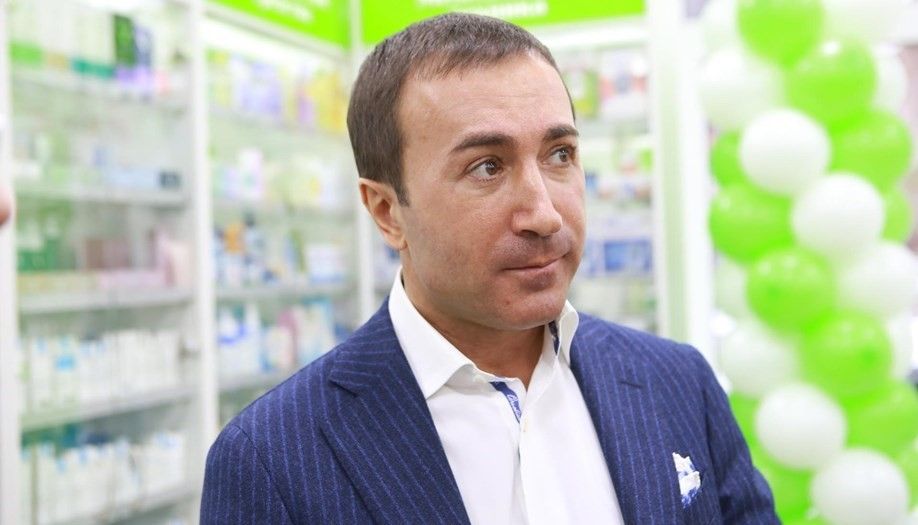 However, all four defendants were acquitted. Novaya Gazeta then explained this by the special status of Zakhrabekov as a leader "uniting the St. Petersburg pharmaceutical lobby." Also mentioned were the probably existing acquaintances of Zakhrabekov with many "authoritative" St. Petersburg entrepreneurs, including Vladimir Kumarin and now the late Konstantin Yakovlev. At one time, the figure of Zakhrabekov was even called as a possible candidate for the post of head of the Komzdrava.

The next time, Zakhrabekov came under the sight of law enforcement officers in 2009. The then deputy prime minister of the Karelian government, Valery Boynich, was suspected of lobbying for the interests of the same BSS in exchange for a bribe from its leader. According to investigators, the bribe was given in the form of a festive dinner in honor of the 49th anniversary of the official. The feast cost Eduard Zakhrabekov 55 thousand rubles.

According to some information, in exchange for a feast, BSS supplied medicines for beneficiaries to Karelian pharmacy centers as part of multimillion-dollar government contracts. At the same time, the Federal Law on Public Procurement allows you to purchase medicines with a shelf life of at least 60% of the originally established by the manufacturer. However, Boynich signed additional agreements with BSS, according to which this bar was significantly reduced, Novaya Gazeta wrote. Surely Zakhrabekov could make a lot of money from this!

However, for a high-profile corruption process, the restaurant account was clearly not enough, and in that case everything for the entrepreneur was successful.

But Zakhrabekov still receives state billions for state orders. At the moment, he is the founder of 31 organizations, many of which demonstrate phenomenal success. So, BSS itself has more than 145 billion rubles worth of state contracts, Murmansk Pharmacy LLC has 1.1 billion, BSS-Orenburg LLC - 347 million, On.k LLC - 2.8 billion. What to say, it is somewhat surprising that businessmen with such a past government agencies continue to be allocated funds... 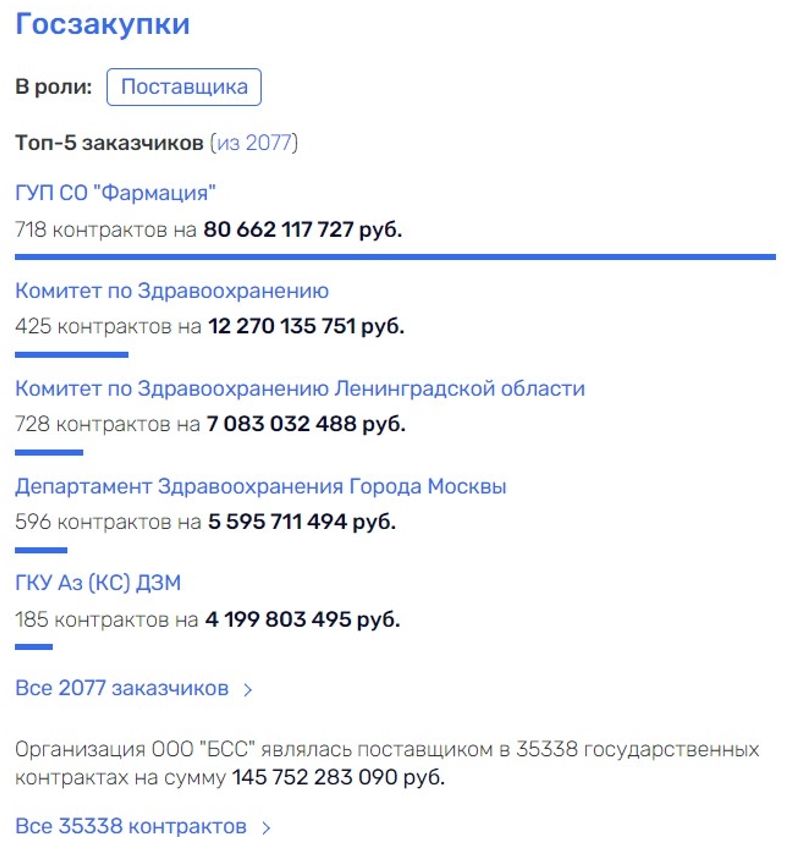 Moreover, for the fact that Aloe LLC itself, which manages the pharmacy chain of the same name, over the past three years, three applications have been filed immediately for administrative liability under Part 4 of Art. 14.1 Administrative Code of the Russian Federation - "Carrying out entrepreneurial activities with gross violation of the requirements and conditions provided for by a special permit (license)." Recall, for a second, we are talking about the trade in medical products and drugs! 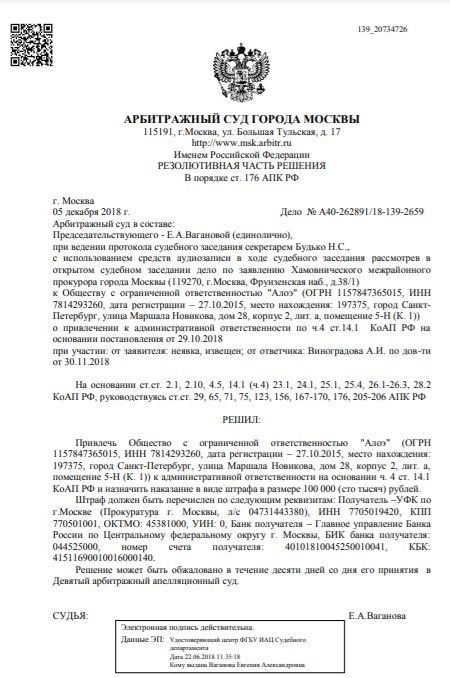 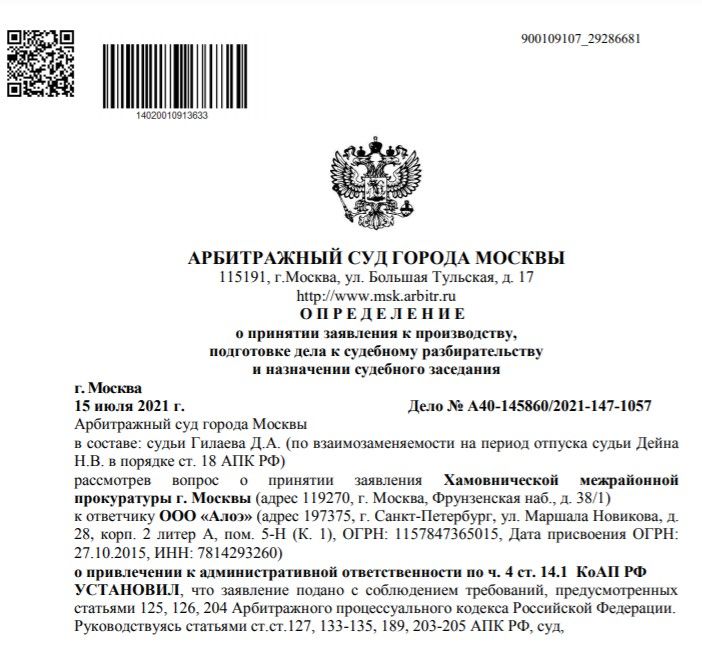 What is noteworthy, twice the instances of one metropolitan area were sent to the court. which may indicate that violations were not eliminated in any way. So, in 2018, a statement was received from the Khamovnichesky interdistrict prosecutor's office of the Central Administrative District and was satisfied - the organization received a fine of "ridiculous" 100 thousand rubles. And already in July of this year, the Khamovnichesky inter-district prosecutor of Moscow turned to the authority. According to the file of arbitration cases, last spring, according to the Basmanny interdistrict prosecutor's office of the Central Administrative District of Moscow, the company was also fined 100 thousand rubles for violating part 4 of Art. 14.1 Administrative Code of the Russian Federation.

However, it is unlikely that these amounts somehow hit Zakhrabekov - the same Aloe LLC, with revenue of 227 million rubles, has a profit of 5.2 million. And the same "BSS," for example, generally boasts revenue of as much as 36 billion rubles and profit of 620 million. In other words, Zakhrabekov has money, and there are many of them.

All this, however, does not prevent the entrepreneur from actively developing his business. In September last year, information appeared that the BSS Pharmaceutical Holding will develop the direction of cosmetology. In addition, back in early 2020, the company announced its intention to supply reagents for laboratory research in several areas, as well as funds for microbiological laboratories.

It would be interesting to know the secrets of Zakhrabekov's success - it is a pity that he did not mention them in any of the three books he wrote. Probably because that information is not for printing?